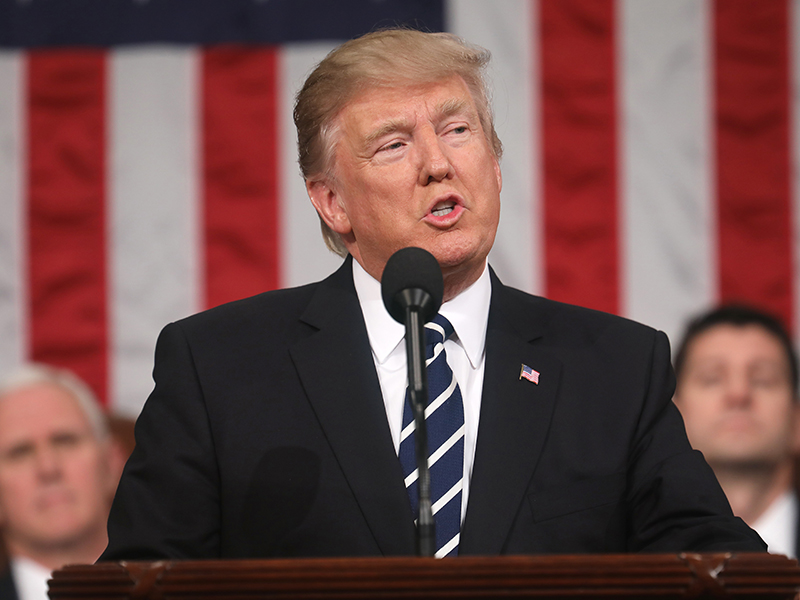 President Donald Trump delivers his first address to a joint session of Congress, on Feb. 28. (RNS/Courtesy of Reuters/Jim Lo Scalzo)

When President Donald Trump tweeted that Time magazine had contacted him about being named "Person of the Year," but that he had turned it down, a representative from the magazine said the president's tweet didn't have "a speck of truth."

Amazing. Not a speck of truth here—Trump tweets he 'took a pass' at being named TIME's person of the year https://t.co/D6SJgyTpcY

The next day, reports surfaced that Trump had been denying that it is his voice on the infamous "Access Hollywood" tape, in which he made vulgar comments about women. But when the tape was made public last year, he acknowledged it was him. Both can't be true.

Meanwhile, within a week, The Washington Post revealed that an activist organization had paid a woman to lie about being impregnated by Senate candidate Roy Moore when she was a teenager. The story was an attempt to expose media bias on the part of the Post if they had run with the false story, but the paper instead revealed the truth: that the abuse and pregnancy did not happen and the woman worked for an organization with the ironic name Veritas, Latin for "truth."

These recent three examples raise the question: Is lying wrong? Is it still — as Catholics would say — a sin?

Absolutely, say theologians and ethicists. As parents throughout history have pointed out, just because everybody's doing it, doesn't make it right.

The Catholic ethical tradition is clear that lying is morally wrong, and actually maintains that it is wrong in all situations, although some ethicists see some distinctions. But all agree that the consequences of lying are especially serious when done by leaders of social institutions, such as government, media or even churches.

Widespread lying — or perhaps widespread knowledge about lying, thanks to new media technology — can lead to cynicism, in which people assume that everyone is untruthful for their own self-interest, Fullam said.

This is not only sinful, but has dangerous implications for a democracy, where confidence in the honesty of leaders is critical and truthful knowledge is necessary for citizenship, Fullam said.

The problem of "fake news" and other untruths on social media even has caught the attention of the Vatican, which announced that Pope Francis will address the topic in his address for World Communications Day in May 2018. The theme will be "The truth will set you free."

The topic will be particularly apt for Americans, who spend almost 11 hours a day in front a screen, where their news is mediated by algorithms and companies that decide what they see, said Marcus Mescher, assistant professor of Christian ethics at Xavier University in Cincinnati.

"We live in a copy-and-paste culture, where things can be edited, taken out of context and photoshopped. There are so many opportunities for deception and distortion," Mescher said. "So it's all the more essential for us not to just be honest and transparent, but to hold each other accountable to standards of truth and reliability, and to discern what we are sharing or consuming is credible."

Mary Beth Yount, associate professor of theological studies at Neumann University in Aston, Pennsylvania, agrees that the ethics of honesty and dishonesty have not only individual but societal implications.

"Especially right now people in society don't know who to trust, who will speak for them and who cares for them," Yount said. "A lot of this comes from intentional deception, to sway elections, garner money in fundraising or political support, or even to promote readers or increase clicks. It's very challenging in our society to be truthful and trust that others are truthful." 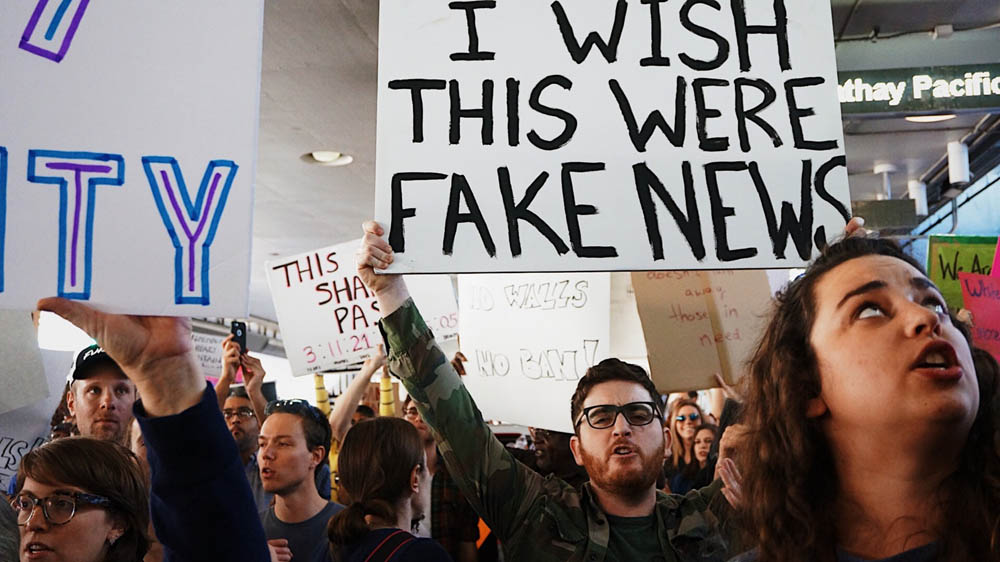 What the church teaches

Of course, "not bearing false witness against your neighbor" is one of the Ten Commandments, and the discussion of lying in the Catechism of the Catholic Church comes under the section on the commandments.

But much of the catechism's teaching actually comes from St. Augustine, who was the first to articulate the church's position on lying. "Augustine condemns lying under all circumstances," explained Julia Fleming, professor of ethics at Creighton University in Omaha, Nebraska. "He sees lying as a violation against God, who is truth. Human beings are to choose God above all things, including our physical survival or other desirable things."

So, according to Augustine, the ends never justify the means, and even lies that could save lives are considered morally wrong.

But St. Thomas Aquinas expands on that teaching. While maintaining that all lying is sinful, he makes the distinction that "not all lying is serious," said Fleming. The seriousness of the sin can depend on the actual act or the intention and/or the circumstances.

"When you aim to hurt someone, it's different from when you lie to help somebody," Fullam said. "The greater the good one intends by lying, the greater the sin is diminished in gravity. But it's still a sin."

The catechism's definition of a lying is "saying what is false with the intention of deceiving the neighbor" (#2508), which suggests the communal and relational dimension of lying.

But not all false statements are lies, since a lie must be intentional. "A person could be mistaken, delusional or one of those people for whom the distinction between truth and falsehood seems to have no meaning," Fleming said.

But it's precisely this intention to deceive that is so dangerous about the untruths being told in our culture today, said Mescher. "The whole purpose is to foment fear and division," he said. "That's what I find so morally outrageous. People are literally trying to tear us apart and sow distrust and suspicion. Those are fundamental threats to solidarity and kinship, and even to basic human dignity."

Much of the discussion around President Trump's many false statements hinge on whether or not he intends to deceive, but that takes away from another aspect of moral culpability, said Fullam. 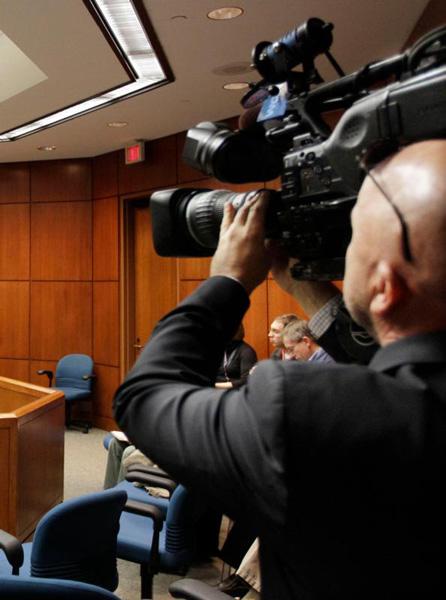 The idea of "vincible ignorance" says people cannot be absolved of moral responsibility for false statements just because they didn't know the truth — if the subject is something they should reasonably be expected to know or should know, Fullam said.

Vincible ignorance "adds another layer of ability to assess somebody's act," she said.

Similarly, the church teaches that civil authorities, especially, have an ethical responsibility to provide accurate information. The Second Vatican Council document Inter Mirifica (the Decree on the Media of Social Communications) noted that society has a right to information based on truth, justice and solidarity, Fleming said.

"Truth still matters, because we act on what we perceive to be the truth," she said, citing the example of misinformation about weapons of mass destruction leading to the U.S. going to war in Iraq after Sept. 11.

In addition to sowing fear and suspicion, lies and "fake news" kill compassion and foster moral apathy or inertia, Mescher said. "That saps people's commitment to be morally responsible for themselves and for one another."

Hope for the future?

Can the church — despite its own history of not always being truthful — be prophetic in the public square about the importance of this virtue?

Yes, the church can offer not only its voice, but its rituals, such as the sacrament of reconciliation and lament, said Mescher, who suspects the pope will lament the current state of affairs in his upcoming message on fake news.

Yount is optimistic. "It's not too late," she said. "There are breakdowns that are happening, but it still can be made right."

She notes that the catechism calls for reparations by those who lie, either through direct compensation or "moral satisfaction in the name of charity." (#2487)

But the church must be a truth-teller to have any credibility, especially among younger millennials who mistrust religious institutions. "I expect more from [church leaders], as I've watched them dance around and avoid some difficult truths," said Yount.

The church can recommit itself to the truth, said Fullam, although honesty can be risky. "But this is a time in which we really need to focus on what it means to be truthful people," she said.

Perhaps this will be a wakeup moment, said Fleming, and the increase in public lying will draw attention to the issue. "There is no such thing as alternative facts. There may be alternative interpretations. But things are, or they aren't," she said. "In the end, I believe truth has a power of its own."