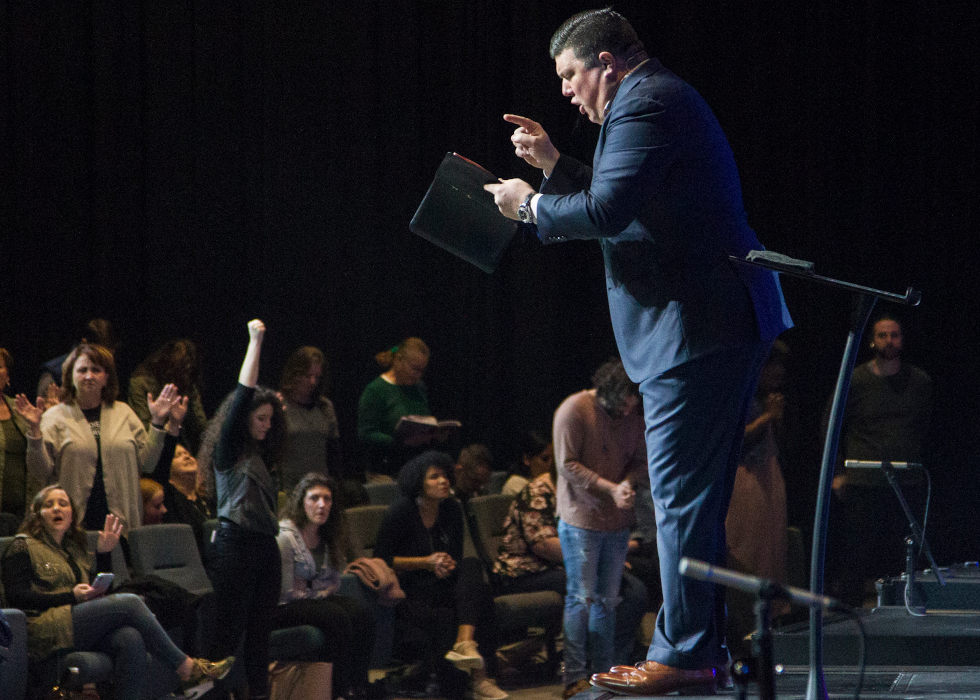 In this Sunday, March 15, 2020 photo, Redemption to the Nations church Lead Pastor Kevin Wallace preaches to his congregation about trusting God to help them get through the COVID-19 coronavirus threat in Chattanooga, Tenn. While most churches around Hamilton County decided to cancel services because of concerns over the disease, Redemption to the Nations stayed open. (AP/Chattanooga Times Free Press/Troy Stolt)

On the first Sunday after the coronavirus began upending American life, some religious institutions – including two churches whose pastors are close to President Donald Trump – held in-person services amid public health worries over the pandemic. That picture already looks different this week.

Pastor Robert Jeffress, a stalwart evangelical ally of Trump, held services at his First Baptist megachurch this past Sunday, March 15, in accordance with Dallas-area limits on gatherings of more than 500 people but said in an interview that this week, he would hold online-only worship. The Florida church where Paula White, Trump's personal pastor and a White House adviser on faith issues, invited congregants to in-person services March 15 will also shift to online-only status this week, according to a spokeswoman.

Jeffress, who had called for "a fearless church," said on March 17 that Christians should take "common-sense approaches" to protect their health.

"Every pastor needs to use wisdom, and it is very obvious that the government's motivation in this is to protect the well-being of individuals," he said.

Churches and other religious institutions that have chafed at public health experts' calls to fight the virus by avoiding gatherings are under heightened scrutiny as those experts' pleas become edicts from government officials, including Trump. In a nation where faith can be as politically polarized as any other part of life – and where freedom to worship has become a rallying cry on the right – some conservative religious institutions are acknowledging that the government's word comes first during a pandemic.

"All we're trying to do is obey the law. We might not agree with the governor on the best way to keep this from spreading, but he is the governor and the ban has been issued," Falwell said in an interview.

Falwell, who speculated on Fox News last week that coronavirus may have been the work of North Korea, added that he remains unworried about the virus but would not impose his view on others: "I just think it's silly to be wringing your hands and worrying about something like this, but that's just my personality."

Not every house of worship is bowing to government guidelines designed to help snuff out the virus. Rodney Howard-Browne, a Florida-based charismatic Christian pastor who prayed over Trump in the Oval Office in 2017, vowed not to stop services and encouraged worshippers to shake hands despite experts identifying that behavior as an easy way to spread the virus.

In Louisiana, pastor Tony Spell was warned by police March 17 after holding a service that attracted hundreds and flouted a state ban on mass gatherings. Spell, who has claimed that his services also heal cancer and HIV, said that he would not permit "any dictator law" to stop worship.

For many other pastors, prioritizing faith and science simultaneously is a high priority during the pandemic. But the minority view of faith leaders who chafe at suspending in-person services while coronavirus infections climb across the country is raising concerns. 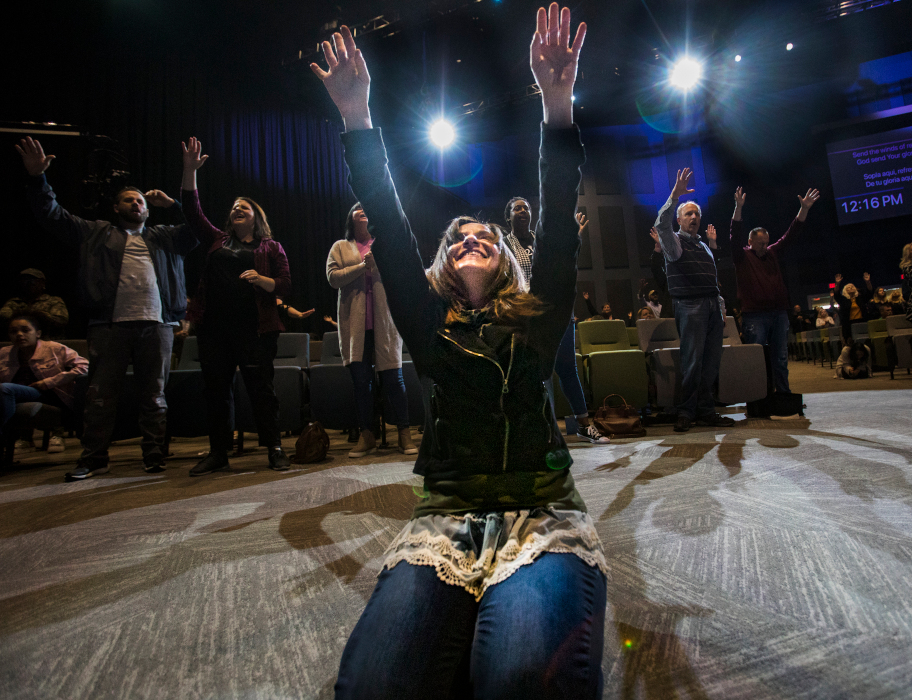 "Different churches have stayed open for different reasons. All of them need to suspend in-person events if they love their neighbors," said Nathan Empsall, an Episcopal priest and campaigns director for the liberal-leaning grassroots Christian group Faithful America. "The best way to love our neighbors is to do so from a distance right now."

As churches that have sought to keep gathering in person during the pandemic draw outsized attention, Empsall's group launched a petition this week calling for a halt to all in-person worship.

The First Amendment safeguards religious freedom, and 21 states have separate religious freedom laws designed to shield expressions of faith. Still, those laws are likely to provide scant protection for any house of worship that defies emergency governmental moves to limit gatherings during the fight against the pandemic.

Religious organizations could make a constitutional claim to being singled out by a law that treats secular activity differently, said Eugene Volokh, a UCLA Law School professor and First Amendment expert. "But if you're just imposing the same burden on everybody, for reasons completely unrelated to religiosity of the behavior, that is likely to be permissible even" under state-level religious freedom laws, he said.

Those religious freedom laws ask whether government restrictions are the least burdensome way to further a "compelling interest." When it comes to coronavirus, Volokh said, courts are likely to find "there's a compelling interest in preventing death through communicable disease."

Luke Goodrich, vice president of the Becket Fund for Religious Liberty and a top religious freedom attorney, agreed that the public health emergency of the pandemic would make the governmental case for restrictions on gatherings, including worship, "far stronger than usual."

To be sure, difficult questions about pausing in-person services as the coronavirus spreads are not limited to churches. While the Orthodox Union issued guidance this week calling for strict limits on worship gatherings, the New York Times reported that fire department officials in New York had to disperse a large Hasidic wedding that ignored the city's gathering ban.

"The city will continue to respond to complaints, educate the public, and enforce the capacity guidelines in place for all events and locations in the interests of public health and safety," said Jim Long, a fire department spokesman.

For most people, the virus causes only mild or moderate symptoms, such as fever and cough. For some, especially older adults and people with existing health problems, it can cause more severe illness, including pneumonia. The vast majority of people recover.