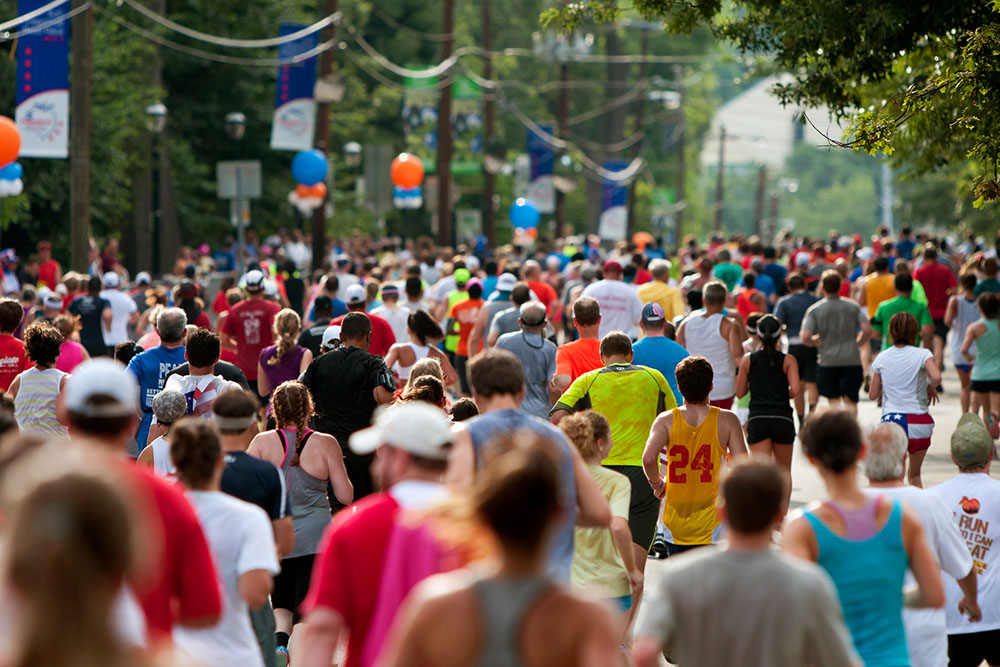 The Peachtree Road Race in pre-pandemic years: Thousands of runners crowd an Atlanta street on their way to the Peachtree finish line on July 4, 2014. (Dreamstime/Russ Ensley)

After more than two years of taking all the necessary precautions like masking and receiving the full vaccination and booster shot, the ever-shifting variants of COVID-19 finally caught up with me. My turn had come: I tested positive last month. Because of my age, relative health, and vaccination status, my experience of the virus was pretty mild, with two nights of fever and a few days of feeling like I had really bad seasonal allergies. But it was enough to slow me down, to interrupt my regularly scheduled life.

It also threw a major wrench into the gears of my running routine, and at a time when it couldn't have been more impactful. As an avid runner, having run dozens of competitive road races over the years, I hadn't toed the line to race since the start of the pandemic. The last normal race I ran was a half marathon in South Dakota in September 2019. And now I was set to run two major races in the first week of July.

For at least the first year and a half of the pandemic, most competitive road races were postponed or canceled across the country. In 2021, hybrid approaches began returning where some runners would run the equivalent distance of the race at some point and some place within a specified time frame and report their results to the race officials remotely, while a limited number of runners would compete in person at the race site.

By 2022, with vaccines rolled out and adjustments to the "new normal" still underway, competitive road races began to return to something resembling the pre-pandemic era.

Two weeks after recovering from COVID-19, I was in Atlanta to run the annual Atlanta Journal-Constitution Peachtree Road Race, historically the world's largest 10K with pre-pandemic registration cap at around 60,000 runners. It was the sixth time I had run the July 4th race, but this time it was very different from my experiences before.

The same was true less than a week later, when I was in Utica, New York, for the Boilermaker 15K Road Race, which I had run many times before on the second Sunday in July.

The first thing I noticed was that the Peachtree was smaller, with about 35,000 participants completing the race this year compared to the more than 60,000 finishers in 2019. Likewise, the Boilermaker typically draws about 14,000 runners and announced fewer than 8,000 this year.

Since it had been three years since I last ran a race, I was also out of practice when it came to training and competing. While I had continued running throughout the pandemic (one of the few safe activities a person could do by themselves and outdoors), I did not "train" for anything in a formal sense.

Add to that lack of training and several years of not racing the fact that I tested positive for COVID-19 three weeks earlier and any hopes for trying to race competitively or strive for a personal best in course time were entirely shot. I had to approach this race differently, not thinking about times and racing strategies, but embarking instead on a new kind of running experience for me.

While I like to think that I've always approached every road race — from 5Ks to full marathons — with a spirit of gratitude and appreciation, I know that more often than not practical considerations (such as remembering my pacing strategy, fueling and hydration plans, and so on) often occupied my mind more than a spirit of awe and wonder.

For these two races this week, I worked hard to intentionally attend to the sights, sounds and energy around me. The Peachtree in Atlanta is famously hot and humid; honestly, the weather is rather disgusting. Nevertheless, tens of thousands of runners wake up before dawn and make their way to the city by train and car and bus to run 6.2 miles in the hazy, soupy summer climate. It's so humid, even before 7 a.m., that most runners are already dripping with sweat just standing still at the start line.

In the past, I would typically see the crowds as a potential obstacle: The portable toilet lines were frustratingly long; paths to the assigned corrals were blocked by a mass of runners; and so on. But this year, I focused my attention on the simple marvel that 35,000 people were coming together for the first time since 2019 to do something that has become an important tradition.

I know the atmosphere at the start of both races — the Peachtree and the Boilermaker — are always exciting and energetic, but this year I was particularly attuned to what I perceived as a deeper spirit of gratitude among all the participants. What we had all taken for granted in the years prior had been thrown into doubt and, as I think back to 2020, it was unclear if we would ever have such opportunities again. That we were back and experiencing something very close to normal was itself an awesome gift.

Recognizing that I was in no position to run competitively as I had in years past, I focused on details that I had not been able to fully appreciate before. I was running slower and easier, and that gave me a new sense of time and freedom to look around and take inventory of what surrounded me.

I gave prayerful thanks for the gift of health and recovery that allowed me to put one step in front of another, at whatever pace, to move along with all those who were likewise running in the same direction. I allowed my heart to be filled with appreciation for all those spectators who lined the streets of Atlanta and Utica, early on a federal holiday in the former and early on a Sunday in the latter.

Before and after these races, I have always prayed for and given thanks for the organizers, volunteers, health care workers, fire and police officers, and all who make such massive events possible and safe. But this year, more than ever, I consciously went out of my way to thank the volunteers who handed out water along the course and the first responders who stood by in the event of a medical emergency.

Normally, I am so exhausted immediately after crossing the finish line that it takes me some time to regain my breath and energy and chat with others. This year, I found myself in a moving conversation with a Canadian woman who had come to run the Boilermaker. As we walked together through the finisher's chute toward the post-race celebration, we chatted. She had a lovely experience on the course, but was troubled by the military and police presence throughout the racecourse.

Clearly concerned, she asked if American police carried machine guns everywhere — "Like in your malls?"

I assured her that they didn't, but that since the 2013 Boston Marathon bombing, large professional road races have never been the same. For distance runners, Boston 2013 marked a change in our experience of road races forever in a way akin to how Sept. 11, 2001, changed air travel.

I am thankful for the international connection we shared, which was made possible by my slowing down that morning.

A Canadian stranger at the finish line, a volunteer handing out water, a police officer directing runners to the start, the crowds of citizens who chose to cheer on strangers rather than sleep in on a holiday — I am grateful to and for all of them, and in a renewed way. While I hope that next year I am in a healthier position to run these races as I have before, I especially hope to maintain this deeper sense of gratitude when I return to the start line.