As Catholic school teachers head back to the classroom, discontent simmers 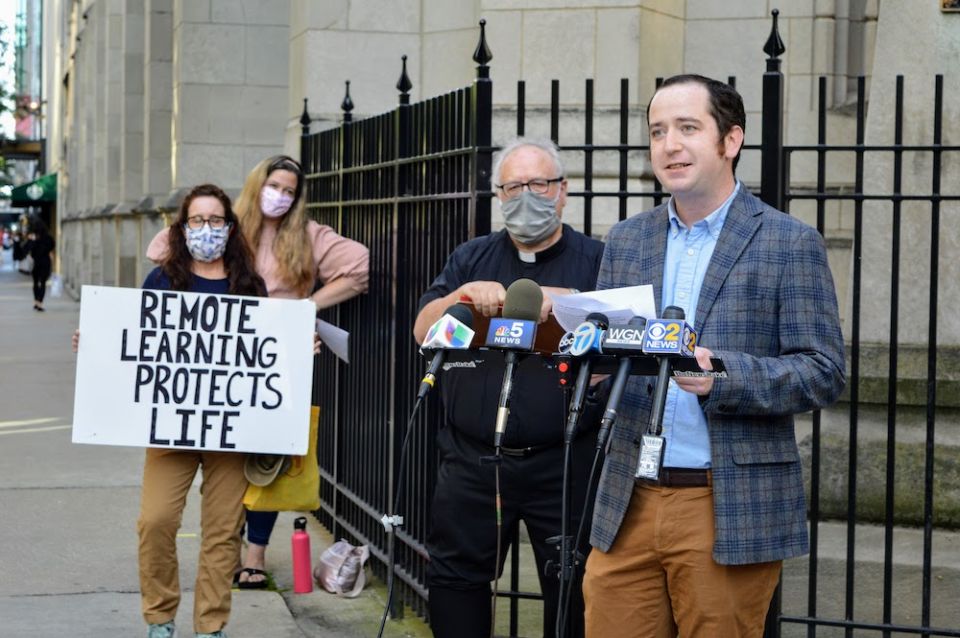 James Cahill, 32, a middle school social studies teacher at St. Francis Xavier School in Wilmette, Illinois, speaks out against the Chicago Archdiocese's reopening plan at a rally in front of schools' headquarters in downtown Chicago on Aug. 20. (Courtesy of Arise Chicago/Shelly Ruzicka)

When Elaine Sage, a teacher at St. Francis Xavier School in Wilmette, Illinois, thought about going back to the classroom this fall, she was afraid. She is 64 and her husband has beaten liver cancer twice, meaning he is at higher risk for COVID-19.

"That's why I decided to go public," she told NCR. "I knew what would happen if I did. I knew I would lose my job. I just knew it, but I thought that people needed to know the truth."

After she told administrators her concerns and asked to teach remotely, she was informed in a Aug. 19 letter from the school that she was being released from her contract. There were no remote-teaching positions available. Neither was a leave of absence.

"It was incredibly hard," Sage said. "There are days I just sob."

Hundreds of other archdiocesan teachers formed a private Facebook group to air their concerns about the reopening plan. Few spoke up, though, Sage said; they were afraid they would end up like she did. Out of a job.

Manuel Gonzales, a spokesman for the archdiocese, declined to comment on internal personnel matters. However, he told NCR in an email the plan adheres to all public health guidance on social distancing and that schools are providing teachers with ample personal protective equipment. 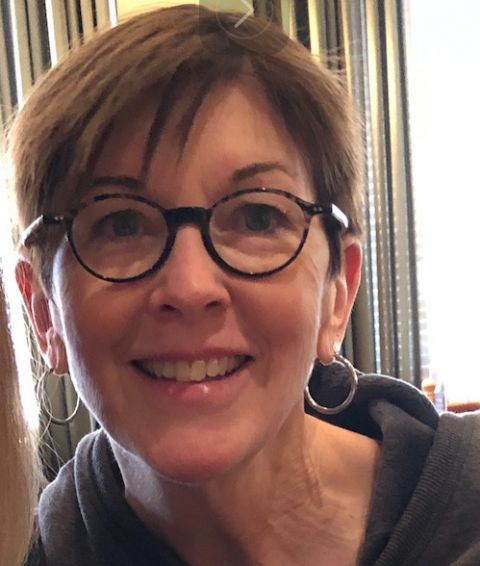 Gonzales cited a survey distributed in the second week of September in which 87% of school employees indicated they are comfortable with the safety measures and only 5% are not.

Much like the Chicago survey results suggest, a majority of Catholic school teachers have gone back to the classroom without the forceful opposition public schools received from their teachers' unions. But, some teachers insist, that belies widespread alarm and anxiety hidden by Catholic teachers' fear for their jobs and deference to the church.

Bobby Nichols, 30, a former campus minister and high school theology teacher in the Archdiocese of Louisville, Kentucky, said online chats with his former colleagues are alive with those fears. He left teaching for reasons unrelated to the coronavirus.

In private, he told NCR that teachers were saying classrooms are too small for social distancing, hallways are worse and the buildings are poorly ventilated. Even if teachers felt their school's plan was safe, there was an abiding sense the archdiocese had not consulted with them, Nichols said.

But no one spoke out.

"There's a real fear that if they say anything they could get fired," Nichols said. In August, he wrote an op-ed in the Louisville Courier-Journal decrying the schools' plan, to say what his friends and colleagues could not.

As of Sept. 19, more than a month after school began, Louisville's archdiocesan schools had 81 active student cases of coronavirus and 10 among staff, the second highest school district totals in the state, according to Kentucky Public Health data.

Cecelia Price, a spokeswoman for the archdiocese, told NCR in an email that those cases represent a small fraction of the 18,500 students in schools there.

The school leadership is working individually with teachers who have concerns, and a representative of the superintendent's office met with teachers during the second week of September, she said.

"We believe that most teachers and most families are happy with the return to in-person instruction," Price said.

In the absence of national surveys, it is unclear what the majority of teachers think about Catholic education's push for an in-person return, and responses would depend on the hundreds of plans developed by states, dioceses and schools.

"Most places have been able to work it out exactly the way everybody wants," said Kathy Mears, CEO of the National Catholic Educational Association. "But we don't know how to work it out sometimes because the finances can be a brick wall."

The pandemic threw Catholic schools' already strained balance sheets into disarray and pushed them to reopen in person in a bid to attract parents wary of more remote school offered by their public districts.

In the  Philadelphia Archdiocese, school officials' attempt to insure themselves in case that bet does not pay off sparked a showdown with teachers.

Rita Schwartz, president of the Association of Catholic Teachers Local 1776 in Philadelphia, which represents high school teachers, said that school officials inserted a clause into the new contract that would have allowed them to make a round of staff cuts in October after evaluating enrollment, among other "poison pills."

"They were trying to take teachers' rights away from them when they needed them the most," Schwartz said.

When the proposed contract went up for a vote before the union's 500 members on Sept. 8, they voted it down nearly four to one.

"My teachers are not afraid of a strike, never have been, never will be," Schwartz said. Over the next two days, Schwartz and archdiocesan officials negotiated down to the wire to produce a new draft with the controversial clauses excised.

The new contract was ratified at a hastily called, late-night Zoom meeting on Sept. 11, averting a back-to-school strike.

Only a handful of Catholic schools across the country, like those in Philadelphia, are unionized, but the pandemic has demonstrated their importance for winning protections for members, said Schwartz, who also leads the National Association of Catholic School Teachers.

Unionized Catholic school teachers were filing labor complaints against the New York Archdiocese for many of the same reasons the teachers without unions in Chicago and Louisville were fuming in Facebook and text groups.

"That's why teachers form unions. No one listens to them. They have no input. They are told what to do," Schwartz said.

That is how James Cahill felt.

The middle school social studies teacher spoke out publicly against the reopening plan, but in the end agreed to return in-person. He told NCR that when he hears about students in the archdiocese catching the virus, he worries about giving it to his mother, who has asthma, or students' families who he knows are vulnerable.

Gonzales said the archdiocese currently has "a few" cases of the virus in "a few schools," but said school officials have moved quickly to contain them.

"There's a high level of fear and anxiety," Cahill said. "There's sort of a sense of, 'When is the other shoe going to drop?' "

Editor's note: This article has been edited after publication to correct identification of a source.

Coronavirus | As Catholic school teachers head back to the classroom, discontent simmers

Georgetown University agrees to a vote by union-aspiring grad students