Chaplain at the 'epicenter of the epicenter' in New York City prays with, anoints the sick 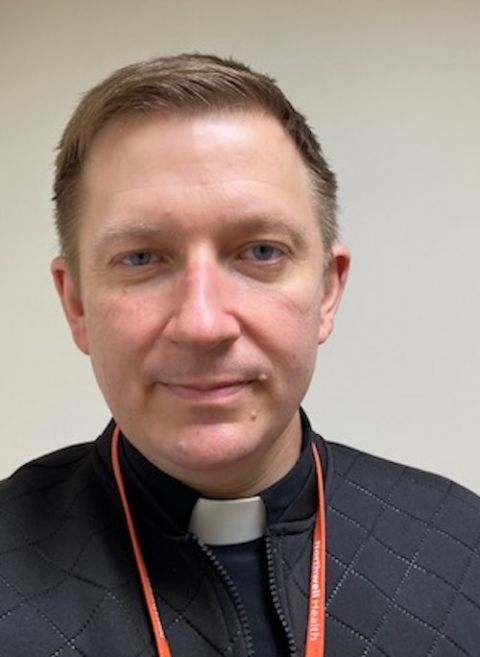 It's the end of a long shift as a hospital chaplain in Queens, New York, and Fr. Radu Titonea's voice while talking on the phone March 30 is a little raspy. He lets out a mild cough.

"It is not coronavirus," he assures a listener. He offers a joke. "You can't transmit it through the phone," he says.

Titonea, chaplain at Long Island Jewish Forest Hills Hospital, says he's never experienced what he's been through in the past few weeks as the facility has been flooded with coronavirus patients. While he doesn't have exact figures, when told that nearby Elmhurst Hospital recently experienced 13 deaths in a single day, he says Long Island Jewish's toll is not too far from that number.

His work is divided between counseling and praying with staff and with patients. "My role is to try and keep everyone as calm as possible," he says. The 38-year-old priest, a native of Romania, has been chaplain at Long Island Jewish for 10 years. The 312-bed Forest Hills facility is relatively small for New York City hospitals.

While New York City far surpasses any other American city for number of cases, Queens is the borough with the most in the city. It is considered the epicenter of the epicenter.

So far, he says, the medical staff has what they need. But that doesn't assuage all the fears of disease transmission nor address whether resources will be available as the pandemic continues.

Nurses are working 12-hour shifts. "They have to be there. They do it. And they do it very well," he told NCR.

As chaplain, he is there with the staff and the patients. He keeps his distance from sick and dying patients, but will pray with them and offer the sacrament of anointing of the sick. He also wears protective garb. He has not been tested for the coronavirus. There is reason to fear, but he feels a need to be there.

"I have to be in solidarity with the people. I do my call," he says. The disease's contagiousness requires that families be kept away. The priest is the last person a dying person sees.

Titonea, who is also administrator of the St. Mary Romanian Byzantine Catholic Mission in Astoria, Queens, says that in many ways his chaplain role is a simple one.

"I am just trying to pray. I talk loud," he says, noting that the doctors tell him that the last sense that survives for dying coronavirus patients is hearing.

"It is a very sad situation. You go to a room and you are with a machine. You think about those poor families," he says.

He will call the families of the deceased. "I tell them that they received the best care, spiritually and physically" and that their loved one did not die alone.

There is reason to hope, says Titonea. The vast majority of the patients with coronavirus will get better and return home. "It's important to see the other part. We need to look for the light, and the light is there."

This Lenten season, he says, it will be "the cross of Christ and the light of the resurrection that will keep us going."

Coronavirus | Chaplain at the 'epicenter of the epicenter' in New York City prays with, anoints the sick