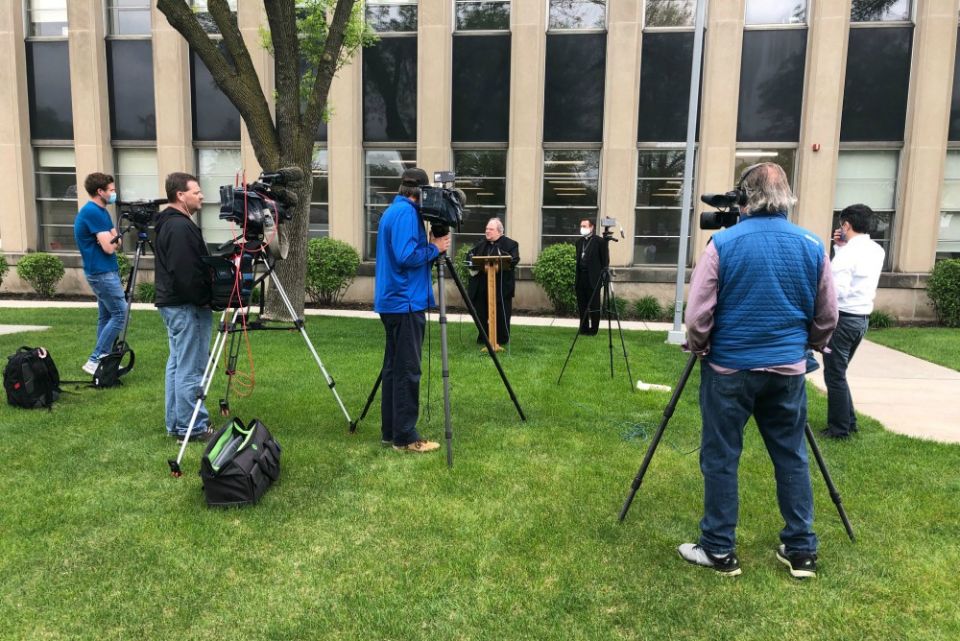 Something truly remarkable happened last week when the Minnesota Catholic Conference announced it intended to violate an order issued by that state's governor and commence public liturgies in excess of the limits the government prescribed.

As I've spoken with bishops across the country during this pandemic, all of them have remarked upon the complete absence of any politicization of the shutdowns, the retreat of usual ideological divisions in the face of the clamant need to prevent the spread of this virus. All agreed to abide by the guidance offered by public health officials and duly constituted civil authorities, until St. Paul-Minneapolis Archbishop Bernard Hebda and the other Catholic bishops of Minnesota decided to confront their governor.

The news got lost in part because the two days later, President Donald Trump announced he was ordering churches reopened nationwide. His demand had no legal effect, because states and municipalities have jurisdiction in these matters, so his passionate discourse resembled nothing so much as the fable of King Canute ordering the waves to recede. It was interesting to note, however, that the president insisted on deeming church liturgies "essential" services, and exempting them from public health restrictions, but then he did not actually attend services and went golfing instead.

In a letter announcing their decision, the Minnesota bishops wrote, "We are blessed to live in a nation that guarantees the free exercise of religion. This right can only be abridged for a compelling governmental interest, and only in a way that is narrowly tailored to be the least restrictive means of achieving the desired end."

If that language does not sound ecclesial, that is because it isn't. It is the language of American jurisprudence.

Hebda joined a press call to explain the decision. It was not organized by the St. Paul-Minneapolis Archdiocese or by the Minnesota Catholic Conference. Instead, reporters were welcomed on the call by Ryan Colby, the associate communications director of the Becket Fund. The call also featured commentary by Becket's Vice President and Senior Counsel Eric Rassbach.

Becket is part of the politico-theological complex committed not to the defense of Catholic doctrine but to the promotion of the Republican Party. It advocates an understanding of religious liberty that can charitably be called expansive.

"I am grateful to be with you today," the archbishop began, "to defend the religious exercise of our Catholic community and all communities of faith in the state of Minnesota."

Toward the end of his intervention, Hebda said, "I am hopeful that Gov. Walz will heed our call and amend his order to avoid a serious violation of religious freedom."

Someone needs to explain to the good archbishop that as a bishop, he is vowed to defend the church's teaching on what does and does not constitute a "serious violation of religious freedom," and that religious exercise in his state is not threatened by a Democratic governor but by a nonpartisan virus. And, in the nick of time, someone did come forward to explain this to Hebda and the other bishops of Minnesota: Chicago Cardinal Blase Cupich.

In an important essay published at America magazine, Cupich explained that the church's teaching about religious liberty does not conceive of that, or any, liberty in the absolutist terms conceived by the Becket Fund lawyers and the Minnesota bishops.

Cupich quotes the Compendium of the Social Doctrine of the Church — which in turn cites the Vatican II decree Dignitatis Humanae: Religious liberty "is not of itself an unlimited right. The just limits of the exercise of religious freedom must be determined in each social situation with political prudence, according to the requirements of the common good, and ratified by the civil authority through legal norms consistent with the objective moral order." That last clause is the one the Minnesota bishops threw out the window.

Cupich places his reminder about what the church actually teaches about religious liberty within the broader context of church teaching: In Gaudium et Spes, the fathers of Vatican II set forth a model of engagement with the world, as Cupich explained:

Moreover, while the church enjoys its autonomy to act in the world, it does not stand in competition with the world. Rather, being in the world means that the church journeys in solidarity with all of humanity. If the church is to preserve its identity as "a sacramental sign and an instrument of intimate union with God, and of the unity of the whole human race" ("GS," No. 42), there must be a proper balance between its autonomy and its solidarity with humanity.

This balanced, nuanced approach, which runs right through Gaudium et Spes in its entirety, could scarcely be more different from the culture war model upon which the Becket Fund depends for its fundraising and to which, regrettably, the Minnesota bishops surrendered.

Yes, surrendered. Having been all ginned up by years of "Fortnights for Freedom," and formed in the cockeyed ecclesial worldview of disgraced former Archbishop John Nienstedt, the Minnesota bishops were so terrified of surrendering their religious freedom to a Democratic governor, they surrendered the church's understanding of its own teaching to the culture warriors at the Becket Fund. It used to be that law firms were kept on retainer, but now it is certain hierarchs who appear to be retained by Becket!

This whole societal reopening will have many fits and starts. We should all hope the summer months bring a respite. And, despite efforts to compare attending Mass with going to the mall, a Mass entails being next to a group of people for a sustained time. In a store, you may pass as many people as you would see at church, but you pass by them in seconds. Neither situation is entirely free from risk, to be sure, but a movie theater is a closer public health analogy to a church service, and most of them remain closed.

So, we turn to our civil authorities to consult with their leading experts and set the rules. They may even get it wrong at times. But none of that threatens religious liberty. It only threatens the raison d'être of the Becket Fund and the embattled, embittered Weltanschauung of some culture warrior bishops.

A version of this story appeared in the June 12-25, 2020 print issue under the headline: Minnesota bishops surrender to the culture warriors .

What I am learning from 'God's First Bible'