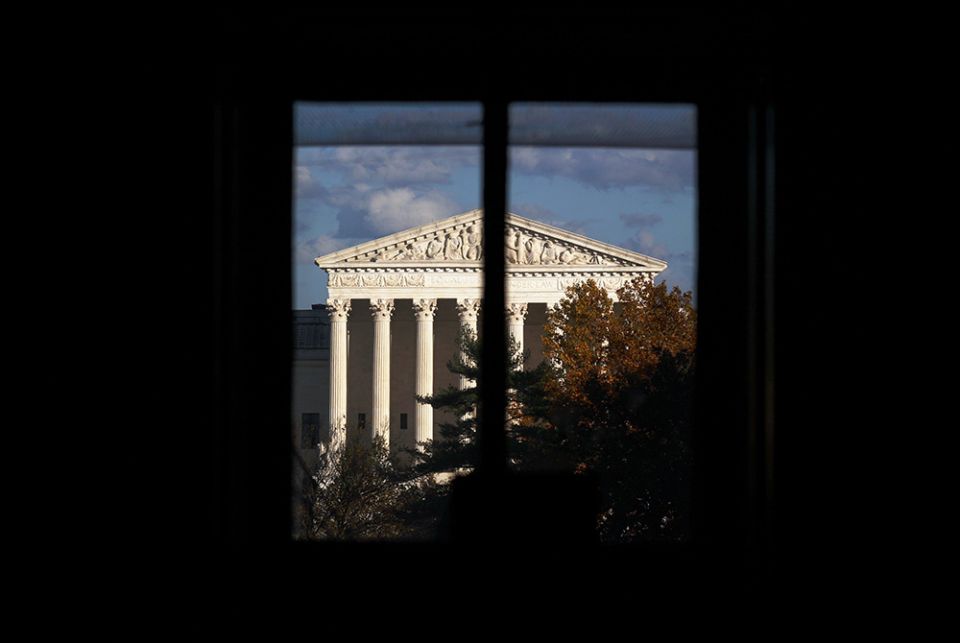 The Supreme Court building is seen through a window Nov. 10 in Washington. (CNS/Hannah McKay, Reuters)

Usually on Thanksgiving, if I get indigestion, it is from the stuffing. This year, it came from the Supreme Court.

The night before Thanksgiving, the court granted injunctive relief to the Diocese of Brooklyn, New York, and other religious organizations, from the state-imposed, COVID-related restrictions on the number of congregants who can attend a religious service in those parts of the state where the spread of the virus was rampant. The per curiam decision was accompanied by two concurring opinions, from Justices Neil Gorsuch and Brett Kavanaugh, and a dissenting opinion from Chief Justice John Roberts. And yesterday the Supreme Court ordered a lower court to reexamine COVID-related restrictions on religious worship in California on religious liberty grounds.

The first decision was the first demonstrable effect of the death of Justice Ruth Bader Ginsberg and her replacement by Justice Amy Coney Barrett. In May, the court upheld similarly stark restrictions in the case South Bay United Pentecostal Church v. Newsom. There, the 5-4 majority backing the government included Ginsburg.

In last week's case, Barrett joined the majority opposing the government. Barrett apparently was not content that the White House announcement of her nomination turned into a superspreader event. This "pro-life" justice wants to provide more Americans with the opportunity to contract this deadly virus.

To say that the decision is filled with nonsensical assertions is too generous. The decision argues the case is not moot, even though the areas in Brooklyn classified as "red" and "orange" at the time the suit was filed are no longer so classified, and consequently are no longer subject to the rigorous restrictions. Then the decision adds, "injunctive relief is still called for because the applicants remain under a constant threat that the area in question will be reclassified as red or orange." No, the threat is not reclassification. The threat is spiking COVID-19 rates that justify reclassification.

Members of this Court are not public health experts, and we should respect the judgment of those with special expertise and responsibility in this area. But even in a pandemic, the Constitution cannot be put away and forgotten. The restrictions at issue here, by effectively barring many from attending religious services, strike at the very heart of the First Amendment's guarantee of religious liberty.

The part about not being public health experts is obvious enough: They compare shopping in a store with attendance at a religious service when it is obvious that the former entails limited exposure for a minimal amount of time and the latter requires limited exposure over an extended period of time. No one is putting the Constitution away and forgetting it. Everyone wants to return to normal. We all stipulate that the restrictions on religious worship are extraordinary, quite literally, beyond the ordinary, because living in the midst of a pandemic is the very definition of extraordinary.

Worse than the per curiam decision was the concurring opinion by Gorsuch. He questioned the motives of his colleagues on the court:

Why have some mistaken this Court's modest decision in Jacobson for a towering authority that overshadows the Constitution during a pandemic? In the end, I can only surmise that much of the answer lies in a particular judicial impulse to stay out of the way in times of crisis. But if that impulse may be understandable or even admirable in other circumstances, we may not shelter in place when the Constitution is under attack. Things never go well when we do.

This earned a stinging rebuke from Chief Justice John Roberts, whose dissent states:

To be clear, I do not regard my dissenting colleagues as "cutting the Constitution loose during a pandemic," yielding to "a particular judicial impulse to stay out of the way in times of crisis," or "shelter[ing] in place when the Constitution is under attack." Ante, at 3, 5–6 (opinion of GORSUCH, J.). They simply view the matter differently after careful study and analysis reflecting their best efforts to fulfill their responsibility under the Constitution.

Arguments at the conference table must have been pretty heated to provoke such a scolding from the mild-mannered chief justice who famously, at his confirmation hearing, said that a judge's job is "to call balls and strikes."

It is increasingly clear that Roberts understands that the court may be the least political of the three branches, but that it cannot operate in a politics-free tower without bringing the institution itself into question. Regrettably, Roberts' view is no longer a majority opinion.

On the merits of the case, however, Roberts' dissent is clearly more in line with Catholic teaching.

On EWTN's Nightly News program Tuesday night, Andrea Piccioti-Bayer, director of the Conscience Project, hailed the decision. "This is really a huge, huge movement forward on behalf of the court in support of religious freedom," she said. She called the decision "a great breath of fresh air," which seems a most inappropriate assignation seeing as the decision might facilitate more people taking their breaths of fresh air through a ventilator.

Dignitatis Humanae is explicit on both the doctrinal foundation of a constitutional right to religious freedom and on the limits of that right. "Injury therefore is done to the human person and to the very order established by God for human life, if the free exercise of religion is denied in society, provided just public order is observed," the council fathers stated at Paragraph 3 and, again at paragraph 4, "Provided the just demands of public order are observed, religious communities rightfully claim freedom in order that they may govern themselves according to their own norms, honor the Supreme Being in public worship, assist their members in the practice of the religious life, strengthen them by instruction, and promote institutions in which they may join together for the purpose of ordering their own lives in accordance with their religious principles" (emphasis mine). Paragraph 7 begins: "The right to religious freedom is exercised in human society: hence its exercise is subject to certain regulatory norms. In the use of all freedoms the moral principle of personal and social responsibility is to be observed. In the exercise of their rights, individual men and social groups are bound by the moral law to have respect both for the rights of others and for their own duties toward others and for the common welfare of all."

If public health regulations do not meet the criterion of public order, what would? If "the moral principle of personal and social responsibility" does not extend to avoiding the spread of a deadly disease, what does?

Of course, you need not adhere to Catholic teaching to be alarmed by the court's decision. Gorsuch is not staking out a liberal position so much as a libertarian position. Nothing evidently, not even a pandemic, can stand in the way of the absolute vindication of an expansive reading of a First Amendment right.

This was the reasoning of Bret Stephens at The New York Times as well. "The point is there are no second-class rights — and the right to the free exercise of religion is every bit as important to the Constitution as the right to assemble peaceably, petition government for redress and speak and publish freely," he wrote, applauding the decision. "That goes in circumstances both ordinary and extraordinary."

Bosh. I would defend the right to publish the Pentagon Papers, but if a newspaper planned to publish the plans for D-Day a month before the landings, the government could surely stop it. The right to assemble peacefully would have an entirely different legal hurdle if the protests last summer had been inside, not outside, because of the way the disease is communicated, not because of the way the Constitution is written.

After four years of the most unprincipled president in the nation's history, I am reluctant to denounce anyone for sticking to their principles. But principles are applied; they do not exist in a vacuum. I love the First Amendment and have defended it against those who seem to circumscribe its reach.

There is a point at which a person in no longer principled so much as he or she is an ideologue. Like COVID-19 restrictions, the diagnosis changes with the circumstances but the decision in Roman Catholic Diocese of Brooklyn v. Cuomo leads me to the frightening conclusion that, at least on this issue, five of the justices on our nation's highest court are ideologues. That fact threatens the health of millions of Americans and threatens, too, the political health of the Republic. After COVID-19, the five zealots will still be in the majority.

Column | Ideologues on the court threaten the nation's health

Trump is unfit to be president of the United States