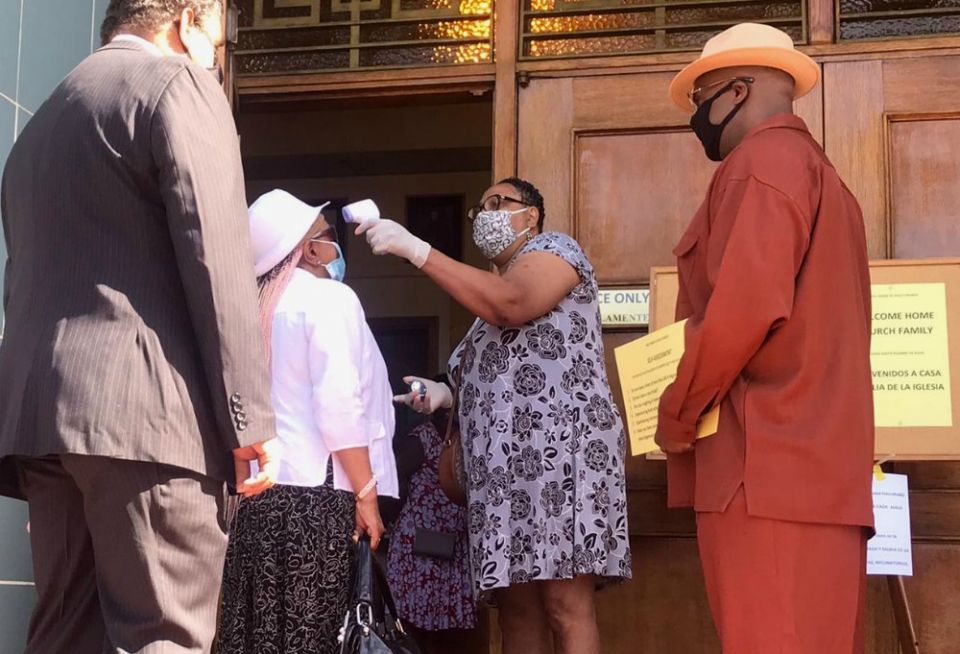 After nearly three months with no in-person Mass at Holy Name of Jesus Church in Los Angeles, one change stood out to Greg Warner when the parish reopened June 14. "I been Catholic all my life," Warner said. "That's the first Catholic Mass I ever went to, nobody's coughing the whole time."

Holy Name, as parishioners call it, serves a predominantly Black and Latinx congregation in the Jefferson Park neighborhood, near the University of Southern California. Holy Name closed its doors in late March when Los Angeles Archbishop José Gomez suspended gatherings to slow the spread of the coronavirus, but as of June 14 it became the first Black Catholic parish in the city to reopen.

Under Step 2 of the archdiocese's reopening guidelines, set in compliance with protocols from the Los Angeles County Public Health Department, parishes were allowed to resume in-person Masses as early as June 3, but not without special screening and social distancing measures in place, and volunteers to reinforce them.

Holy Name's pastor, Josephite Fr. Kenneth Ugwu, led the parish's volunteer training session on June 6, with help from Rosa Peñate, who interpreted instructions into Spanish. The 27 trainees practiced symptom screening and ushering to match regulations, and on reopening day, they guided visitors through two successful Masses, one in English and one in Spanish. 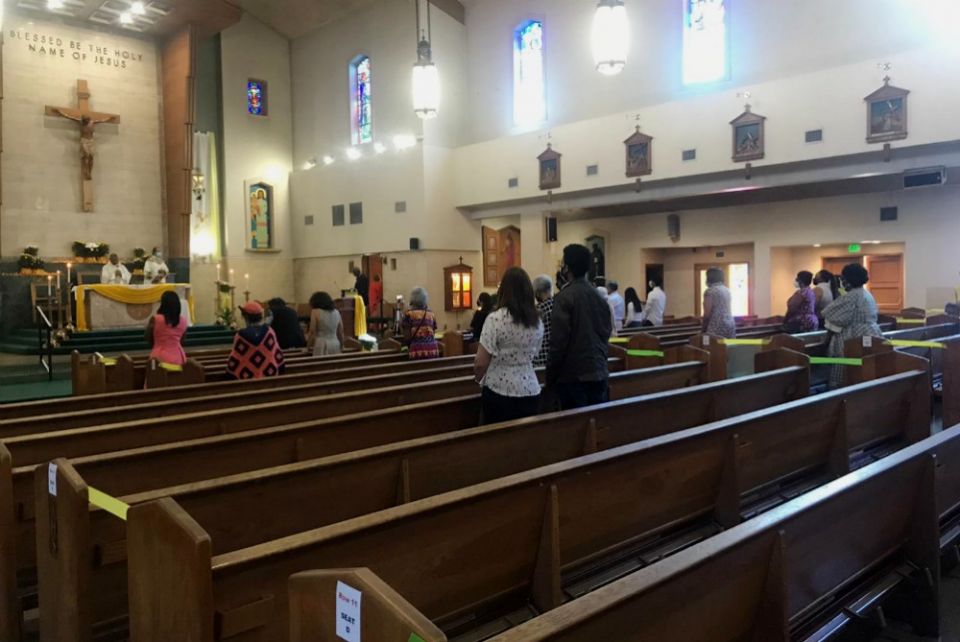 Among the volunteers, Ganine Arnold stood at the church door taking temperatures with an infrared thermometer, and counting people with a clicker. In total, 41 attended 10 a.m. Mass, all wearing masks, and all seated at least 6 feet apart unless they belonged to the same household. Arnold grew up only a few blocks from the church, and during the months of closure, she made the sign of the cross whenever she walked by, longing to return to the physical space and its community.

"Being in the house of the Lord, I really, really missed that," Arnold said.

Shortly after Holy Name closed in March, Ugwu started hosting daily 8 a.m. teleconferences. In the phone meetings, which are ongoing, he offers homilies, makes announcements and gives the community a chance to pray together. Teleconferencing has been particularly important for Holy Name because Ugwu only began his ministry there recently, at the beginning of Lent.

"It's yielded a bonding that even I didn't know it was going to yield, not only among the parishioners, but even for me as a new pastor," Ugwu said.

During Holy Week, the parish also began streaming bilingual Masses on Facebook Live. Along with other parishes in the archdiocese, Holy Name livestreamed a Mass for social justice and peace in memory of George Floyd on June 9, but over the past four weeks, parishioners have not had the opportunity to come together in person to feel the emotional and spiritual effects of protests and police violence around the country.

"They definitely missed that opportunity, and maybe that's why their voices didn't come together as a community as they would have if not for COVID-19," said Ugwu.

The parish, which celebrates its 100th anniversary next year, has a long history as an important center for its area, which has been predominantly Black since the end of World War II, with many Black Americans of Creole descent.

Another part of the parish's history is a strong and continuing tradition of evangelization. Today, Deacon Doug Johnson and Peñate lead Sower LA, a youth evangelization ministry supported by the archdiocese. They were planning large community events and other outreach efforts before the coronavirus pandemic, but now many of their initiatives have been halted or moved online.

Holy Name's evangelization ministry has had success partly because of the vibrancy and friendliness of the parish's Masses. "We pride ourselves on the Gospel Mass, which is why people come from all over," said Sheree Brown, Johnson's wife.

Before the church reopened, Peñate was worried that volunteers would have to turn away parishioners who were yearning for that powerful communal experience. Los Angeles County mandates that churches admit no more than 25% of their seating capacity, or 100 individuals, whichever is smaller. For Holy Name, this means an 85-person capacity.

Some of Peñate's friends who worship elsewhere asked her if Holy Name was opening, and at what time. Fortunately for visitors, neither Mass approached the 85-person limit, so all who came were able to attend. 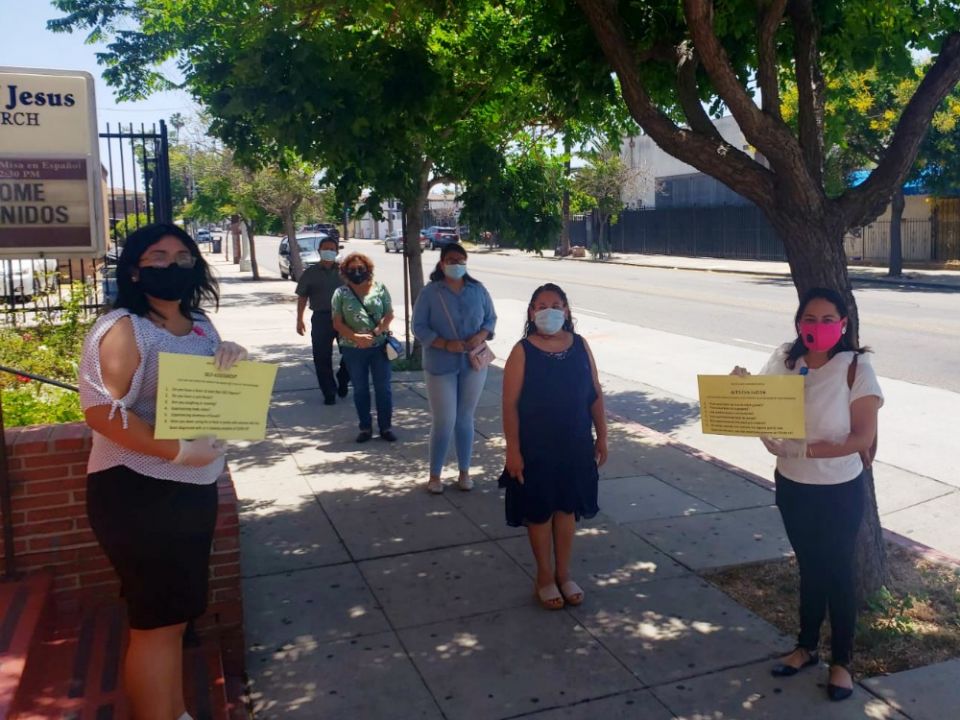 One visitor was Felicia Jackson, a member of nearby Transfiguration Catholic Church. Jackson is a director of custodial operations for Uniserve, a company that provides janitorial and other facilities maintenance services. Churches must undergo deep cleaning before they can reopen, and Jackson was so eager to attend Mass again that she and her crew cleaned and sanitized Holy Name for free.

"We needed to open up a church and this was the first parish in the Black community that I'm aware of that was ready to open. And I needed Father to have peace of mind that it would open with it being completely sanitized down so that the parishioners could come back in," Jackson said.

Despite the cleaning, volunteers and social distancing rules, some parishioners did not feel safe to return. Johnson attended Mass last Sunday, but he knows that many more vulnerable members of the Holy Name community will not be ready to do so until the county's COVID-19 cases decrease significantly. According to the Los Angeles Times, county officials confirmed more than 19,000 new cases in the past two weeks alone.

Whether or not more of Holy Name's parishioners decide to attend Mass this coming Sunday, they made clear to Ugwu how much their church means to them over the period of closure.

"Some of us priests never really took to heart in this unique way how much the church meant for the people, you know, the physical building, until this happened," Ugwu said. "Not being able to be in church, they have that feeling of emptiness that it's yearning to be filled, but it just can't."

[Lucy Grindon is a freelance reporter based in Los Angeles.]

A version of this story appeared in the July 10-23, 2020 print issue under the headline: LA Black Catholic parish reopens, with restrictions .