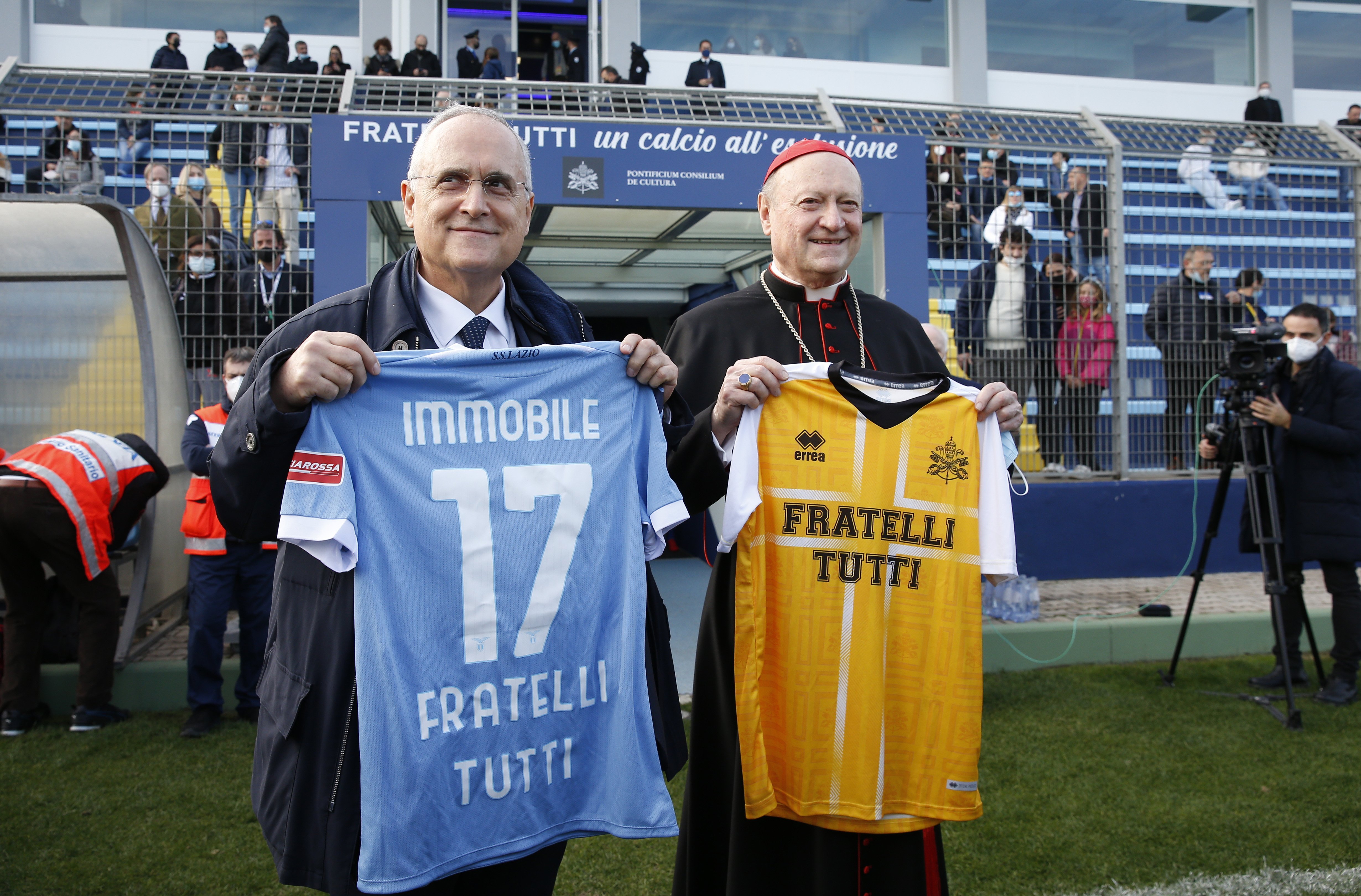 Claudio Lotito, president of the Lazio professional soccer club, and Cardinal Gianfranco Ravasi, president of the Pontifical Council for Culture, hold shirts for their respective teams before a friendly match between the Vatican's "Fratelli Tutti" squad and a team from the World Roma Organization at the Lazio Training Center in Formello near Rome Nov. 21, 2021. (CNS photo/Paul Haring)

Pope Francis established a new Vatican foundation that will promote initiatives based on the principles set out in his encyclical "Fratelli Tutti, on Fraternity and Social Friendship."

In a decree published by the Vatican Dec. 15, the pope said he would "gladly accede" to the request of the Fabbrica di San Pietro, the Vatican office charged with the maintenance and upkeep of St. Peter's Basilica, "to establish a foundation of religion and worship intended to collaborate in spreading the principles set forth" in his encyclical.

The "Fratelli Tutti" Foundation, he said, will "encourage initiatives linked to spirituality, art, education and dialogue with the world, around St. Peter's Basilica and in the embrace of its colonnade."

The decree, also known as a chirograph, was signed by the pope Dec. 8.

According to its statutes, the foundation, which will be headed by Cardinal Mauro Gambetti, archpriest of St. Peter's Basilica, will "support and plan" the promotion of art and faith.

It will also "invest in cultural and spiritual formation through events, experiences, paths and spiritual exercises" and "promote dialogue with cultures and other religions on the themes of the pope's recent encyclical to build a 'social alliance.'"

Among the goals of the "Fratelli Tutti" Foundation will be to promote a "culture of peace" as well as "new encounters" that are "nourished by social dialogue, the sense of social forgiveness."

It will also sponsor initiatives that foster "the development of fraternal humanism" aimed at promoting "the principles of freedom, equality and fraternity, conditions for building a 'universal love' that recognizes and protects the dignity of persons" and the environment.