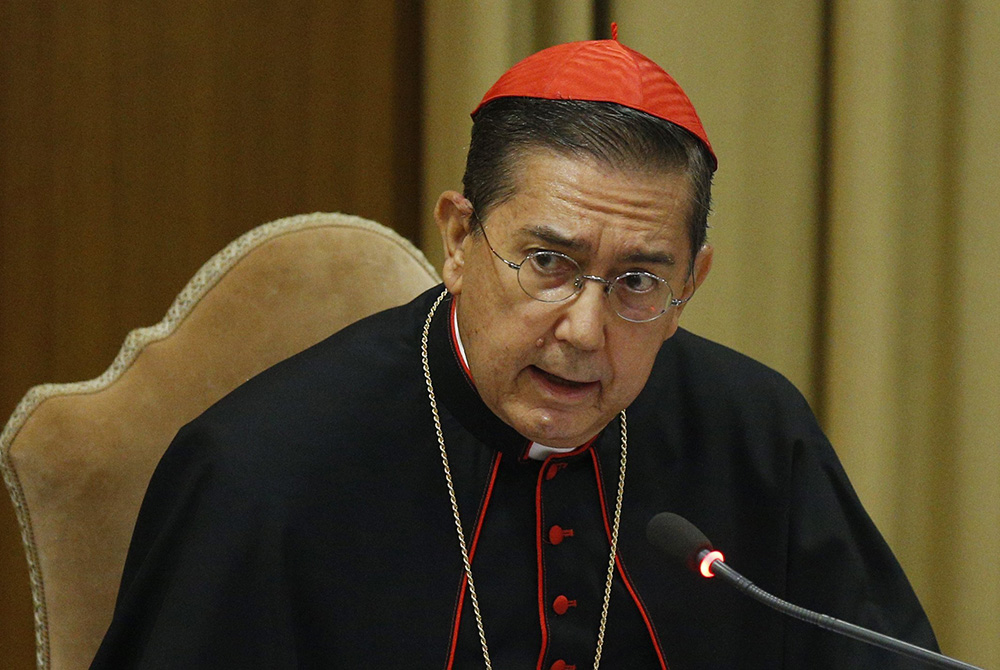 Cardinal Miguel Ángel Ayuso Guixot, president of the Pontifical Council for Interreligious Dialogue, speaks at a news conference for the release of Pope Francis' encyclical, "Fratelli Tutti, on Fraternity and Social Friendship," at the Vatican in this Oct. 4, 2020, file photo. (CNS/Paul Haring)

One year after the release of Pope Francis' encyclical Fratelli Tutti, Filipino Cardinal Luis Antonio Tagle said the pope's call for greater human fraternity must lead to a rejection of populist leaders who cloak their political agendas with religious messages or images.

"Populist demagogues' use or misuse of religion for their interests undermine efforts that develop interreligious relationships and friendships," said Tagle, who was archbishop of Manila since 2011, before being tapped by Pope Francis in 2019 to head the Vatican's Congregation for the Evangelization of Peoples.

The cardinal's remarks came during a Nov. 8-9 conference on "The Culture of Encounter: The Future of Intercultural and Interreligious Dialogue," organized by the Jesuit-run journal La Civiltà Cattolica and the Berkley Center for Religion, Peace and World Affairs at Georgetown University.

Tagle went on to cite studies that evidence that many people who are excluded from the alleged or promised benefits of the modern age have become angry and susceptible to populist leaders.

"They become easy prey for demagogues who ignite their anger towards the so-called elites," he said. "These angry, frustrated people rally behind these messianic figures," he continued, adding that some such figures utilize religious language and images to fuel anger. 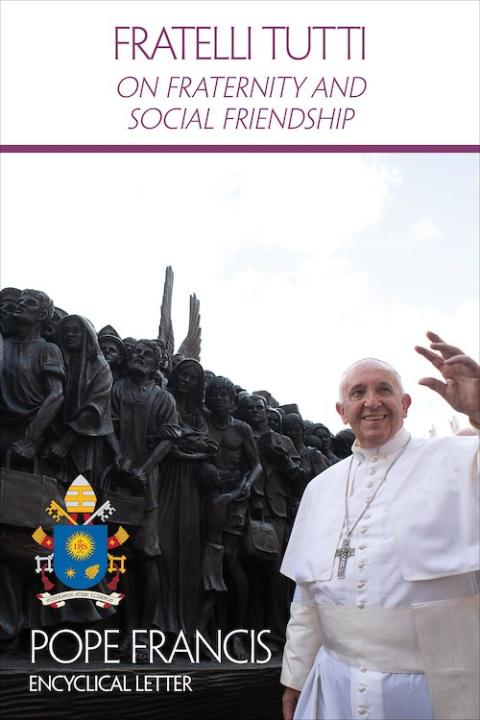 The cover of the English edition of Pope Francis' encyclical, "Fratelli Tutti, on Fraternity and Social Friendship" (CNS/U.S. Conference of Catholic Bishops)

The conference took place against the backdrop of the COVID-19 pandemic, the ongoing United Nations climate summit in Scotland, rising tides of populist movements and the recent launch of Pope Francis' newly revamped global synod process.

One recurring theme during the two-day event was that interreligious and intercultural dialogue is not something that can be left up to experts or religious leaders. For Francis, panelists insisted, it is something to be done neighbor to neighbor as brother and sister.

In opening the conference, Jesuit Fr. Antonio Spadaro, editor-in-chief of La Civiltà Cattolica, said that, following Pope Francis' "Document on Human Fraternity," which the pope signed in February 2019 with Sheikh Ahmed el-Tayeb, the grand imam of Egypt's Al-Azhar, and the subsequent 2020 encyclical Fratelli Tutti, the goal of the conference was to help the world better understand the thought and the urgency behind Pope Francis' emphasis on fraternity and solidarity.

During his keynote address, Spanish Cardinal Miguel Ángel Ayuso Guixot, offered a blunt summation of what Pope Francis' project has been in recent years: to remind the world that "We are all brothers and sisters. Stop."

As president of the Pontifical Council for Interreligious Dialogue, Ayuso lamented that "solidarity is a word that is not always well received," adding that "in certain situations, it has become a dirty word."

For Ayuso, a scholar of Islam, the encyclical can be summed up in three major messages: love for all; the importance of service in order to heal the wounds of humanity; and the need to work together for peace. 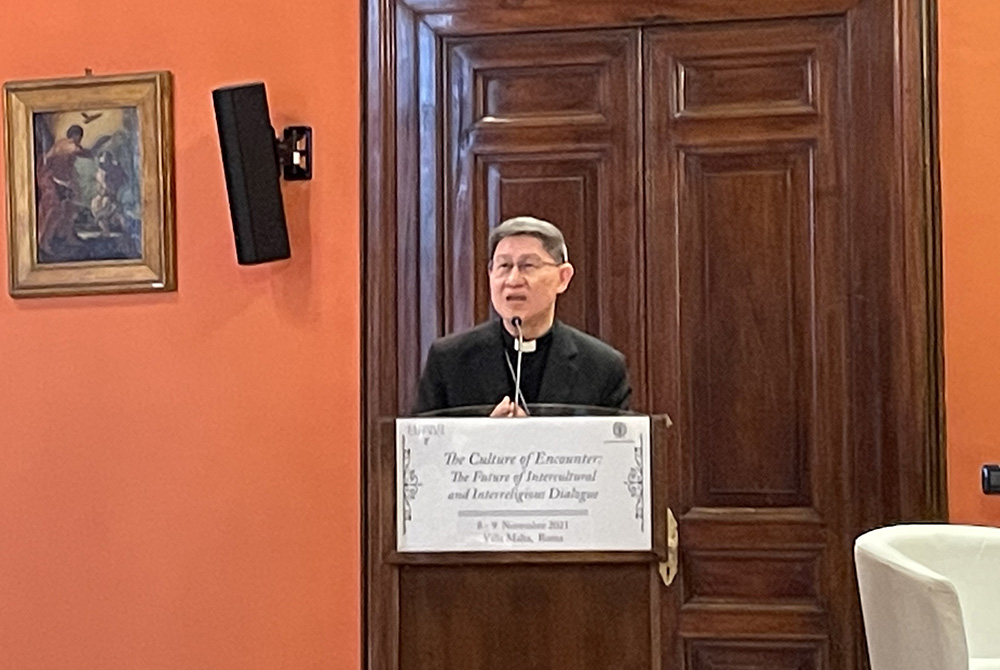 Similarly, Tagle said that truth, justice and forgiveness are an antidote to societal divisions, telling those in attendance that fraternity and friendship is not a "cute thing" but rather accomplished by "entering into the wounds" of those who are suffering.

Tagle went on to hail Fratelli Tutti's call for greater interreligious engagement as a natural development of the teachings of the Second Vatican Council.

A key message of Vatican II, said Tagle, is that "no one may feel like a stranger in the Christian community."

"Pope Francis is not inventing something new. Pope Francis is receiving, as pope, as the bishop of Rome, this legacy of Vatican II. He reappropriates it and, given the new context, he develops it," Tagle observed.

He specifically highlighted the synod process, where the church is seeking to engage those on the peripheries of the church or even those outside of it, as a mechanism for accomplishing this.

Synodality, he said, requires friendship, dialogue and seeking understanding between different theological approaches, charisms and ministries in the church.

"A synodal church walks with and for the whole of humanity, not just for itself," he said.

In addition to the keynote addresses by the two cardinals, several panels discussed the innovations of Fratelli Tutti in the life of the church and beyond.

Inspired by the greater focus on human fraternity, he noted that the Muslim Council of Elders has launched several initiatives with Arab organizations to enact new codes of ethics that promote human fraternity and a work against fostering hate in media outlets.

Salesian Sr. Alessandra Smerilli, interim secretary of the Dicastery for Promoting Integral Human Development, said that in the spirit of Fratelli Tutti, within her Vatican department, no single project is commenced without determining ways to collaborate with others.

The lesson from the encyclical, she said the crisis of the world "cannot be understood, studied or faced separately."

Bishop Paul Tighe, secretary of the Pontifical Council for Culture, observed that "dialogue is not simply a technique," but begins with a commitment and a particular attitude. He specifically offered examples of sports, art, literature and music as a way of finding a "common language that different people speak."

While Fratelli Tutti may have only been released one year ago, Ayuso noted that it has already reoriented the way Catholics should operate, be they in pontifical congregations or personal relationships: "Side by side, hand by hand."