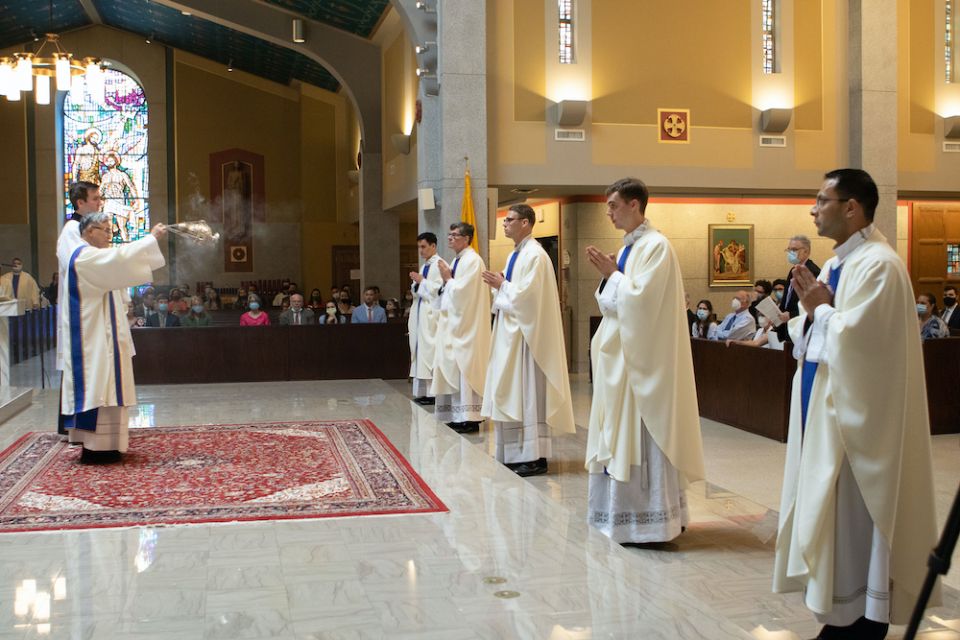 It's ordination season across dioceses in the United States, and some dioceses are holding ceremonies with a traditional bent, like it's 2019.

At Philadelphia's Cathedral Basilica of Sts. Peter and Paul June 20, the ordination included a large seating of priests, many of them elderly, bunched together without masks.

Still most U.S. parishes are paying attention to what it takes to operate safely as phased-in openings of churches occur, according to Eric Spacek, risk control manager for Church Mutual Insurance, based in Merrill, Wisconsin. Spacek, speaking from his home in Des Moines, Iowa, told NCR in a phone interview that his company is preaching the gospel of the two Ds: distance and disinfection. 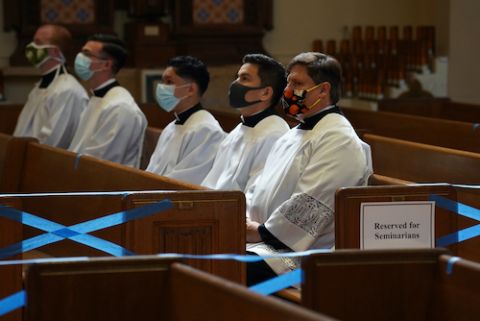 Seminarians wear face masks as they sit in a designated area prior to an ordination Mass June 20, 2020, at St. Agnes Cathedral in Rockville Centre, New York.(CNS/Long Island Catholic/Gregory A. Shemitz)

And he wants to add a C: communication. Parishioners, he said, need to know what to expect when they step back to Sunday Mass. "It's important to clarify expectations," he told NCR.

The process for a safe reopening begins in the parish parking lot, said Spacek, where the returning parishioner will be directed to a properly spaced spot.

Here are some of the best practices that a returning parishioner (we'll call her Sally), will experience upon returning to Mass after a springtime hiatus:

Sally will spot an easily identified sign pointing to the church entrance. Churches, said Spacek, should have separate entrances and exits, so as not to encourage rotating groups from bumping into each other.

Once Sally gets to the church entrance, she will be greeted by an usher attired with gloves who will open the doors. But first she will pass through a temperature check and offered a facemask, if she doesn't already have one.

An usher will then seat Sally, with a minimum of 113 square feet separating her from the next worshiper. (If Sally arrives with members of her own household, they will be allowed to sit together). Sally likes to sit in the back, but not today: Seating is done from the front, to the back, until the church has filled its legal capacity, which now, according to the locality, ranges from 25% to 50% in most regions.

There are no holy water fonts available. The same applies for common hymnals and offertory baskets (anything that can be touched more than once is to be discarded).

Sally likes church music, but it won't be available at the post-pandemic Mass. There is no choir (choral singing is considered particularly dangerous. In one case in the State of Washington, a church choir practice infected 61 members, and three of those died).

The priest celebrant is either masked, or maintaining a 6-foot distance from anyone around him. He is wearing gloves for the distribution of Communion. There is no physical greeting of peace. Depending on the diocese, Sally will not be able to receive Communion on the tongue, but other dioceses continue to allow that option.

"Go in peace," intones the priest, indicating the end of the Mass. But that doesn't mean the end of safe practices. There is a need, said Spacek, to "try and control the dismissal as much as you can."

Ushers direct congregants to leave, with the back rows leaving first. Forget stopping and saying hello — the goal is to move congregants out quickly and to discourage any kind of fellowship that might preclude proper social distancing.

After Mass is over, and the congregation has dispersed, parish workers will disinfect each pew to prepare for the next Mass. The disinfectant products will need to linger for up to 10 minutes to be fully effective.

The safety process can begin well before Mass. Even before attending, parishioners in many places will reserve a spot, via email, to fit into the allowable legal limit for church capacity.

Those concerned about pandemic safety will find solace in how the ceremonies in many June ordinations were performed in dioceses this year, with social distancing enforced at this year's ceremonies for the Archdiocese of Washington.

Crowds were noticeably smaller, and participants largely practiced social distancing, although in some cases the ordination rites, including the praying over of candidates, precluded doing that perfectly.

There remain, however, outbreaks of contention between local public health officials and Catholic leaders, perhaps most vividly in the Archdiocese of San Francisco, led by Archbishop Salvatore Cordileone.

Dennis J. Herrera, San Francisco city attorney, sent a letter to the archdiocese, giving it till June 30 to come into compliance with Public Health Orders. Herrera's letter stated that indoor Masses at Sts. Peter and Paul, Star of the Sea, and St. Mary of the Assumption, churches in the city, violated laws limiting indoor church gatherings to 12 or fewer people for funerals or to small livestreaming events.

The letter also cited a lack of mask wearing among priests and altar servers. "We look to you as partners and expect your compliance," the letter stated.

Mike Brown, a spokesman for the archdiocese, told NCR July 1 that the church in San Francisco wants to obey health laws. "There is no resistance to this," he said, referring to the city regulations. Cordileone, he said, has communicated to his priests that "he doesn't want public health policy violated."

Brown said the disconnect may have happened because of confusion over differing regulations across three counties comprising the archdiocese, as well as changes in reopening regulations as the COVID-19 virus outbreak has expanded and contracted. 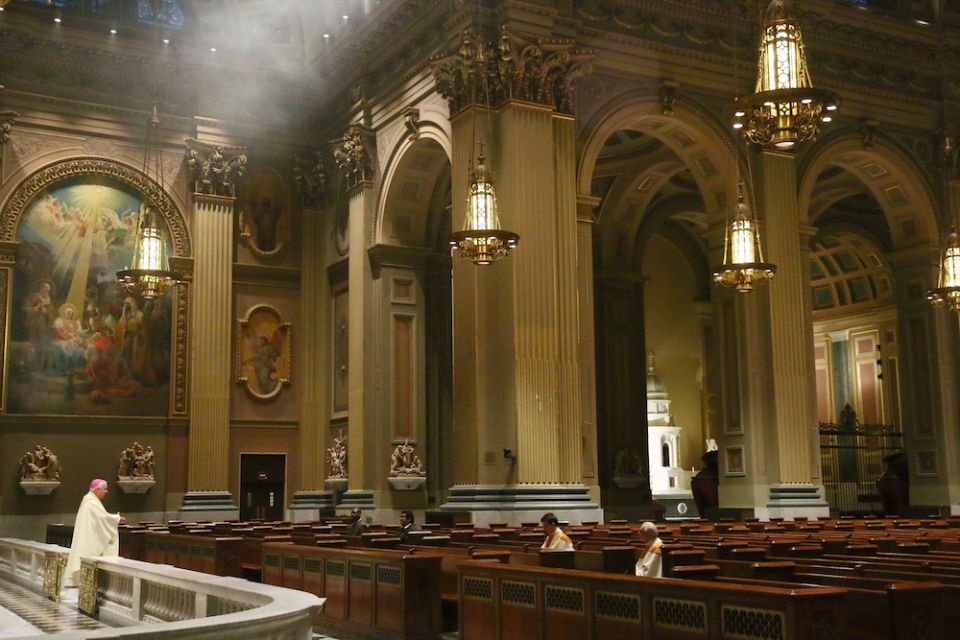 For Spacek it's become part of a new cliché: This will be the new normal, similar to the ways people have learned to act in grocery stores during the pandemic. So far most parishes are following guidelines, he said. "I've heard anecdotally things have gone well," said Spacek. For those having problems following the procedures, Church Mutual's website has information to educate pastors and parishioners.

Some may have imagined that a return to church would be a massive celebration, but expectations should be tempered, said Spacek. Expect that not everyone will or should come back to Mass, he said. Many older parishioners, particularly those vulnerable to the impact of the virus, will stay home. He advised parishes to keep up their social media presence begun this spring to allow people to participate virtually.

Catholics who want to attend Mass will have to learn this new normal. As states open up, and then some close again as COVID-19 cases rise, there is no apparent clear line back to the traditional days of liturgy, circa 2019.

Churchgoers should prepare for changes that could last months, if not years. "It will go on until there's a vaccine or a treatment that's widely available," said Spacek.

Read this next: Editorial: Let's be cautious about going back to church
A version of this story appeared in the July 24-Aug 6, 2020 print issue under the headline: Churchgoers return to a 'new normal' of distance and disinfectant .

For Appalachia pastors, reopening means walking with the poor and vulnerable