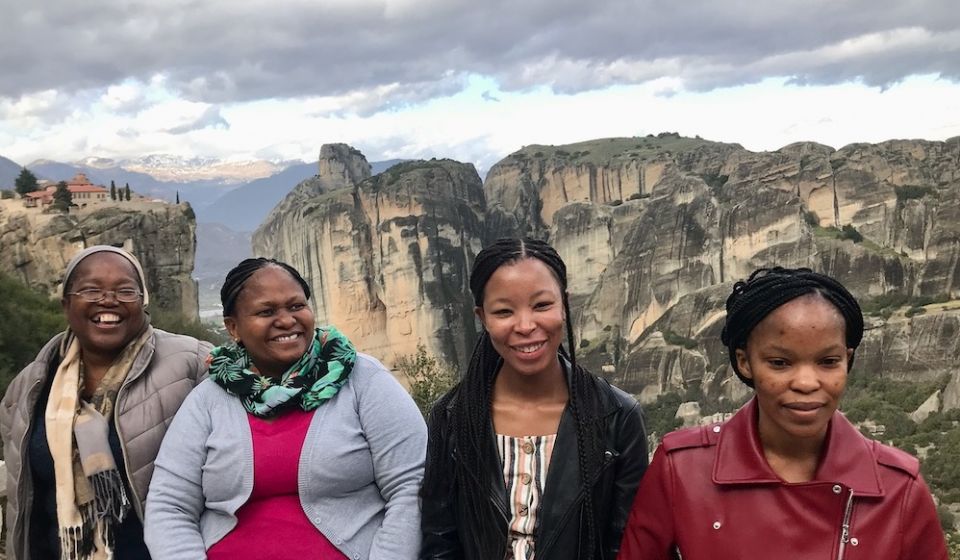 Two months ago, I was privileged to accompany a remarkable group of people touring ancient Christian sites in Greece. While our focus was on women leaders in early Christianity, I could not help but notice some impressive female leaders traveling right alongside us.

The witness of four women from South Africa was especially compelling. They helped us appreciate diverse understandings of God in an African cultural context.

At a pilgrimage prayer service dedicated to the "God Beyond all Names," Nontando Hadebe, reflected that in most African languages there are no pronouns: "So for our understanding of God, it is more the mystery, the greatness of God. … The gendering or masculinization of God is not something that you find in African traditional religions."

Further, "African religions are diverse and communal in origin. … They don't have a founder such as Mohammed, or Moses or Jesus." African traditional religious "emerged over centuries from communities gathering together, acquiring wisdom and reflecting on life."

For Africans, said Hadebe, "You express your faith in God in the way you treat your fellow human beings. … The understanding of what it means to be human is you are human in your relationship with others. Descartes says, 'I think therefore I am,' but African traditional religions say, 'I relate, therefore I am.' "

The African bishops' synodal document, "Ecclesia in Africa," and the work of African theologians greatly benefited inculturation and evangelization, she said. Cultural values from African traditional religions have been appropriated and reflected in African Christianity "so that Christianity has an African face." For example, the idea of the church "as the extended family of God" incorporates African communal values.

A member of the Circle of Concerned African Women Theologians, she is passionate about gender equality, Africanization and social justice. These she brings to her weekly radio program with Radio Veritas, which is the only Catholic radio channel in South Africa and reaches 4 million people.

Thanks to Hadebe's initiative and encouragement, three other South African women — including two millennials — joined our pilgrimage. Their stories are fascinating.

Annastacia Mphuthi heads the Office of Divine Worship and Liturgy for the Johannesburg Archdiocese. In this capacity, she gives workshops in faith communities throughout the archdiocese, training people to be communion ministers, lectors and in other liturgical ministries.

Because of tribal beliefs about female menstruation, one problem Mphuthi frequently faces is that parish leaders — including priests and pastoral council members — sometimes resist permitting women to distribute Communion or proclaim the Word. "They believe the women are not supposed to be entering the sanctuary," she says.

With the support of her archbishop, Buti Tlhagale, Mphuthi works with communities telling them they "need to respect women" and that while inculturation is a value, "they must understand the church culture as well," and the church culture is to include women. Other liturgical elements that sometimes require education and intervention include appropriate times for dancing and drumming — fine at the "Gloria," but not at the "Agnus Dei (Lamb of God)." 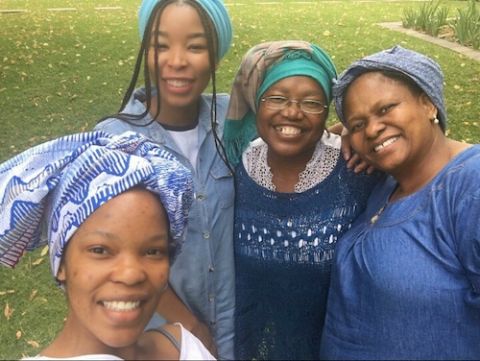 Maredi describes herself as a "born and bred" Catholic from South Africa. She studied theology with Hadebe, an unusual choice for a millennial woman. "It's a very embarrassing story," she laughs. The impetus came from reading "the buzz book" at the time, Dan Brown's The DaVinci Code: "I went to watch the movie 'Angels and Demons' with my sister, and there was Tom Hanks in the Vatican, able to interpret all those ancient languages and statues and history. … I decided 'He's very smart, I want to be able to do that.' I guess I've lived my life wanting to be like Tom Hanks."

After majoring in the Old Testament and Hebrew in college, Maredi had an opportunity to continue graduate studies but chose to enter the workforce instead. She now works at Baptist Theological College in Johannesburg, where she was recently promoted to academic program administrator, the first black woman to hold that position. She hopes to expand awareness of the need for pastors to address social ills which she finds "too rarely thought of" in South African seminaries.

Makgato describes herself as "a 24-year-old proud black woman" and cradle Catholic who "did all my sacraments," although her mother gave her the option of waiting to be confirmed. After having a spiritual experience one Christmas, Makgato changed from her initial career path as a beautician: "I don't know if I can call it a religious experience, but I think I had one. And being a beautician or becoming a makeup artist just didn't make sense to me anymore."

Makgato's grandmother had asked the family to attend Mass together before Christmas dinner.

"And just being in a church after I hadn't been to church in so long, really moved me," said Makgato. "It changed me, I guess. I don't know, maybe it was the service that was held, but it evoked something in me."

After the meal, Makgato found information about St. Augustine College in her grandmother's church newspaper. She is now pursuing a bachelor of theology degree, an experience she says is "quite amazing." 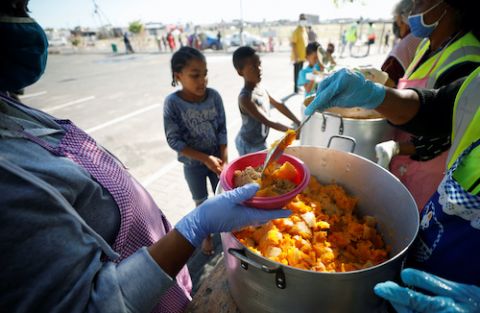 A food line at a school near Cape Town, South Africa, May 4. (CNS/Reuters/Mike Hutchings)

One of the things Makgato loves about the Catholic Church is that it is different from other churches in her culture that do not allow women to be in a room with men or with the tribal elders without a head covering and a long skirt: "So I think I also love the Roman Catholic Church because I'm allowed to be myself. And although it has not progressed to what we want it to be, I'm not told what I should wear."  She was confirmed last November.

Since returning home in mid-March I have been in regular communication with each of these South African "soul sisters." Like ours, their country is suffering greatly in lockdown from the coronavirus. Thankfully each of them is healthy, if anxious about their families and worried about the poverty stricken who have even fewer options than the poor in the U.S.

After a generous benefactor helped with her fees, Makgato is thrilled that she will be able to continue theology studies in June, but worried because classes will be online and her internet access is unreliable. She is also dismayed that so many government officials are "stealing food parcels that are meant to be given to the poor."

Because of the quarantine, neither Mphuthi nor her husband are working, so they are financially struggling. They are also concerned about their son who is frustrated by the pace of online classes and poor internet access. "But we give it all to God," she writes.

The peripatetic Hadebe is up to her usual good works including joining with the Circle of Concerned African Women Theologians "to respond to gendered aspects [of COVID-19] such as the rise in domestic violence" and aiding an ecumenical effort to help grassroots pastors who have lost income due to church closures. A week ago, on Soweto TV, she joined a panel of religious leaders addressing domestic violence through the story of the biblical Tamar.

Hadebe's reflection on COVID-19 is inspiring:  "It challenges us to answer the call that we are each other's keepers, the pain of the other is my pain — reflected in the African teaching of ubuntu — I am because we are, my humanity is tied up with yours. COVID-19 calls us to renew our commitment to each other for the common good."

A version of this story appeared in the June 26-July 9, 2020 print issue under the headline: Four African women share wisdom for a suffering world .