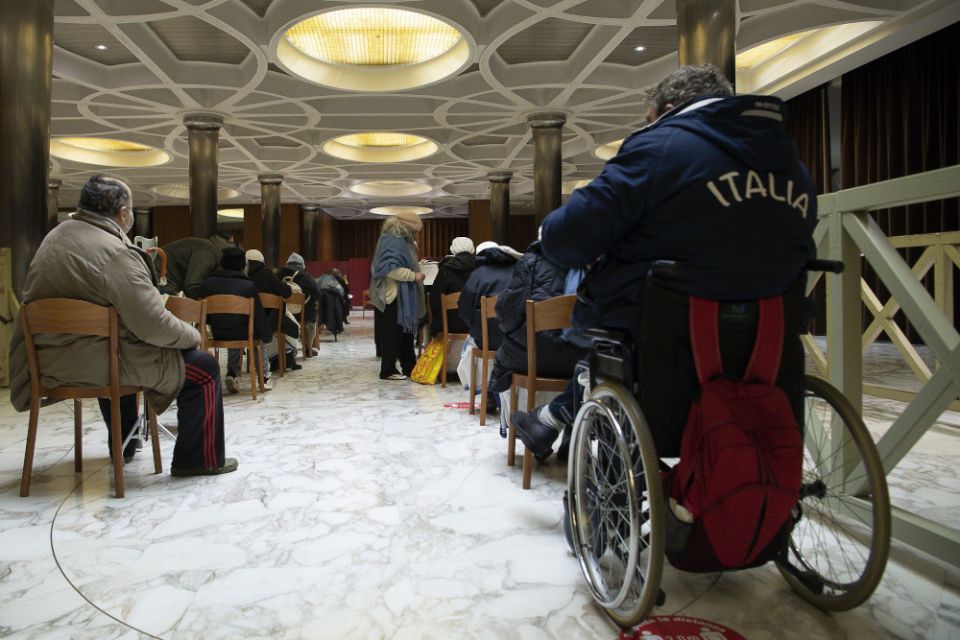 Homeless people receive the first dose of the COVID-19 vaccine in the atrium of the Paul VI hall at the Vatican Jan. 20, 2021. The Vatican said a first group of around 25 homeless people permanently housed in Vatican-owned care and residence facilities received the vaccine. (CNS photo/Vatican Media)

Vatican City — As the Vatican health service continued vaccinating Vatican residents and employees against COVID-19, it also began offering the vaccine to homeless people who live in Vatican-owned shelters.

The first 25 shelter residents were vaccinated Jan. 20, the Vatican said, and more will be given the vaccine in the coming days.

Members of the first group to receive the shots were men and women over the age of 60, most of whom have serious health problems, Vatican News reported. They live at the Vatican's newest shelter, the Palazzo Migliori, which is staffed by members of the Community of Sant'Egidio, and in the separate shelters for women and for men run by the Missionaries of Charity.

While most are Italian, the group also included people from Georgia and Romania. Some staff of the shelters also were vaccinated Jan. 20, along with Vatican employees who had appointments at the same time in the atrium of the Vatican audience hall.

Vatican photos showed the group accompanied by Cardinal Konrad Krajewski, the papal almoner, who himself had contracted the coronavirus and was released from the hospital Jan. 4 after 10 days of treatment for pneumonia.

"We thank the pope for the gift he's given us," Mario, a resident of the Palazzo Migliori, told Vatican News. "It went great; now I have added security."

Carlo Santoro, a member of the Sant'Egidio Community who helps at the shelter, said that many of the residents were afraid of the vaccine and of needles, but they also know there have been cases of COVID-19 in the shelters.

Health care workers explained the effects and long-term benefits of the vaccine, Santoro said. "Even if the importance of this gesture was not immediately clear to all of them," he said, "it will be a liberation for them because the only hope for getting out of this pandemic is to be vaccinated."

The Vatican began offering the Pfizer vaccine to its residents and employees Jan. 13. Both Pope Francis and retired Pope Benedict XVI have received the first of the two-dose vaccine.

The director of the Vatican health service, Dr. Andrea Arcangeli, had said in December that the Vatican had secured promises for enough doses to cover the employees, residents and pensioners who requested it. He did not, however, say exactly how many doses the Vatican purchased.

Why did the Vatican sack an anti-vaccine bishop in Puerto Rico?

What good is hell in the afterlife? Living through a global plague is hellish enough.