American priest translates 'Diary of a Wimpy Kid' into Latin 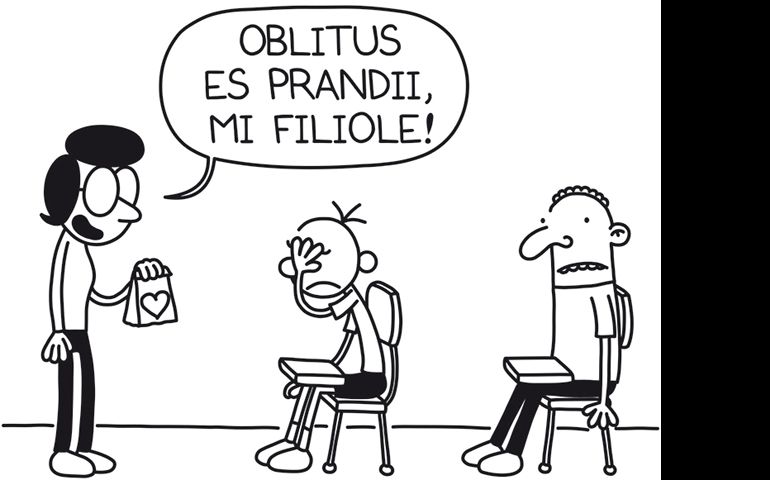 Vatican City — Msgr. Daniel Gallagher has faced a number of linguistic challenges as the man responsible for translating Pope Francis' Twitter feed into Latin, and then he was confronted with "heavy metal music."

Gallagher, an American who works at the Vatican's Office of Latin Letters, recently helped translate the best-selling children's book Diary of a Wimpy Kid into Latin, an ancient language that most people can't understand but that remains the official language of the Roman Catholic church.

After selling 150 million copies globally, Jeff Kinney's book about the trials and tribulations of school life made its Latin debut this week as Commentarii de Inepto Puero.

The newest edition of the book is the brainchild of the Milan-based publisher Il Castoro, which teamed up with the Vatican's leading Latinist to translate the tale.

Gallagher said he was keen to translate "a great story" already read by his English-speaking nephews and nieces. "It's a story of a kid who has a kind of conversation when he has to make a choice on whether to be faithful to his friends or not. He makes the right choice," he said of the book's young protagonist, Greg Heffley.

Exploring the child's process of decision-making gives the story a good moral message, Gallagher said: "For me that's not just a Christian teaching, but a human teaching."

Despite his translation skills, Gallagher said he faced some difficulties in rendering a 21st-century story in an ancient language. "Overall, the difficulty wasn't in finding the right words, but in finding turns of phrase that were classical."

"I really tried to use the comic [Latin] authors, to use interjections that they would use for 'wow' and 'darn,' but there were a few terms that were pretty challenging," he said.

Ergo, "heavy metal music" became "musica metallica gravis," for example, and some wordplay had to be changed entirely. In one chapter, Gallagher decided to literally translate a game in which the children cross their fingers -- "a Christian symbol" that he said would not have existed in ancient Rome -- because it made the most sense for present-day readers.

Despite the difficulties, the small community of Latinists is enthusiastic about the value of translating modern literature. Il Castoro hopes its version of the Diary of a Wimpy Kid will be used by people learning Latin across Europe before publisher Abrams brings it to the U.S. in September.

Gallagher said the tale will help schoolchildren learn Latin despite the tricky grammar. "It is important for all students to see that Latin is not a dead or outdated language; you can still express today's thoughts in Latin," he said.

The pope's Latin Twitter account, curated by Gallagher, is testament to the everyday relevance the language can still have. The pope's Latin tweets have 348,000 followers, making it more popular than the pope's German account (262,000) and slightly less so than his French one (370,000).

"It surprises me how many people seriously follow to try to get their Latin back," said Gallagher, explaining that the interest extends beyond the Catholic world. "There are a lot of writers who are atheists, who have enormous esteem for what the church does to keep the language alive.

"Latin is a much wider phenomenon and patrimony to be preserved and promoted."

The soul of a Latinist: remembering our teacher Fr. Reginald Foster