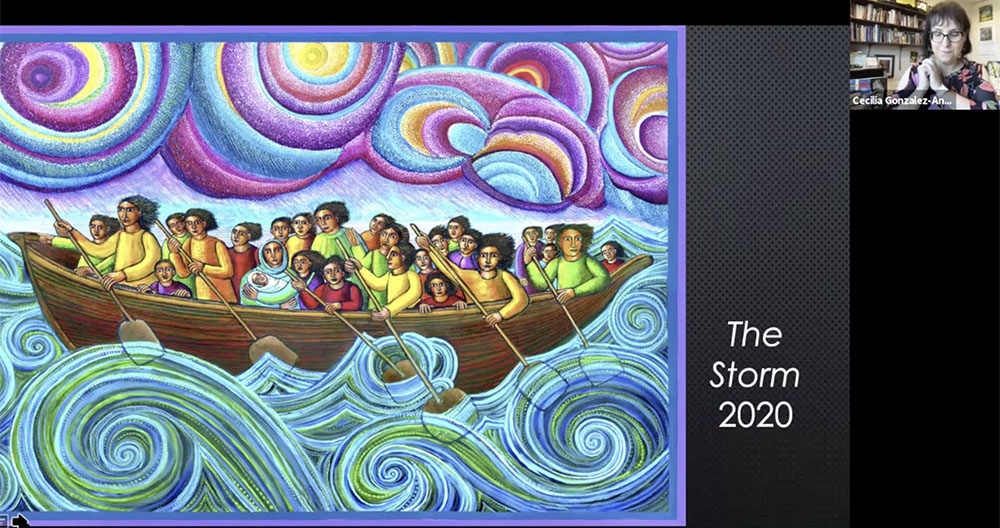 Cecilia González-Andrieu of Loyola Marymount University displays art by John August Swanson in her Aug. 5 closing keynote address, "From Our Abuelas to Us: Fe y Justicia in the Life of John August Swanson," during "¡El Futuro Is Here!: Cuentos y Recuerdos for the Journey," hosted by Dominican University in River Forest, Illinois. (NCR screenshot)

In response to the need to better recognize and celebrate the diversity of the Latino community, a conference designed to help Catholic colleges and universities better serve Latinx students, made an intentional effort to do just that.

In her opening remarks, Jeanette Rodríguez, a professor of theology and religious studies and couples and family therapy at Seattle University, commented on the role of "mestizaje" (mixed race) when talking about race and culture.

"As a people, we are made up of any combination of this [mestizaje], that is, you're American, African, Indigenous, Asian, etc.," Rodriguez said. "It's such a beautiful contribution to humanity."

Intersections of ethnicity, migration and race were also interwoven throughout some of the art pieces shared during the conference. 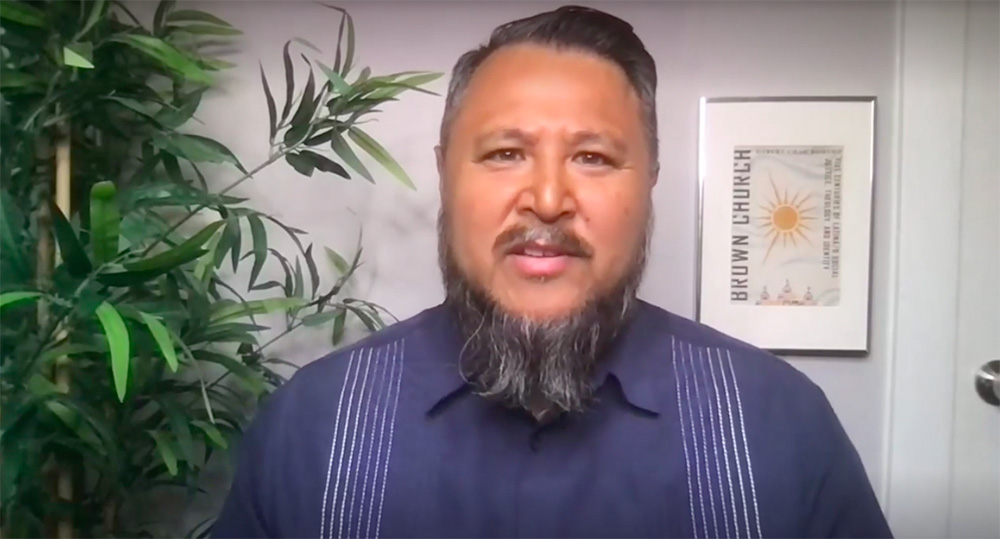 The Rev. Robert Chao Romero, a professor of Chicana/o Studies and Asian American Studies at the University of California at Los Angeles, reads his poem "I Am the Brown Church." (NCR screenshot)

The Rev. Robert Chao Romero, a professor of Chicana/o Studies and Asian American Studies at the University of California at Los Angeles who identifies as Asian-Latino, read his poem "I Am the Brown Church."

Dominican University alumni Jaqueline Romo shared her painting series "Monarca Migrante," which expresses the intersection of the Stations of the Cross, migration and the American dream.

Speakers also illustrated the different Latin American countries their families were from and how that influenced their current Latino identity.

In sharing about her childhood in Havana, Cecilia González-Andrieu, professor of theology at Loyola Marymount University in Los Angeles, explained that during nightly blackouts her grandmother would "take an otherwise frightening event and turn it into an opportunity for creativity."

In an effort to emphasize acculturation over assimilation, Rodríguez displayed her own family tree to highlight the mestizaje in her own life. Ecuador, Mexico, Puerto Rico, Germany, Vietnam and Cuba were all countries that were reflected within her parents, her siblings and their partners.

Community and comunión de los santos (communion of saints) were two themes listed as a focus for the event — the second conference after an inaugural one in 2018.

To foster a sense of community, on the second night of the conference each participant was sent an online gift card and encouraged to order from a Latinx restaurant around them. The "Closing the Distance" dinner allowed participants to break bread together virtually.

During these communal portions, participants reflected on the talks and information they had heard that day.

In response to Rodríguez's keynote, "Cuentos y Recuerdos: Stories, Memories and Dichos that Teach, Heal and Sustain," participants then reflected on the power of memory and the role storytelling plays in the healing process, and even shared dichos (sayings) from their own families.

Special prayer and attention were given to visual artist John August Swanson, originally set to be the closing keynote speaker on "From Our Abuelas to Us: Fe y Justicia in the Life of John August Swanson." Health issues prevented him from attending.

"La vida is fragile," González-Andrieu explained as she told the story of Swanson's life. She encouraged students to pay attention to the beauty and kinship around them and on their campuses.

And at the heart of the conference was spirituality and faith.

Opening and closing Mass was celebrated by Claretian Fr. Eddie De León. The bilingual Masses were livestreamed from Holy Rosary Church in Chicago.

During the closing Mass, De León preached on the topic of hope and God lifting up the weak. He asked participants to reflect on how they describe not just themselves, but God, by reflection on two questions: "Quien eres tu?" ("Who are you?") and "Who do you say that I am?"

A version of this story appeared in the Sept 3-16, 2021 print issue under the headline: Diversity of Latino college students.