Holy Week music sets a high bar, but one church rises to the challenge 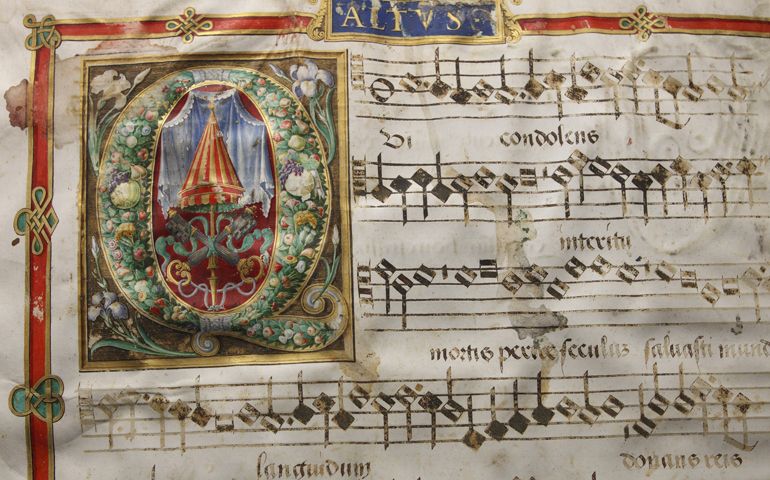 Philadelphia — Think Christmas, and carols come to mind: "Joy to the World," "Silent Night," "The First Noel." But think of the other great Christian season -- Holy Week and Easter -- and most people draw a musical blank.

That's a shame, say church music experts, because the great trove of Holy Week music is firmly rooted in church, where, depending on location, tradition and taste, believers hear everything from folk music to Gregorian chant, from classical requiem Masses to Passions by modern composers.

"The music written for Holy Week is some of the richest in our literature," said David Ludwig, dean of artistic programs at Curtis Institute of Music in Philadelphia.

On Palm Sunday, there's "All Glory, Laud and Honor" by Theodulph, bishop of Orleans. On Maundy Thursday, many churches will sing the African-American spiritual "Were You There When They Crucified my Lord?" And often during Lent, there's "Panis Angelicus" ("Bread of Angels") by Cesar Franck.

But setting the bar is Johann Sebastian Bach, whose two Easter masterpieces, "St. John Passion" and "St. Matthew Passion," have so moved listeners through the years that what began as one congregation's prayer is now performed in concert around the world throughout the year.

This week, First Presbyterian Church in Center City, Philadelphia, is bringing Bach back to his Good Friday roots by presenting his "St. John Passion" as he did -- not as performance but as prayer. Though the Gospel is solemn, it is as much about hope and glory as it is about death.

Here the retelling of John's Holy Week story will be interspersed with sermons, meditations and congregational hymns, as it was during Bach's day. It's a rare and ambitious undertaking for a local congregation.

Rehearsing last week, music director Andrew Senn reflected on the piece, which emanates from the Lutheran Reformation tradition. "Seventy-five percent of the text is straight out of John's Gospel," said Senn, an Episcopalian raised a Lutheran and now conducting in a Presbyterian church. "It has to be important to every Christian denomination."

The event is a "one-off," said Senn, who has Bach's monogram tattooed on his shoulder. The presentation replaces the congregation's customary "Seven Last Words of Christ" Good Friday service. This year, with the makeup of his choir, the liturgical cycle featuring the Gospel of John and the musical mood of the congregation, things came together to justify the effort and expense of the work.

His choir of 18 and his imported baroque orchestra may be half the size of some of the big stage productions. But his paid, all-audition choir is clearly up to the task. Tenor Jeffrey Halili, a deacon at the church who sings the critical evangelist role, is a professional opera singer. Like the Jewish cantor's task during the High Holy Days, his job is to make the text clear, he explained.

But for all the effort to be clear, most at First Church on Good Friday will need the text translation, since the words are being sung in their original German. It was not an easy decision for the church, Senn said, adding that only in Bach's German can "the sharp closing consonant sounds" so vital to the story emerge. And because the frequent reference to Jews makes the "St. John Passion" controversial to some, the word "Jews" is being replaced by "Judeans."

A congregational presentation of "St. John's Passion" is "unheard of, certainly in the U.S.," said Christopher Cock, director of choral and vocal activities at the Lutheran-affiliated Valparaiso University. Even when performed in church sanctuaries, as often happens, the work takes concert form.

For one, there's the matter of time. Churchgoers may find a three-hour sit on Good Friday to be a bit much. Then there's the cost of hiring an orchestra and the need to have strong soloists. With so many superior performances available, the professor said, "There is a danger it can become music of only specialists."

The Rev. Jesse Garner III, pastor at First Church, first heard his calling to ministry during a performance of the "St. John Passion" while a freshman at Yale. He attended out of support for a friend in the orchestra. "I wanted to be a good friend," not to hear the music, he said.

"I was so deeply moved by everything that evening that I got up the next morning and went to the university chapel. It was the first time I'd been in it all year." The subject, and Bach's handling of the subject, he said, brought him "one of the three or four seminal moments in my life."

Whether listeners this year experience a personal epiphany or simply some good music, music director Senn considers the Passion a no-lose proposition. "Open yourself up. Take a risk. Give it a whirl."

Culture | Holy Week music sets a high bar, but one church rises to the challenge