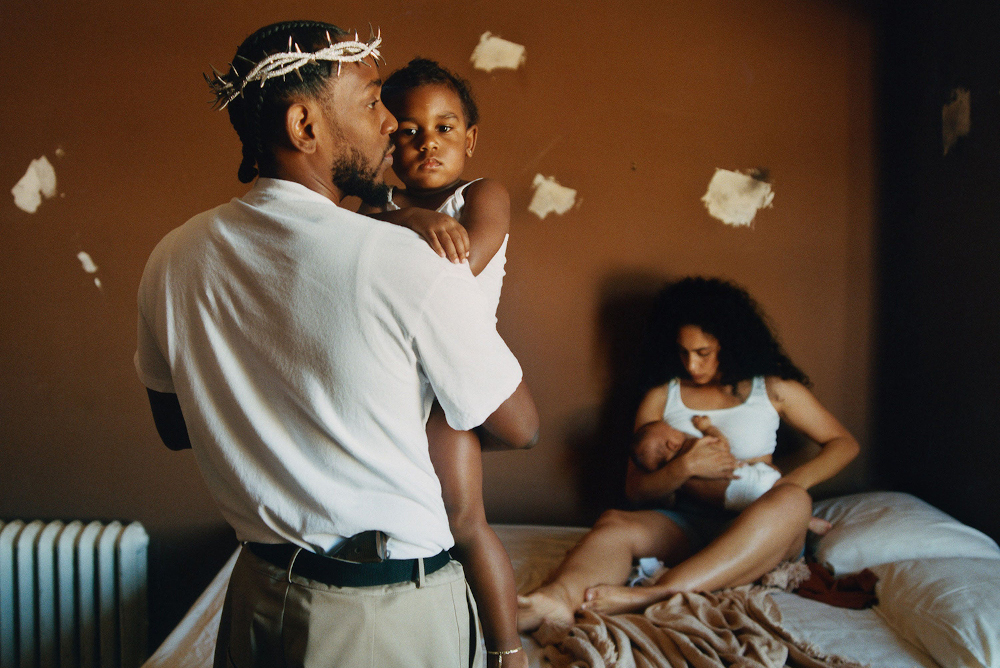 Kendrick Lamar and his family on the cover of his album, "Mr. Morale & the Big Steppers." (Photo by Renell Medrano)

Apparently, rap fans aren't the only ones who've been counting the days since Kendrick Lamar dropped his last album — the Pulitzer Prize-winning "DAMN." — five years ago on Good Friday.

Lamar has been counting the days as well: "I been going through something. One thousand eight hundred and fifty-five days," he warns at the start of his latest offering, "Mr. Morale & the Big Steppers" — sound advice for any prophetic encounter. "Be afraid."

The album, released in mid-May, bares several signals that Lamar sees himself as doing prophetic work, from the lyrics to the artwork.

"If God be the source then I am the plug talkin'," Lamar announces on the cut "Purple Hearts." For those who aren't fluent: "The plug" is a drug connection, the bridge between the drug dealer and the drug user. Lamar is saying that he is the bridge between God and the listener, delivering God's message. Lamar is echoing here one of the words the Hebrew Bible most often uses for prophets, naavi, or "spokesperson."

Lamar repeatedly shows on the album that he understands the essential task of prophetic work: to tell the uncomfortable truth. "Tell them, tell 'em, tell them the truth," a flurry of voices goad him on "United in Grief." "This is my undisputed truth," he proclaims on "Purple Hearts."

But the uncomfortable truth isn't delivered on the new album through the moralistic grandstanding we might expect from someone assuming the mantle of prophet. Instead, Lamar's truth-telling comes via vulnerable — albeit sometimes problematic — storytelling.

He opens by addressing his own struggles with depression, with going to therapy and taking medication. He defies the long-standing stigmas in Black communities about mental health by naming and reenacting community traumas, both contemporary and generational.

"I know the secrets, every other rapper sexually abused./I see them daily burying their pain in chains and tattoos," he says on "Mother I Sober."

In naming the toll that truth-telling as a career has had on his mental health, Lamar places himself in the company of some of the Jewish tradition's most revered prophetic voices. Moses, Elijah and Jonah were all so exasperated by their truth-telling work that each of them prayed that God might kill them. The Prophet Jeremiah was so melancholic that he's been nicknamed "The Weeping Prophet."

Jesus was so acquainted with sorrows — at one point falling down in the middle of the road to weep over his compatriots' refusal to listen to him — that his disciples thought he might be Jeremiah reincarnated.

One could argue that we suffer by not giving enough attention to the above episodes. They remind us that, contrary to the example of many TV preachers (they who have built lavish lifestyles by claiming they speak for God), the prophetic life is anything but glamorous. If faith communities seriously reflect on prophetic laments, from Moses' to Kendrick's, perhaps they might move beyond praising their prophets to organizing support systems for the seemingly inevitable mental health challenges they will face.

The cover art depicts Lamar donning a crown of thorns and a gun stuffed into the back of his pants while he cradles their 3-year-old daughter in his arms, while his partner, Whitney Alford, sits on their bed nursing their newborn. The crown of thorns may suggest that Lamar is aware of the costs of truth-telling: criticism, rejection, cancellation. He half expects that the people who offered hosannas when "DAMN." made him the voice of Black Lives Matter may yet yell "crucify him" by the end of this new album.

He's right to expect criticism, some of which may be warranted. One of the most contested tracks on "Mr. Morale" is the song "Auntie Diaries," where Kendrick talks about two trans relatives, to mixed reactions. "My auntie is a man now," Kendrick whispers as he launches into the story of how he witnessed his uncle's transition.

On the one hand, the song seems aimed at painting his trans relatives in a positive light. He shares that his uncle inspired his rap career, rapping they were "The first person I seen write a rap. That's when my life had changed."

In the later verses, however, he confesses his struggle to accept another family member's transition. "We didn't talk for a while, he seemed more distant. Wasn't comfortable around me, everything was offensive," he says, giving us a glimpse into how Lamar mistreated a cousin.

The crown of thorns may suggest that Lamar is aware of the costs of truth-telling: criticism, rejection, cancellation.

It's a rare and generous confession. He allows his own transphobia to represent the transphobia of the Black community at large. He criticizes the culture by offering up himself for criticism. He must have counted the cost: knowing that the might of hip-hop's hypermasculine culture will resist a positive representation of trans people, that some will criticize his embarrassing memories and that some will take issue with the way he chose to present his views.

But Lamar's use of a homophobic slur — the "F" word — throughout the song has raised eyebrows. The use of the slur may be an artistic choice to make a larger point about the way young Black boys are socialized to aspire to a men's club for which transantagonism and homophobia are the cover charge. "We ain't know no better," Kendrick says in defense of himself and his friends gleefully tossing the slur around. But for many the use of the "F" word by a cisgender, heterosexual man is as inappropriate and harmful as it is unnecessary and ominous.

"​​If a cis-het family member made a song like this about me, and consistently misgendered me the entire time, I'd be pretty heartbroken," poet and author of The Black Trans Prayerbook J. Mase III told me in an email interview. "His ongoing deadnaming throughout the song is going to give permission to a lot of transphobic people to merely tolerate (and disrespect) the Trans people they are around and blame those same people when they name the violence or become distant (much like Kendrick's cousin)."

Mase said Kendrick could have used other, less harmful methods of platforming trans people while being just as subversive. "What would it have looked like for him to create a song with a Trans rapper?" Mase asked.

I agree the "F" word is not for straight people to use. Oppressive epithets can be gutted of their power when their targets embrace them as symbols of pride. Civil rights activists did this with the word "criminal" when they intentionally filled up jails by breaking Jim Crow laws in the 1963 Birmingham campaign. Tyrion Lannister of "Game of Thrones," a fictional but no less profound prophet, once said about those who tried to shame him with the word "bastard": "Wear it like armor, and they can never hurt you with it."

But that same power is not present when someone who has never suffered under the weight of that slur assumes they can use it casually. It can't be turned into armor by those who've always wielded it as a weapon.

To be sure, I don't think Lamar meant to cause any harm. But sometimes impact matters more than intentions.

Which brings us back to the gun tucked into his belt in the album art, the crown of thorns on his head, surrounded by his family: It's possible it's his way of saying "I know they'll come for me and mine after they hear what I have to say." Perhaps this is the hill he is willing to die on.