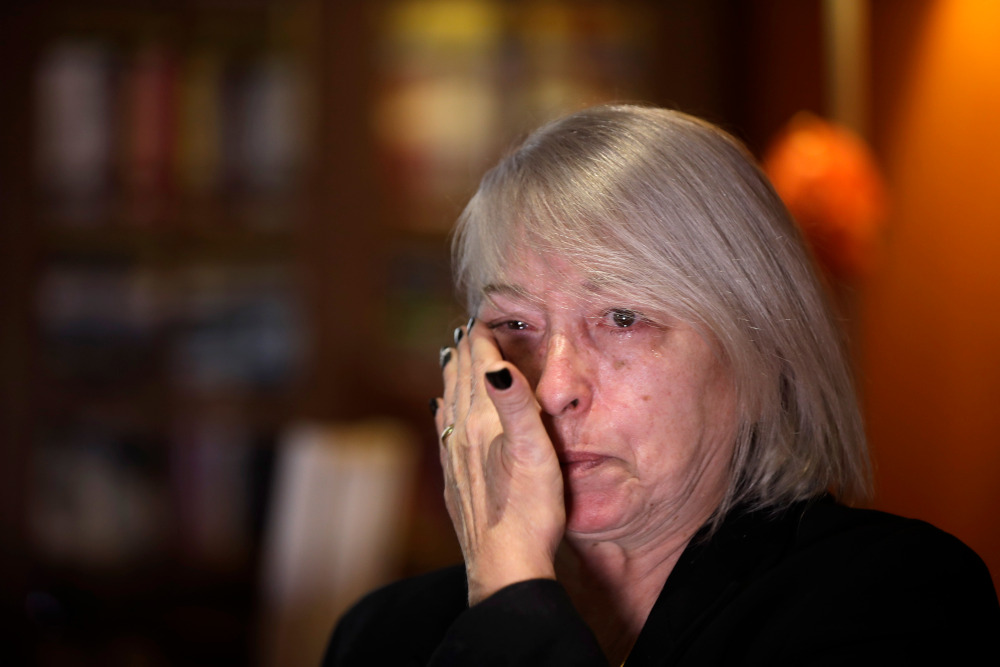 In this Friday, Jan. 31, 2020 file photo, Yolanda Martinez Garcia cries during an interview with the Associated Press at her home, in Milan, Italy. Her son was sexually abused by one of the priests of the Legion of Christ, a disgraced religious order. A judge in Milan ruled Tuesday, Feb. 16, 2021 that trial can go ahead in a case in which priests and lawyers of the Legion of Christ religious order are accused of offering to pay the family of a sexual abuse victim to lie to prosecutors. (AP File/Luca Bruno)

A judge in Milan has ruled that trial can go ahead in a case in which priests and lawyers of the Legion of Christ Catholic religious order are accused of offering to pay the family of a sexual abuse victim to lie to prosecutors.

During a preliminary hearing Tuesday, which was delayed by nearly a year because of the coronavirus pandemic, Judge Patrizia Nobile confirmed the charges of attempted extortion and obstruction of justice and set a May 13 trial date for the five suspects, said Daniela Cultrera, the lawyer for the victim's family.

The investigation is an offshoot of a case in which Italy's highest court in July upheld the conviction and 6 1/2-year prison sentence for a defrocked Legion priest, Vladimir Resendiz, for sexually abusing boys at the Legion's youth seminary in northern Italy.

That case was sparked in 2013 when one of Resendiz's victims confided in his therapist about the abuse he suffered while he was a middle schooler at the seminary. As a mandated reporter, the therapist informed law enforcement authorities, who opened the probe.

At the time, the Legion was emerging from years of Vatican-mandated reform following revelations that the founder of the Mexico-based order was a religious fraud who sexually abused his seminarians and built a secretive, cult-like order to hide his crimes. According to Cultrera, a new sex abuse scandal going public in Italy was the last thing the Legion wanted as it hoped to regain its independence from Vatican oversight.

Prosecutors allege the Legion hierarchy in Italy and their lawyers offered the family of the victim 15,000 euros in October 2013 in exchange for a settlement agreement in which the son ruled out having been abused by Resendiz and regardless didn't remember. It said if the family members were ever called to testify, they were to make the same declarations, denying the abuse that they had already reported to prosecutors.

The victim's mother, Yolanda Martinez, told The Associated Press last year the family was aghast at the Legion's behavior and refused to sign. A few months later, the Legion proposed a revised offer acknowledging the abuse occurred but requiring the family to pay back double the 15,000 euros if anyone violated the confidentiality agreement.

For prosecutors, that amounts to attempted extortion and obstruction of justice. The family is seeking unspecified damages as a civil party in the case.

The Legion declined to comment ahead of the trial. Spokesman the Rev. Aaron Smith noted Resendiz is no longer a priest or member of the order, though he said the Legion was "willing to cooperate with the authorities as needed."

Resendiz was last believed to be living in his native Mexico, but it's not immediately clear when or if extradition proceedings would begin following the high court ruling upholding his conviction and sentence.

The Resendiz case and the follow-on trial are just some of the new sex abuse and cover-up scandals that have rocked the Legion a decade after the Holy See imposed a reform process to purify it. The scandals have called into question the reform itself, given even the papal delegate in charge was part of the cover-ups.  The Legion has vowed to do better.