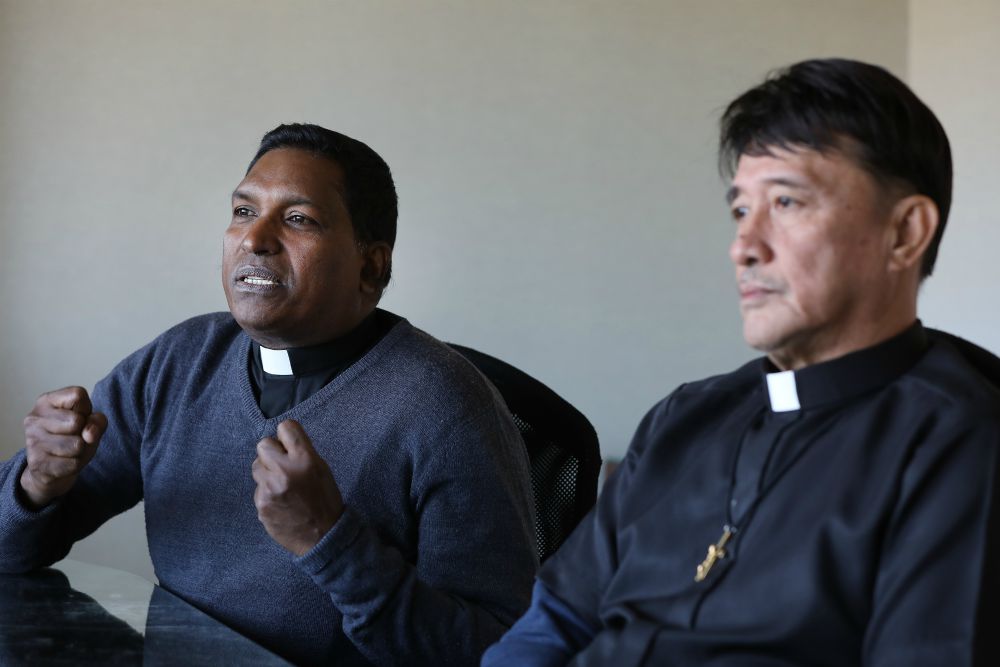 Franciscan Fr. Neville Fernando was talking to a friend outside St. Sebastian's church in Negombo, Sri Lanka, when he saw a young man with a backpack walk past. As he entered the main gates of the church, Fernando heard a loud explosion. Black smoke was bellowing from the structure. He saw blood and bodies all around. "My initial thought was kids were bursting firecrackers to celebrate Easter. But the sound was too deafening," said Fernando. The backpacker was later identified as one of the Easter bombers.

The Easter Sunday terror bombing in Sri Lanka left 290 people dead and is considered the worst since the 30-year civil war in the island nation. Despite assurances from the government, Catholics in Sri Lanka still live in fear, said Fernando. 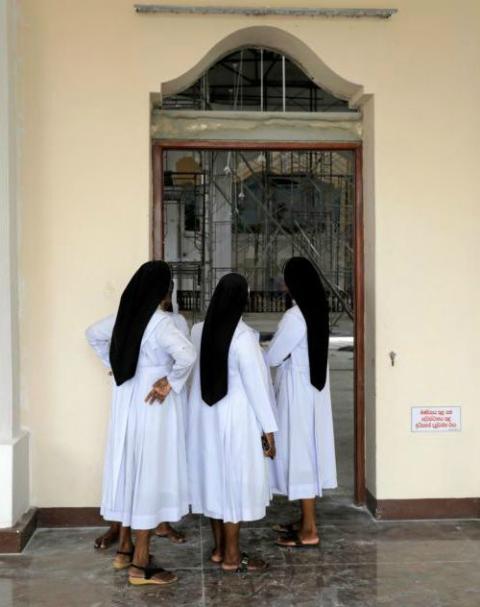 Women religious in Negombo, Sri Lanka, look inside St. Sebastian's Church June 3. The church was among those bombed by terrorists on Easter April 21. (CNS/Reuters/Dinuka Liyanawatte)

The priest is in the United States to attend several events bringing attention to persecution of Christian minorities across the globe. He was accompanied by Oblate Fr. Romeo Saniel from the Philippines. The first of these events, "Listening to Survivors of Religious Persecution: The Call for Religious Freedom," was held at the United Nations headquarters in New York on Nov. 20. It was hosted by Aid to the Church in Need-USA, which is headquartered here, and the Permanent Observer Mission of the Holy See to the United Nations.

The second event, a Night of Witness Vespers service, was held at the Basilica of the National Shrine of the Immaculate Conception in Washington Nov. 23.

Post the bombings in Sri Lanka, Cardinal Malcolm Ranjith urged the faithful to refrain from violence against their Muslim neighbors. "The situation was tense. Funerals took place under tight security," said Fernando. But this wasn't the only time Christians in Sri Lanka felt unsafe. "Since 2009, Sinhalese Buddhist nationalists have increasingly attacked Christians. In recent years, Hindu nationalists have also attacked churches in the Eastern province," he said.

Despite the persecution, the church in Sri Lanka is working tirelessly with leaders of other faiths to strengthen inter-faith dialogue and build religious harmony. The Franciscan friars, including Fernando, have organized many meetings with faith leaders in recent months. "The key is to bring people together and hold the government accountable for security of all citizens," he said.

Leading the Philippines Catholic Community towards religious harmony and healing is Saniel. A few days before he was installed as apostolic administrator of the Vicariate of Jolo in southern Philippines, an ISIS-inspired group bombed Mount Carmel Cathedral on Jan. 27.

The twin explosions claimed 20 lives and injured between 80 and 116 people. It was during this time that Pope Francis wrote to Saniel. "Pope Francis told me to take care of the victims and ensure they don't feel abandoned. But most importantly, he asked that the tragedy not destroy the harmony between Muslims and Christians in the area," said Saniel.

Jolo, a predominantly a Muslim region, has a Christian population of about 3%. The community has historically enjoyed a cordial relationship with Muslims, said Saniel, who pointed out that the bombers were foreigners, from Indonesia. "The bombing became a blessing in disguise for us. Our faith grew stronger. Our Muslim neighbors began to form a protective circle around the church during Mass time. They approached us to renew dialogue for peace," he said.

In Catholic majority Philippines, Saniel broke ground when months after the blast he participated in iftar — the breaking of fast during Ramadan — at a local mosque, signaling unity with the Muslims. "Never before were Catholics invited to a mosque for iftar. The imam of the mosque told me he was educated in a Catholic institution and had a lot of respect for us. He assured us that as long as he's imam of the mosque, no radicalization would be tolerated."

Saniel's work in interfaith dialogue is testimony to his unwavering commitment to the cause. Seventeen years ago, on May 4, 2002, he survived an assassination attempt through sheer luck. "When I was distributing Holy Communion to sick Christians in downtown Jolo, I noticed two young Muslims walking behind me. Suddenly, one of them pulled out his gun. I felt the cold nozzle of a .45 caliber pistol at the back of my head, then I heard a click. Miraculously, the weapon jammed." He was whisked away from the scene by his military escort, who fired warning shots in the air. 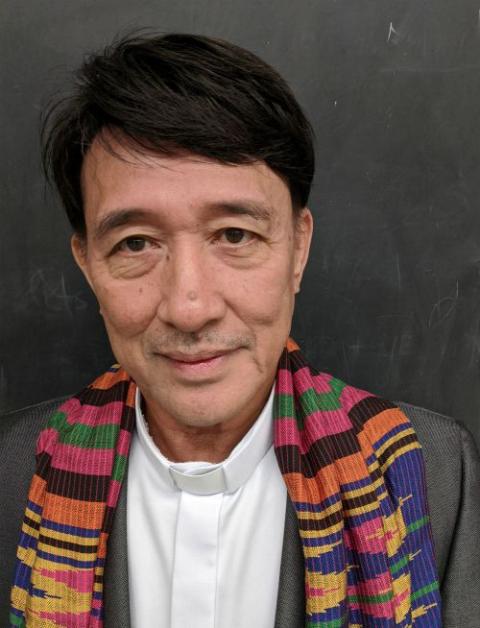 Oblate Fr. Romeo Saniel, apostolic administrator of the Vicariate of Jolo in southern Philippines (Courtesy of Aid to the Church in Need)

Since then, Saniel has worked tirelessly to build bridges with the Islamic community. He's involved in developing economic projects for Muslim youth and granting scholarships to higher education.

He also credits President Rodrigo Duterte for stepping up security for the Christian minorities living in the region. Duterte has been openly feuding with members of the Catholic leadership in Philippines, who criticize his violent war on drugs.

Saniel said that Duterte was "supportive and compassionate" after the church bombings. "But he behaves differently when he goes to Manila. Maybe that's his style. But now he has become more open to criticism, unlike before. I guess his way of protecting his [anti-drug] campaign is by threatening the church, threatening to expose the sexual abuse happening within." Saniel said the church cannot be passive as Duterte 's men go on a bloody campaign against drug users. "We feel that the approach should be medical and not criminal," he said. The Catholic Church is working with lay members to rehabilitate drug users in the country.

Saniel's top priority now is the safety of Catholics living in Jolo. Apart from inter-faith dialogue, he has seen the renewed enthusiasm among young Christians towards their faith. "In the coming years, the church in Philippines will be sending more missionaries all over the world. And we'll be helping other Asian countries where Christians are minorities, because Jolo can speak from its experience," he said.