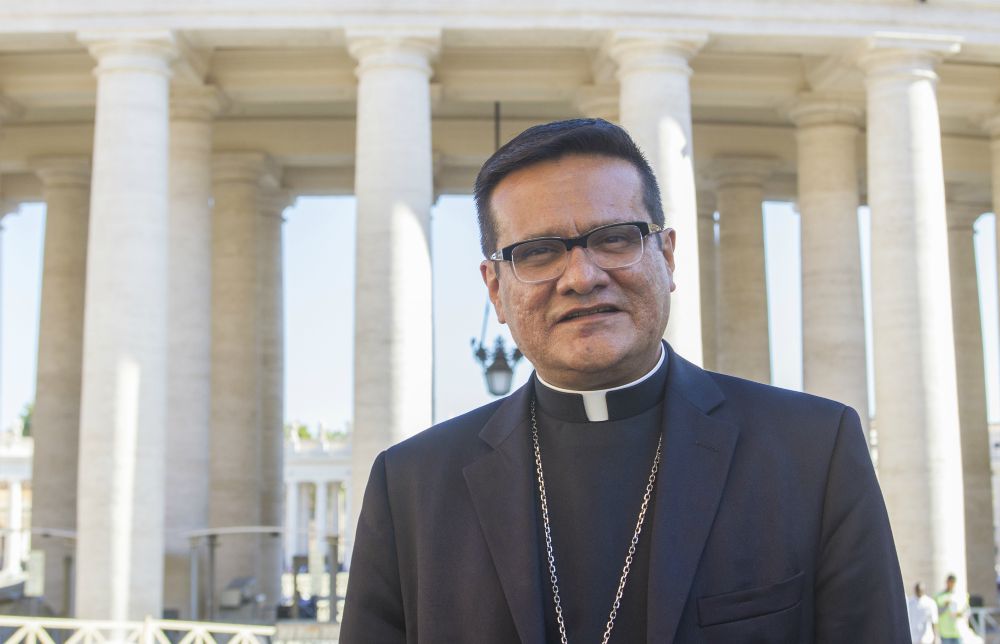 Auxiliary Bishop Arturo Cepeda of Detroit stands in St. Peter's Square Sept. 26, 2016, at the Vatican. He and other U.S. Hispanic leaders were on a five-day pilgrimage to the Vatican as part of their preparation for launching the V Encuentro process. (CNS/Robert Duncan)

Latino Catholics in Detroit, many of them Mexican migrants, know what it's like to struggle in a border town.

Here the border is with Canada, a reality that complicates existence for the undocumented due to an enhanced presence of U.S. Immigration and Customs Enforcement (ICE) officials.

That reality was an underlying theme of the meeting at Sacred Heart Seminary here Dec. 9, a part of the national V Encuentro process, which brings together Latino Catholics to discuss their lives, struggles and faith.

Besides immigration, a few hundred participants from the Archdiocese of Detroit, which includes the city and suburbs in a six-county region, also prayed and discussed issues such as evangelization, family, youth and young adult ministry, parish life, diversity and spirituality.

"How can we be safe and secure?" is the question raised by immigrant families in the parish, many of whom work construction and landscaping jobs in the more affluent Detroit suburbs.

Much of VanAssche's ministry consists of pleading with immigration officials on behalf of parishioners threatened with deportation.

"The number of people being detained is through the roof," said the priest, ordained just two years ago, who studied Mexican culture and Spanish language via an immersion program in Cuernavaca, Mexico.

One parishioner took a lunch break at a local convenience store and was whisked away by immigration authorities, for example. VanAssche spends time in court and in writing letters supporting migrants.

The biggest fear comes via driving. Undocumented people are generally not licensed to drive in Michigan. A simple traffic stop can have life-shattering consequences. In a region literally built on the automobile, where there is little public transportation, getting to work or church often requires a car.

The consequences were felt at the Dec. 9 parish encuentro conference, said VanAssche. Turnout was lessened, he said, as many were unable to risk driving a car to the seminary. He said that the world of migrants in the region, whether they are in Detroit or in smaller industrial towns like Pontiac, becomes small and constricted, as undocumented people are reluctant to venture far out of their own neighborhoods.

These concerns were voiced throughout the parish encuentro process, which brought together Latino parishioners. One result of the process at St. Damien's was the parish sponsorship of a legal clinic on immigration issues.

Fear has an impact on parish life, said Guadalupe Guzman, office coordinator at the parish, and it reveals itself in mundane ways. For example, it's not unusual for a mother to say her child could not get to religious education classes because of the enhanced fear of driving, sometimes aggravated by locally-generated alerts about the presence of ICE or aggressive local police tactics.

Guzman, who came to Michigan 20 years ago from Monterey, Mexico, noted that she will go to Mass at both English-speaking and Hispanic churches, with her children now conversant and educated in English. But, she said, "My home is in the Hispanic community."

That community, she said, is stressed in the Detroit region, by economic and immigration concerns. Mexican migrants in Michigan may be thousands of miles from California, Texas and Arizona, but "we are still on the border," she said.

Two Detroit auxiliary bishops who minister to Latinos were active at the encuentro conference, which included Mass and day-long discussion groups addressing issues of concern to Latino Catholics in the archdiocese.

Bishop Arturo Cepeda, said encuentro "allows us to listen to one another" and emphasized that the first encuentro process in the 1970s resulted in an increase in the number of Latino bishops and the growth of Latino ministries throughout the country. He expressed interest in family life and parish issues. Among recommendations discussed at the conference were that parishes focus on evangelization, welcoming people without a spirit of judgement; that more bilingual staff be employed in parishes; that parishes be led by pastors with an understanding of Spanish language and Latino culture, and that homilies be more engaging.

Another issue to consider, said Cepeda, are the needs of second and third-generation Latinos, many of whom are educated in English and now comprise the majority of young Catholics in the country. He said that 60 percent of Catholics in the U.S. under the age of 18 are Latino. Of that number, 93 percent were born in the U.S. They are here to stay and are becoming immersed in the wider English-speaking culture while retaining their own cultural and familial ties.

Bishop Donald Hanchon has been ministering to Latino Catholics in the archdiocese since 1987, after training in Mexico and San Antonio, Texas.

Hanchon told NCR that Detroit-area Latino numbers keep rising. While mostly from Mexico, they now include Central Americans and Puerto Ricans and number more than 200,000, up from around 50,000 when he first entered the field of Latino ministry. The number of parishes offering Mass in Spanish has also risen. Noted Hanchon: "If you do Mass, you have to offer other things," noting the growth of religious education and other programs for Latino Catholics.

ICE is a regular presence around Detroit, their vehicles easily identifiable. One cluster of vehicles was parked outside Mass in his parish for a few weeks, frightening parishioners. Hanchon asked what they were doing there.

"Nothing," was the response. Hanchon suggested they do nothing somewhere else. After that, the vehicles were no longer parked outside the church.

A large pastoral concern involves regularizing marriages. Couples often come from Mexico, establish lives and raise children while planning eventually to formally tie the knot in their home villages. But immigration concerns keep them in Michigan. Local parishes have responded by holding group wedding services, for up to eight couples at a time.

Latino growth has revitalized area parishes, particularly those in Detroit city neighborhoods, said Hanchon. The archdiocese has gone through decades of parish closings, but there are signs of revival. At Holy Redeemer Church in Detroit, attendance is now up to 4,000 people for Spanish Mass. In some parishes, Spanish Mass attracts overflow crowds, while English Mass attracts only a few dozen people.

That growth is expected to continue, despite economic and immigration concerns faced by Michigan's Hispanic immigrants. Both bishops emphasized the need to communicate better with the wider community the church's concerns for immigrants in an electorally-strategic state that very narrowly voted in November 2016 for Donald Trump, who ran on a platform promoting a border wall and restrictive immigration policies.

Hanchon suggested that parishes consciously bring together both Anglo and Hispanic parishioners at church socials and other events to break down divisions and promote understanding. Even in his own family, he said, there is suspicion of immigrants that only can be diminished with more exposure to Hispanic families.

"We can't continue to live as a community apart," said Hanchon. "What convinces people is getting to know stories." It's a growing necessity for the church if it hopes to reach both communities in this northern border town.