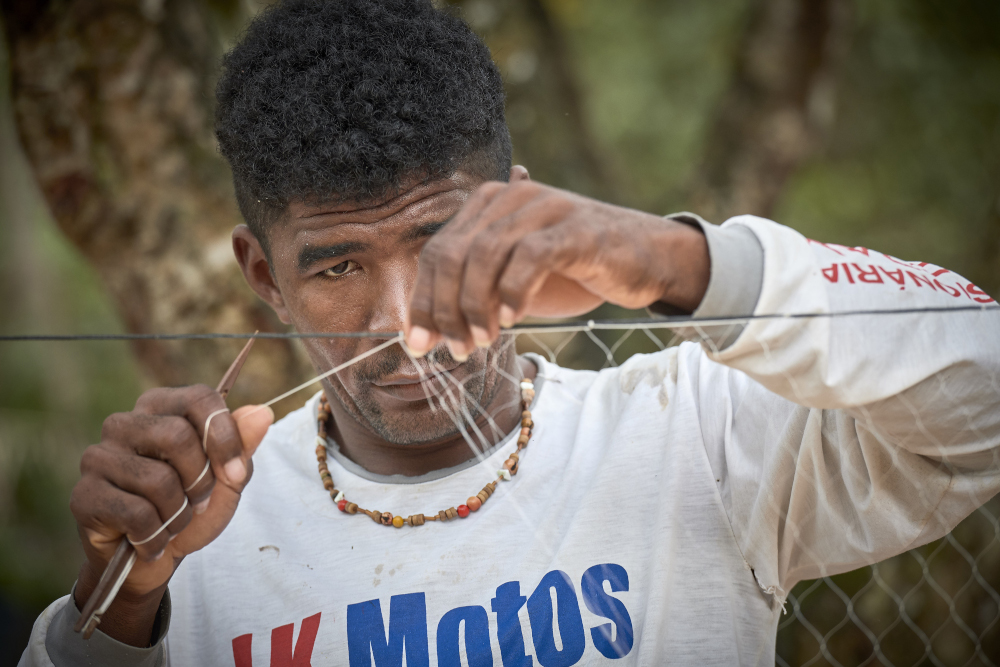 Valdir Guimaraes repairs a fishing net in Quilombo Bom Jardim near Santarem, Brazil. Soy plantations are encroaching on the community, and its way of life could be drastically changed if a large river port planned for the area is built. (CNS/Paul Jeffrey)

Marluce Coelho has mixed feelings about the college scholarship that has made her one of about 300 students of Afro-Brazilian descent studying at the Federal University of Western Para.

"It is hard to realize that I am only able to study because my grandfather was a slave," said Coelho, her eyes filling with tears.

Coelho, 24, is one of about 300 students at the university who are from quilombos, communities founded by slaves who escaped from forced labor or who were freed after Brazil officially abolished slavery in 1888.

But although slavery as an institution no longer exists, forms of forced labor persist in the country. And "quilombolos," as the residents of quilombos are known, still suffer from the racism and discrimination that made the brutal slave trade possible in the first place.

Even at the university, the students encounter prejudice from people who belittle them because of their dark skin or doubt their ancestry because their skin is lighter.

"People ask why we are so black, or why we are so white," said Jose Henrique de Jesus Pinto, one of the leaders of the quilombolos organization at the university.

The students hail from quilombos along the Tapajos River, which flows into the Amazon at Santarem, and its network of tributaries. Besides the quilombos, it is home to at least 10 indigenous groups, some of which live several weeks by river from Santarem.

Although much of the region is heavily forested, the Trans-Amazonian Highway, built in the 1970s, opened the area to ranchers, farmers, loggers and gold miners. It also led to construction of dams on the Tapajos River and its main tributaries, partly to generate electricity, and partly to tame rapids on the rivers so farmers can ship grain to the port at Santarem.

Those changes have disrupted traditional life in the quilombos along the lower part of the Tapajos River, where people mainly fish or farm small plots of land. Their communities are now under siege from soy plantations that encroach on their lands, as well as from dams that disrupt their traditional fishing practices and mines that pollute the water.

Residents of Bom Jardim, a quilombo about an hour by road from Santarem, have watched soy farms expand to the borders of their community. They say the chemicals sprayed on the crops poison their water, make them ill and harm their own crops.

In another quilombo, when crops on the large neighboring farms are sprayed, as often as once a week between December and August, the breeze carries the chemicals, giving children headaches and sometimes killing chickens in homes near the fields, said one community leader.

Now quilombolos along the river worry about a new threat, a proposed port facility that would occupy their traditional fishing grounds and cut off their river route to the city, where they sell or purchase goods in markets.

"It will mean a lot of pollution, which will affect the community's traditional food supply, which is fish," said Narivaldo dos Santos, a community leader in Bom Jardim. "If the water is polluted, the fish we eat will be contaminated. That's a big concern of the communities around here."

The risk is even greater because like the many quilombos, Bom Jardim does not have a communal land title that would protect the residents against outsiders who might try to take their property. That is partly because the community has a complicated past. Once the estate of a man named Francisco, the story goes, the property passed to his widow, who promised to leave it to the couple's slaves when she died.

After her death, the workers formed a free community and remained on the land. Over the years, however, outsiders appeared, alleging claims to parts of the property. One, who raised cattle for a time, began to rent out a swath of land, first to ranchers, then to soy farmers. 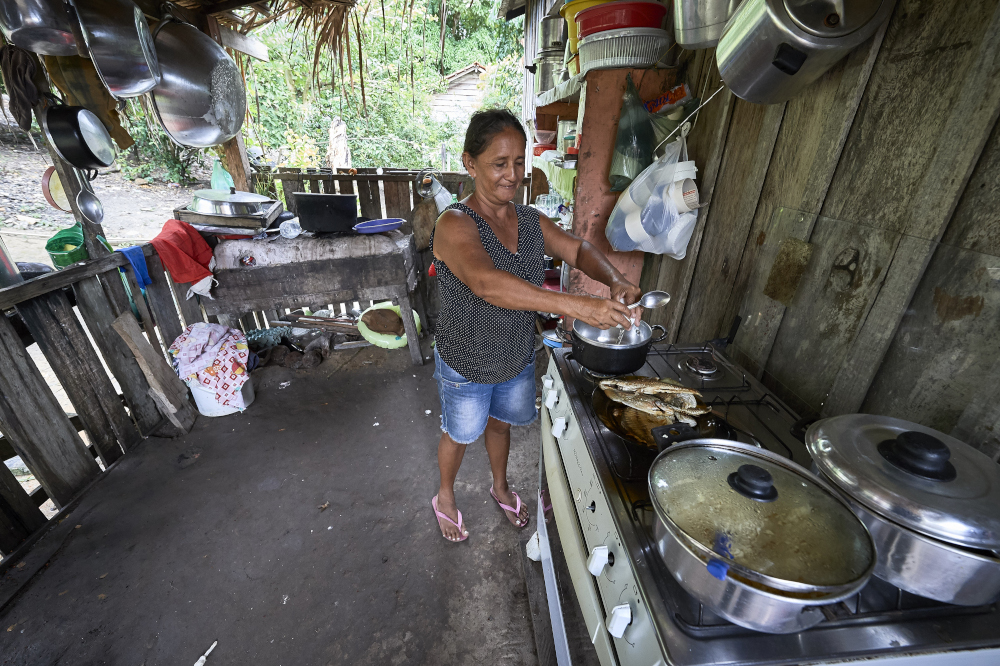 A woman prepares fish to eat in Quilombo Tiningu, near Santarem, Brazil. Quilombos are Brazilian hinterland settlements founded by people of African origin, mostly slaves. Fish is a main staple of the community, located near the Amazon River. (CNS/Paul Jeffrey)

Bom Jardim's residents generally make a living by fishing, farming small plots and foraging in the forest beyond the cluster of houses. Brazil nuts, which fall from giant trees early in the year, are prized for eating and for sale, but soy farmers fell and burn the trees to clear land, even though it is illegal, said Dileudo Guimaraes, a community leader.

The biggest worry, though, is the planned port facility.

The environmental impact study for the port project concluded that there would be no effect on traditional communities, but dos Santos and other community leaders disagree. The quilombos and indigenous communities near the proposed port site should be consulted before the plan can go ahead, he said.

Some local politicians are trying to avoid a consultation by claiming that the quilombos are not traditional communities, he said. Bom Jardim, like other quilombos, is fighting to obtain title to its land to give it a stronger position.

The quilombos have formed a federation to fight for territorial rights.

It is a constant battle, said Raimundo Benedito da Silva Mota, 59, president of the association of residents of Tiningu, a community of some 90 families. A community leader was murdered in 2018 and Mota has received death threats. He worries about his family's safety.

The Tiningu quilombo is caught between the soy and corn plantations that are invading the neighboring indigenous community of Acaizal and the planned port, which will obliterate the local fishing grounds.

Young people from Tiningu are among those now studying at the university in Santarem.

"You have to understand where you came from and that there is a movement behind you," said Evilane dos Santos Clemente, 22, of the Quilombo Boa Vista.

Her community is affected by runoff from mining, she said. Others have seen fishing grounds wiped out by dam construction, and several are studying the possible impacts of construction of the port.

Like Coelho, the students are aware that they owe that opportunity to people who came before, who fought for the right to an education but who may not have been able to enjoy it themselves.

Although she now lives in the city, Coelho said, "I don't stop being a quilombolo. I have to carry the standard."