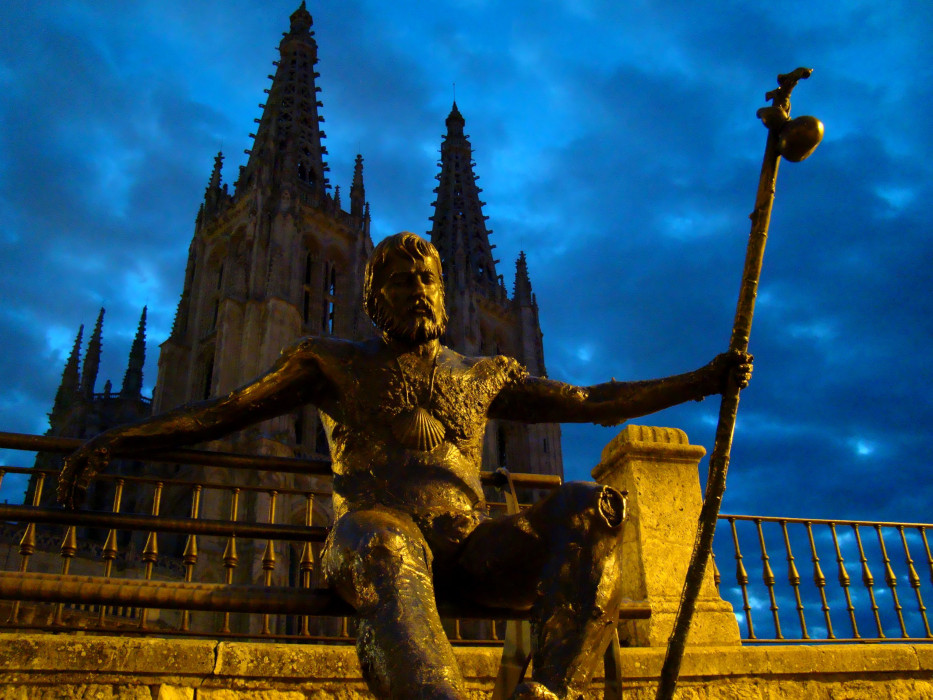 A sculpture showing a resting pilgrim on the side of the cathedral in Burgos, Spain. The famous Camino de Santiago passes through Burgos. (AP/RNS/Bjørn Christian Tørrissen/Creative Commons)

Susan Stoltze's Camino didn't turn out the way she had imagined it.

After days of dealing with cranky innkeepers known as hospitaleros, intermittent thunderstorms, wrong turns and high anxiety, Stoltze cut short her 2014 walk on the Camino Frances, the most popular route of Spain's ancient Christian pilgrimage, the Camino de Santiago. She had more than 450 miles left to go in the 500-mile journey that starts in St. Jean Pied-de-Port in France, climbs up and over the Pyrenees and ends at the Catedral de Santiago, believed to be the resting place of St. James.

But Stoltze, a Wiccan who is one of many non-Christians and people of no faith to walk the Camino, was determined to finish the pilgrimage.

So she quickly connected with her local chapter of American Pilgrims on the Camino after returning home to the Chicago suburbs.

Earlier this month, she posted in the Facebook group for members of the Chicago-area Chapter of American Pilgrims on the Camino that she'd once again made it 17.2 miles into the Camino Frances, even as hostels along the way have closed due to coronavirus restrictions and Illinois has extended its stay-at-home order through the end of May.

That's because Stoltze is making a virtual pilgrimage along the Camino de Santiago, walking a 5-kilometer loop in her neighborhood and logging the distances on a website called Walking 4 Fun, which provides maps, photos and videos of what the journey would look like along the Camino Frances.

A few pilgrims have joined her, walking near their homes or on treadmills. Others have cheered them on as they've posted updates to the Facebook group.

"What it allows me to do is to get my steps in and just think, OK, my Camino's a little different than I expected, but then I can go ahead and post online. I can share the pictures," Stoltze said.

Stoltze isn't the only pilgrim whose journey looks different at a time when the coronavirus pandemic has made travel impossible.

From hashtagged travel photos posted on Instagram to immersive apps, a number of digital pilgrimages are making spiritual journeys possible for the faithful and the curious alike, even as they stay home.

Mark MacWilliams, chair of the religious studies department at St. Lawrence University in Canton, New York, has studied virtual pilgrimages since internet technology began accommodating them about 20 years ago.

MacWilliams points to virtual reality apps that allow users to wander around and learn about Islam's holiest sites, such as the Great Mosque in Mecca, where Muslims make their hajj. Other virtual tours of sacred sites allow pilgrims to explore the Sistine Chapel in Rome or venerate the image of the Merciful Jesus, or Divine Mercy, in Vilnius, Lithuania.

For years, he said, the Lady of Lourdes Hospitality North American Volunteers have offered the Lourdes Virtual Pilgrimage Experience, in which volunteers bring a rock from the grotto and water from the spring at the French site known for its miraculous healings to Catholic parishes across North America. The pilgrimage offers the first plenary indulgence granted by the Catholic Church for a virtual experience, according to its website.

Other apps, such as ones MacWilliams has seen for the Shikoku Pilgrimage — which links 88 Buddhist temples on the Japanese island of Shikoku — offer basic directions and information like an old-fashioned guidebook, a pilgrimage tradition, he said.

These digital pilgrimages aren't just educational, according to the scholar. They also offer the possibility for pilgrims to experience something sacred or spiritually meaningful.

"And I don't think it's all that revolutionary a thing," he said.

Technology always has found ways to invite the faithful on pilgrimage, MacWilliams said.

Before the internet, pilgrims brought readers along on their journeys through written accounts, like the fourth-century nun Egeria's description of the Holy Land or Margery Kempe's 15-century memoir, which included her pilgrimages to the Holy Land, to Rome and on the Camino.

The Stations of the Cross, depictions of 14 scenes of Jesus' crucifixion that are found in many Catholic churches, started as a way for people to walk the Via Dolorosa in Jerusalem at a time when travel was too dangerous during the Crusades, the scholar noted. 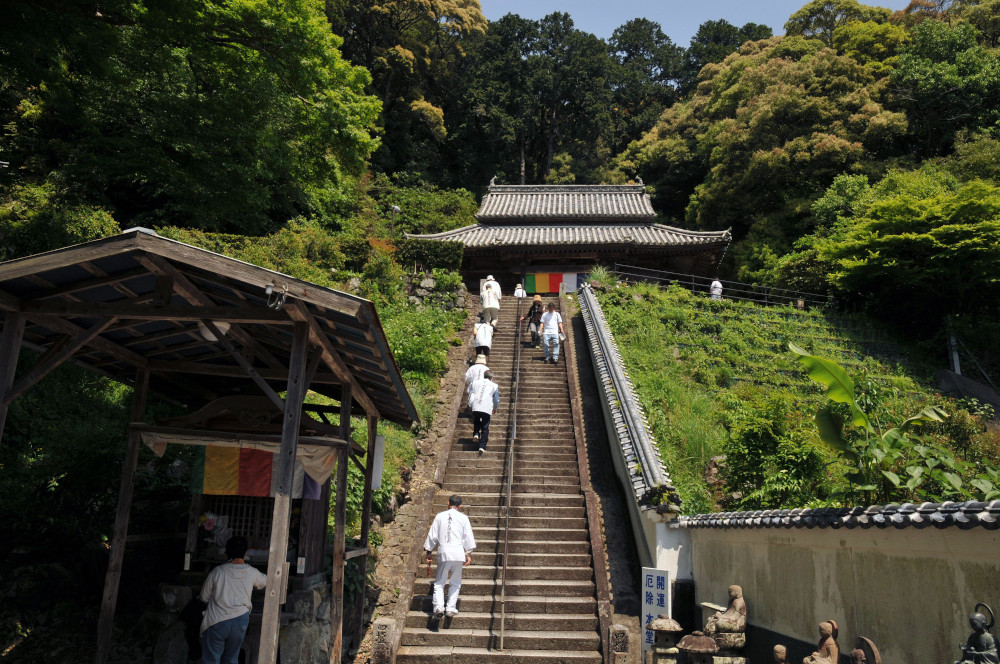 Pilgrims climb stairs to the Byōdō-ji temple on the Shikoku Pilgrimage in Japan. (AP/RNS/Creative Commons)

"There are a fair number of people that go on these virtual pilgrimages and they experience them as spiritually meaningful and real to them," MacWilliams said.

For many Catholics in particular, he said, digital pilgrimages continue that tradition.

The Rev. James Martin, a Jesuit priest and editor at large of America magazine, led his first pilgrimage to the Holy Land in 2015, after writing the book " Jesus: A Pilgrimage."

But, Martin said, "We realize that most Catholics couldn't go because of reasons of time, money, health and fear."

So America Media created a virtual pilgrimage to go along with it.

He has continued to lead the pilgrimages every year, both physically and virtually, posting daily videos on America's YouTube channel with the priest's reflections and scenery from sites such as the Sea of Galilee and the Church of the Holy Sepulchre in Jerusalem and praying for petitions that virtual pilgrims submit online.

"I really want to make it real to them and want to show them things that I know that people long to see," he said.

For Christians, Martin said, the experience of visiting the Holy Land is "indescribable."

"Knowing that you are looking at what Jesus certainly looked at just grounds the Gospels in a way that is hard to explain," he said.

The Holy Land isn't considered holy by Christians alone. Many faith groups are offering similar virtual pilgrimages in Israel through the pandemic, according to Jill Daly, director of the Midwest region for the Israel Ministry of Tourism.

The Visit Israel Facebook page has been encouraging people staying home to share photos of their past travels to the country using the hashtag #InspiredByIsrael.

For Muslims, for whom pilgrimage is a sacred duty, digital pilgrimages can be more controversial.

The Muslim 3D app  will allows users to make a virtual hajj — the pilgrimage to Mecca all Muslims who are physically and financially able are expected to make at least once — on mobile, desktop or virtual reality headsets.

But, Muslim 3D managing director Bilal Chbib said, "I don't think it will ever be a substitute for the real thing."

Instead, he said, the app will mak eit possible "either to just visit these places which are important for you virtually or to prepare yourself for this important journey if you ever go there."

A prototype of Muslim 3D has been downloaded more than 700,000 times, according to its LaunchGood page, and the app creator said he's heard from many users who want developers to add a way for them to perform acts of worship.

Chbib hopes a first version of Muslim 3D will be released in time for hajj season in July, as Saudi Arabia has cautioned Muslims to delay making plans for the pilgrimage amid the uncertainty of the coronavirus.

For Stoltze, co-coordinator of the Chicago-area chapter of American Pilgrims on the Camino, her digital pilgrimage has captured what she's come to understand about the Camino de Santiago since she first set out to walk it.

"Your Camino is your own. You don't have to go to Northern Spain to walk your own Camino. Every step you take through life is a Camino," she said.

"And if you can't afford to go to Northern Spain, walk around your block. Take that sacred space with you."