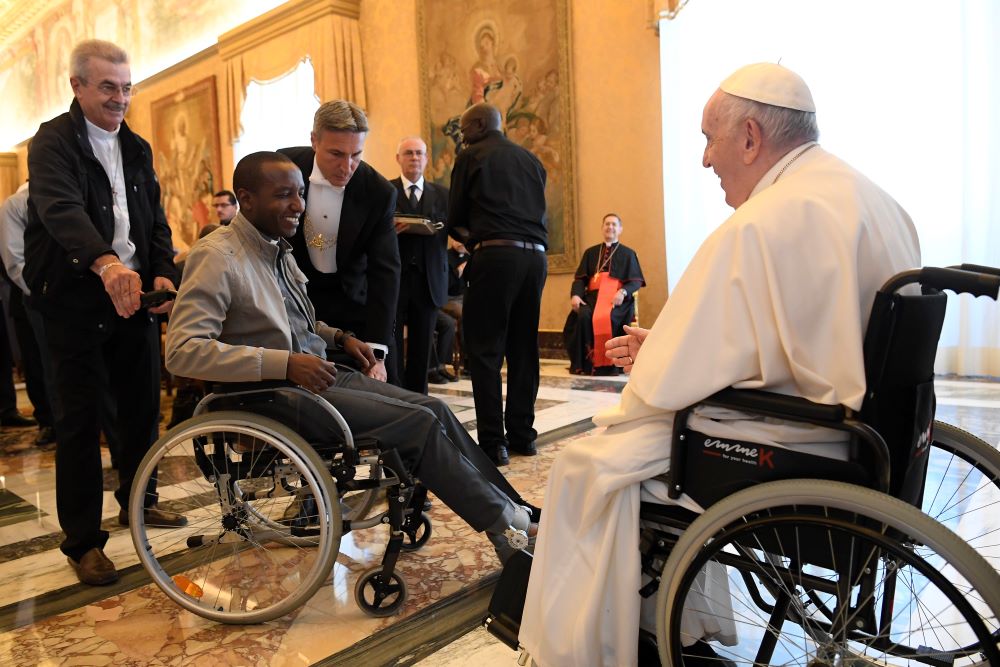 Pope Francis greets a cleric in a wheelchair during an audience with participants attending the general chapter of the Comboni Missionaries at the Vatican June 18, 2022. (CNS/Vatican Media)

When Amanda Martínez Beck saw a photo of Pope Francis sitting in a wheelchair and holding a baby during his weeklong trip to Canada in July, she felt the same sense of camaraderie she feels seeing another mom at her children's elementary school using a wheelchair.

Beck, who uses a rollator, a kind of walker with a seat, teaches that "all bodies are good bodies" in her fat liberation activism. "Something is good that fulfills its purpose, and I believe that the purpose of the human body is relationship with God and others," she told NCR.

For Beck, "to see Pope Francis, having relationships, doing his papal duties" using a wheelchair or a cane, "it just reminds me of the goodness of a weak body like mine, because this is one of the holiest people in the world able to love and serve from a wheelchair."

Beck, who lives in Texas, is one of many disabled Catholics who praised the pope's decision to publicly use a wheelchair, which he has done since at least May 5 due to severe knee pain, making disability part of his visible identity.

Other world leaders have gone to significant lengths to avoid being seen in a wheelchair, and there have been rumors that Queen Elizabeth II has been among them.

"There is this belief that physical weakness yields moral or leaderly weakness," said Beck. "A lot of people, I have learned, view mobility aids as giving in or being lazy." 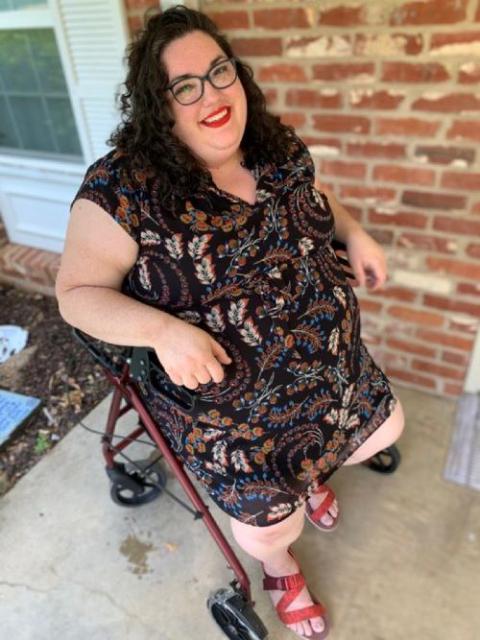 Amanda Martínez Beck uses a rollator, a kind of walker with a seat. "To see Pope Francis, having relationships, doing his papal duties" using a wheelchair or a cane, "it just reminds me of the goodness of a weak body like mine." (Courtesy of Amanda Martínez Beck)

"There's just so much shame that keeps us in pain," she said, encouraging Francis to speak about his experience using mobility aids.

Erin Murphy, a lifelong wheelchair user in Cambridge, Massachusetts, said the pope's use of a wheelchair "definitely normalizes disability, which I think is great."

Because the lectern and the raised sanctuary area in Catholic churches are frequently inaccessible, Murphy has not been able to serve as a lector or a eucharistic minister. Even participating in Mass in many churches, which often do not have cutouts in the pews for wheelchair users, makes her feel isolated because she has to sit at the edge of the church.

"I'm very obviously not sitting with the body of Christ, and that is really bothersome to me," she said.

Other disabled Catholics said they found it troubling that there appeared to be an increase in rumors that Francis was considering resigning the papacy as his knee pain grew worse and he began to use a cane or a wheelchair in public. 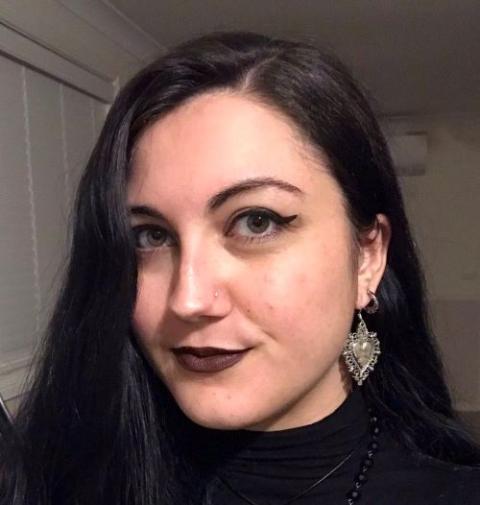 Amy Smith, who is autistic and has acquired single-sided deafness, said that increased rumors that Pope Francis will soon retire since he started using a wheelchair in public "does a disservice to people who acquire disability." (Courtesy of Amy Smith)

Amy Smith, who is autistic and has acquired single-sided deafness, said she has been disappointed in the rumors.

The speculation "does a disservice to people who acquire disability," said Smith, who lives in Parramatta, Australia. "It can perpetuate this idea that if you have any kind of medical condition or disability, and you have to adapt to those circumstances, that you're basically going to become a shut-in, and that's all you're guaranteed to be. You're going to be at death's door at any point. You're going to have to give up everything that you're passionate about."

Disability is not new for Francis, who had a small part of one lung removed as a young man and who has struggled with pain from sciatica for decades. In his public teaching, the pope has repeatedly preached about the dignity of aging, even dedicating a catechesis series to the "meaning and value of old age" this year.

He also has spoken about the church's responsibility to fight ableism and disability discrimination. In his 2020 encyclical Fratelli Tutti, Francis quoted from his 2019 address on the International Day of Persons with Disabilities: "Our concern should be not only to care for them but to ensure their 'active participation in the civil and ecclesial community.' " 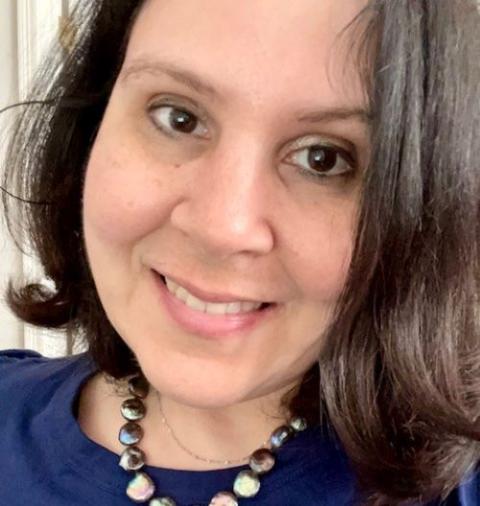 Erin Murphy, a lifelong wheelchair user in Cambridge, Massachusetts, said the pope's use of a wheelchair "definitely normalizes disability, which I think is great." (Courtesy of Erin Murphy)

"We need to have 'the courage to give a voice to those who are discriminated against due to their disability, because sadly, in some countries even today, people find it hard to acknowledge them as persons of equal dignity,'" the pope continued. Francis has regularly given addresses to commemorate the International Day of Persons with Disabilities, celebrated each Dec. 3.

Disabled Catholics have noted Francis' commitment to disability inclusion in his interactions with disabled people, especially children. On several occasions, Smith said, she has observed Francis allowing nonverbal autistic children to run around him and other officials as he is speaking, for example, during his Wednesday general audiences.

"Those children will remember those moments, and they'll be very positive memories," she said.

The pope's public use of mobility aids has tapped into disabled Catholics' dreams of greater inclusion. "I hope that having the pope show that one can have a disability and lead the church will lead to a greater respect for persons with disabilities in the church," Murphy said.

'When you don't see disabled bodies, it's hard to imagine being a leader or having a role in the church.'
—Erin Murphy

"I hope that the church can become more attuned to things like the language they use to proclaim the gospel," she added. "So for example, can 'lame' or 'crippled' be swapped out for 'unable to walk'? If churches are using offensive euphemisms, like 'special needs' or 'differently abled,' can they just use the term 'disabled'?"

"'Special needs' implies that they're extra needs when in fact getting into the church is a basic need," Murphy explained. "The word 'special' can also imply it's optional."

In this moment of attention to the pope's disability, "I would strongly encourage people within the church to seek out disability liberation theology," Smith said, recommending Jesuit Fr. Justin Glyn's 'Us' not 'Them': Disability and Catholic Theology and Social Teaching and Nancy L. Eiesland's The Disabled God: Toward a Liberatory Theology of Disability.

"Clearly the Scriptures have lots of stories, both in the Old and New Testament, of persons with disability," said Mary Jo Iozzio, a professor of moral theology at Boston College who studies disability theology. "It's really quite remarkable how the discipline has grown and gone into so many different directions," she added.

Disabled Catholics also hope that the pope's public disability challenges the infantilization of disabled people. "As a parishioner, I've had an individual routinely pat my head after Mass, as if I were a child," said Murphy, who is 42.

"I think this is an opportunity for the church to improve its understanding and relationship with its disabled members," said Smith. "This is a way to shift the thinking [about disability] from a paternalistic charity-based model of thinking … into one that is based more upon solidarity."

A version of this story appeared in the Sept 2-15, 2022 print issue under the headline: Disabled Catholics praise pope's example in using a wheelchair.