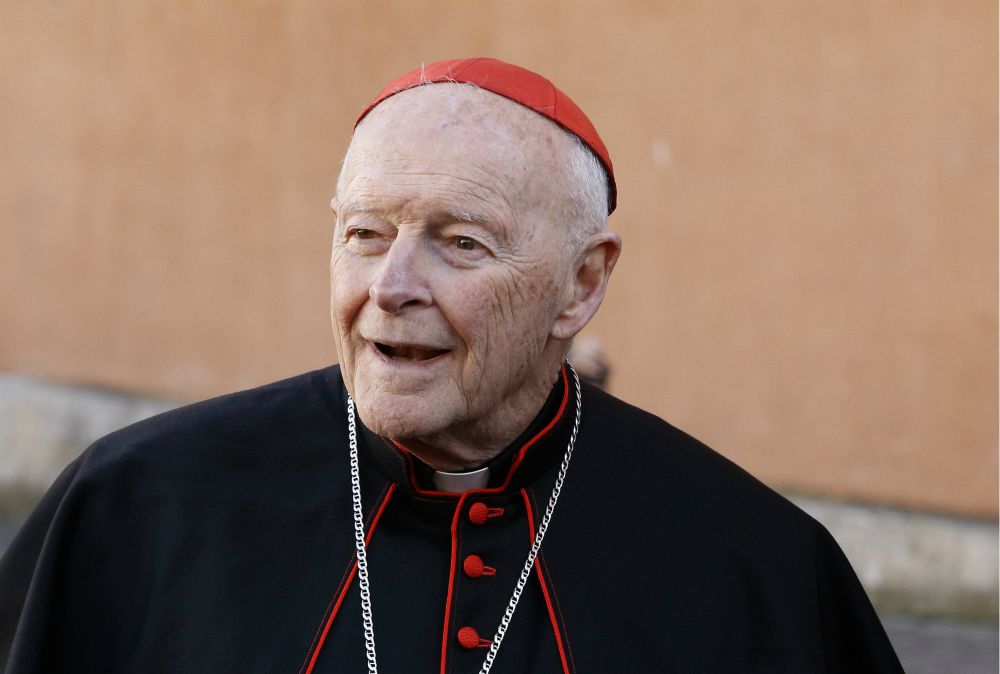 Cardinal Theodore McCarrick, retired archbishop of Washington, is pictured during a reception for new cardinals at the Vatican Feb. 22, 2014. (CNS/Paul Haring)

The news broke last week that Cardinal Theodore McCarrick, the retired archbishop of Washington, had been ordered to abstain from any public ministry because of a credible and substantiated allegation of sexual abuse against a minor. We also learned that two settlements had been made in New Jersey involving adults who alleged sexual impropriety against the cardinal when he served as a bishop and archbishop in that state. Cardinal Joseph Tobin, who is now the archbishop of Newark, also announced that he was lifting the confidentiality requirement those settlements contained, and he said the victims could come forward if they wished to do so. I stand by what I wrote at the time the news broke.

Then, some in the media decided that this information warranted opening a floodgate of rumors and speculations, not only about McCarrick but also about reporters covering the Catholic Church. Phil Lawler, at CatholicCulture.org, wrote "How did Cardinal McCarrick's secret last so long?" He concludes that short essay by suggesting the press was either lazy or biased. "Why were so many journalists willing to let the rumors go unexplored? Or, if they did explore the rumors, why were they willing to drop the story, at a time when so many other allegations were splashed across the headlines?" Lawler asked. "Could it be because, for anyone seeking to influence a cardinal, the threat of disclosure is more effective than disclosure itself?"

Rod Dreher was one of the journalists who tried to nail down the stories about McCarrick's sexual deviancy in the beginning part of the century and he used the new revelation to print now rumors about McCarrick's behavior that he did not print previously. He dismissed McCarrick's claim of innocence, writing at The American Conservative, "Innocence? I believe McCarrick is lying, and that he knows he is lying. I have been waiting for this story to break since 2002." The power of denial in sexual matters is much stronger than Dreher thinks, and McCarrick could well think he is telling the truth if he has repressed this incident.

In The New York Times, Ross Douthat saw the emergence of the McCarrick story as part of the #MeToo movement, although I suspect the more proximate reason the story came out now is that the New York Archdiocese set up its Independent Reconciliation and Compensation Program in 2016. But then Douthat made a comment that needs clarification. "For reporters who pursued the story, it was a case where 'everyone knew' but nobody would go on the record — so stories were pursued and then evaporated."

I propose two questions: Who is "everyone" and what do we mean by "know"?

To be clear, many of the rumors that have been floating around may be proven to be true. Others maybe not. We will see. As well, sexually molesting anyone is bad and warrants punishment, and I believe that molesting a subordinate adult, such as a seminarian, is almost as bad as molesting a teenaged minor, although it has not received the attention that sexual abuse of minors has achieved and is not considered a canonical crime. Abuses of power make the underlying sexual abuse even more repugnant.

But none of us in the press should simply throw out the necessity of drawing distinctions. We still need sources, not rumors, and not hearsay. And we need credible sources, not biased ones. Reporters should always consider the source of an allegation. In 2001, shortly after McCarrick arrived in Washington, a secular reporter contacted me. She had received a fax making allegations of lewd behavior by the cardinal, including the stories about the seminarians at the beach house, and how they were always one bed short and the last person to claim a bed ended up sleeping with McCarrick. The allegations did not come from a seminarian who had been at the beach house. They came from another bishop who had long opposed McCarrick on issues before the conference and who would later refuse to comply with the audits mandated by the Dallas Charter in 2002. In short, the source was suspect.

The reporter had no interest in "protecting McCarrick" nor was she concerned about offending gay people, although it is shocking the degree to which Dreher and others are making sweeping suggestions about a gay cabal, in the church and in the press, protecting McCarrick. No, she dropped the story because there was only smoke and no fire, and reporters not only need to find the fire, they need to connect a particular fire with particular smoke.

That experience 17 years ago certainly colored the way I received the rumors about McCarrick in the intervening years. The news last week about the settlements also made me more disposed to believe the charges from so long ago. But, and it is a huge but, we in the media should only report the allegations as true when we have sources we have deemed sufficiently credible that we know we are not acting irresponsibly.

I asked Cathleen Kaveny, professor of both theology and law at Boston College, what she made of the "everybody knew" meme that was circulating in the press. "We know there was a finding regarding the minor that was substantiated," she said. "We know there were two settlements with adults, but we do not know with whom. If someone gives me a creepy vibe, I may want to stay clear of them, and caution friends to do the same, but in a civil court case, the burden of proof is 'a preponderance of evidence,' and in a criminal case, the evidentiary burden is 'beyond a reasonable doubt.' Those distinctions matter. The degree of certainty you have affects the consequences that should follow." Distinctions matter.

One of those distinctions is especially complicated. We know that victims of sexual abuse are reluctant to come forward for a variety of reasons. We know that many women were threatened with termination of their employment if they spoke about a boss' misconduct, and it is not hard to imagine the same could transpire between a priest predator and a subordinate seminarian. We must listen to the victims and assess their credibility. That assessment must take account of the cultural power of sexual perpetrators to avoid detection, but the need for assessment remains.

Questions remain in the McCarrick case. Once the settlements were made, why was McCarrick allowed to continue in such a public role? Were those who did not come forward earlier threatened with retribution? Did the abuse of power extend not only to sexual acts but also to an enforced cover-up of those acts, as we know it has in many cases of workplace sexual harassment? The culture of clericalism remains under indictment and will for a long time. One thoughtful reader reminded me after my column last week that the U.S. military, which like the church imparts a corporate sense of identity to its members, actually does a much better job policing its members than does the Catholic Church. No prelate should be able to use his rank to intimidate victims from reporting the harassment they have received. The continued conversion for which I called last week remains a pressing call.

But, insofar as the press is concerned, we have no business trafficking in rumors that harm people unless we have some proof, unless we have credible sources. Using the news last week to publish rumors that still are unsubstantiated felt creepy, not cathartic, to me. If the sources do come forward, print the stories, of course. No matter how sensational and no matter how likely the rumors, we should only say we "know" something when we really know it.