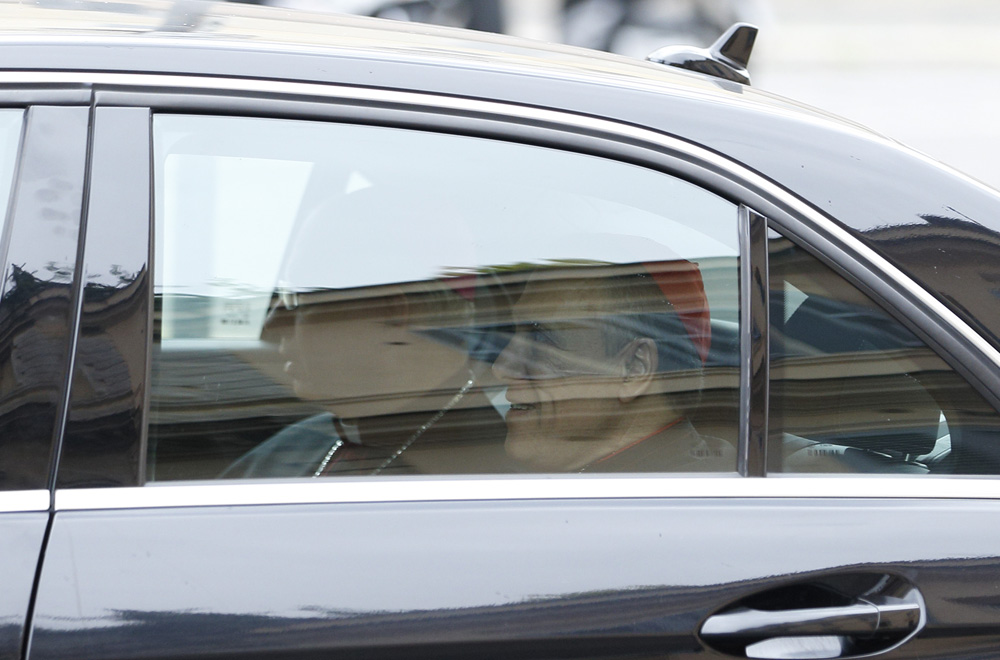 Cardinal Daniel DiNardo of Galveston-Houston, president of the U.S. Conference of Catholic Bishops, and Archbishop Jose Gomez of Los Angeles, vice president of the conference, arrive in a car for a meeting with Pope Francis at the Vatican Sept. 13. (CNS/Paul Haring)

Are the U.S. bishops up to the task of restoring trust? Early indications are mixed.

The Administrative Committee of the United States Conference of Catholic Bishops issued a statement last week pledging to use "every bit of the strength God provides us" to protect the church — from themselves. As is not infrequent in such cases of self-management, and if the steps they announced are any indication, the bishops have a long way to go before they can rest easy that their efforts to heal the church will not, in fact, make an already terrible situation even more dreadful.

No one can object to the first item on the bishops' to-do list: They are establishing "a third-party reporting system that will receive confidentially, by phone and online, complaints of sexual abuse of minors by a bishop and sexual harassment of or sexual misconduct with adults by a bishop and will direct those complaints to the appropriate ecclesiastical authority and, as required by applicable law, to civil authorities." I am not sure why they did not explain what the "appropriate ecclesiastical authority" is. Apparently, alerting a nuncio is not enough. The need for a Vatican dicastery to deal with all aspects of the clergy sex abuse mess remains obvious and urgent.

Similarly, the Administrative Committee announced it had "Instructed the USCCB Committee on Canonical Affairs and Church Governance to develop proposals for policies addressing restrictions on bishops who were removed or resigned because of allegations of sexual abuse of minors or sexual harassment of or misconduct with adults, including seminarians and priests." Well, no one has told the rest of us which bishops resigned for what reason, so it will be interesting to know how this will play out. I do not detect much in the way of transparency here, although I will bet Archbishop John Nienstedt's gig as the personal chaplain at the Napa Institute is now a thing of the past.

The Administrative Committee said they had begun "developing a Code of Conduct for bishops regarding the sexual abuse of a minor; sexual harassment of or sexual misconduct with an adult; or negligence in the exercise of his office related to such cases." The addition of the third item, negligence, is very welcome. But, what is the status of a "Code of Conduct"? Who monitors its enforcement? And, as to the sexual abuse of minors, why not simply ask the Holy See to change the canon law that currently pertains to priests and have it extend to bishops also?

Finally, the bishops' committee said it supported "a full investigation into the situation surrounding Archbishop McCarrick, including his alleged assaults on minors, priests, and seminarians, as well any responses made to those allegations. Such an investigation should rely upon lay experts in relevant fields, such as law enforcement and social services." I support that, also, but what happened to the call for an apostolic visitation? Any investigation that is not initiated by the Holy See will simply lack the ability to get to the root of the matter, which is on the other side of the Atlantic Ocean. McCarrick's rise was not impeded by charges of sexual misconduct because his patron was the pope's exceedingly powerful secretary now-Cardinal Stanislaw Dziwisz. Money spoke in the papal apartments under Pope John Paul II, and few people brought in more money than McCarrick.

What is missing from this to-do list? Oddly, given the role of the Pennsylvania grand jury report in triggering these calls for reform, the bishops do not propose an investigation into the questions the attorney general did not ask: How many of the 1,000 victims named in the report were offered counseling? How many of the allegations in the report had previously been found credible by the Independent Review Boards in the different dioceses? How many cases had been referred to Rome? How many priests were still in ministry? If the answers to these questions show that the 2002 reforms mandated by the Charter for the Protection of Children and Young People were working, that all those named in the report had been referred to Rome and pulled from ministry, and that the conclusion of the review boards showed no clerical bias, that would be an important story to tell. If not? Well then the bishops as a whole need to acknowledge they can no longer be trusted to police themselves via the annual self-reported audit.

I also wonder why the Administrative Committee did not set forth the demand that every bishop publish the names of all credibly accused priests on their diocesan website by the end of the year. This is a kind of threshold action for those who are serious about confronting the cancer, recognizing that only transparency and accountability will be curative. If you are not willing to do this simple step, how can we think you are serious about anything else? This one step allows victims to see if they were alone or not. It exposes the diocese to additional legal action — as it should — and thereby hastens both the moral reckoning and the delivery of some justice to the survivors. This one step is an obvious way for the rest of us to know if a bishop is still avoiding responsibility or facing up to his actions and those of his predecessors.

The problem may be that of the four members of the Executive Committee, two — bishops' conference President Cardinal Daniel DiNardo and Secretary Archbishop Gregory Aymond — have not yet published these lists on their website. Why not? I use the verb "demand," advisedly: Any bishop who does not list his credibly accused clergy by the end of the year should resign or be fired.

Last week, it was good to see bishops begin the acts of public penance that have too long been absent from the reckoning. I called for these services of penance back in August. It is not enough to develop procedures and policies: We need sacramental healing of the bonds that have been torn asunder by sexual crimes and their cover-up. But policies and procedures are one of the ways you change a culture and if these recommendations from the U.S. bishops' conference are any indication, the bishops still have a long way to go before they are going to sufficiently change the culture such that they can earn back the trust and confidence they have squandered.