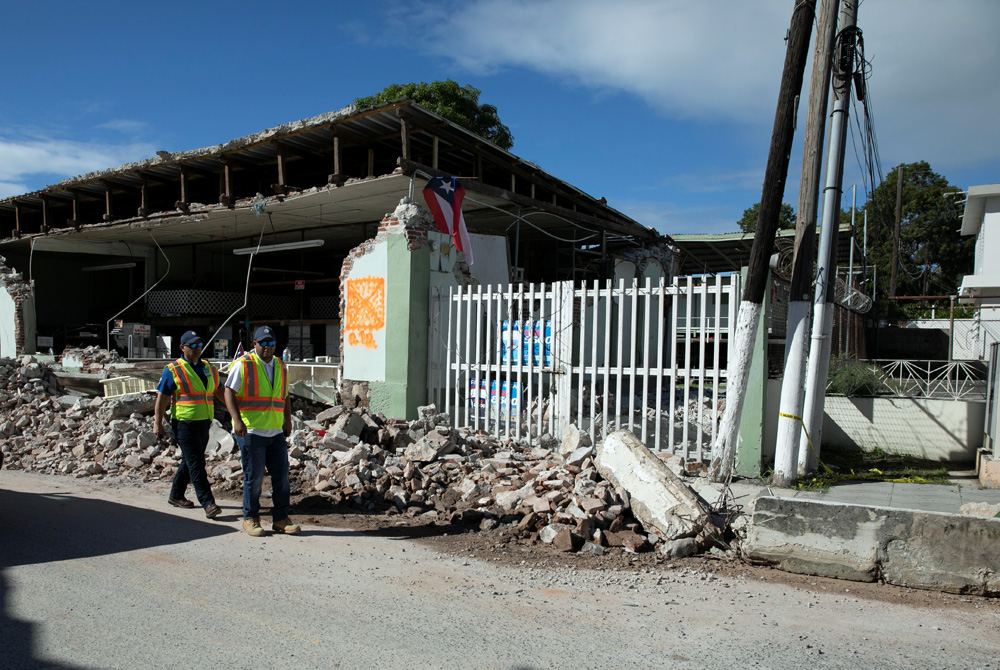 There is nothing anyone can do to stop the tectonic plates that collide underneath Puerto Rico from continuing to cause earthquakes on that already beleaguered island. But there is something the U.S. Supreme Court can do to help with the recovery effort: Revoke a lower court decision that reorganized the Catholic Church in Puerto Rico which could have the effect of unfreezing funds involved in litigation.

"The earthquake has destroyed homes, cut electricity to most of the people on the island, interrupted the normal channels of commerce and affected the well-being of our citizens," Archbishop Roberto González Nieves of San Juan told NCR. "The church needs to help people who are desperate, and we are using whatever money we can put our hands on. The archdiocese is using its limited resources to help those in need. It would help enormously if we could access the money that was enjoined by the courts."

In 2016, a pension fund for Catholic schools on the island ran out of money and the teachers sued. The pension fund was not alone. Puerto Rico was in the midst of a fiscal crisis that led the government of the island to seek a form of bankruptcy protection in 2017. Then, in 2017, the island was hit by two hurricanes, Irma and Maria, further devastating the island and its economy. The court froze assets of the archdiocese and in August 2018, the archdiocese filed for bankruptcy.

The issues involving government debt have been extraordinarily complicated and efforts to resolve the debt crisis on the island have been ongoing. Those efforts were hampered by the legal tactics of large hedge funds and by Puerto Rico's complicated legal status.

Then, the Supreme Court of Puerto Rico made the legal situation for the pension fund case yet more complicated. It ruled that the 1898 Treaty of Paris, which transferred Puerto Rico to the United States after the Spanish-American War, recognized the juridic personality of the Catholic Church on the island which then consisted solely of the San Juan Diocese, and that all the church institutions on the island were liable for the pension debt of the archdiocese. Since 1898, five additional dioceses have been erected: Ponce in 1924, Arecibo in 1960, Caguas in 1964, Mayagüez in 1976 and Fajardo-Humacao in 2008. The court held that the assets of these separate dioceses were all subject to one entity: the Catholic Church. This was a novel argument, as well as an erroneous one. Never before had it been recognized or even suggested. Obviously, it is not how the Catholic Church is actually governed: the bishops of Ponce or Mayagüez raise and dispense money for their dioceses without clearing anything through the archbishop of San Juan.

The U.S. Supreme Court is expected to decide any day whether or not it will take jurisdiction in the case involving the archdiocese and the other dioceses which are asking the court to overturn this ruling by the Puerto Rico Supreme Court regarding the organizational structure and legal status of the island's six dioceses.

An amicus brief filed by the U.S. Solicitor General sides with the archdiocese and states the legal issue in the clearest of terms:

Under the Free Exercise Clause, the government may not single out religion in general or a given religious denomination in particular for discrimination on account of religious status. The legal principles applied by the Puerto Rico Supreme Court violate that bedrock rule. The opinion contains some ambiguous and conflicting passages. At the very least, however, the decision contains strong indications that it rests on a special legal presumption applicable to the Catholic Church, but no indications that the Puerto Rico Supreme Court would apply the same presumption to any other entity under the civil law. Under that rule, all Catholic entities in Puerto Rico, no matter how separate and how autonomous in practice, presumptively qualify as components of a single legal person, and, further, are thereby responsible for each other's liabilities. The application of such a special rule violates the Free Exercise Clause.

It is not up to the government to tell the Catholic Church how to organize itself.

All that complicated legal and financial mess cannot be allowed to obscure a simple fact: The people on the island are desperate right now. The fiscal perfect storm left the island ill-prepared to cope with the recovery efforts after Hurricanes Irma and Maria struck the island in 2017. Parts of the island were without electricity for months. More people fled to the states, further shrinking the population which had been shrinking for 10 years due to the recession. And, now, the earthquakes have again disrupted power and water in large parts of the island. Hundreds of people are homeless and hungry. As they have for more than 500 years, the people turn to the Catholic Church in a time of need. The U.S. Supreme Court should not obstruct that help by ratifying a ridiculous decision by the lower courts.