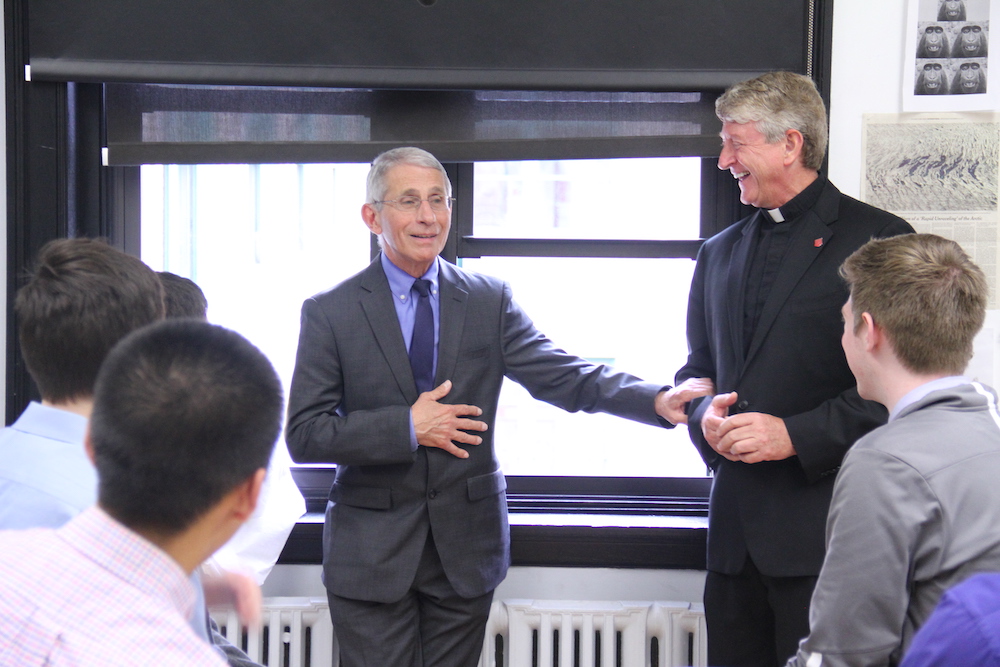 He's America's tough-love grandpa at a moment when top political leaders are frequently more like irresponsible dads prone to happy talk nonsense. Dr. Anthony Fauci, director of the National Institute of Allergy and Infectious Diseases, has emerged for many as the voice of reason and integrity as the nation confronts the novel coronavirus pandemic.

Much of that he learned at Regis High School, a no-tuition Jesuit college-prep school on New York City's Upper East Side renowned as an academic haven for gifted boys. Fauci, a member of the class of 1958, told a group of alumni in May of last year that attending the school "was the best educational period I could ever have imagined having." Fauci is also a graduate of College of the Holy Cross in Worcester, Massachusetts, another Jesuit institution, and Weill Cornell Medicine (then Cornell University Medical College).

The May talk to alumni was part of a return to Regis by Fauci, now 79 years old and known for his power walking, who, while not a household name at the time, was apparently nearing the end of a long career in government service working for six presidents.

"I take great comfort in knowing that when he speaks that he is speaking the truth and nothing but the truth," Jesuit Fr. Daniel Lahart, Regis' president*, told NCR. Lahart now supervises a school, like most across the country, confined to online classes as COVID-19 disrupts normal life.

Lahart said that the most famous Regis alumnus has exuded integrity throughout a career, which, before this latest outbreak, was best known for raising the alarm about HIV/AIDS at the highest levels of government in the 1980s.

Fauci has emerged as a no-nonsense truth teller in the latest crisis. While President Donald Trump has been prone to what have been criticized as overly optimistic daily briefings, it's been Fauci, frequently standing behind the president, who has tempered the optimism, whether it has been about the possibility of miracle cures or the hope of returning to business as usual.

In an interview with Science Magazine this week, Fauci acknowledged that Trump's stretching of the truth during national press conferences creates an issue. But his response has been limited. "I can't jump in front of the microphone and put him down," Fauci told Science, a quote widely seen as an illustration of the tension between science and political blather.

"He's got a relatively good poker face. But not all of the time," Lahart said about Fauci.

During Fauci's visit to Regis last year — he also visited a biology class at the school before talking to alumni — he waxed nostalgically about his four years at Regis. Regis students come from all over the metropolitan region, picked out as eighth graders from the brightest boys from far-flung parochial schools. They often tell tales of heroic commutes. For Fauci it consisted of a couple of bus rides as well as two express subway trains, for a 70-minute, one-way ride to school from his home in Bensonhurst, Brooklyn. He was captain of the basketball team, and if there were games and practices in Harlem or in the Bronx, the ride home could take nearly two hours. Regis students were also expected to do three hours of homework a night, a discipline he takes to public service.

On the first day of his freshman year, he recalled, the Jesuit dean of discipline, a Fr. Flanagan, changed his name from Anthony to Tony, and it stuck.

Fauci said he navigated through six presidential administrations in Washington by being decidedly apolitical and non-ideological. He offered insights into the presidents he served, beginning with Ronald Reagan.

Reagan, who he said was personally a warm and friendly person, never even addressed the AIDS crisis until his second term, unwilling to address the topic for years while the epidemic raged, failing to use the presidential bully pulpit to marshal resources against the disease.

Fauci described Reagan's successor, George H.W. Bush, as extraordinary, noting that as vice president Bush visited Fauci's AIDS patients. Bill Clinton was absorbed in the science of countering AIDS, while George W. Bush pushed Fauci to develop a program to counter AIDS in Africa, which Fauci credited with saving 14 million lives via the distribution of drugs that treated the disease. Fauci earned the Presidential Medal of Freedom from the younger Bush for his work in Africa. But Fauci said the president was ultimately responsible for the program, motivated by a concern that the U.S. and other wealthy countries should not be the only places in the world where HIV/AIDS could be effectively treated. 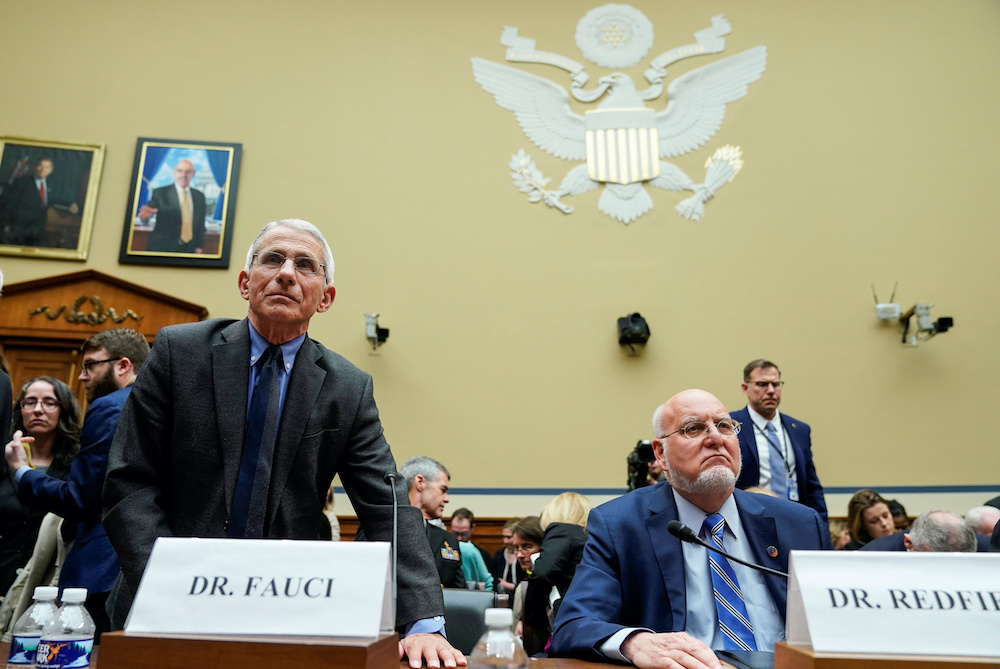 Last year, he told the Regis group that the long fight against HIV/AIDS, which included times of helplessness when he was unable to assist his dying patients, were "the darkest years of my life."

Now Fauci is the public face of another dark struggle.

At his Regis talk, Fauci was asked if there was anything that kept him up at night. He responded that his days are usually so long that he always sleeps well. But there was, he said, an issue that worried him when he was awake, namely the emergence of a virus that attacks the lungs, similar to the one that killed millions during 1918 and 1919.

"I worry about a pandemic," he said last May. Less than a year later, his worries are now a reality and he has emerged as the public face of the fight against coronavirus. He appears concerned yet unflappable.

"Right now there is something he's trying to figure out. He enjoys the challenge," said Lahart.

*Editor's note: An earlier version of this article misidentified Fr. Daniel Lahart as the school's principal.

YouTube video of May 9, 2019, conversation with Dr. Anthony Fauci at Regis High School

Read this next: Editorial: May the lesson be indelibly inscribed — we need one another
This story appears in the Coronavirus feature series. View the full series.
A version of this story appeared in the April 17-30, 2020 print issue under the headline: Dr. Anthony Fauci, dedicated to public service, formed at Jesuit high school.