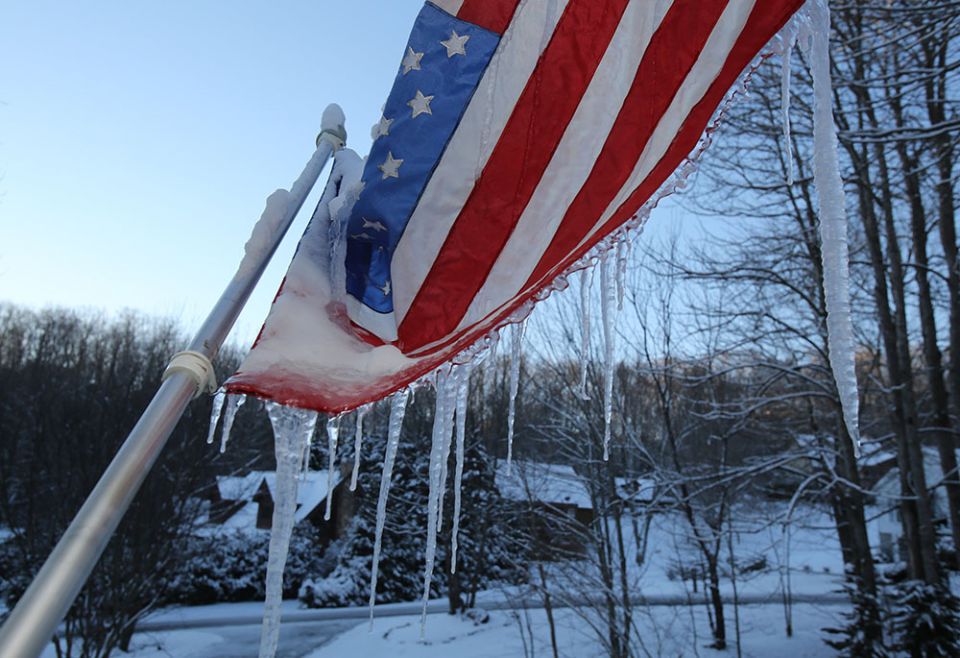 Icicles hang from a frozen U.S. flag on the front porch of a home in Waynesville, North Carolina, Dec. 26, 2020. (CNS/Bob Roller)

With the 2022 midterm elections looming 10 months away, faith leaders in the South are preparing a "revival" effort to reinvigorate voters around what they see as two crucial issues: climate change and voting rights.

The Southeast Faith Leaders Network kicked off its first-ever "climate revival" on Jan. 20. The yearlong campaign is targeted on four states — Alabama, Georgia, North Carolina and South Carolina — that organizers say are on the front lines of the impacts of climate change as well as efforts to suppress voting access.

"The changes that are needed [on climate change] are able to be addressed when everyone has a voice. And so the vote is the way to provide everyone with a voice in the conversation," she said.

The campaign has planned numerous state-based workshops in the coming months to examine both climate impacts and voting realities at the local level. It will also provide training on ways to educate, register and mobilize voters, as well as protect them. A summit on climate resiliency is scheduled for the fall.

Several organizers who spoke with EarthBeat said a main area of focus will be the U.S. Senate elections in the four states. The Cook Political Report ranks as toss-ups the open Senate seat in North Carolina and the race involving Sen. Rafael Warnock of Georgia, while the races for Alabama's open seat and Sen. Tim Scott's reelection in South Carolina rank as solidly Republican.

In addition to South Carolina Interfaith Power & Light, other groups that are part of the Southeast Faith Leaders Network include the Alabama and Georgia chapters of Interfaith Power & Light, the North Carolina Council of Churches, and Creation Justice Ministries, a D.C.-based national organization that is helping coordinate the campaign. Sojourners and the Poor People's Campaign are also partnering with the climate revival campaign.

Other faith-based environmental organizations have recently tied solutions to climate change with the cause for voting rights. The Catholic Climate Covenant threw its support behind federal voting rights legislation in the days before it was debated in the Senate.

"As an organization lifting up care for creation and climate action from the foundation of the Catholic faith, we recognize that a functioning democracy is critical to creating the solutions we seek for the common good and our common home," Covenant leaders Jose Aguto and Dan Misleh said in a joint statement on Jan. 18.

The year 2021 was the sixth hottest on record, and amassed 20 separate billion-dollar weather and climate disasters totaling $145 billion — the third highest year of costs. As those weather-related disasters played out, Republican legislators in at least 19 states, including Alabama and Georgia, passed more than 30 laws that limited vote by mail, reduced polling locations and hours, and added registration requirements. 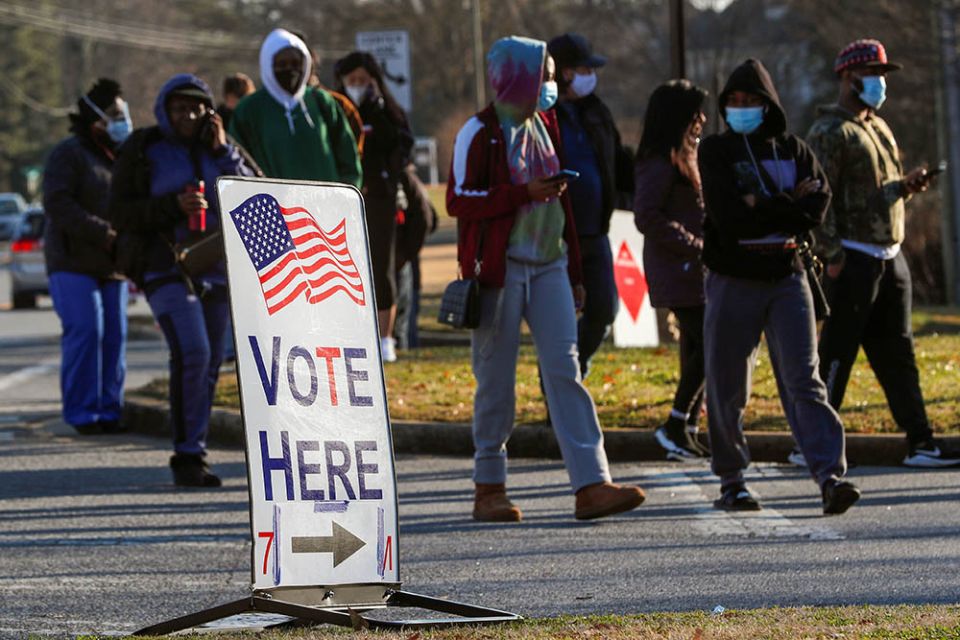 Voters in Marietta, Georgia, line up to cast their ballots in the U.S. Senate runoff election Jan. 5, 2021. (CNS/Reuters/Mike Segar)

Their experiences living through flooding and severe storms, increasingly made stronger as temperatures rise, are a main reason why communities of color express greater concern about climate change than white Americans, said the Rev. Michael Malcom, a United Church of Christ minister and founder of Alabama Interfaith Power & Light.

Building up both disaster preparedness and resilience to climate impacts is especially essential for these communities, Malcom said.

In places like Charleston, South Carolina, increased flooding in recent decades has forced the city to respond, Brewster added.

"Charleston has really kind of led the way because of the direct impact that they are seeing," she said.

Both she and Malcom acknowledged that getting more people in Alabama and South Carolina to talk about climate change and consider it when casting their vote remains a challenge. 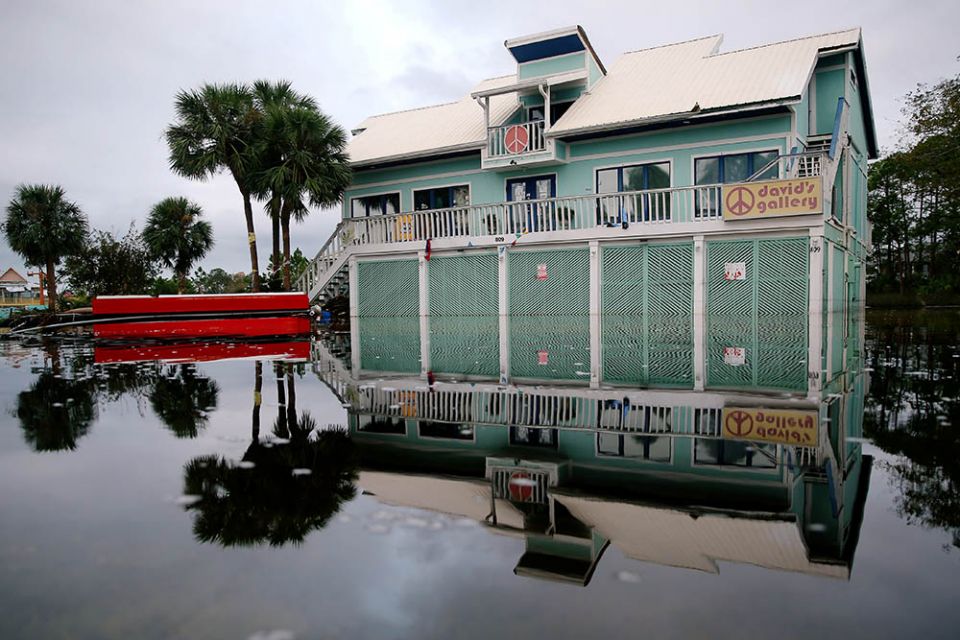 A house in Gulf Shores, Alabama, is surrounded by flood waters Sept. 17, 2020, after Hurricane Sally swept through the area. (CNS/Reuters/Jonathan Bachman)

Malcom added that the climate revival campaign was a means of "flipping the script" for faith leaders to use their "prophetic voices" to get more people talking about climate change and to more forcefully engage decision-makers to act on solutions.

The revival is aimed not just at elevating climate change alongside voting rights as a central issue for voters in the 2022 midterm elections, but also as a means to lifting up dejected spirits after several large legislative losses in recent months.

Among them the failure by Senate Democrats to overcome the filibuster to pass the Freedom to Vote Act and the John Lewis Voting Rights Advancement Act, and to come to agreement on the Build Back Better Act, which contains $555 billion in provisions related to climate change.

A webinar on Jan. 20 kicked off the climate revival campaign. It featured a panel of speakers, including the Rev. Lennox Yearwood of the Hip Hop Caucus, who's been active in climate and voting campaigns; Randy Woodley, a distinguished professor of faith and culture at Portland Seminary and a public theologian at Eloheh Indigenous Center for Earth Justice and Eloheh Farm; and Karenna Gore, founder of the Center for Earth Ethics at Union Theological Seminary in New York. 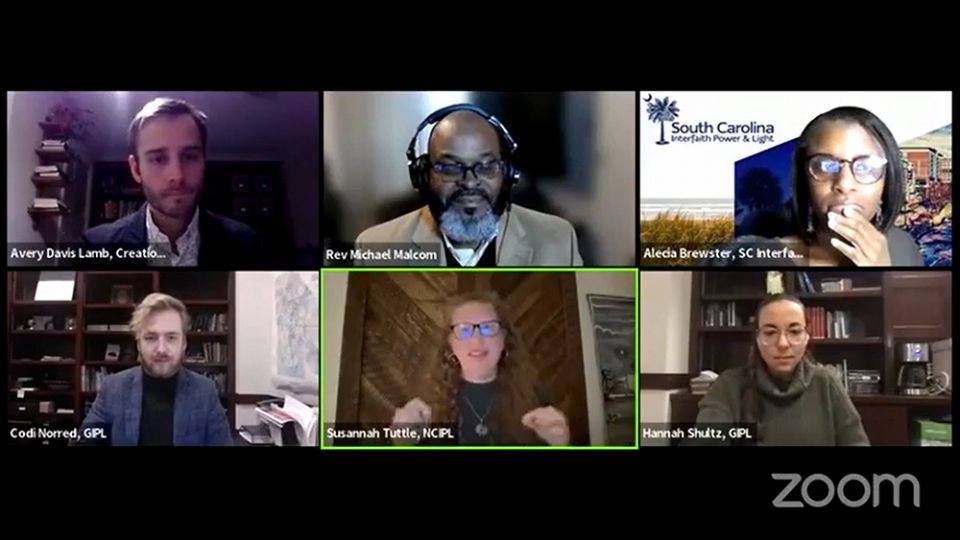 A webinar on Jan. 20 kicks off the climate revival campaign organized by the Southeast Faith Leaders Network. (EarthBeat screenshot)

"We have to recognize this [climate] crisis is not just about science, and technology and data as important as they are. It is a moral and spiritual predicament," Gore said, adding that it's not enough to just notice and decry the problem.

"The people that suffer the most from climate change are the ones that have done the least to cause it is actually a message to us. ... We must see that the solution is that those who would be made invisible and marginalized must be counted, must be heard, must be valued, and we must make it easier, not harder, for all of them to vote," she said.

Long-persistent efforts to restrict the right to vote "has become like a mutating gene that continues to show up in our present," said the Rev. Adam Taylor, president of Sojourners. Such an assault on democracy "will sabotage our efforts to care for Mother Earth and to advance climate justice."

But despite legislative setbacks and the spread of election falsehoods, revivals by nature are about good news, Taylor added.

"So let's together ignite a revival, with the renewable resource of our activism, to protect the right to vote as being sacred, so that we can protect our planet and build that beloved community where everyone can flourish and thrive."