Bishops and astronauts gather in Washington to remember Apollo 8 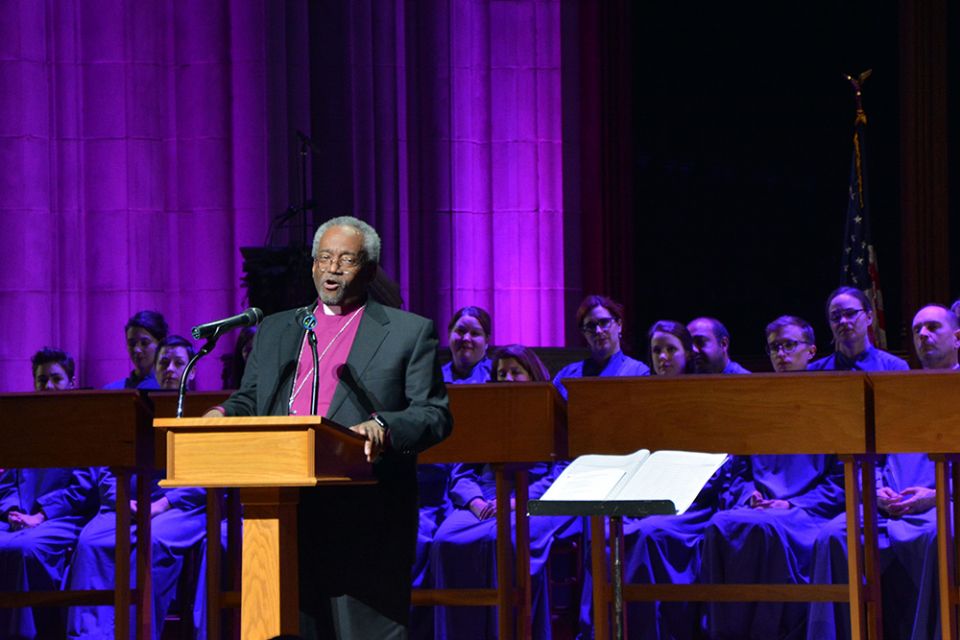 Presiding Bishop of the Episcopal Church Michael Curry addresses the gathering at the Washington National Cathedral on Dec. 11, 2018. (RNS/Jack Jenkins)

Washington — Sometimes, the most profound truths about humanity — and God — are revealed when we take a small step back. Or rocket ourselves about 238,000 miles into space.

Astronaut James Lovell had that epiphany 50 years ago as he became one of the first astronauts to orbit the moon.

Lovell spoke at the Washington National Cathedral on Tuesday night (Dec. 11) as part of a celebration of the 50th anniversary of the 1968 Apollo 8 mission that sent Lovell and fellow astronauts William Anders and Frank Borman into space to circle Earth's gray satellite.

The mission, which lasted from Dec. 21 to Dec. 27, 1968, included an unusual religious element: As the trio of spacefarers rounded the moon on Christmas Eve, they paused to read the first 10 verses from the Book of Genesis.

"From the crew of Apollo 8, we close with good night, good luck, a Merry Christmas and God bless all of you — all of you on the good Earth," Borman said, in what was then the most-watched broadcast in history.

The themes of religion, space and caring for the "good Earth" were recounted over and over Tuesday evening as religious leaders and NASA officials addressed a crowd gathered beneath a canopy of swirling stars projected onto the cathedral's sprawling ceiling.

Randy Hollerith, dean of the cathedral, opened the festivities by reflecting on the unique way Apollo 8 impacted life here on Earth — especially the famed "Earthrise" photo.

"This amazing mission that I would call a pilgrimage revealed not only the dark side of the moon, but it gave us the most powerful images of our small and fragile world — God's precious gift, awash in an unimaginably large universe," Hollerith said. "I think of it as a holy journey not only for what it accomplished, but for what it revealed to us about our place in God's grand creation."

Hollerith's sentiment was echoed by Michael Curry, presiding bishop of the Episcopal Church, who drew parallels between the experience of spaceflight and encounters with divine mystery.

During his address, Curry discussed how cosmic awe can fuel Earth-bound activism. He said many have claimed the famous Apollo 8 "Earthrise" photo helped jump-start the modern environmentalist movement, and he called on those present to continue that tradition by taking action on climate change.

"This is God's world. We are here because the great God Almighty looked back and said, 'I'm lonely; I'll make me a world.' Deep in the fabric of this creation, we are a part of it — not the sum total of it," Curry said during his talk, which was broadcast live on NASA TV.

He hoped Tuesday's commemoration would be "a moment of re-consecration and dedication" of the mission of NASA and others "to explore new worlds, to seek out vast knowledge and then to mobilize the great knowledge of science and technology and the wisdom of humanity, to mobilize it now to save this oasis, our island home."

To drive his point home, Curry led the crowd in a slow, soft rendition of "He's Got the Whole World in His Hands."

Curry's environmentalist message likely resonated with the next speaker, NASA Administrator Jim Bridenstine. Earlier this year, the former Republican congressman from Oklahoma became one of the few high-level Trump appointees to throw his support behind the overwhelming scientific evidence for climate change and declare that humans are contributing to it.

Bridenstine's remarks at the cathedral focused on the sheer audacity of the Apollo 8 mission. He noted that the astronauts' Christmas message reached those in Soviet Russia, where religious celebrations were discouraged by the officially atheistic government.

He then cited the Genesis passage to frame NASA's plans to return to the moon. He explained that ice found there could provide resources and even rocket fuel for future space missions to Mars, the moons of Jupiter and beyond.

That Scripture passage says that "God separated the waters, the water below the firmament … and the waters above the firmament," he said. "We now know that there are hundreds of billions of tons of water ice at the poles of the moon."

Religion has played a perhaps surprising role in the space program since the beginning.

A few months after the Apollo 8 Scripture reading, Apollo 11 astronaut Buzz Aldrin, a Presbyterian, had Communion on the moon — complete with bread and a small vial of wine — just hours before stepping out on the lunar surface with Neil Armstrong. Astronaut Edgar Mitchell carried microfilmed copies of the King James Bible on Apollo 14.

In 1996, astronaut Jeffrey Hoffman, who is Jewish, read the opening verses of Genesis from a Torah scroll while in orbit.

And in 2007, the Malaysian space agency convened a group of more than 150 Islamic scholars to determine how Muslim astronaut Sheikh Muszaphar Shukor could pray while orbiting the planet in the International Space Station. 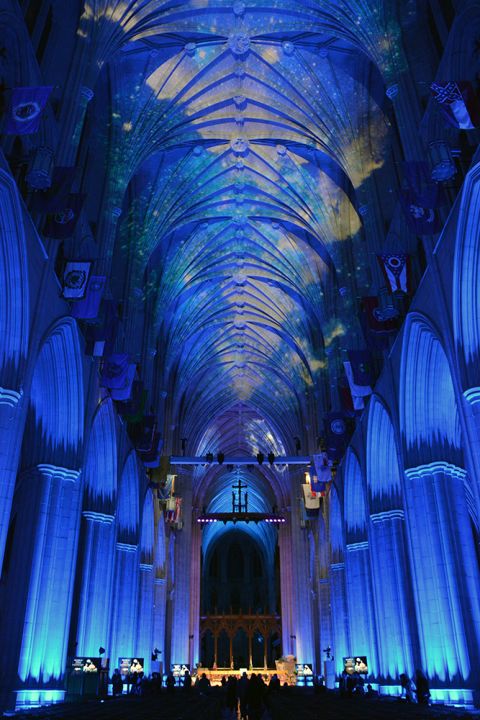 Projectors illuminate the ceiling of the Washington National Cathedral scenes of the cosmos on Dec. 11, 2018. (RNS/Jack Jenkins)

Fusions of space and faith have also sparked controversy.

The Apollo 8 Genesis reading triggered a lawsuit by famed atheist activist Madalyn Murray O'Hair, who argued the crew's actions violated the Establishment Clause of the First Amendment. The case made it all the way to the Supreme Court, which dismissed it by citing lack of jurisdiction.

On Tuesday night, Hollerith mentioned that the National Cathedral retains a piece of the otherworldly in its walls. One of the stained-glass windows in the main sanctuary is called the "Space Window" — a gift from former NASA Administrator Thomas O. Paine — and contains a piece of moon rock collected during Apollo 11. The window was illuminated for the occasion.

While NASA doesn't promote any specific faith or religion in general, the agency's work can touch on broader spiritual concerns, Bridenstine told RNS.

"I will tell you, as the administrator, when I talk to people in the community, there is an element of spirituality that is present in the work that we do," he said. "The Scripture is very clear that God created the heaven and the earth. … There are other spiritual questions, like are we alone in the universe? Could there be life on a world that is not our own? These are scientific questions, but also gets to maybe a deeper philosophical understanding of 'what is our place in the universe?' "

Asked about the possibility of sending faith leaders into space, Bridenstine said NASA "absolutely" would be amenable to the idea.

"I think it'd be fantastic — why not?" he said, pivoting to a discussion of NASA's role as customer in the rapidly expanding private space industry.

"The vision I would like to present is a vision where anybody from any walk of life would have access to space, the same as we have right now to airliners," he said. "It doesn't matter if it's somebody from the clergy, or just a faith leader of some kind — everybody should have access."

The evening concluded with an address from Lovell, who recounted in vivid detail his first historic journey around the moon and back.

As he reflected on his first thoughts upon seeing the Earth emerge above the lunar horizon, he repeated the evening's theme: Traveling to the moon was about exploration, yes, but also about understanding life here on Earth.

He paused, then added: "In my mind, the answer was clear: God gave mankind a stage on which to perform. How the play ends is up to us."

EarthBeat | Bishops and astronauts gather in Washington to remember Apollo 8