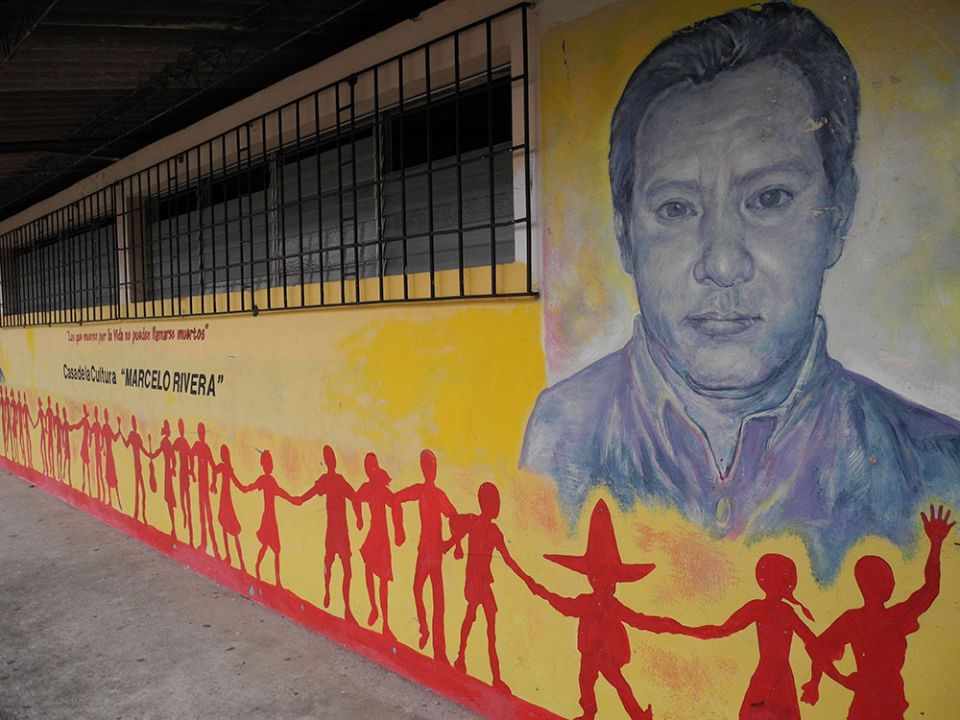 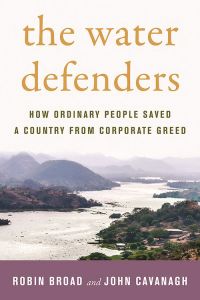 In 2009, a grassroots group working to stop a Canadian company from opening a gold mine in central El Salvador was chosen to receive a human rights award in Washington, D.C. A few months before its leaders were to travel to the United States, however, one of them — Marcelo Rivera — vanished. His family and friends spent a dozen agonizing days searching before an anonymous tip led them to a dry well where they found his tortured, mutilated body.

The group, including Vidalina Morales and Rivera's brother, Miguel, received the Letelier-Moffitt Human Rights Award that October at the nonprofit Institute for Policy Studies. The award is named for former Chilean diplomat Orlando Letelier and his assistant, Ronni Moffitt, who were killed by a car bomb in Washington in 1976.

At the award ceremony, Morales described the efforts by the water defenders of El Salvador's central Cabañas department to keep Canadian-based Pacific Rim Mining Corp. from opening a gold mine in their area. Not only did they want to block the mine, she said, they wanted the country to ban all mining of metals.

But the story had a complicated twist. The mining company, which had not been granted a permit to open the mine, had sued the country for more than $300 million to compensate it for costs and for the loss of future profits.

Listening to the presentation, John Cavanagh, who was director of the Institute for Policy Studies and is now a senior adviser, and Robin Broad, a professor of international development at American University in Washington, were appalled. Marriage partners as well as fellow researchers, the two were determined to understand how a company could so blatantly hold a country hostage.

Their investigation took them to the hills of El Salvador, the halls of the World Bank and a community in the Philippines that faced a similar situation. The result is The Water Defenders: How Ordinary People Saved a Country from Corporate Greed, which recounts nearly two decades of grassroots struggle, beginning in the early 2000s.

Part history, part environmental organizing case study, the book chronicles the community's struggle against the mine from the early 2000s to the campaign's unlikely conclusion in 2017, when El Salvador became the first country in Latin America to completely ban metal mining.

It also delves into the murky world of international investor-state arbitration proceedings — which are often a condition of free-trade agreements — in which transnational companies can sue a country for alleged failure to comply with national or international laws that protect corporations.

"It was a David-and-Goliath battle," Morales said at a virtual presentation of the book on July 13. "We know how capable the companies are, how they can also deceive decision-makers. We saw this starting in 2005, around the time the company came to Cabañas." 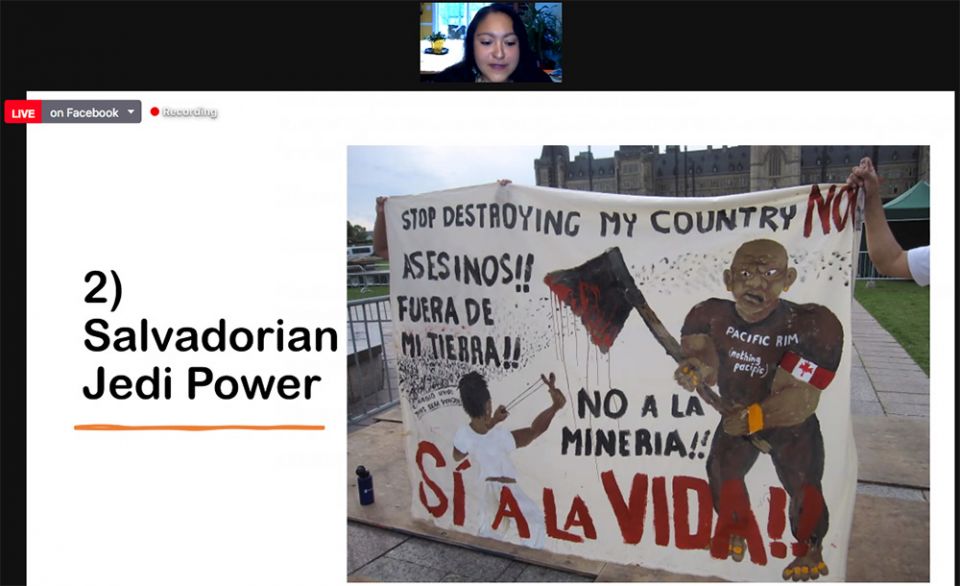 At a virtual book launch for "The Water Defenders" July 13, Laura Avalos, a Salvadoran woman living in Canada, describes protests there in support of water defenders. (EarthBeat screenshot)

When Pacific Rim started prospecting in the area and residents heard the word "mine," the book's authors note wryly, their first thought was land mines. The horrors of civil war and officially sanctioned torture were still fresh in people's minds. But when springs and other water sources began to dry up, grassroots leaders in Cabañas took aim, drawing on experience they had gained fighting a landfill and a hog farm promoted by the local mayor.

Organizing against the mine took effort, creativity and enormous perseverance. Marcelo Rivera, who had founded a local cultural center, led cultural events that raised awareness and brought local people together around the mining issue.

There was a soccer tournament organized by the mining company, in which the local team had its jerseys printed with anti-mining slogans. And there was the emphasis on water — people weren't opposing the mine for its own sake, but for the threat to the water on which their lives and livelihoods depended.

Pacific Rim, meanwhile, was courting local government officials. To gain the upper hand, the grassroots organizers had to broaden their coalition. That meant bringing into the coalition people who had once been sworn enemies — members of the left-wing Farabundo Martí National Liberation Front and the right-wing ARENA party, which had sown terror during the civil war.

"It was fascinating to see them go beyond ideology, if you will, for the common good," Cavanagh told EarthBeat.

The Catholic Church weighed in, as well. The José Simeón Cañas Central American University — where six Jesuit priests, their housekeeper and her daughter were brutally murdered in 1989 because of the Jesuits' outspokenness about government abuse — was a natural ally and conducted crucial national opinion surveys that revealed widespread opposition to mining.

More reluctant was San Salvador's conservative Archbishop Fernando Sáenz Lacalle, whose pro-business stance contrasted with that of his best-known predecessor, St. Óscar Romero. The archbishop was unreceptive to the water defenders' overtures until someone mentioned that the mining company planned to use cyanide to extract the gold from the ore.

It turned out that Sáenz Lacalle had a degree in chemistry, and the mention of cyanide was enough to flip him. His successor, José Luis Escobar Alas, who had disappointed progressive Salvadorans with his lukewarm position on human rights cases, also proved to be a supporter. An admirer of the Jesuits, his eventual outspoken position against the mining company was rooted in part in the teachings of Pope Francis, including the encyclical "Laudato Si', on Care for Our Common Home."

Meanwhile, the Institute for Policy Studies and others formed an international coalition to provide both technical assistance, if requested, and political pressure from outside the country. Salvadorans living in Canada led protests there against Pacific Rim. And the coalition arranged a visit to El Salvador by the governor of a province in the Philippines affected by a mine operated by Canadian-Australian OceanaGold, which had bought Pacific Rim's El Dorado mine in El Salvador. His presentations to Congress and government officials were crucial for winning passage of the 2017 anti-mining bill.

Even before that legislation, however, the government had refused to convert Pacific Rim's exploration permit to a production permit, on the grounds that the company failed to file required documents and obtain landowners' consent. In 2009, when the government blocked the company's bid to acquire a mining concession, Pacific Rim took El Salvador to international arbitration.

The company filed its complaint with the World Bank's International Centre for Settlement of Investment Disputes in Washington, D.C., one of several such panels, seeking more than $300 million in damages. The case dragged on for seven years before a tribunal dismissed it in October 2016 and ordered OceanaGold to pay El Salvador $8 million in legal costs. 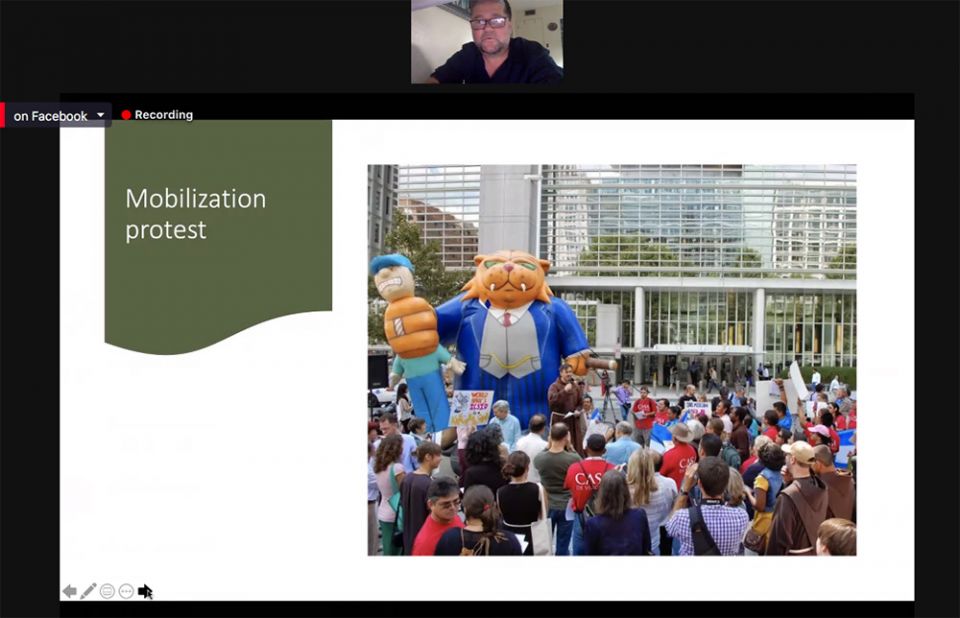 At a virtual book launch for "The Water Defenders" July 13, Manuel Pérez Rocha of the Institute for Policy Studies describes protests against the World Bank's investor-state arbitration tribunal in Washington, D.C. (EarthBeat screenshot)

"The company just did everything wrong. They ticked off even conservative governments, because they were treating them in the same way that foreign corporations have always treated [countries] — with arrogance and stupidity," Cavanagh said. "The company was arrogant and stupid and just thought, 'We'll buy people off, because we always do,' and they almost did."

The water defenders won, but the cost was high. Around the time the permit was denied in 2009, they began receiving threats. Several who were close to the right-wing governing party but opposed to the mine were shot to death, and Marcelo Rivera was disappeared, tortured and murdered in an episode grimly reminiscent of the worst military abuses during the civil war.

The murderers have never been brought to justice — a pattern repeated throughout the region, as local people stand up defense of their land, forests and rivers. Latin America is one of the most dangerous parts of the world for environmental defenders, according to the nonprofit watchdog group Global Witness.

One glimmer of hope came in early July, not long before the launch of The Water Defenders, when a court in neighboring Honduras found a former company executive guilty in the murder of Berta Cáceres, a Lenka Indigenous women who had led her community's opposition to construction of a hydroelectric dam. It remains to be seen whether the murderers of Rivera and the others in El Salvador will ever face justice.

Meanwhile, Broad, Cavanagh and their colleagues are seeking to win the dismantling of arbitration boards like the one at the World Bank, which critics say can cost low-income countries huge sums of money that could be used to fight poverty at home.

"The pandemic did shake everything up and it interrupted all of these campaigns and debates and fights, but this is one that will come back," Cavanagh said of the battle against the arbitration panels.

The U.S. could face such a case if Canada's TC Energy Corp. proceeds with an arbitration case against the U.S. over the Biden administration's halting of the Keystone XL pipeline. If that happens, said Cavanagh, the case would become "the new poster child of everything that's wrong with the rules." Such a high-profile case, he said, could turn the tide, "and so hopefully, hopefully, [inclusion of arbitration provisions in trade deals] will be gone in five years."