A bolder embrace of Laudato Si' in the U.S. requires rejecting individualism, indifference and the "false idol of economic growth" that permits reckless exploitation of the environment, Chicago Cardinal Blase Cupich said at the start of a conference seeking to bolster the response of the nation's Catholics to climate change and the pope's landmark ecological encyclical.

Cupich challenged Catholics to see sacrifice as "essential to saving our planet" and called on young people to meet with their bishops and priests to share their concerns about climate change and urge them to speak out on the environmental challenges facing the world.

"I am convinced that it is useless to talk about advancing a culture of life absent a vigorous commitment — both by individuals and communities — to making the sacrifices required for improving the socioeconomic, ecological and political crises of our time," Cupich said.

The cardinal's remarks came during the opening event at the second "Laudato Si' and the U.S. Catholic Church" conference co-hosted by the Catholic Climate Covenant and Creighton University. The three-day conference, the second in a series of three biennial gatherings, is an effort to mobilize greater action within the U.S. church in response to Pope Francis' 2015 encyclical, "Laudato Si', on Care for Our Common Home."

Held virtually because of the coronavirus pandemic, the conference attracted 2,600 registrants, according to organizers. The participants included a wide mix of Catholics: priests and women religious, parish ministers, teachers and academics, old and young.

In introducing Cupich, Emily Burke, a recent Creighton graduate, said the encyclical's publication "gave me great hope" as a young Catholic concerned about climate change. And while some parts of the church have increased their focus on climate, she said, "it's become clear that the U.S. Catholic Church is moving too slowly and tepidly on an issue that is quickly worsening [and] an issue that requires bold action."

A study she conducted with Creighton theologian Daniel DiLeo and sociologist Sabrina Danielsen found that less than 1% of diocesan columns written by bishops from the year before the publication of Laudato Si' to four years after have mentioned climate change, and in even fewer have bishops sought to teach substantively on the topic. 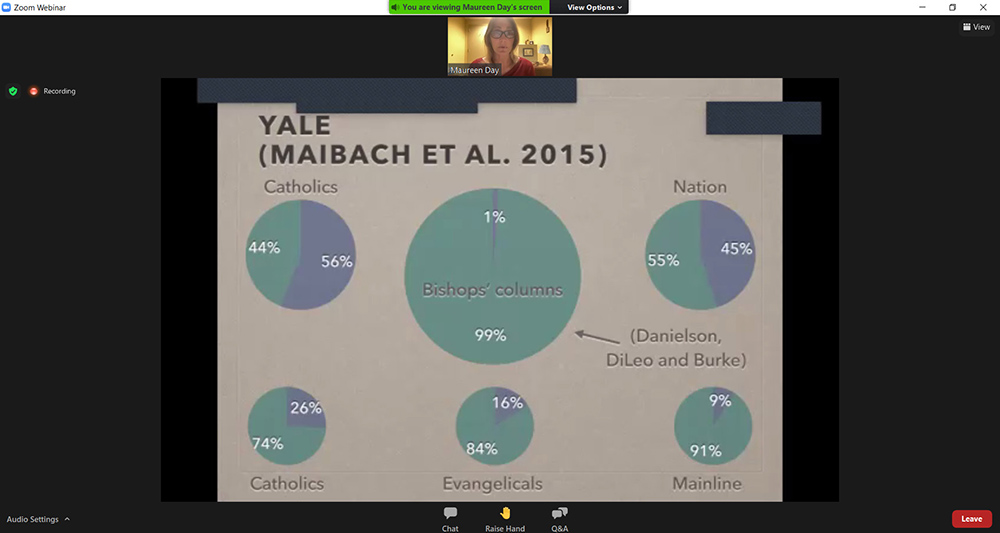 Maureen Day, assistant professor of religion and society at University of San Diego's Franciscan School of Theology, discusses studies on how much Catholics and the U.S. population has heard about Laudato Si'. The center circle reflects recent research that found less than 1% of U.S. bishops' columns published around the time of the encyclical's June 2015 release referenced climate change or global warming. (NCR screenshot)

"We need Catholic leaders who recognize what Vatican II called our griefs and anxieties, and who adequately address the climate emergency as an expression of the fullness of faith," Burke said.

Maureen Day, assistant professor of religion and society at the University of San Diego's Franciscan School of Theology, said that surveys taken around the time of the encyclical's June 2015 release indicated it has made a difference, though not enough. Getting more church leaders to talk about Laudato Si' is a key factor needed to change course, she said, along with addressing the nation's polarization, deeper links between faith and civic engagement, and a better understanding of humanity's relationship with the rest of creation.

Later, in a question-and-answer period, Cupich said that Francis' example shows that leaders can make a difference when they engage on issues of climate change and environmental challenges, and added that he hoped more in the church would take that responsibility.

"But at the same time, we have to make sure that everybody is all hands on deck for this to be dealt with," he added, urging young people to ask their pastors to give voice to their concerns.

"You have much more power than you really think, young people, in the minds of the adult world. So don't overlook or underplay your abilities," Cupich said.

In his speech, littered with citations from Laudato Si', Cupich laid out his own ideas on how to move the U.S. church from the "not enough" response on environmental questions that Burke and others have identified to a bolder embrace of the pope's encyclical throughout the church's ministries.

"What does the pope's challenging message mean for a Christian community that professes a commitment to promoting a culture of life, yet acts with indifference to the call to make the sacrifices needed to protect this common home that God has entrusted to us?" Cupich asked, calling the ecological crisis "the most challenging sign of our time" and one caused by human activity.

Like Francis, Cupich said it begins with an ecological conversion, which he broke down into spirituality, education and economics.

A core hurdle, he said, is an idolatry of money in the U.S. that "triggers the worst in us" and leads to individualism, indifference and irrational competition. Fueling that mindset has been a misinterpretation of "dominion" in the Book of Genesis as giving humanity free rein to exploit the Earth.

"This 'Promethean vision of mastery over the world,' as Pope Francis calls it, not only has had an impact on how we treat creation but is at the heart of the world's economic crisis, for we have come to adopt a false idol of economic growth as the sole purpose and overarching desire of society," Cupich said.

That mindset, he continued, has caused "many of us to turn a blind eye to the consequences this way of living has on people, our planet and our spirituality," and led to "the illusion that we are free to exploit the Earth for personal and national economic growth, without considering the lasting consequences of our exploitations."

"We have fallen into the misconception that material growth is synonymous with human development," Cupich said.

Misconceptions about development have also distorted notions of freedom and approaches to politics, he added. "While the sense of absolute freedom without responsibility has led us to take from the Earth more than we need, it has also alienated us from our fundamental identities as brothers and sisters of the same human family.

"Let's be clear," the cardinal said. "Sharing, solidarity and communion are neither anti-freedom values nor the basis of an anti-American 'socialist' plan. They are first and foremost Christian values, deep human values that are vital for actual human development."

The speech echoed some of the critiques of libertarianism that Cupich raised earlier this year, though he did not mention it directly. In March, Cupich said the political ideology was a central barrier to more people of faith embracing Francis' messages in Laudato Si'.

Speaking Tuesday night, Cupich echoed Francis' call for a shift from an economic model that prioritizes unfettered profits and growth to one that emphasizes integral human development and new ways of understanding progress.

"For that to occur, the economy should serve society and political life, not the other way around," he said. 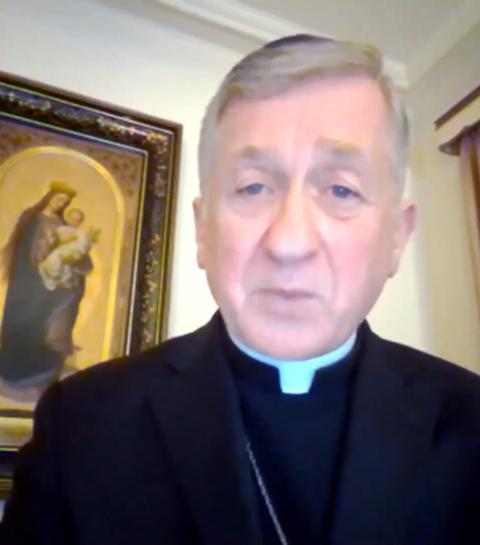 Along with that, there's a need for "bold politics" that can challenge "long-standing idols and free-market fundamentalism," Cupich added. He called on Catholics to become engaged in the political process, including advocating for protection of voter rights.

Ecological education can help promote new ways of thinking about life and humanity's relationship with nature, and can also counter ideas of consumerism and unregulated markets common to a utilitarian mindset, he said.

But systemic change to address environmental destruction cannot be left to governments and economic systems alone, Cupich said. Individuals, in their everyday practices and spirituality, have an important role to play in creating a more sustainable planet. Critical to that is sacrifice.

Cupich said the world's religious and ethical traditions all encourage substantial individual and social sacrifice to save the planet. And while at times it can seem that U.S. society has lost its ability for selfless actions, the cardinal said he found hope that it still exists in the majority of people who donned masks during the pandemic and the "enormous" sacrifices families make for their children. Such "sustained sacrifice," he said, is "the linchpin for building a public ethic of sacrifice in pursuit of a just and sustainable world."

"Pope Francis has been clear about the interconnected nature and complexity of the challenges we face, and the need to address them in unity, ever mindful that it is in God we trust. It is up to us to put aside our false idols and continually respond to the call to conversion that will lead to a more just, equitable and loving future," Cupich said.

The conference continues Wednesday and Thursday with a number of smaller sessions focused on eight ministerial tracks for further implementing Laudato Si'. In addition, there will be an update on U.S. involvement in the Vatican's Laudato Si' Action Platform and a closing address July 15 from Franciscan Sr. Ilia Delio.

A version of this story appeared in the Aug 6-19, 2021 print issue under the headline: Cardinal Cupich: US must reject 'false idol' of money.