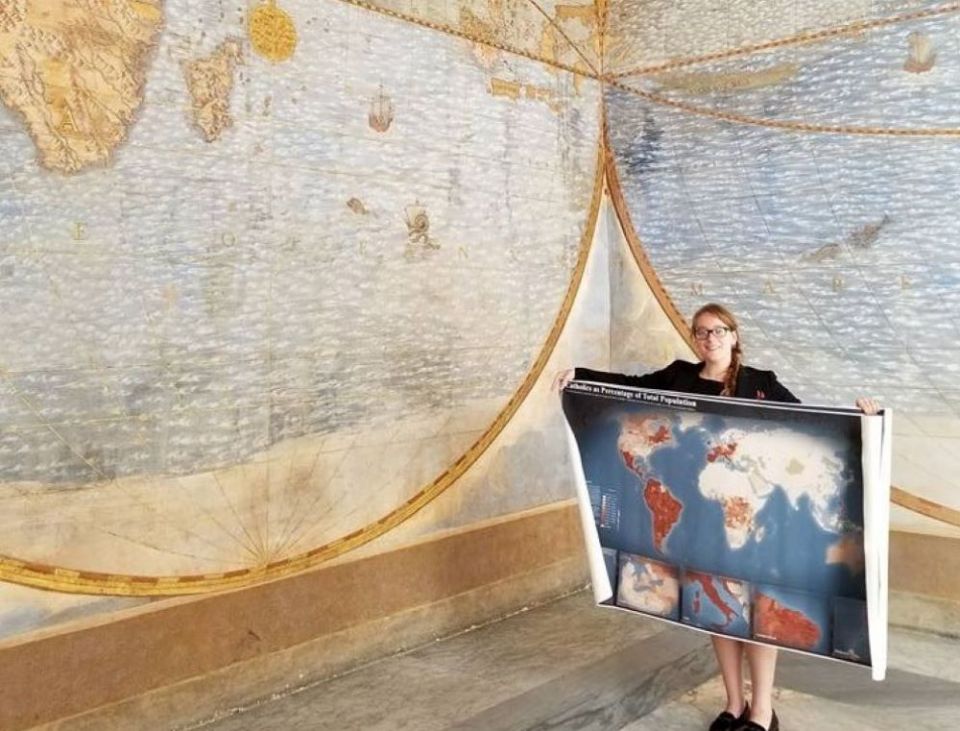 Molly Burhans, pictured in 2017 at the Third Loggia of the Apostolic Palace at the Vatican, has received the Sierra Club's EarthCare award. Her mission is to help the Catholic Church put its huge global landholdings to work for good. (Courtesy of GoodLands)

There was the study in Mali, where she realized that providing drinking water for people meant not just drilling wells, but tackling climate change. There was a project in Portland, Maine, in which she layered information onto a map to create a plan for urban pollinator habitat.

And crucially, there was her work with a women's religious community, where mapping helped convince the sisters that instead of selling part of their property, they could conserve it while still meeting their future needs.

Now Burhans' mission is to help the Catholic Church put its huge global landholdings to work for good on a planet where billions of people face a climate crisis.

On Sept. 17, the Sierra Club honored the 32-year-old founder of the nonprofit GoodLands with its annual international EarthCare award. Burhans sees it as validating the importance of science-based maps for making the social and economic decisions needed to address climate change, but also as recognition of the increasing role of faith-based groups working to dial down the global temperature.

Maps, she says, allow people to see relationships among environmental, social and financial factors in a way that spreadsheets do not.

"This integral approach to environmental stewardship and social impact and finance ... allows people to do what impact investment does with a big [stock] portfolio, but with a property portfolio," Burhans told EarthBeat.

That is extremely important for an institution like the Catholic Church, which with some 177 million acres is the world's largest landowner, according to the University of Notre Dame's Fitzgerald Institute for Real Estate. When Burhans launched GoodLands, she was surprised to find that not everyone saw the possibilities.

"When I started the idea of making land work for good, I thought everyone would understand food security, regenerative agriculture, conservation, all this stuff," she said. "And it was such a shock at the very start to see people do not understand this at all and can't see the value of it." 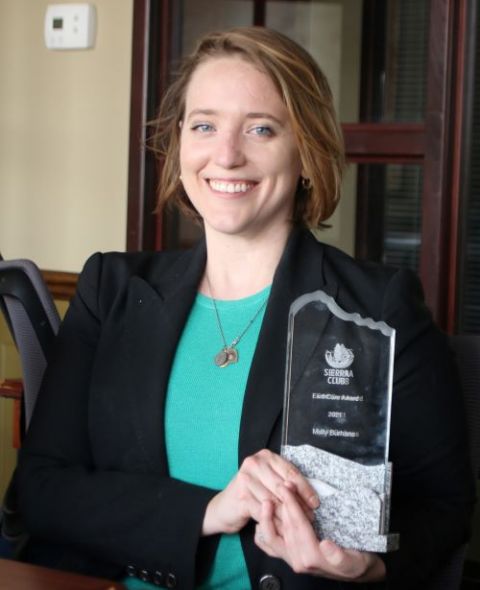 A second shock came when she discovered that not only did the Vatican lack digitized records of its worldwide landholdings, but many dioceses didn't even have all their property files in one place, let alone a spreadsheet listing the addresses.

"Not only do we likely oversee the largest network [of landholdings] under any unified umbrella globally," she said of the church, "but we don't know what we have."

The risks of that shortage of information — and the lack of transparency it can create — became evident with the Vatican's recent indictment of a once-powerful cardinal and nine others in a case involving a 350 million-euro ($410.4 million at the current exchange rate) London real estate deal.

In the wake of that scandal, the Vatican in June released its most detailed real estate records ever, showing some 5,000 holdings.

"I'm so hopeful that [the scandal] will help religious communities wake up a little bit and be very careful, much more careful, about their land," Burhans said, "because this is trillions of dollars of assets globally."

Burhans initially found little interest among church officials in mapping for ecological planning, which was her passion, so she took on other projects, mapping church health care institutions, helping dioceses look at potential impacts of closing schools or parishes, and helping religious communities think about finances and real estate.

In the past year, however, there have been more requests from dioceses and religious congregations interested in a more holistic approach. Among the maps available for free on the GoodLands website's "Catholic GeoHub" is one showing which Boston Archdiocese properties are at high risk of flooding.

Related: There's a map for that: GoodLands launches Catholic GeoHub

While GoodLands now has digitized most church landholdings in the United States, gathering the data needed for mapping in other countries is going more slowly. Nevertheless, the GeoHub also includes maps showing church jurisdictions worldwide, Catholic population and even the 10 dioceses with the greatest biodiversity.

The Catholic Church's landholdings include not just churches, schools and hospitals, but also monasteries, retreat centers and convents with farmlands and forests, as well as property donated by individual Catholics.

Burhans considers GoodLands' work crucial, because as church properties are sold to developers, the possibility of managing land as "green infrastructure," to help buffer against climate change, diminishes. Multilayered maps can show not only where properties exist, but how they can best be managed.

"We are such a major actor," Burhans said of the church. "If we don't do this... we will not address biodiversity and climate change in time."

Watching those opportunities slip away, as properties that were on the first GoodLands map have been sold off, has been "a constant grieving process," she said. "We have the infrastructure. It's falling through our hands like holding water in a sieve right now, sadly, but we still we have the infrastructure to really make conservation a charism and become one of the largest global players in transitioning to sustainable agriculture and land use and conservation." 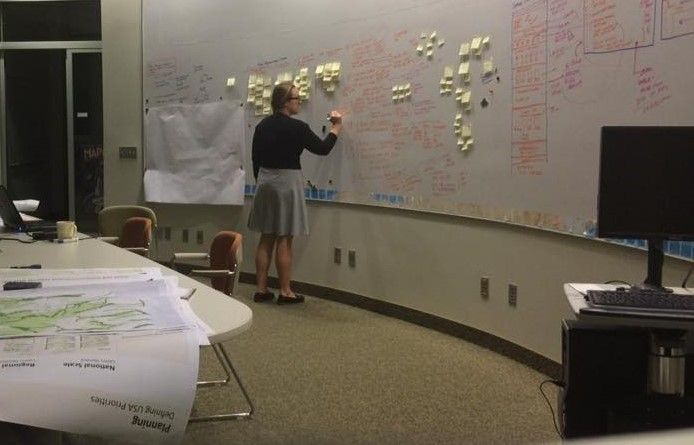 Molly Burhans works late at night in 2016 on a project that created a digital map portal of the Catholic Church's global landholdings. (Courtesy of GoodLands)

But for Burhans, technical expertise is not enough.

"We need the ecological conversion of many people," she said, echoing the call that Pope Francis has repeated in documents like Laudato Si' and Querida Amazonia. "Nothing really works until we get that conversion."

Amid climate change and other environmental crises caused by humans, she added, "it almost feels like we've reached this climax of original sin.... The ecological conversion is a breaking open of the heart. It involves contrition."

That, she said, is a perspective that an organization like hers, grounded in faith, brings to a field that is highly technical — and a reason she feels the recognition she has received from nonreligious groups, including the Sierra Club, the United Nations Environment Programme and the Ashoka Foundation, is important.

"One of the original, beautiful visions of GoodLands that we still have," she said, "is let's see Catholic conservation [reach] the scale of Catholic health care and education globally, as the largest global network the world has ever seen."

Editor's note: This story has been updated to indicate that the EarthCare award is an international award.