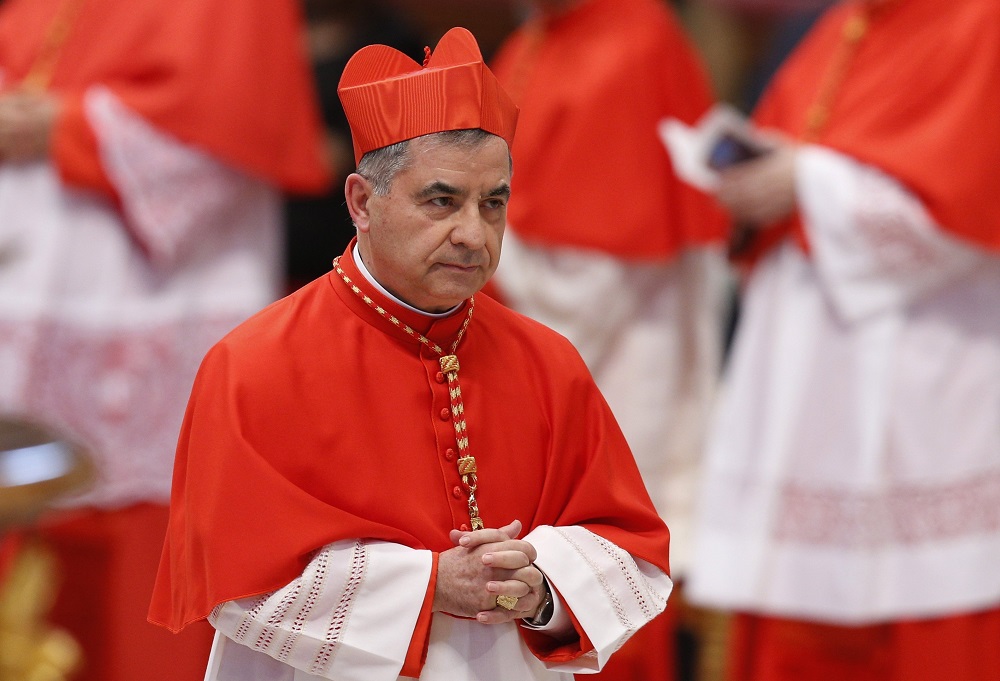 Italian Cardinal Angelo Becciu is pictured at the Vatican in this 2018 photo. (CNS/Paul Haring)

A Vatican judge on Saturday indicted 10 people, including a once-powerful cardinal, on charges including embezzlement, abuse of office, extortion and fraud in connection with the Secretariat of State's 350 million-euro investment in a London real estate venture.

The president of the Vatican's criminal tribunal, Giuseppe Pignatone, set July 27 as the trial date, according to a Vatican press statement.

The indictments were handed down following a sprawling, two-year investigation into how the Secretariat of State managed its vast asset portfolio, much of which is funded by the Peter's Pence donations from the faithful. The scandal has resulted in a sharp reduction in donations and prompted Pope Francis to strip the office of its ability to manage the money.

Five former Vatican officials, including Cardinal Angelo Becciu and two officials from the Secretariat of State, were indicted, as well as Italian businessmen who handled the London investment.

Vatican prosecutors accuse the main suspects of bilking millions of euros from the Holy See in fees and other losses related to financial investments that were funded in large part by donations to the pope for works of charity. The suspects have denied wrongdoing.

One of the main suspects in the case, Italian broker Gianluigi Torzi, is accused of having extorted the Vatican out of 15 million euros to turn over ownership of the London building in late 2018. Torzi had been retained by the Vatican to help it acquire full ownership of the building from another indicted money manager who had handled the initial investment in 2013, but lost money on what the Vatican said were speculative, imprudent investments.

Vatican prosecutors allege Torzi inserted a last-minute clause into the contract giving him full voting rights in the deal.

The Vatican hierarchy, however, signed off on the contract, with both the pope's No. 2, Cardinal Pietro Parolin, and his deputy approving it. Neither was indicted. In addition, Francis himself was aware of the deal and Torzi's involvement in it.

Vatican prosecutors have produced evidence suggesting the Vatican hierarchs were hoodwinked by Torzi and aided in part by an Italian lawyer — who was also indicted Saturday — into agreeing to the deal.

Torzi has denied the charges and said the accusations were the fruit of a misunderstanding. He is currently in London pending an extradition request by Italian authorities, who are seeking to prosecute him on related charges.

Also indicted was a onetime papal contender and Holy See official, Cardinal Angelo Becciu, who helped engineer the initial London investment when he was the chief of staff in the Secretariat of State.

Francis fired him as the Vatican's saint-making chief last year, apparently in connection with a separate issue: his 100,000-euro donation of Holy See funds to a diocesan charity run by Becciu's brother.

Vatican News, the in-house media portal, said Becciu had originally not been part of the London investigation but was included in May 2020 after it appeared that he was behind the proposal to buy the building. Prosecutors also accuse him of interfering in the investigation, by allegedly trying to have one of the witnesses change his story.

In a statement Saturday issued by his lawyers, Becciu insisted on the "absolute falsity" of the accusations against him and denounced what he said was "unparalleled media pillory" against him in the Italian press.

"I am the victim of a plot hatched against me and I have been waiting for a long time to know any accusations against me, to allow myself to promptly deny them and prove to the world my absolute innocence," he said. "Only by considering this great injustice as a test of faith can I find the strength to fight this battle of truth."

Becciu has denied wrongdoing in the London investment; he has admitted he made the donation but insisted the money was for the charity, not his brother.

One of Becciu's proteges, Cecilia Marogna, was indicted on embezzlement charges. Becciu had hired Marogna as an external consultant after she reached out to him in 2015 with concerns about security at Vatican embassies in global hotspots. Becciu authorized hundreds of thousands of euros of Holy See funds to her to free Catholic hostages, according to WhatsApp messages reprinted by Italian media.

Her Slovenian-based holding company, which received the funds, was among the four companies also ordered to stand trial.

Marogna has said the money wired to her was compensation for legitimate security and intelligence work and reimbursements for her expenses. Vatican News, citing the indictment, say she spent the money on purchases that were incompatible with the humanitarian scope of her company.

Also indicted were the former top two officials in the Vatican's financial watchdog agency, for alleged abuse of office. The watchdog agency had actually launched an international investigation into the London deal months before Vatican prosecutors had. But prosecutors say that by failing to stop the Torzi deal, they performed a "decisive function" in letting it play out, Vatican News said.

Other suspects didn't immediately respond to a request for comment Saturday.