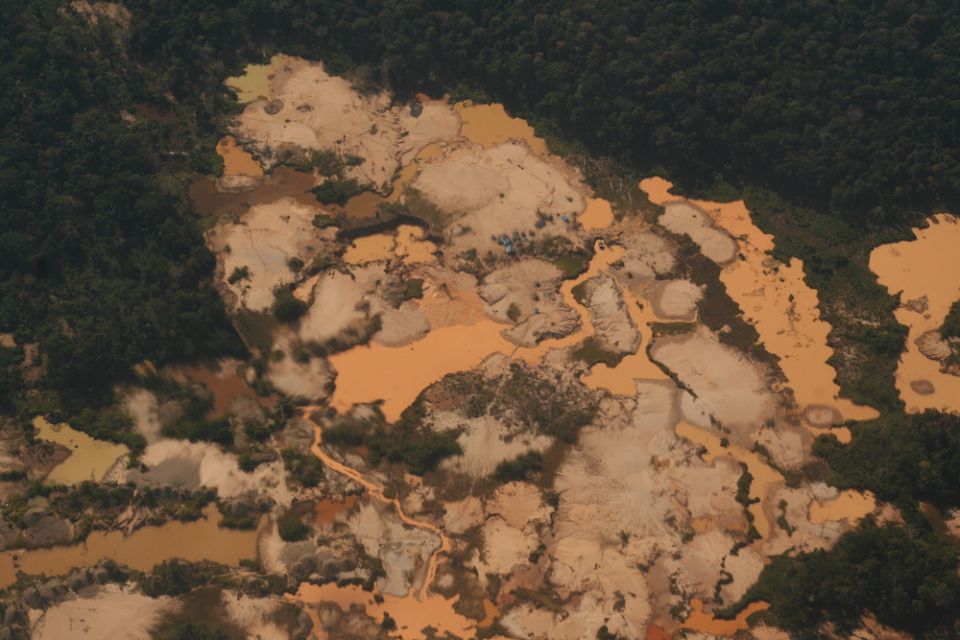 Four women and an adolescent boy were killed, several more people were injured and more than 60 were left homeless by a landslide Wednesday at a gold mine in the Esmeraldas region on Ecuador's north coast. There are more than 50 small mines in the same area — some legal, many illegal, and all operating under conditions that are hazardous for the workers and their families.

Even the legal mines should not be operating now, because of court injunctions dating back a decade and because of the coronavirus pandemic, according to Fr. Enry Armijos, coordinator of Ecuador's National Ecological Ministry Network, which was launched three years ago by the Catholic Church, but which also includes other organizations.

Government officials know the mines are functioning, but turn a blind eye, Armijos told me the day after the landside. "No one says anything, except when a catastrophe like this happens," he said.

Meanwhile, backhoes gouge craters in the mature tropical forest in the remote region near the Colombian border. The dream of a fortune draws Ecuadorians and Colombians from far away, especially now that other jobs have vaporized with the pandemic. Miners and their families live near the craters in shacks made of plastic tarps.

Stripped of trees, the soil is unstable, and little or nothing is done to shore up the sides of pits like the one that collapsed on Wednesday. Heavy rains cause landslides and wash silt, often combined with the mercury and cyanide used to process the gold, into a nearby river. 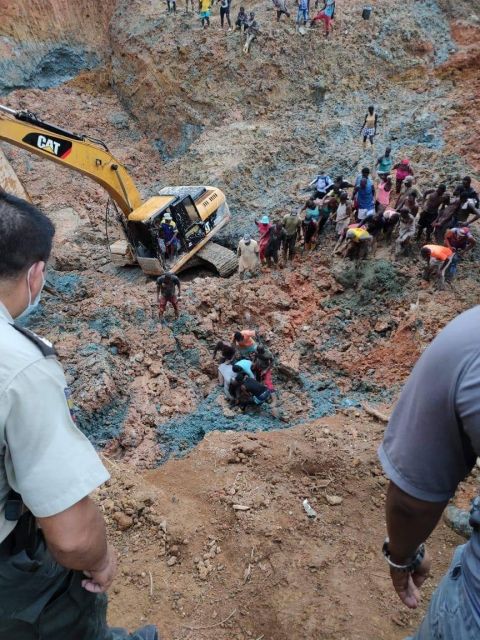 Rescuers search for bodies after landslide trapped miners in Ecuador. (Photo/Courtesy of RENAPE)

The story is not uncommon. With international gold prices high, this kind of low-tech, high-risk mining has spread around the globe. The World Bank estimates that this style of mining employs at least 40 million people worldwide, in most of Africa, all of the Amazonian countries, Central America, Indonesia and other Asian nations.

Miners and some economists argue that this kind of mining provides more employment than large-scale commercial mines and drives local development. That's true to some extent — poverty rates have decreased dramatically in several regions of Peru where unregulated mining has been rampant for decades.

But the cost is high. Camps around unregulated mines tend to be lawless, violent places where women and girls are trafficked for sex and bandits ambush miners heading to town to sell their gold. The business, which some say is more lucrative than the illegal drug trade, is linked to organized crime and illegal groups, including the Revolutionary Armed Forces of Colombia, which launder money through the mining operations and use the gold to finance their activities.

The environmental damage from this kind of mining, where workers use backhoes to dig huge pits or blast away the soil with high-pressure hoses, is also extensive. Along with deforestation, mercury from gold processing accumulates in fish — and in the bodies of people who eat them. (That's also a legacy of the California gold rush, by the way.)

Of course, there would be no gold rush if no one bought gold. But despite consumer-awareness campaigns and increased official scrutiny, illegal gold is "laundered" through legal refineries in places like Switzerland and the U.S., making it appear to be legal. This award-winning multimedia report by journalists Paula Dupraz-Dobias and Dominique Soguel provides a striking close-up view of how the process works.

There are occasional bright spots in this dismal panorama. In Colombia, a few private investors bought some land in the late 1990s that had been stripped bare and cratered. They recontoured it, added nutrients and planted a combination of native and commercial timber species. When I visited two decades later, I saw a healthy secondary forest, where once-dead streams run again and at least one jaguar triggered a camera trap.

In Ecuador, in the wake of this week's tragedy, the ecological ministry network is calling for a halt to legal and illegal mining that is contaminating water sources, damaging ecosystems and affecting the health of local residents. It also urges greater oversight and enforcement of laws, as well as environmental remediation and reparations for harm to health.

The coming week will bring a much-changed Thanksgiving Day. Many people who usually gather with their extended families will limit themselves to a meal with those in their household, and some may find themselves alone. In the three decades I've lived outside of the U.S., some years I've celebrated with others, some years the day has passed without fanfare.

But it's always a good day for us to pause and reflect. Although we miss our families, there are things for which we can be thankful. To help us, Xavier University in Cincinnati, Ohio, offers a page of prayers for Thanksgiving — for gratitude, for healing and for an end to hunger.

The day after Thanksgiving somehow became a frenzied shopping day in the U.S., but REI, the Seattle-based outdoor equipment cooperative, put a different spin on the day back in 2015 with its #OptOutside campaign. The folks at Creation Justice Ministries have picked up the idea, making it next week's suggestion in its list of weekly ways of caring for creation.

Amid the pandemic, going for a walk, jog or bike ride outdoors — with mask and distancing, as appropriate — seems like an especially good way to give thanks this year for and with creation.

What's the place where you feel most closely connected to the rest of creation? Snap a photo and tell us about it in 150 words or less, by submitting your Small Earth Story here.