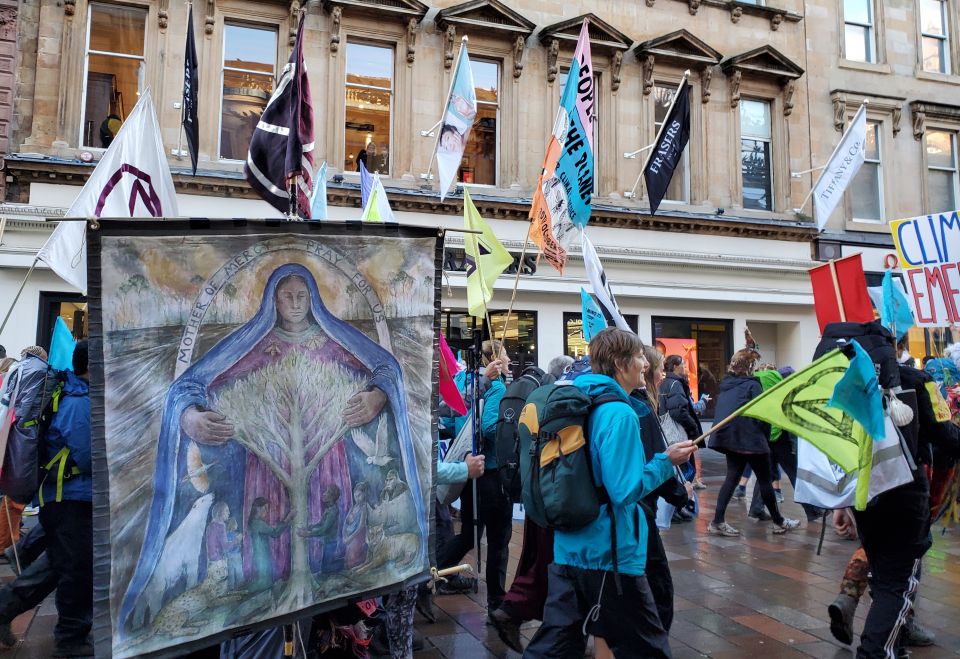 A banner showing Mary embracing a tree is seen in the procession of "climate pilgrims" arriving in Glasgow, Scotland, for the U.N. climate conference known as COP26. (NCR/Brian Roewe)

Glasgow, Scotland — Ready with prayers, presence and pressure, the faith community assembled this weekend here in Scotland's largest city, which for the next two weeks will be the center of international deliberations at a critical juncture in the global response to human-driven climate change.

COP26, shorthand for the 26th Conference of the Parties to the United Nations Framework Convention on Climate Change, officially began around midday Oct. 31.

The high-stakes summit comes as the science of climate change has crystallized, its impacts have come more clearly into focus around the world and time to avert worst-case scenarios is running short.

"We stand at a pivotal point in history," Patricia Espinosa, UNFCCC executive secretary, said during the opening ceremony. "Humanity faces several stark but clear choices. We either choose to achieve rapid and large-scale reductions of emissions to keep the goal of limiting global warming to 1.5 [Celsius] — or we accept that humanity faces a bleak future on this planet."

Several hundred people gathered in George Square, just blocks from the Scottish Events Centre where the conference had just opened, to pray for world leaders who will convene over the next two days for speeches and high-level meetings.

"We remind governments of their commitments made in Paris in 2015 to limit global warming to 1.5 degrees," stated a multifaith declaration read at the event and signed by more than 50 religious leaders from Scotland and the United Kingdom. That goal is the more stringent maximum temperature target under the Paris Agreement, and scientists have said global greenhouse gas emissions must be nearly halved by 2030 to keep it within range.

COP26 is the first time that countries are required under the Paris accord to submit new, more ambitious plans to slash emissions. That agreement obligates countries to update their pledges every five years, giving the Glasgow conference added importance in order to meet the 2030 emissions reductions. 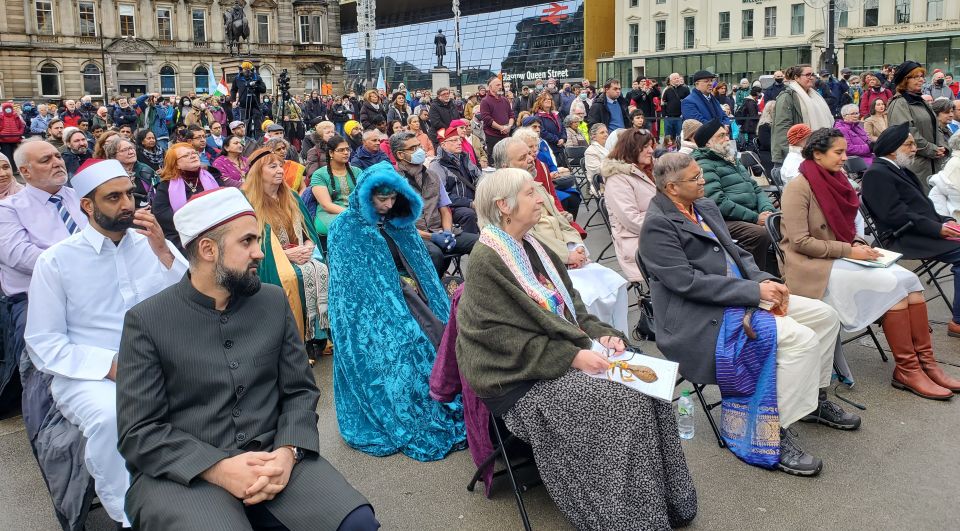 Participants listen to speakers during a multifaith prayer service on Oct. 31, the opening day of the U.N. climate conference in Glasgow, Scotland. (NCR/Brian Roewe)

The latest multifaith statement reiterated many of the calls to COP26 people of faith have been making for months, asking governments to swiftly and justly transition the global economy from fossil fuels toward renewables and compensate communities already affected by climate change.

At the same time, faith groups view the push to net-zero emissions by midcentury as an opportunity to achieve cleaner environments and more sustainable and just ways of cohabiting on this planet.

"Across our doctrinal and political differences, we know that we must change our ways to ensure a quality of life which all can share, and we need to provide hope for people of all ages, everywhere, including future generations. To offer hope in the world we need to have confidence that those in power understand the vital role they have to play at the Glasgow COP26," the statement read.

"We come together to hold the negotiators in our hearts, that they might have the wisdom, compassion and courage necessary to work together to safeguard the future of humanity and all life on our precious, fragile planet," said Rose Drew, CEO of Interfaith Glasgow.

Bishop Brian McGee of the Diocese of Argyll and the Isles on Scotland's western coast told EarthBeat after the service that their intention was to offer prayers for world leaders, but also exert pressure on them to deliver on public demands for an urgent response to the climate crisis.

"Certainly that's what a lot of people have been doing, is contacting the politicians and explaining to them that this is really, really important and we have to do something here," he said.

McGee linked the day's Gospel reading about the Golden Rule to Catholic action at the climate summit, saying it was a matter of loving both God's creation and those suffering the impacts of global warming. The bishop praised Pope Francis' "extraordinary leadership" in widening the ecological question beyond conservation.

"It's about how we treat people. It's about justice in all its forms," he said.

Although Francis will not be present at the world leaders summit Nov. 1-2, he has conveyed his convictions about urgent action on climate change directly to heads of state in meeting after meeting in recent weeks, including with U.S. President Joe Biden and Indian Prime Minister Narendra Modi, whose countries currently rank second and third in greenhouse gas emissions.

"Let us pray that the cry of the Earth and the cry of the poor will be heard; that this meeting can give effective answers by offering concrete hope to future generations," the pope said after the Angelus on Sunday. He also called attention to recent flooding that has decimated parts of the Philippines and the ongoing suffering in Haiti caused by extreme weather this year. 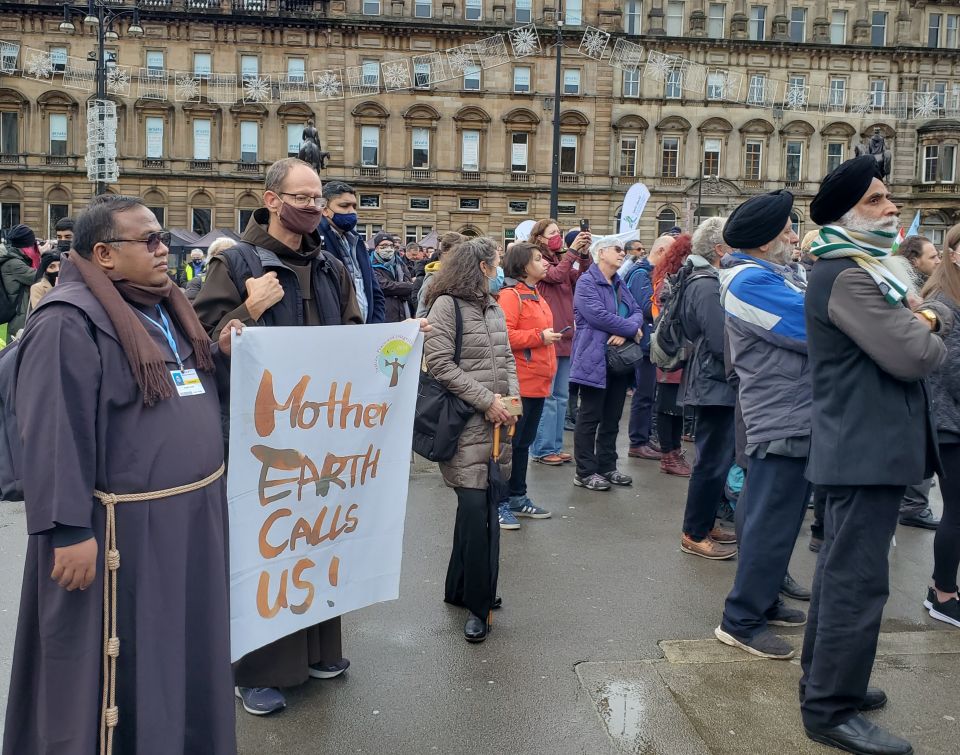 Br. Angel Cortez, left, listens during the multifaith service Oct. 31. He said he traveled to COP26 in Glasgow to bring the voices of fellow Filipinos who were struck by three major typhoons amid the COVID-19 pandemic in 2020. (NCR/Brian Roewe)

Franciscan Br. Angel Cortez, who joined the prayer vigil, said he came to Scotland to bring the voices of his fellow Filipinos, who in the midst of the pandemic last year were struck by three major typhoons in three weeks.

"That's the most important thing, that world leaders are here but we need to listen to the people who are really affected by climate change," he told EarthBeat.

As religious leaders prayed, presidents and prime ministers at the G20 summit in Rome agreed to end funding for overseas coal plants by the end of the year, though they did not address domestic operations.

They also reaffirmed the Paris accord's target of reaching global net-zero emissions "by or around mid-century," as well as a commitment to provide $100 billion annually to help developing nations adapt to and mitigate climate change. Observers, including U.N. Secretary-General António Guterres, signaled that those commitments were modest and that more work remains for Glasgow.

While I welcome the #G20's recommitment to global solutions, I leave Rome with my hopes unfulfilled — but at least they are not buried. Onwards to #COP26 in Glasgow to keep the goal of 1.5 degrees alive and to implement promises on finance and adaptation for people & planet. pic.twitter.com/c1nhIDbA8m

On Oct. 30, the day before COP26 began, hundreds of "climate pilgrims" arrived in Glasgow, many after trekking hundreds of miles from starting points across the U.K. and Europe. Carrying banners, flags, musical instruments and a huge "serpent of capitalism," they processed along the River Clyde, where they halted briefly while a wedding exited a church. They then walked through the popular St. Enoch Square shopping district before assembling in George Square. 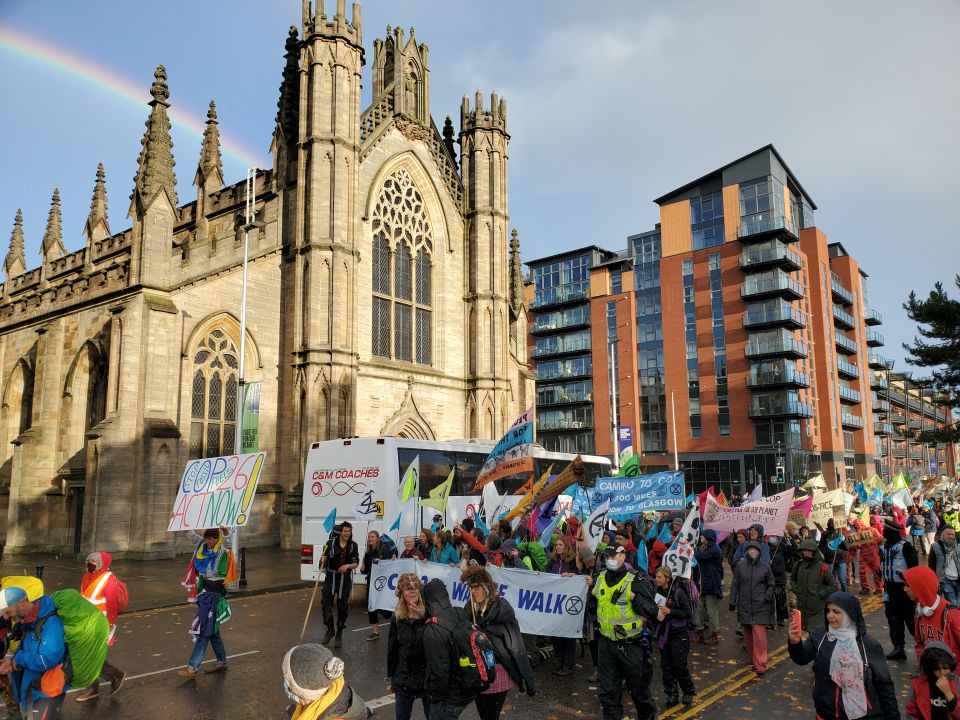 Helen Elwes carried a banner she had painted of Mary with her arms wrapped around a tree that sheltered people and animals beneath its branches. Inspired by Francis' encyclical "Laudato Si', on Care for Our Common Home," she began her journey in Bristol, England, saying it was in "the tradition of walking and praying at the same time."

"I don't know what we can do more than pray at this point," she told EarthBeat. "We do everything we can to help the leaders to make the vital, crucial actions that need to be taken."

"I've been praying for climate justice for a long time," she said.

Stephen Marcus, a Jewish leader of the Camino to COP pilgrimage organized by the U.K.-based interfaith arm of the Extinction Rebellion, said the pilgrims "wanted to send the message that we cared enough to walk 500 miles in the hope that that would have some impact on the politicians, to get them to act urgently." 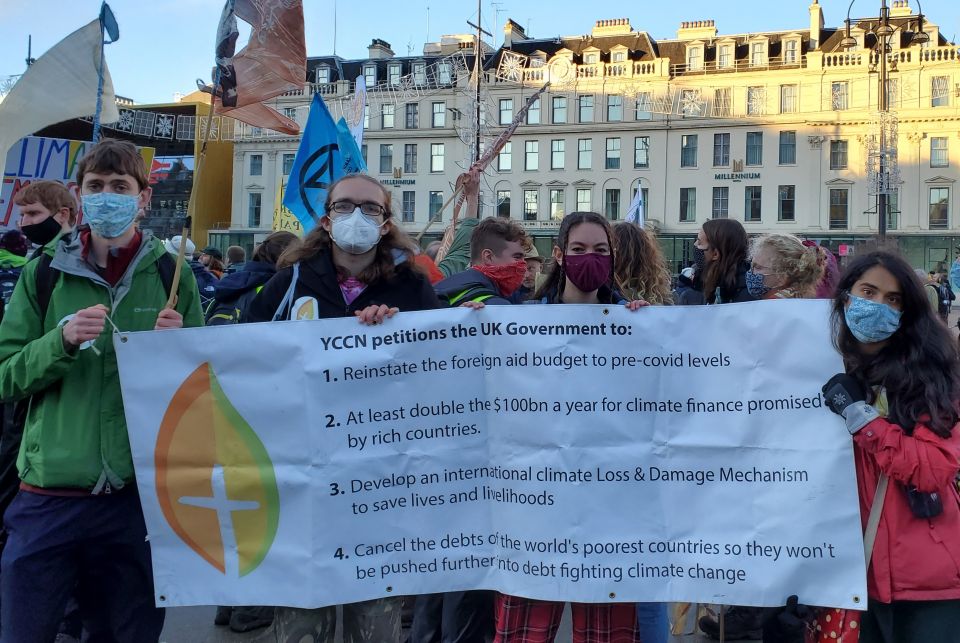 Annika Mathews and Molly Clark, two pilgrims in their mid-20s, are part of the Young Christian Climate Network. The U.K. group has prioritized fair climate finance, believing "no country should be going into debt or be pushed further into debt because of climate change," Clark said.

The two said their faith calls them to act for justice and stand with people who are marginalized and suffering as a result of climate change.

"It's affecting people across the world who actually are doing the least damage but are [experiencing] the greatest effects," Mathews said.

At the end of the pilgrims' procession, Indigenous leaders from South America described their own difficult journey to COP26, coping with visa requirements and quarantines imposed because of the COVID-19 pandemic, as well as the shortage of affordable accommodations.

"We are here to let people know that those who are making decisions, they are not to make decisions without our participation," a delegate of the Indigenous collective Minga Indígena from Chile's Patagonia region told the crowd through a translator. "We are the ones who are affected the most by climate change, and we want to be present in these negotiations." 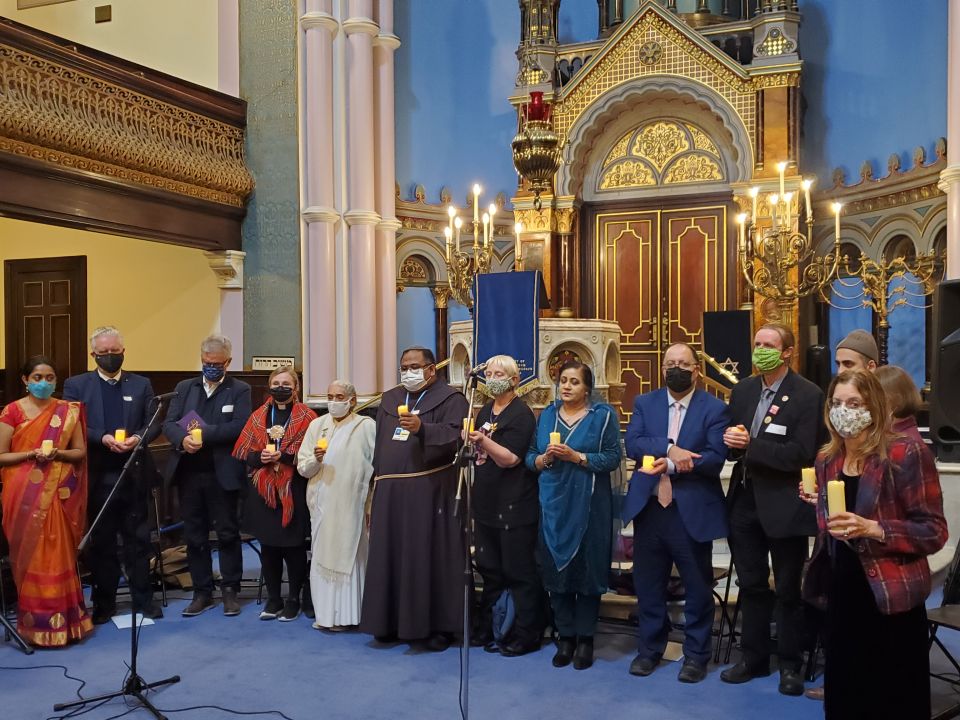 Representatives of various world religions participate in a multifaith dialogue at Glasgow's Garnethill Synagogue Oct. 31, the evening of the opening day of the U.N. climate conference. (NCR/Brian Roewe)

In the evening of COP26's opening day, dozens of faith leaders gathered at Glasgow's Garnethill Synagogue to the tunes of bagpipes. Shahin Ashraf, head of global advocacy for Islamic Relief Worldwide, said the faith community has an obligation to represent in Glasgow those who could not come, from climate migrants in Pakistan to people in Bangladesh who live in constant fear of the next monsoon.

The moral dilemma, she said, is that while climate change exacerbates such extreme weather events, those in power have responded with inadequate actions. Asked what she hopes to see come out of COP26, she said specifically financing for developing countries and national climate pledges commensurate with the science, but more broadly a sense of solidarity and ambition from both negotiators and faith leaders.

"The time has come for all of us to show true leadership in our faith communities for an urgent plan of action. … This is the greatest political issue of our time," she said.

Related: 5 reasons why Catholics should care about the COP26 climate summit
Related: Catholic groups outline priorities ahead of Glasgow COP26 climate change summit
A version of this story appeared in the Nov 12-25, 2021 print issue under the headline: Faith groups press for climate action .