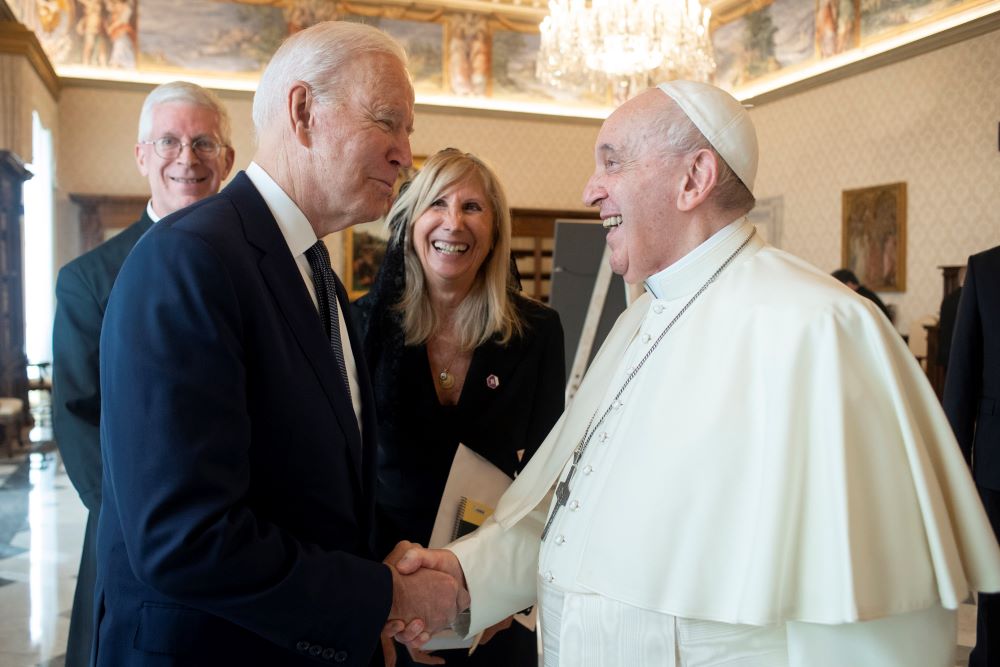 Editor's Note: This story has been updated to add comments.

President Joe Biden praised Pope Francis as "the most significant warrior for peace I've ever met" during a closely watched meeting at the Vatican Oct. 29.

The meeting between the two world leaders took place against a backdrop of deep divides in the American Catholic Church. The pope and the president met privately for more than 75 minutes, setting what is believed to be the longest meeting between Francis and any world leader.

Discussion of climate change topped the agenda of Biden's meeting with the pope and later discussions with Vatican Secretary of State Cardinal Pietro Parolin and Vatican Foreign Minister Archbishop Paul Gallagher, according to a Vatican communique.

Biden and Francis also discussed, according to the Vatican, the ongoing fight against the COVID-19 pandemic and the needs of migrants and refugees.

"Reference was also made to the protection of human rights, including freedom of religion and conscience," the Vatican stated, a potential reference to disagreements between the Holy See and the Biden administration on abortion rights and certain religious liberty cases.

The president's motorcade arrived in the Vatican's San Damaso Courtyard just a few moments before noon in Rome. Despite the tensions at home, Biden smiled and joked as he arrived at the Apostolic Palace with First Lady Jill Biden.

"It's good to be back," the president said as he greeted ushers. He later introduced himself as "Jill's husband."

Some conservative Catholics see both the president and the pope as threats to traditional Catholic orthodoxy because the president supports legal abortion and gay rights and Francis' prioritization of issues including climate change, poverty and the plight of migrants and refugees over issues of sexual morality.

A statement from the White House noted that the president praised the Vatican's efforts with Christian groups around the globe to work toward climate neutrality.

"President Biden thanked the Vatican for speaking out on behalf of the wrongfully detained, including in Venezuela and Cuba," the White House statement continued. "The leaders committed to continue using their voices to advocate for personal and religious freedoms world-wide."

Biden is in Rome for the Oct. 30-31 G20 summit, a major intergovernmental forum addressing global economic concerns. He then will travel to Glasgow, Scotland, for the U.N. COP26 meeting on climate change.

From Francis, Biden received a painted ceramic tile, a volume of papal documents, a copy of the pope's 2021 Message for Peace, the Document on Human Fraternity and a recently published book on Pope Francis' extraordinary urbi et orbi  service from an empty St. Peter's Square on March 27, 2020, as he prayed for an end to the COVID-19 pandemic.

The Vatican had planned to provide livestreamed footage of Biden's arrival in the palace's Throne Room and the initial greeting between the pope and the president. Those arrangements were abruptly canceled on Oct. 28, much to the dismay of White House and Vatican reporters.

Vatican officials cited the COVID-19 pandemic for denying external media access to the start and end of the meeting. Media typically is allowed at other papal events. Anyone entering Vatican property must show proof of vaccination or proof of a negative COVID test.

Video footage released by Vatican Media showed both the pope and president jovially engaging one another and smiling as Francis welcomed Biden into the papal library and where they eventually sat across from each other during their lengthy meeting. 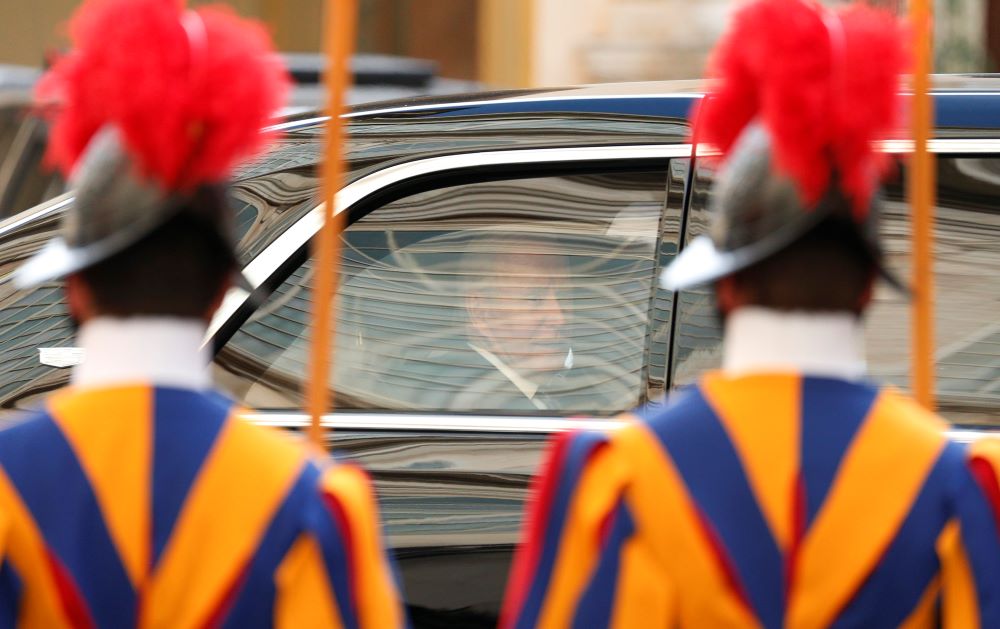 President Joe Biden looks out from the window of his limousine as he leaves the San Damaso Courtyard of the Apostolic Palace after meeting with Pope Francis at the Vatican Oct. 29, 2021. (CNS/Paul Haring)

Although both the official White House readout and the Vatican communique prioritized areas of commonality between the two leaders, Biden's 2020 election pushed many underlying U.S. Catholic divisions into public view.

Los Angeles Archbishop José Gomez, president of the U.S. bishops' conference, issued a nearly 1,200-word statement on Inauguration Day offering his prayers for Biden, but warning "our new President has pledged to pursue certain policies that would advance moral evils." The Vatican's response was much warmer, with Francis sending a telegram congratulating Biden and urging him to pursue policies "marked by authentic justice and freedom" in support of the common good.

High-ranking Vatican officials have cautioned against such an approach. Pope Francis, while repeatedly denouncing abortion and upholding longstanding church teaching on the matter, has said he has never denied Communion to anyone and warned against the politicization of the Eucharist.

Earlier Friday, Francis met with South Korean President Moon Jae-in, also a Roman Catholic, and on Saturday, Oct. 30, Pope Francis will meet with Indian Prime Minister Narendra Modi. That will mark the first meeting of the head of the 1.3 billion-member Catholic Church and the leader of India's 1.3 billion people, although the meeting between the president and the pope had dominated headlines around the globe.

Eric LeCompte, executive director of Jubilee USA Network, told NCR that the meeting between Biden and Francis is "critical" as it spotlights "the two most important and vocal leaders on changing global policies right before the G20."

"The most important decisions on climate change in our lifetimes will be made over the next five years at the G20 and at the International Monetary Fund," LeCompte explained. On behalf of Jubilee USA, an interfaith organization advocating for debt relief for developing countries, he praised the Biden administration saying that the United States "is now the leading government responding to the global climate crisis."

LeCompte said the Biden administration was the first to mandate that all government agencies' spending comply with its climate mitigation policies.

"No one else in the G20 has actually started to do that yet," he said, adding that he believes that Biden's meeting with the president offers a "united front" to push other presidents and prime ministers to follow suit.

Joan Rosenhauer, executive director of Jesuit Refugee Service/USA, said that she was "encouraged" that the issue of refugees appeared to be a priority for the leaders.

Citing Biden's Catholic faith, Rosenhauer said she knew the meeting with the pope means a great deal to Biden on a personal level, adding that she hopes it will "inspire the president to more fully welcome the stranger through U.S. policy."

"We were very happy that Mr. Biden fulfilled his promise to raise the maximum number of refugees admitted to the U.S. this year to 125,000 as he had promised, but the infrastructure and resources needed to resettle those refugees have been gutted in recent years and have to be rebuilt to achieve those numbers," she told NCR.

"This meeting was about a unified front from the most important global leaders responding to the pandemic from both a moral perspective and a policy perspective."

Just days after Biden was elected last November, he spoke at a Jesuit Refugee Service virtual gala where he promised his refugee policies would mark a stark contrast to that of President Donald Trump.

Yet Rosenhauer said she has serious concerns that the Biden administration has maintained many of Trump's policies at the southern border, effectively shutting down asylum in the United States.

"The policies at our southern border are not welcoming the stranger. They're not loving our neighbor," she lamented. "And so I really hope that President Biden was reminded of those teachings when he met with the pope."

While abortion debates in the United States had dominated much of the news coverage ahead of the meeting, Stephen Schneck, who recently stepped down as executive director of Franciscan Action Network and was a co-chair of Catholics for Biden during the 2020 election, said it is important that the two discuss the issue in the context of a range of issues important to Catholics.

"Given the likelihood of the Supreme Court hearing the matter, the challenges to the Hyde Amendment and new restrictions on abortion by several states, I think it would have been valuable for His Holiness to have reiterated the Church’s concerns to the President," Schneck told NCR.

Schneck said the fact that the two discussed issues related to the environment, migrants and poverty shows that the church is not focused solely on "one issue" — that of abortion — but also that "this one issue also cannot be bracketed from our mission in the world for creation, for those in poverty, the oppressed, marginalized and vulnerable among us."

LeCompte said it was no surprise that climate change, the pandemic and poverty relief took center stage.

"This meeting was about a unified front from the most important global leaders responding to the pandemic from both a moral perspective and a policy perspective," he said.