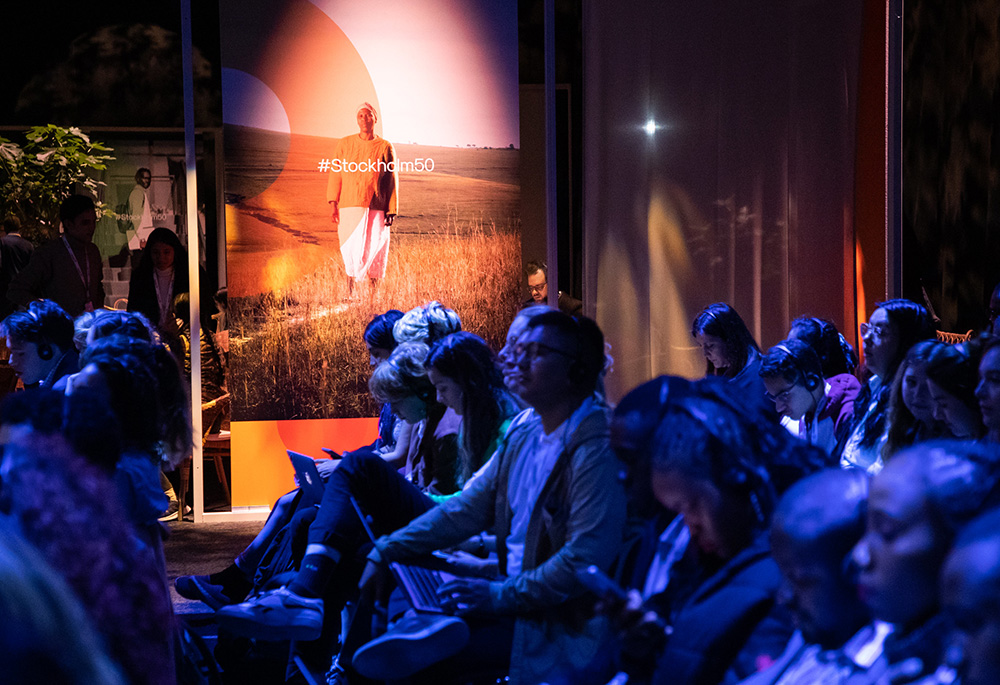 Ahead of a milestone international environmental conference, religious leaders have called for humanity to reverse course quickly from economic practices that abuse nature and heat the planet to dangerous levels, saying the faith voice has a pivotal role to play as "the world is facing a triple 'pandemic' of climate change, biodiversity loss and pollution."

"The root causes of the triple planetary crises are deeply fueled by structural greed and apathy that underpin our current economic systems. Amassing of obscene wealth by corporations and select individuals is directly related to global environmental problems and solutions, which is morally and ethically unacceptable," wrote nearly 200 leaders and representatives of world religions in an interfaith statement addressed to participants of Stockholm+50, the United Nations environmental conference that runs June 2–3.

"Without addressing these underlying causes, we are on a collision course to disaster," the statement read, adding, "We humans have failed in our responsibility as 'earth keepers' to protect the planet."

The interfaith statement also called for the U.N. to include faith leaders in environmental policy discussions, as some nations work to minimize religion's role, and urged widespread recognition of the human right to a clean, healthy and sustainable environment. It also committed religious communities to "practice what we preach," including through divestment from fossil fuels and reducing their own pollution, plastic waste and carbon footprints.

Stockholm+50 marks the 50th anniversary of the first world conference on the environment, held in Sweden's capital city in June 1972. That gathering came two years after the first Earth Day celebrations organized in the United States.

Roughly 120 countries attended the first global environmental conference, where they adopted the Stockholm Declaration on the human environment that outlined 26 principles for nations to cooperate in safeguarding the planet, ecosystems and natural resources for present and future generations. The declaration connected moral and spiritual growth with living in greater harmony with nature. 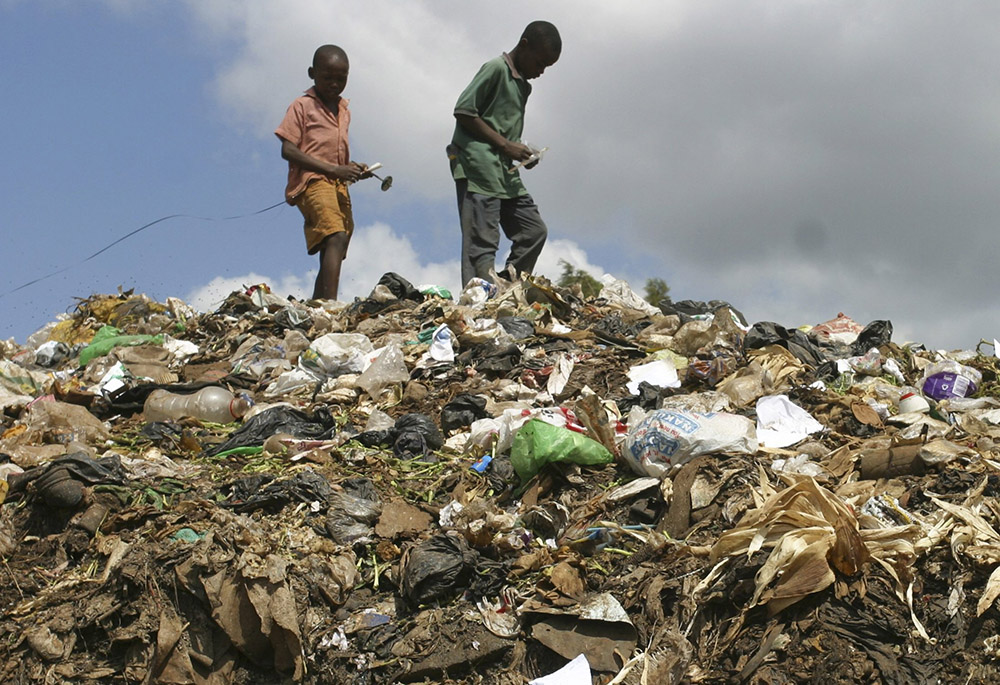 Children from a slum area scavenge through a garbage dump in Nairobi, Kenya, in late February 2009. (CNS/Reuters/Noor Khamis)

"A point has been reached in history when we must shape our actions throughout the world with a more prudent care for their environmental consequences," the declaration said.

The original Stockholm conference also led to the formation of the United Nations Environment Program, or UNEP, later that year, the designation of June 5 as World Environment Day and was a precursor to the founding of the U.N. Intergovernmental Panel on Climate Change and the series of U.N.-hosted COP summits on climate change and biodiversity, as well as the establishment of the 17 sustainable development goals.

UNEP's Faith for Earth Initiative, formed in 2017 and based in Nairobi, Kenya, helped organize the interfaith statement ahead of Stockholm+50 as a way for faith-based organizations to engage the conference proceedings and to recognize the critical role communities of faith across the globe play in bringing about a more environmentally sustainable planet.

While the '72 Stockholm Declaration referenced the spiritual relationship between humans and the environment, that angle has been largely absent in the ensuing 50 years, Iyad Abumoghli, Faith for Earth director, told EarthBeat.

"The interfaith community is rectifying the situation and making an interfaith statement that shows how committed they are, and how powerful they can be, in supporting the global international community in their efforts to rectify in general the relationship between humans and the environment," he said.

Servite Friar Fr. John Pawlikowski, professor emeritus of social ethics at Catholic Theological Union and a member of the climate change task force of the Parliament of the World's Religions, told EarthBeat the interfaith statement "represents a reassertion" by the world's religious communities of their critical role in confronting climate change, and counters efforts to mitigate their influence.

"They have the ability, and I would even say the power, to reach a wide body of people that almost no other social institution today has," he said.

Mary Evelyn Tucker, co-founder of the Yale Forum on Religion and Ecology, in an email called the Stockholm+50 conference "an important milestone in the environmental movement," which has become "far more diverse" in the past five decades in terms of people involved and areas of focus.

She added that "the Interreligious Statement represents the growing moral force that is now present in seeking broader ecojustice solutions to our pressing global challenges."

The statement is the second time the world's religions have initiated a major interfaith declaration on environmental issues this year, following another issued during the U.N. Environment Assembly in March. A third collaboration, in October, came when roughly 40 heads of religions joined Pope Francis at the Vatican in issuing an unprecedented joint appeal ahead of the COP26 climate summit, where they called for "urgent, radical and responsible action" to curb emissions and limit "the grave threat" posed by climate change. 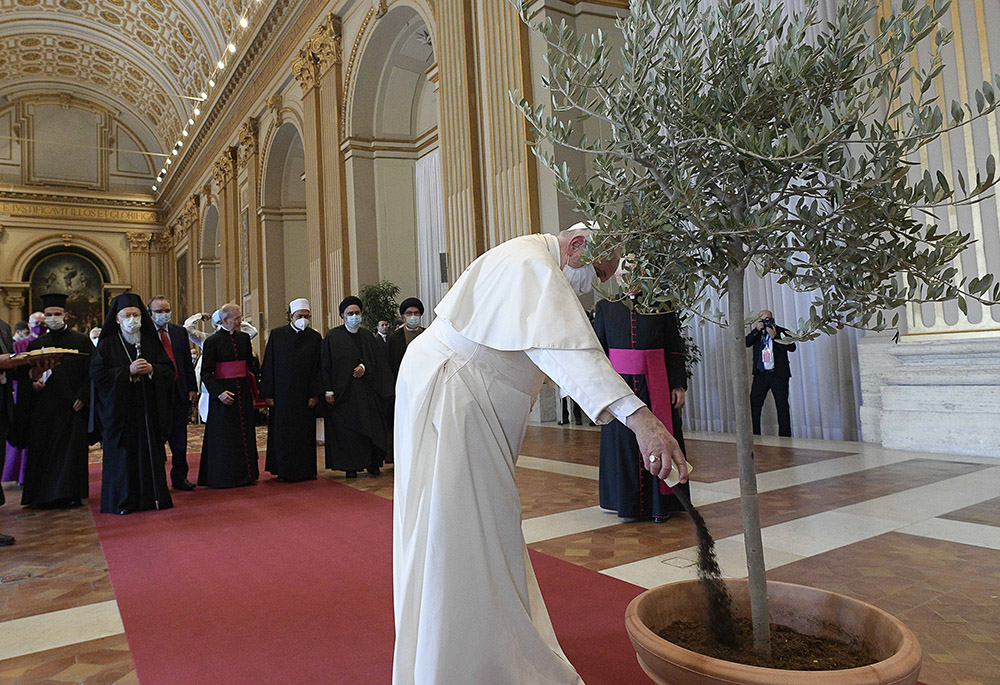 Pope Francis pours dirt into a potted olive tree during the meeting, "Faith and Science: Towards COP26," with religious leaders in the Hall of Benedictions at the Vatican Oct. 4, 2021. The meeting was part of the run-up to the U.N. Climate Change Conference, called COP26, in Glasgow, Scotland, Oct. 31 to Nov. 12, 2021. (CNS/Vatican Media)

The Stockholm+50 interfaith statement drew support from more than a dozen religions, including Islam, Judaism, Buddhism, Hinduism and multiple denominations of Christianity, such as the Lutheran World Foundation.

Among the signers, hailing from 40 countries, were School Sister of Notre Dame Ann Scholz, associate director of social mission for the U.S.-based Leadership Conference of Women Religious; Jesuit Fr. Xavier Jeyaraj, secretary of the social justice and ecology secretariat of the general curia for the Society of Jesus; Rev. Stephen Avino, executive director of the Parliament of the World’s Religions; Joy Kennedy, moderator of the World Council of Churches' working group on climate change; Rabbi Yonatan Neril, founder and executive director of The Interfaith Center for Sustainable Development, in Jerusalem; and Imam Saffet Abid Catovic, head of the Islamic Society of North America.

"At its root, the sustainability crisis is a spiritual crisis," Neril said in an email. He added that "only spirituality and religious institutions can help humanity to turn the tide on consumer society" and the greed and short-term thinking he said are at the root of the trio of environmental crises identified in the interfatih statement.

In the statement, faith leaders urge the U.N. Environment Assembly to adopt a resolution providing a platform for faith leaders to engage in policy discussions. They wrote that faith and Indigenous leaders "have the potential to play an essential role in shaping global environmental governance and policy making," in part due to roughly 84% of the world's 7.9 billion people belonging to a religion or holding spiritual beliefs.

"The traditions that we represent have unique capacities to convince, convene and contribute meaningful, moral, economic, spiritual and social substance to public deliberations," they stated.

Such a resolution would elevate faith-based organizations within U.N. structures and make the Faith for Earth Initiative a more permanent program. Currently, the U.N. recognizes nine stakeholder sectors on sustainable development, among them business and industry, women, children, Indigenous peoples and nongovernmental organizations, which includes faith groups.

Raising the faith community's status would allow them a greater voice in international decision-making on environmental issues and make engagement with individual nations easier, Abumoghli said.

"They see that they need to play a major role and be recognized as an important sector, not only to be able to submit statements but to bring a specific perspective of religions and faith and values into policymaking," he told EarthBeat.

The call for greater engagement of faith communities was one of 10 actions the religious leaders asked for governments and the U.N. to adopt. They also urged the widespread implementation of the human right to a clean, healthy and sustainable environment, which they said is a pathway to eradicating poverty and promoting greater gender equality and inclusivity. Other asks involved respecting the rights of nature, adopting laws on "ecocide," amplifying women's voices and that nations "adopt a new development paradigm that integrates moral, spiritual and indigenous shared values."

The faith leaders said such actions were especially critical in the next few years, as climate scientists have said global greenhouse gas emissions need to peak no later than 2025, and halved by 2030, in order to keep in range the Paris Agreement target to limit average global temperature rise to 1.5 degrees Celsius. Already, the world has heated an average of 1.1 C since the late 1800s.

In their statement, the faith leaders together stated that climate change most impacts poor and marginalized people, especially women, children, the elderly, people with disabilities and Indigenous communities. They noted that some rainforests, such as parts of the Amazon, have transformed from absorbers to emitters of carbon emissions, and melting permafrost is releasing large levels of methane. Meanwhile, heat waves, droughts and floods are devastating communities around the globe, while war and conflict ramp up competition for fossil fuel exploration.

"We need to change our relationship and learn to co-exist in a harmonious and symbiotic manner with earth and its ecosystems," the faith leaders wrote. 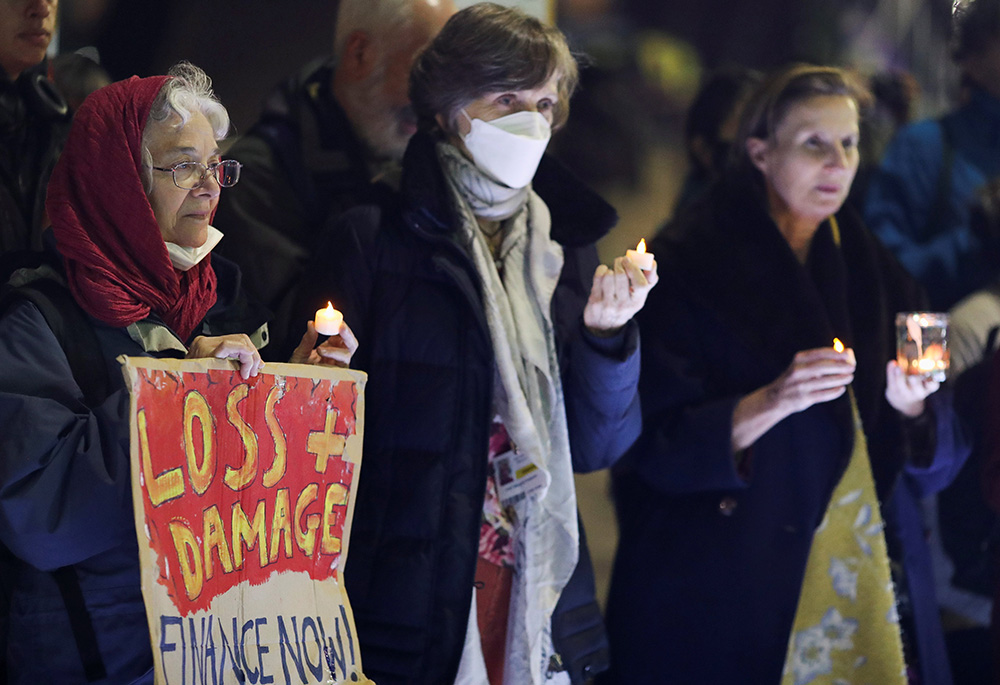 People hold candles as they take part in a vigil outside the U.N. Climate Change Conference in Glasgow, Scotland, Nov. 10, 2021. (CNS/Reuters/Russell Cheyne)

That, they said, begins with shifting from a neoliberal, anthropocentric worldview to a more interconnected one, and swiftly instituting a just transition from a fossil fuel-based economy toward clean energy. As part of that transition, they added it was important to raise concerns about carbon offset programs and nature-based solutions that threaten the land and local people.

Within their own communities, the faith leaders pledged to live in greater harmony with nature "through our daily actions, how we invest, how we manage assets" and in engaging their congregations. They committed to divesting from fossil fuels and calling for an immediate halt to new exploration — a requirement to meet the 1.5 C temperature target, according to the International Energy Agency — and to reduce pollution, especially plastic waste, in public events, to amplify voices of Indigenous, elderly, women and youth, and to strengthen the connections between climate change and human rights.

Dozens of faith-based events will take place during Stockholm+50, covering topics such as climate, biodiversity, mindfulness and economics.

The UNEP Faith for Earth Initiative will host an official side event on June 2. And FaithInvest, in partnership with the Italy-based Focolare Movement and Brahma Kumaris, will lead a webinar June 3 on its FaithPlans program to support religious organizations to wield their assets and investments to better safeguard the planet.

Scholz said in an email that while there is much progress on environmental issues to celebrate at the 50-year anniversary of the Stockholm Declaration, it hasn't been nearly enough. What's needed now, she said, "is nothing less than a personal and communal conversion of heart" to transform institutions and relationships with our world.

"We don’t have another 50 years to tinker around the edges. It is up to us, perhaps particularly to people of faith, to focus policy makers squarely on the need for the integral ecology about which Pope Francis speaks so eloquently in his twin encyclicals, Laudato Si' and Fratelli Tutti," she said.

Related: World religions, UN unite for book on faith and action for the Earth