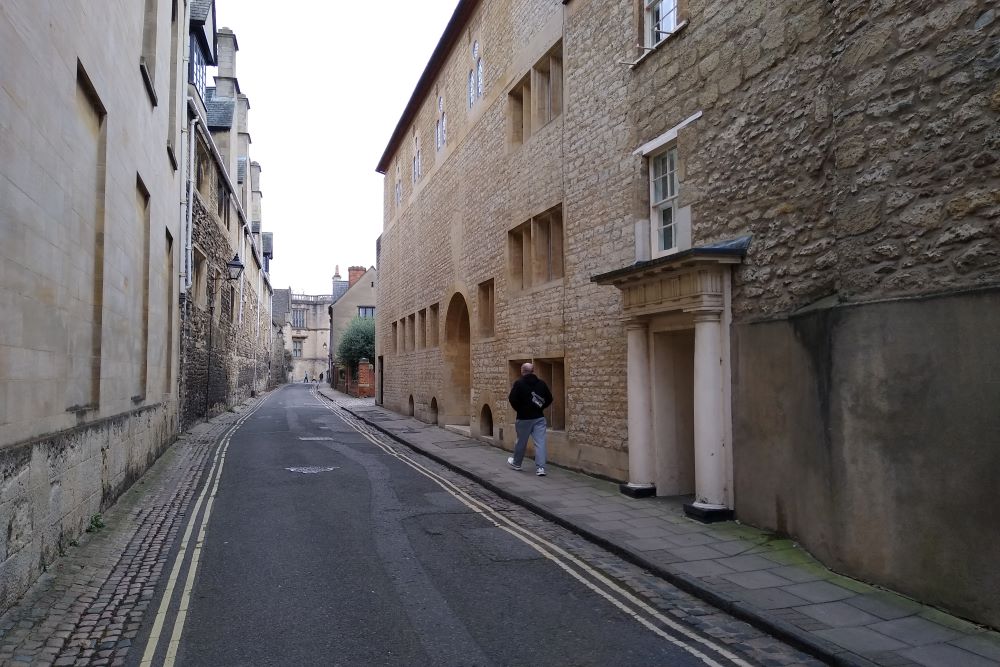 The Laudato Si' Research Institute is housed at Campion Hall, University of Oxford. The institute's mission is to apply the principles of Pope Francis' encyclical to empower people working to address the world's most pressing environmental and social issues. (Jonathan Luxmoore)

In the historic heart of this university city, downhill from the stately Christ Church College, an L-shaped, 18th-century building stands on a narrow medieval lane once occupied by butchers and brewers.

Today, the site is home to the Jesuit-run Campion Hall at England's prestigious University of Oxford, and a burgeoning institute named for a papal encyclical that seeks to utilize its research prowess to empower those working for global eco-societal change.

Since the Laudato Si' Research Institute was set up in 2019, it has been on a mission to reconcile intellectual insight with the wisdom from religious traditions to produce multidisciplinary research capable of transforming society around the most pressing ecological and social issues facing the world, such as climate change, biodiversity loss, land use, inequality and the post-COVID-19 world. 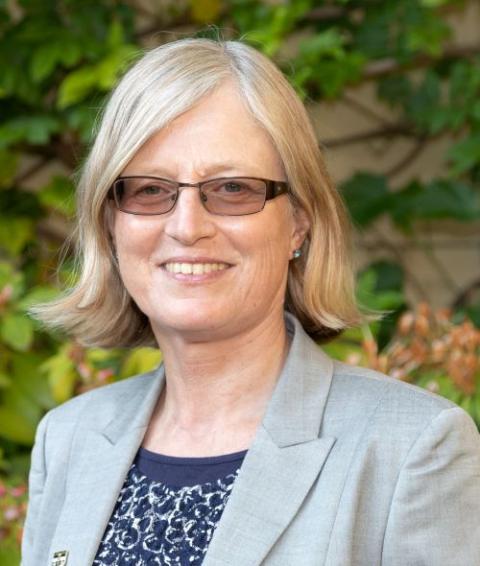 Just three years on, acting in the spirit of Pope Francis' 2015 social encyclical "Laudato Si', On Care for our Common Home," the Laudato Si' Research Institute is already having an impact.

"Though socially grounded, the Jesuit tradition also has an intellectual dimension, and one of our main aims is to develop this towards a reordering of society," director Celia Deane-Drummond said.

Faith and science in dialogue

The Laudato Si' Research Institute is housed at Campion Hall, named after the Oxford Jesuit martyr, St. Edmund Campion (1540-1581), and the oldest of Oxford University's six Christian "permanent private halls." Campion Hall was relocated in the 1930s to its current Brewer Street site, which was designed by renowned architect Edwin Lutyens.

Donors have included novelist Evelyn Waugh and the John Templeton Foundation, while the hall boasts a religious art collection dating back six centuries, as well as a distinguished list of clerical alumni.

The latest of Campion Hall's age-old Catholic commitments, the Laudato Si' Research Institute has set out to amass a wealth of academic and religious resources to inform and guide its research, as well as the work of its partners in academics, the church and beyond. At the center of its research are the concerns of the world's most vulnerable communities, and the pursuit of economic and policy transformation that can cultivate a greater "eco-social responsibility" toward the planet, what Francis has called "our common home."

Practical efforts are now underway to give substance and direction to this ambitious program.

A quote from the encyclical on the Laudato Si' Research Institute website outlines the guiding vision for its work: "If we are truly concerned to develop an ecology capable of remedying the damage we have done, no branch of the sciences and no form of wisdom can be left out, and that includes religion and the language particular to it."

"We're not a church propaganda machine — we're academics," Deane-Drummond said of the new institute. "But our work has a policy dimension: We're seeking partnerships and talking to those involved in practical activities."

The biological scientist and systematic theologian spoke to EarthBeat as reverberations continued from COP 26, the United Nations climate change conference in Glasgow, Scotland, that ended in mid-November amid mixed emotions after nations agreed to new measures to promote net-zero economies but fell short on other targets.

Though cautious about her institute's involvement in activist campaigns, Deane-Drummond concedes that the "most dynamic energy" at the Glasgow summit came from civil society groups, rather than official negotiators. It's in the interface between theory and practice that the new Laudato Si' Research Institute seeks its place.

"There's clearly been a thawing of attitudes towards the marginalized and vulnerable, in recognition that they need to be heard — and religious organizations are now providing a strong voice for them," Deane-Drummond told EarthBeat.

"The pope's encyclical has provided inspiration by laying out a vision of integral ecology" — the idea that humans are part of an interconnected, created world and environmental challenges involve both social and ecological issues that require multidimensional solutions — "which is open to the world," she added. "Though our work is still in its infancy, we're trying to reflect this by integrating different scientific disciplines and faith traditions and drawing them into dialogue."

'There's clearly been a thawing of attitudes towards the marginalized and vulnerable, in recognition that they need to be heard — and religious organizations are now providing a strong voice for them.'
—Celia Deane-Drummond

In addition to Francis' encyclical, the Laudato Si' Research Institute is guided by the Jesuits' four universal apostolic preferences, including "caring for the common home," that the Society of Jesus adopted in the months before the institute was formed.

Currently, the Laudato Si' Research Institute and its eight-member staff are building a library of integral ecology texts for use by researchers, as well as an ecumenical and interdisciplinary Integral Ecology Open Access Book Collection for students, activists, church leaders and the wider public, focusing on "the intersection between theory and praxis," according to its website. The open access collection is set to launch Feb. 3.

Since its formation, the institute has each academic year established a theme to guide its work. That's included gratitude and women and ecology, hosting its first international conference on the latter subject in June. Its research theme for the 2021-22 academic year will focus on contestations in land and agriculture. Later this month, the institute will host an online lecture on theological and philosophical perspectives on the COVID-19 pandemic.

In addition, the Oxford-based institute has begun work in creating a Global Laudato Si' Research Network to facilitate connections among academic centers and researchers across countries and disciplines, with a special emphasis on collaborations between the Global North and Global South and uplifting voices from the periphery. Another goal is to connect researchers with the people and organizations engaged in addressing socio-ecological challenges in their communities, the institute says, in order to "contribute to efforts that address the root causes of our ecological crisis and to have an impact on the lives of people and the planet."

Already, the Laudato Si' Research Institute has formed other links, including with the Vatican Dicastery for Promoting Integral Human Development and with its new Laudato Si' Action Platform, which seeks to mobilize Catholic groups worldwide to live out an integral ecology-inspired approach to sustainability.

Contacts are also underway with the Ecclesial Networks Alliance for Integral Ecology, a major initiative linking churches in the global south, via the institute's Mexican-born affiliate scholar, Mauricio López Oropeza. López is a member of the Vatican dicastery and executive secretary of the Ecclesial Conference of the Amazon (CEAMA) who played a key role at the 2019 Amazon synod.

Related: What is ecological sin?

Meanwhile, other partnerships have formed with two Brussels-based groups: the Jesuit European Social Centre, and CIDSE, a grouping 18 Catholic agencies from Europe and North America, which commissioned a report from the Laudato Si' Research Institute in March on biodiversity loss and ecological conversion.

Titled "The Wailing of God's Creatures," the report warned that biodiversity decline, fueled by unequal consumption and unsustainable lifestyles, now risked the "sixth mass extinction" of wildlife, and urged immediate counteraction from scientists, policymakers and the Catholic Church.

Making its mark in England

Institute staffers are teaching courses at the university's theology, anthropology, business and geography facilities, while its much-published international development director, Séverine Deneulin, is also an associate fellow at Oxford's Department of International Development.

Having a papal encyclical as part of its title can create a barrier, especially with lecturers and professors with little if any knowledge of Catholic teaching.

But Deane-Drummond's distinguished academic background, teaching science and theology at universities in Britain and the United States, including the University of Notre Dame, has proved an asset, as have her books on ecology, genetics, bioethics, evolution and eco-theology.

"Oxford works through contacts, and these take time to cultivate — people want to know you're intellectually respectable rather than just swayed by your religious beliefs," Deane-Drummond told EarthBeat.

"There's sometimes an initial reserve, a suspicion you may be spreading propaganda. But this can be overcome through conversation, and there's generally an openness to dialogue with anyone working in areas such as poverty, marginalization and ecology, and pursuing transdisciplinary collaboration."

While ready to criticize some aspects of Catholic social teaching, such as on the role of women in development, Deane-Drummond is pleased with the support shown so far by Britain's own Catholic Church.

She herself serves as an environmental adviser to the Bishops' Conference of England and Wales, and sees it as part of the Laudato Si' Research Institute's mission to encourage engagement by church organizations.

Related: Faith groups can 'really make a difference' at COP26 and beyond, leaders say

Institute staffers have worked closely with CAFOD, the London-based Catholic Fund for Overseas Development, and have also acted as co-organizers of "Guardians of Creation," a two-year research project launched by the Diocese of Salford to spearhead Catholic efforts to encourage energy efficiency and pave the way for a sustainable, carbon-neutral future.

The project's research team, headed by Edward de Quay, the institute's carbon transition officer, is working with parishes, schools, religious communities and industrial groups nationwide to develop carbon accounting and environmental management tools, in response to what Francis has described as the "cry of the earth and the cry of the poor."

In November, the Guardians project issued new guidance for Britain's Catholic Church on accounting methods for net-zero carbon, two months after an LSRI report, titled "Caring for our Common Home in the Church and Beyond," set out the theological foundations for a comprehensive church decarbonization strategy.

While the Laudato Si' Research Institute lists "economic/policy transformation" and "scientific and technological innovation" among its priorities, Deane-Drummond stresses its mission is to offer "intellectual resources" rather than engage in practical action.

Although its website talks of promoting "alternative epistemologies'' that elevate different "ethical and philosophical frameworks and narratives for eco-social action," she's also scathing about the lack of "significant, concrete policy changes" at COP26 in Glasgow.

Hopes will now be pinned, she thinks, on the U.N. biodiversity conference, rescheduled for April 25-May 8 in Kunming, China. A key task there will be to overcome any latent tension between biodiversity and climate, and bring them together in line with the overriding principle of integral ecology.

And it's one in which the voice of the Catholic Church — powerful, articulate, convincing and ever-present — will be central, backed by increasingly influential new actors like Oxford's Laudato Si' Research Institute.

"Of course, we're not suggesting Catholics are the only people worth talking to — we want to partner with people of all faiths and none in confronting these intractable problems," Deane-Drummond told EarthBeat. "Given the hostility shown to Pope Francis in some quarters, there'll always be tensions and difficulties within the church itself. But culture and religion are closely interwoven, and governments have to take this into account."

"Our voice simply cannot be ignored now, as we work to change culture and society at local and global level," she said.

A version of this story appeared in the Feb 4-17, 2022 print issue under the headline: Laudato Si' institute's mission is a better world.