by Gina McCarthy
Leaders
This article appears in the Laudato Si' at Five feature series. View the full series.

After Pope Francis released his Laudato Si' encyclical on the environment five years ago, I joined thousands of Americans on the White House lawn to witness our Holy Father say, "The environmental challenge we are undergoing — and its human roots — concern and affect us all … As Christians inspired by this certainty, we wish to commit ourselves to the conscious and responsible care of our common home."

It was an incredible honor to be there — not only as a product of Catholic schools but also as someone who has spent her entire life fighting to protect our kids and the most vulnerable among us from pollution. His Holiness reminded us that fighting climate change isn't just about polar bears — it's about people. It's about our moral obligation to protect our children, our grandchildren, and the most vulnerable among us from the most significant public health challenge of our time.

I sat politely glued to my seat, just as the nuns had taught me, and I quickly became engrossed in his words. They left me inspired, energized, hopeful and recommitted to a healthier, safer, sustainable future. And now during these troubled times, I find myself coming back to that moment as I stay indoors or venture outdoors for a short walk with my mask on, careful not to walk too close to my neighbors. 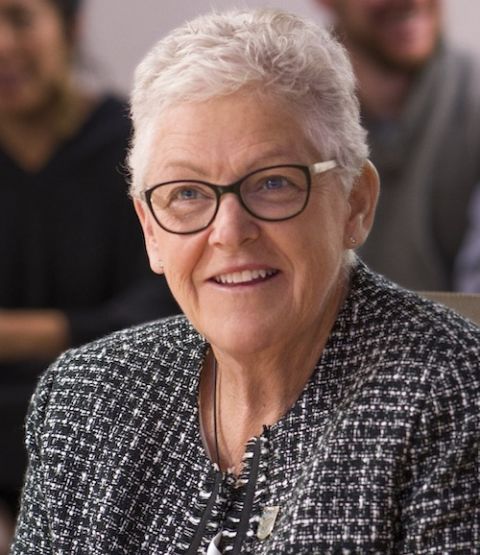 Like the climate crisis, the coronavirus threatens every single one of us — but not equally. It goes after people of color and those who live in low-income communities because they already suffer from disproportionately high rates of lung and heart ailments, and those preconditions weaken their ability to survive COVID-19. Already, scientists are documenting significantly higher death rates for those who bear the burden of living along highways and near refineries and other industries where pollution is so high that the air is unhealthy to breathe.

The pope reminded us that it's our responsibility to care for our "common home." Protecting the natural resources we depend on is a moral obligation the Holy Father wanted us to acknowledge and act on. It is a fundamental obligation recognized by religions everywhere, and the pope was reminding us of our individual responsibility to our friends, our family, our neighbors — and our collective obligation to embrace this challenge together.

As we celebrate the fifth anniversary of the pope's encyclical, it is my hope that faith and religious organizations will use this day as a time to remind their congregations and all of those in a position of leadership in the public and private sectors of their obligation to put people — not polluters or profits — at the forefront of every decision they make. And I would hope that the day could be a chance to remind all of us that we cannot take our world for granted. We must speak up, stand up and act up if we hope to protect the people we love and the places we live. We must demand our right to clean air, safe drinking water and healthy, safe places to live, work and play.

After all, isn't it time for us to be thoughtful stewards of our precious natural resources? Shouldn't we start by heeding the cries of our children? They are asking us to save their future by embracing science and facts, implementing and enforcing our rule of law, and developing and delivering an action plan that will finally allow us to stare down the existential threat of climate change. What's stopping us from envisioning and investing in a better future, one that won't be built on the backs of the most vulnerable but instead provides the most vulnerable with the kind of immediate benefits they deserve?

Rebuilding our economy following this pandemic provides us the biggest opportunity we have ever had to deliver a future that is worthy of our country's values, supportive of our collective aspirations and dreams, and protective our children's health and our natural resources. We can begin to capture that opportunity by investing stimulus dollars in ways that reject our fossil fuel past and instead build a clean energy economy as the foundation for a cleaner, healthier, safer, and more just and sustainable future — and one where we all win. Isn't that what Pope Francis was hoping to see happen?

I have a picture on my wall at home that was taken in the White House during the pope's visit. It shows President Obama introducing me to Pope Francis, who is holding my hand while my knees were shaking. And I often think about how great it would be if my mother was alive to see this picture. She would be amazed and, if truth be told, so am I. That picture is a constant reminder to me that I cannot relent in the fight against climate change, and I am standing in pretty good company. 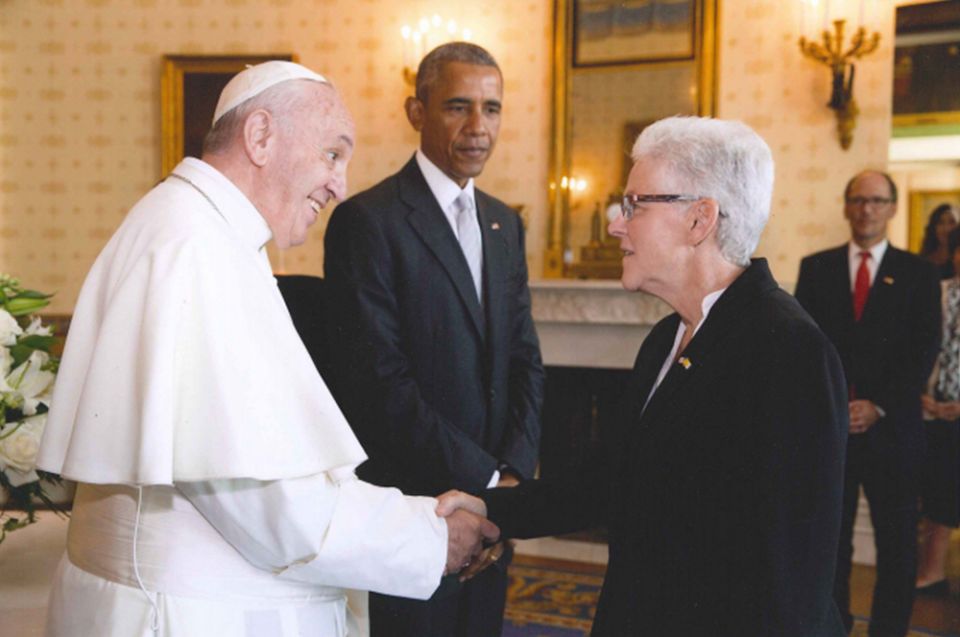 Pope Francis greets Gina McCarthy, then administrator of the Environmental Protection Agency, at the White House, Sept. 23, 2015, as President Barack Obama looks on. Obama appointed McCarthy as assistant administrator for the EPA's Office of Air and Radiation in 2009. (Courtesy of Barack Obama Presidential Library)

[Gina McCarthy served as administrator of the Environmental Protection Agency from July 2013 to January 2017 and became president and CEO of the Natural Resources Defense Council (NRDC) in January 2020.]

EarthBeat | Laudato Si' anniversary an opportunity to speak up, stand up, act up