by Junno Arocho Esteves, Catholic News Service
This article appears in the Synod for the Amazon feature series. View the full series. 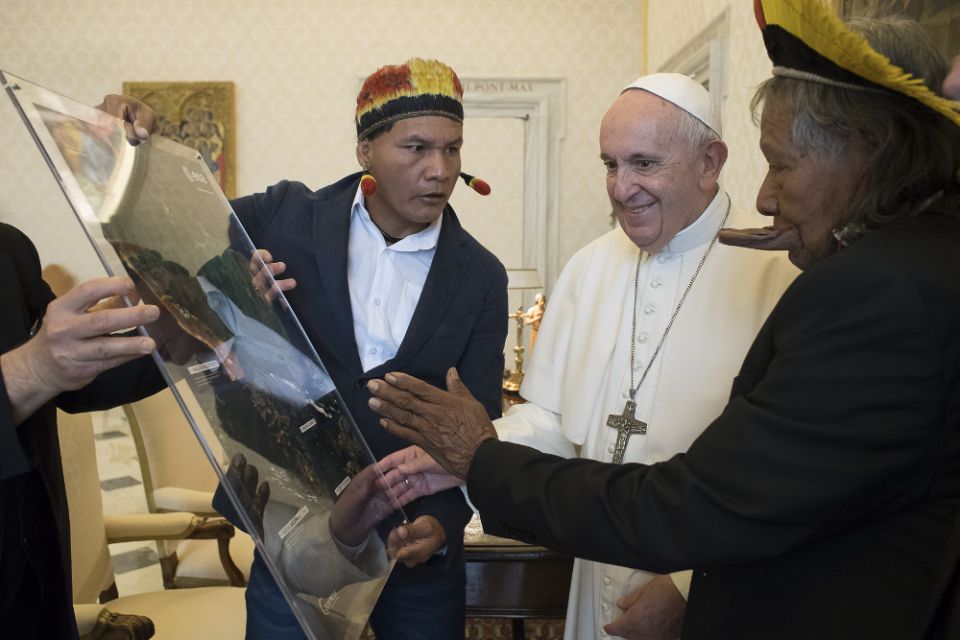 Raoni Metuktire, chief of the Kayapo indigenous group in the Brazilian Amazon region, right, shows Pope Francis a map of the Amazon rainforest during a private audience at the Vatican May 27, 2019. The indigenous chief met with the pope to discuss the Synod of Bishops on the Amazon, which will be at the Vatican in October. (CNS/Vatican Media)

Vatican City — If the world is to win the fight against climate change, its leaders must stop profiting from fossil fuels that threaten the survival and well-being of the planet and its inhabitants, Pope Francis said.

Addressing a Vatican climate change conference for finance ministers from around the world May 27, the pope said that the current crisis is "caused by a confusion of our moral ledger with our financial ledger."

"We live at a time when profits and losses seem to be more highly valued than lives and deaths, and when a company's net worth is given precedence over the infinite worth of our human family," he said.

The conference, "Climate Change and New Evidence from Science, Engineering and Policy," was sponsored by the Pontifical Academy of Sciences. Among the issues discussed during the event was the fulfillment of the U.N. Sustainable Development Goals, a list of 17 major commitments that the world's nations and U.N. agencies will be asked to pursue until 2030.

The pope gave his address after a private meeting with Raoni Metuktire, chief of the Kayapo indigenous group in the Brazilian Amazon region, to discuss the Synod of Bishops on the Amazon, which will be at the Vatican in October.

"This meeting attests to Pope Francis' care for the Amazonian people and environment, as well as to his commitment to safeguard our common home," said Alessandro Gisotti, Vatican interim spokesman.

The climate change conference featured reports from climatologists and experts on the dangerous effects of greenhouse gas emissions on the environment.

Despite the commitment by world leaders to meet the U.N. goals, the pope lamented that an increase in investments in fossil fuels and a decrease in clean energy investments indicate that "the signs today are not good."

"We continue along old paths because we are trapped by our faulty accounting and by the corruption of vested interests," he said. "We still reckon as profit that which threatens our very survival."

Pope Francis said the "effects of global inaction are startling" and cited recent extreme global meteorological events, such as heat waves, droughts, fires and floods, as "a dire premonition of much worse things to come, unless we act and act urgently."

"It is my prayerful hope that, as stewards of the world's finances, you will agree upon a common plan that accords with climate science, the latest in clean energy engineering and, above all, the ethics of human dignity," he told the finance ministers.

Days earlier in a message to the scientific community, Cardinal Peter Turkson said it may be time for an intervention "regarding the current climate crisis, caused by man's interference in nature," and called on others to join with scientists and young people in demanding political and economic leaders "to undertake drastic measures to change course."

"It is time to organize an intervention. As stated in Laudato si', 'the effects of the present imbalance can only be reduced by our decisive action, here and now' (LS 161)," he wrote. "We will all have to make a radical change in our lifestyle: the use of energy, consumption, transport, industrial production, construction, agriculture, etc. Each of us is called to act. But we must also take action together, starting with governments and institutions, families and people: we need all hands on deck."

Turkson, the prefect of the Dicastery for Promoting Integral Human Development, delivered the message on May 24 — the fourth anniversary of the publication date of Pope Francis' encyclical "Laudato Si', on Care for Our Common Home." The encyclical was publicly released on June 18, 2015.

Turkson said that the encyclical was written with the intent to contribute to the United Nations climate summit later that year in Paris, COP 21. At that gathering, 195 countries adopted the Paris Agreement, which set goals for all nations to reduce greenhouse gas emissions to limit average global temperature rise "well below" 2 degrees Celsius and "intensify efforts" to hold global warming to 1.5 C.

In October, the U.N. Intergovernmental Panel on Climate Change reported that the planet is on pace to reach that level of warming as early as 2030, and to hold temperatures at 1.5 C would require a rapid and widespread transformation of society to substantially cut carbon emissions nearly in half in the next decade and achieving net-zero emissions by mid-century.

Turkson called the 1.5 degree target a "critical physical threshold, inasmuch as it would still enable the avoidance of many destructive impacts of climate changes caused by man, such as the regression of the main glaciers and the destruction of the majority of tropical coral reefs."

"We are already witnessing the grave impact of climate changes on people, in terms of extreme meteorological conditions, such as drought, flooding, rising sea level, devastating storms and ferocious fires. The climate crisis is reaching unprecedented proportions. Therefore, the urgency could not be greater," he said.

But more than a physical threat, the cardinal called the 1.5-degrees target both "a moral threshold," due to the disproportionate impact climate change has on poor and vulnerable communities, and "a religious threshold" by destroying the Earth, God's gift to humanity.

"The 1.5°C threshold is also a moral threshold: it is the last chance to save all those countries and many millions of vulnerable people who live in coastal regions. It is the poor who pay the highest price of climate changes," Turkson said.

The cardinal said that the alarm that scientists have sounded has been supported by younger generations, specifically mentioning the recent youth climate strikes and the newly formed Laudato Si' Generation of young Catholics taking on climate change.

"Their frustration and anger towards our generation is clear. We risk robbing them of their future, as well as 'leaving to coming generations debris, desolation and filth,' " he said, citing a passage from Laudato Si'.

Turkson said hope remains to avoid the worst impacts of effects of climate change, and urged leaders at COP 25, in Santiago, Chile, to produce bold plans for implementing the Paris Agreement. He compared the level of mobilization and quick action needed to address climate change to the steps taken to save banks during the Great Recession of the late 2000s.

"Is it not possible to do it again now to save our common home, the future of our children and future generations?" he asked.