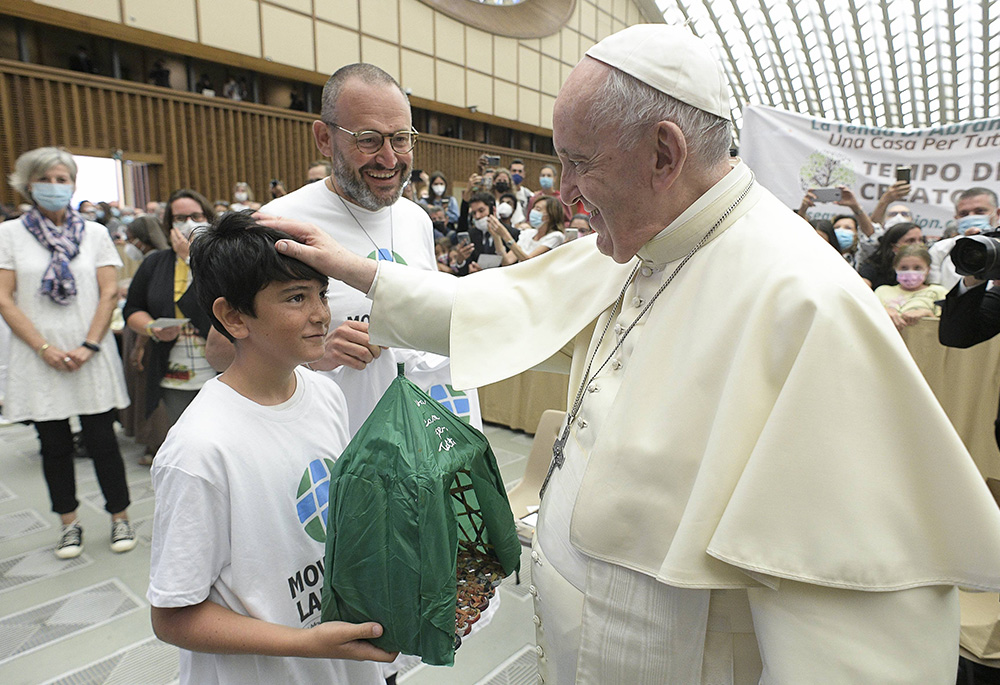 Pope Francis accepts the gift of a handmade "Abraham's tent" from a boy during his general audience in the Paul VI hall at the Vatican Sept. 1, 2021. The gift was given by members of the Laudato Si' Movement. (CNS/Vatican Media)

The Vatican is placing its flagship sustainability push, the Laudato Si' Action Platform, front and center during Laudato Si' Week 2022, with the hope that a week highlighting the multiyear initiative will inspire more Catholics and church institutions to sign up.

Running May 22–29, the now-annual Laudato Si' Week will feature eight days of events and actions marking the seventh anniversary of Pope Francis' landmark 2015 encyclical on ecology, "Laudato Si', on Care for Our Common Home."

An official Laudato Si' Week program, hosted by the Vatican Dicastery for Promoting Integral Human Development, will feature nine events situated across the globe mixing both virtual and in-person encounters, in the latter's case for the first time since the COVID-19 pandemic was declared in March 2020.

Along with the official schedule, organizers anticipate hundreds more ancillary celebrations across the globe. Carrying the theme "Listening and Journeying Together," the week is expected to feature a world ecological tour of liturgies, actions and discussions, from Manila to Brazil to Assisi, and will also offer a sneak peek at a forthcoming Laudato Si' documentary. 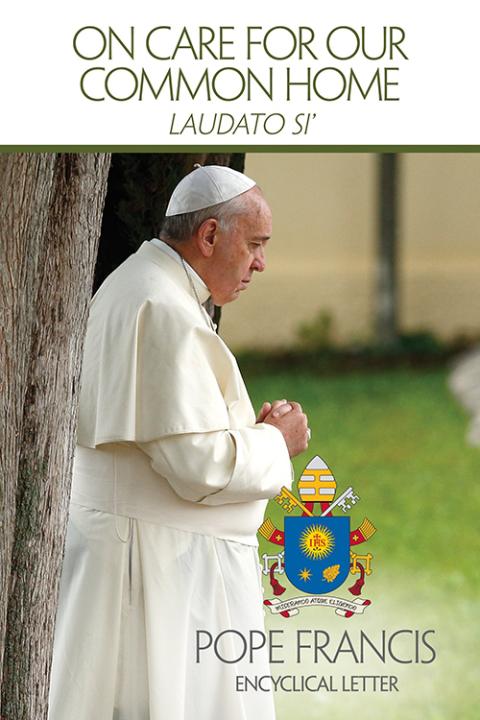 The cover of the English edition of Pope Francis' encyclical on the environment, "Laudato Si', on Care for Our Common Home." (CNS/Courtesy of U.S. Conference of Catholic Bishops)

Francis is expected to kick off the week during his Sunday Angelus prayer on May 22 in St. Peter's Square at the Vatican.

Laudato Si' Week, now held for the fourth time, marks the anniversary of the date (May 24) that Francis signed the encyclical, or papal letter, the first such solo effort of his papacy and the first from any pope focused primarily on matters of ecology. Since the fifth anniversary in 2020, Laudato Si' Week has been sponsored by the integral human development dicastery and supported by numerous Catholic organizations, including the Laudato Si' Movement.

In that time, the Vatican has sought to use the encyclical anniversary as a means to spark action within the Catholic Church to live out the messages and teachings Francis conveyed in Laudato Si', motivated in part by the timeline scientists say is necessary to mitigate climate change and avoid its worst impacts.

During the 2020 celebration, the dicastery first announced plans for the Laudato Si' Action Platform, an ambitious grassroots initiative inviting all facets of the Catholic Church to take up seven-year journeys toward total sustainability by completing a series of actions in the spirit of integral ecology. A year later, Francis personally invited Catholics to join the platform and a multi-year journey "to create the future we want: a more inclusive, fraternal, peaceful and sustainable world."

The 2022 celebration will double down on those efforts.

Each day of the week will center on one of the seven thematic goals under the Laudato Si' Action Platform:

"As the purchasing of fossil fuels funds wars and further destroys God's creation, our Holy Father is calling on us not to despair but to unite, not to lament this destruction but to take urgent action together," Cardinal Michael Czerny, head of the integral human development dicastery, said in an Earth Day message announcing Laudato Si' Week 2022.

Salesian Fr. Joshtrom Kureethadam, head of the dicastery’s ecology sector, told EarthBeat in an email that they hope focusing Laudato Si' Week on the action platform and its goals "will help us get closer to reaching the critical mass of people that is necessary to shape a true ecological revolution and save our common home."

The pope's call for a worldwide ecological conversion is also a call to a synodal conversion, he added, that begins with listening to poor and marginalized communities and to the earth itself, especially within each person's local area.

"It is only by walking together that we can take meaningful action on behalf of our common home," Kureethadam said. 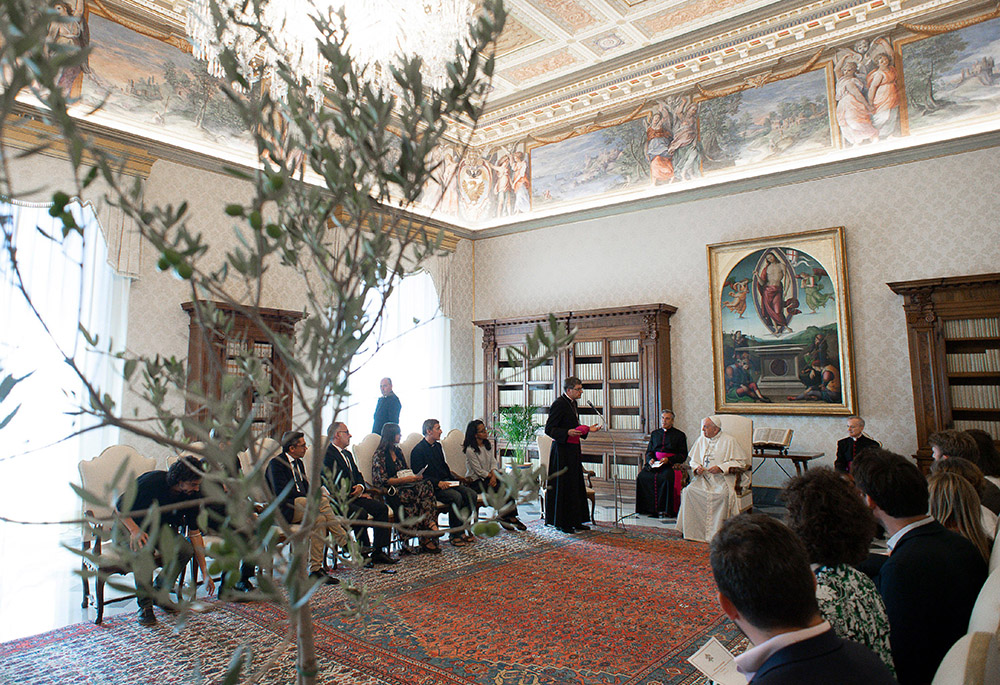 Pope Francis meets with a group of clergy and laypeople advising the French bishops' conference on ecological policies and on promoting the teaching in his encyclical, "Laudato Si', On Care for Our Common Home" Sept. 3, 2020. (CNS/Vatican Media)

A prayer gathering on May 22, hosted in Uganda, will feature voices of people and communities on the front lines of climate change. Another liturgical celebration will take place May 24 at the Manila Cathedral in the Philippines, which will be followed by a program showcasing ways various communities have responded to the encyclical's calls toward integral ecology and responding to the poor.

A conversation on biodiversity, in advance of the United Nations COP15 Convention on Biodiversity later this year, will include Salesian Sr. Alessandra Smerilli, secretary of the integral human development dicastery, Indian environmental activist Vandana Shiva and Theresa Ardler, a Gweagal Aboriginal woman and director of Gweagal Cultural Connections in Australia.

Other discussions will focus on the ties between climate change, fossil fuels and violence, and ways for Catholics to align their finances and investments with their faith and Laudato Si' during an event* May 26 hosted at Ireland's An Tairseach Ecological Retreat Centre.

A Laudato Si' Festival showcasing Catholic artists will be held May 28 in Assisi, Italy, the birthplace of patron saint of ecology St. Francis of Assisi, and the week will conclude the next day with a final prayer gathering based in Brumadinho, Brazil — where a toxic waste spill in 2019 killed 270 people — that will also uplift voices of people impacted by climate change.

The idea for a multinational celebration was to show how the Catholic Church is responding in prophetic ways to the climate emergency and ecological crises around the world, said Tomás Insua, executive director of Laudato Si' Movement.

"On six continents, Catholics are taking urgent action to combat the dual crises of climate change and biodiversity collapse," he told EarthBeat. "They're taking action in the ways that make sense for their communities, from using sustainable transportation in Europe to planting trees in Sri Lanka to holding outdoor masses in Peru."

One of the highlights of the week will come May 27, the day spotlighting ecological education, with a sneak peak of "The Invitation," a full-length documentary film on Laudato Si' that features Francis. The film, from director Nicolas Brown, is set to be released later this year and available to stream free on YouTube Originals. Clips were previously screened during the COP26 U.N. climate change summit during an event hosted by The New York Times.

Other events throughout Laudato Si' Week will include Laudato Si' Masses in the Archdioceses of Atlanta and Chicago, tree plantings in Uganda, a youth forum hosted by Caritas Oceania, a vigil at the shareholders meeting for oil giant Shell in London and an underwater clean-up with divers in the Cebu Archdiocese in the Philippines.

A full schedule of events can be found at the Laudato Si' Week website.

Kureethadam said that Laudato Si' Week is an opportunity for every person to listen to the cries of the poor and the earth, and to what God is saying through them, and ultimately to then do something.

"This cannot be something abstract, like a mere global event in Rome at the center of the Church, but rather something grounded in our own local communities, beginning from the peripheries," he said.

*This story has been updated to provide additional information about the May 26 event.