War drives Kenya's Aweer from the forest where they find God 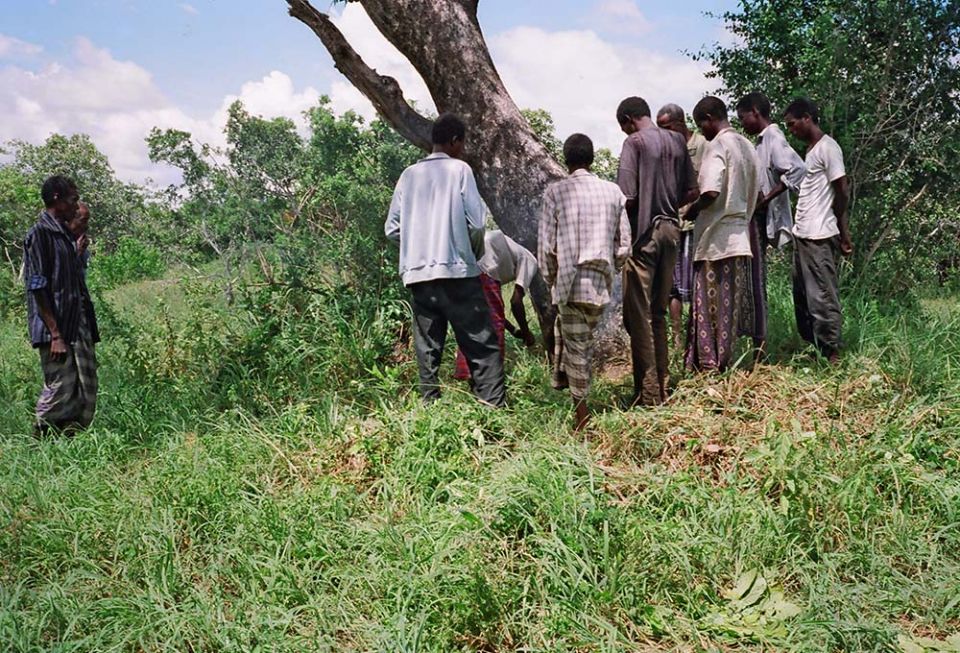 Anweer men pray at a horrop tree in the Boni region of Kenya. (Mark Faulkner)

Until relatively recently, Kenya's Boni forest was an oasis of peace occupied by the Aweer, a nomadic hunter-gatherer community. The poor, sandy soils and unreliable rainfall rendered this dry lowland forest on Africa's east coast unsuitable for agriculture, and the ubiquitous tsetse fly meant pastoralists were averse to grazing their cows or camels in this remote corner of Kenya.

So, the Aweer, also known as Boni, had the place for their own for more than 2,000 years, trading wild animal skins with their neighbors and developing a reputation as elephant hunters. Their traditional hunting of the pachyderms was sustainable, however, and until recently, the area boasted one of the largest elephant populations in east Africa.

Indeed, anecdotal evidence gleaned through conversations with members of this community elicited claims that their familiarity was such that they could understand the "language" of the "gray shadows" in the bush.

But that peace has been shattered by spillover from the civil war in neighboring Somalia, as fighting between the jihadist militant group Al-Shabaab and the U.S.-supported forces of the Kenyan military and African Union, turned the Boni forest into a battleground. Militants crossed the border from Somalia to slaughter elephants for their ivory, which they sold to purchase more guns and ammunition.

Today, armored four-wheel-drive vehicles plow through the sun-dappled sacred glades where Aweer hunters in giraffe-hide sandals once trod, and the stench of petrol and diesel exhaust replaces the fragrance of burning balambala wood offerings intended to appease the spirits of the bush.

The demise of the Aweer community represents the severing of another link in the fragile chain connecting environmentally destructive industrialized societies to communities and ways of life that might offer insights into sustainable living.

The Aweer community found itself caught between a rock and a hard place. The Al-Shabaab Islamists accused them of spying on behalf of the Kenyan authorities, while the Kenyans asserted that the community was leaking information to the Osama bin Laden-inspired militants based in Somalia.

Many members of the Aweer community fled the bush, as they had done in the 1960s, when newly independent Somalia sought to expand its borders so as to include all ethnic Somalis in northeastern Kenya. Others were forcibly corralled into the few village settlements where they were interned in what was euphemistically called "protective custody." Visits to the bush were considered off-limits, and thus links to their cultural heritage were curtailed.

The demise of the Aweer community represents the severing of another link in the fragile chain connecting environmentally destructive industrialized societies to communities and ways of life that might offer insights into sustainable living and the responsible stewardship of our shared planet.

June 18 marked the sixth anniversary of the publication of the encyclical "Laudato Si', on Care for Our Common Home," in which Pope Francis lamented not only the exploitation and degradation of the environment, but also the impact this has on social structures that shape "cultural identity and [the] sense of the meaning of life and community." 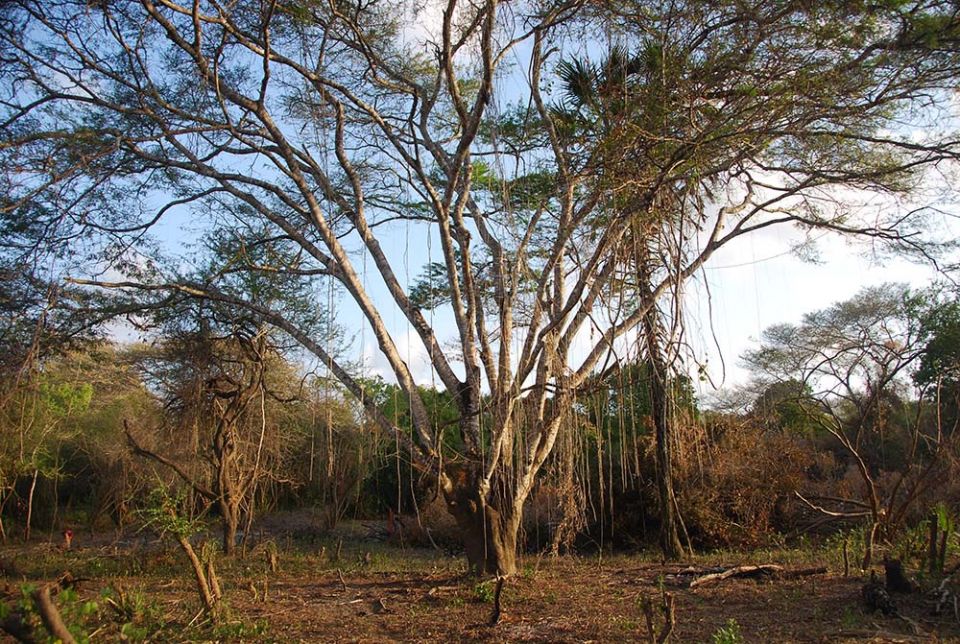 An indigenous tree stands amid deforestation in the Boni forest of Kenya. (Flickr/USAID/Kibodo Trust and SECURE/Samia Omar Bwana)

Elements of the symbiotic relationship with the bush still survived when I lived among the Aweer for more than a year in 1998 while pursuing doctoral research, with frequent return visits since. Perhaps one of the most amazing relates to the "honeyguide" bird that chatters to the Aweer as it flits from tree to tree, guiding the human figures (who sing a melodious response to the bird's tweets) to the site of a nest of wild bees. There the Aweer gather their honey in large calabashes while the bird is left to gorge on the larvae and honeycombs.

Over the last 100 years, efforts have been made, first by the colonial administration and then by the independent government, to settle the Aweer in fixed villages, but this hunter-gatherer community is drawn inexorably back to its nomadic lifestyle.

Likewise, recent efforts by Islamic missionaries have seen the Aweer adopt a veneer of orthodoxy so as to secure donations of bags of rice and sugar when a Muslim feast is marked, but such a pretense is soon abandoned, along with the kanzu (the white Islamic robe), when they assume their "real" identity, which is inextricably associated with the bush.

Indeed, although the adhan (the Islamic call to prayer) resonates around the village five times a day, this is all part of the settled environment to which the Aweer do not feel they belong. Rather, the bush — the place where the ancestors live, where prayers for the Aweer community are offered, where certain trees and shrubs are imbued with the essence of those who have died, and the wood and bark of other trees can be fashioned to become the voice of spirits — is the real world that constitutes the backdrop against which the Aweer live out their lives. 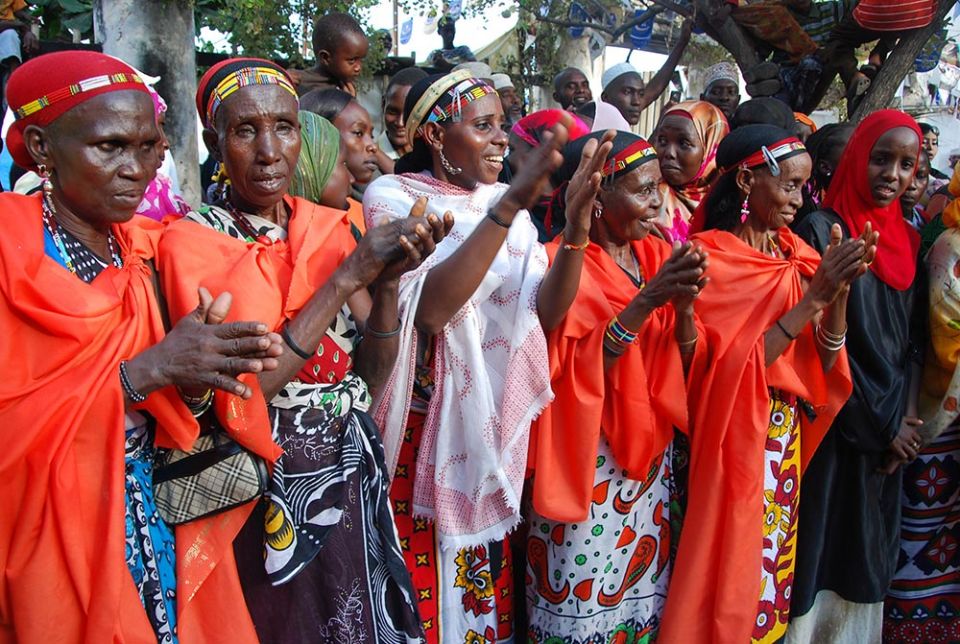 This is the environment in which the Aweer realize their true identity. Memories of traversing the dry lowland forest environment — before they came to settle in the unfamiliar village structures — and echoes of locales where they regularly camped and hunted trip off the tongue. Like pilgrimage sites that feature in the religious lives of other peoples, the bush constitutes a "given," an absolute reality and touchstone to which the Aweer can refer for answers concerning their origins and their destinies.

The forest is their catechism; its topography is imbued with religious significance, allowing the community to draw on the past so as to understand the present and determine their future.

In seeking to understand the power of the memory of the bush in the collective mind of the Aweer, one is inclined to assent to the view of Simon Schama in Landscape and Memory, where he writes: "Before it can ever be a repose for the senses, landscape is the work of the mind. Its scenery is built up as much from strata of memory as from layers of rock."

For the hunter-gatherer population of Boniland, the lowland forest, which has for so long been their home, is, as Schama continues, "a text on which generations write their recurring obsessions."

While the Aweer interact through prayer and offerings with the various spiritual entities of the bush, a High God is the benevolent, immanent and omnipresent reality that pervades the lowland forest and the Aweer's religious imagination.

Neighboring ethnic communities have safety nets in times of adversity — the pastoralists can fall back on their cows or camels, and the agriculturalists on their grain stores — but the Aweer are totally dependent on the High God to provide for them on a daily basis. It is this High God, whom they do not address directly, who provides the fruit and root vegetables that the women glean in the forest glades, and who leads small antelopes into clearings where the Aweer hunters wait with bows and arrows, or to the traps that have been set.

Where are the voices lamenting the loss of vibrant and colorful threads from the rich tapestry, the warp and weft, of God's encounters with the human family?

The time I spent living among the Aweer saw me participating in their activities, listening to their prayers and observing their rituals. Truths of my Catholic faith were mirrored back to me, but often in a form that took me by surprise, cloaked, as they were, in the culture and environment of this nomadic society.

I saw that they had long walked with God along the woodland paths and listened to him in the constant background hum of the forest. I was afforded a peek behind the veil where I recognized God, the Father of Jesus, but in a guise that was appropriate to their lives as people of the bush.

They welcomed me, a stranger, into their community and allowed me to catch a glimpse of God that enriched and expanded my own religious knowledge and experience.

But none of this should be a surprise. Nearly 60 years ago, at the Second Vatican Council, it was agreed that, "from ancient times down to the present, there is found among various peoples a certain perception of that hidden power which hovers over the course of things and over the events of human history. ... This perception and recognition penetrates their lives with a profound religious sense." The document Nostra Aetate goes on: "The Catholic Church rejects nothing that is true and holy in these religions."

Since then, the likes of the late Jesuit Jacques Dupuis had sought to develop the theological understanding behind Nostra Aetate, and the Benedictine monk Bede Griffiths pioneered the integration of Christian and Hindu spirituality in his ashram in India.

Francis took up this refrain in Laudato Si', when he wrote:

It is essential to show special care for indigenous communities and their cultural traditions. They are not merely one minority among others, but should be the principal dialogue partners, especially when large projects affecting their land are proposed. For them, land is not a commodity but rather a gift from God and from their ancestors who rest there, a sacred space with which they need to interact if they are to maintain their identity and values. When they remain on their land, they themselves care for it best.

But the prospects are not good for the Aweer. War has driven this community from their forest home, and the likelihood is that they will not return. Instead, unscrupulous and mercenary-minded neighbors will move in and take their place, looting the highly profitable hardwood stands, clearing the bush and establishing ranches for their vaccine-protected cattle.

The bush cathedral will be decimated, its congregants dispersed, and a local, intense experience of God lost forever. It is a process being repeated across the globe, and our knowledge and experience of the diverse and surprising manifestations of God is in rapid decline.

All peoples of faith are the losers. I applaud the British broadcaster and naturalist Sir David Attenborough as he brings to the world's attention the destruction of the natural environment and the imminent extinction of numerous species, but where are the voices lamenting the loss of vibrant and colorful threads from the rich tapestry, the warp and weft, of God's encounters with the human family? 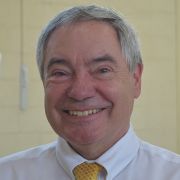 Mark R.J. Faulkner is the author of Overtly Muslim, Covertly Boni: Competing Calls of Religious Allegiance on the Kenyan Coast, published by Brill.