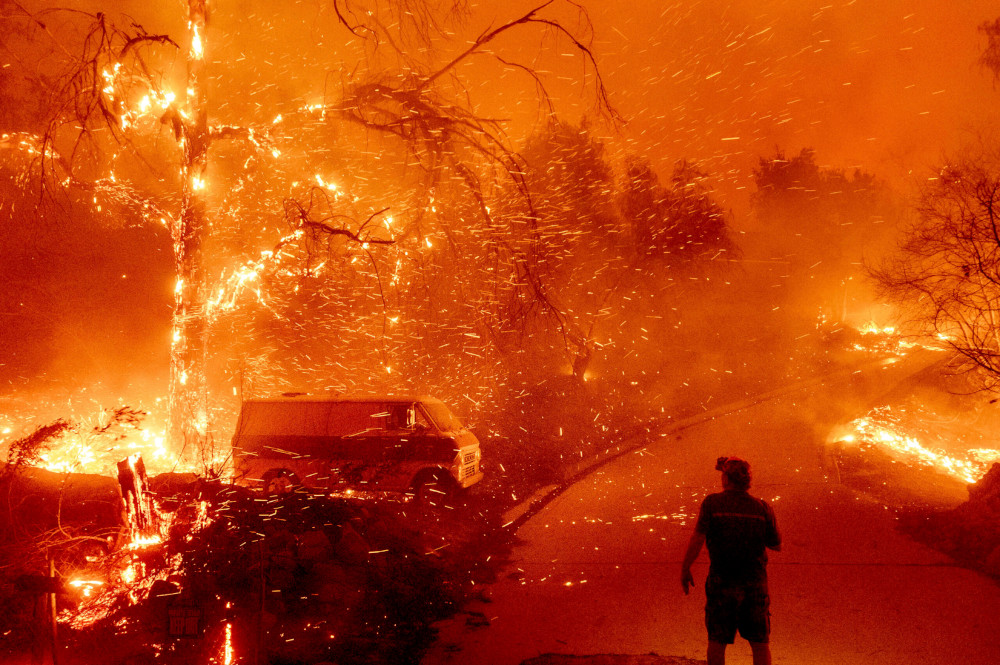 Bruce McDougal watches embers fly over his property as the Bond Fire burns through the Silverado community in Orange County, California, on Dec. 3, 2020. (AP/Noah Berger)

If you got to spend 14 minutes with Pope Francis, what would you say?

In October 2021, Pope Francis initiated a three-year campaign to listen to perspectives and wisdom from ordinary Catholics. The goal of this "synodal process," as it's called, is far from trivial. Francis wants this intentional listening to discern future directions for the Roman Catholic Church.

Through a synodal project of our fellow Jesuit institution Loyola University Chicago, we met with university students from across the central United States and Canada to discuss concerns and solutions related to migration and its root causes. We were then elected to speak directly to Francis — to represent the interests, hopes, dreams and anxieties of young Catholics in our region.

So, what did we say to the pope on behalf of our peers?

As young people, we told him climate change is our generation’s most pressing social issue — one that threatens our future, is a profound source of generational anxiety and is inextricably tied to all other social issues.

The effects of climate change are well-documented: food and water stresses, resource conflicts, severe weather events, sickness and death. Climate change already causes an average of 20 million refugees every year and 5 million premature deaths. With global droughts and sea level rise, estimates show there may be 1.4 billion climate refugees by 2060 and 2 billion by 2100. All these adverse effects disproportionately harm communities of color.

Given these numbers and terrifying projections, we also told Francis that our generation is frustrated with U.S. Catholic leaders who do not seem to grasp the gravity of our crisis and are unwilling to enact church teaching.

Francis has echoed the teachings of his predecessors St. John Paul II and Pope Emeritus Benedict XVI: Climate change is a moral issue and demands rapid, robust action. As a global moral voice, the Catholic Church controls vast resources — money, buildings, land, education institutions — and must use its assets to address the climate crisis. Francis outlines all this in "Laudato Si'," his 2015 encyclical letter to Catholics and "all people of good will."

However, one of us recently co-authored a study with Creighton University faculty that demonstrated bishops' climate silence: In more than 12,000 columns written by U.S. bishops in diocesan newspapers, fewer than 1% even mentioned climate change.

These findings echo broader sentiments that bishops do not teach about climate change. They also support evidence that most bishops have not taken concrete action steps commensurate with the climate crisis. For example, no U.S. diocese has committed to carbon neutrality. Similarly, in our experiences priests never talk about climate change. Few parishes utilize clean energy.

Young people value authenticity and deplore hypocrisy. We told Pope Francis that U.S. Catholic leaders' failure to share and enact the church's own climate teachings is causing many in our generation to become disillusioned with the church.

As a global moral voice, the Catholic Church controls vast resources — money, buildings, land, education institutions — and must use its assets to address the climate crisis.

As young Americans, we told him that frustration with failed climate leadership also extends to elected officials. Our generation is falling victim to leaders' unwillingness to enact science-based climate change policies. We told Francis that this failed civic leadership is causing many of our peers to become cynical about civic engagement and skeptical of our institutions.

Given these failings, we told the pope that young Catholics recognize a need for a new strategy. Following Catholic and Christian precedents, we proposed active nonviolence that expresses Christian love as a missing complement to existing climate actions.

King emphasized active nonviolence as animated by love of one's community from which, out of love, one demands more. He also stressed it is a last resort that follows failed negotiation. Such negotiation is underpinned by conversion and what Francis calls "authentic encounter." 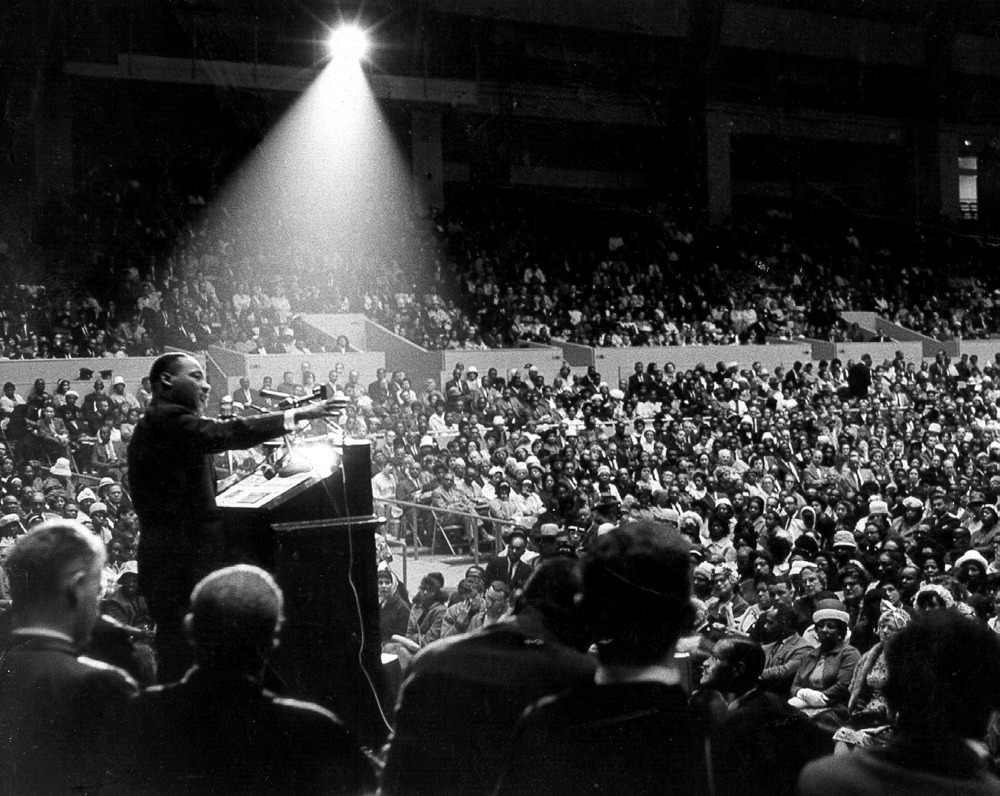 We agree that our generation should continue attempts of negotiation, including meeting with bishops and elected officials to express our deep concern about climate change and ask for adequate action in response. In fact, this summer, Cardinal Jean-Claude Hollerich of Luxembourg and Cardinal Blase Cupich of Chicago urged young Catholics to seek conversations with their bishop about climate change.

If these appeals fail, however, Christian love justifies — and we believe obligates — active nonviolence that follows the faithful precedent of Markoe, Lawson and King.

It is no secret that we are running out of time to avoid climate catastrophe. The Nobel Prize-winning Intergovernmental Panel on Climate Change estimates that to have a 50% chance of avoiding rapidly accelerating global warming, the world must cut carbon pollution in nearly half by 2030 and become carbon neutral by 2050.

Bishops' and lawmakers' current inaction despite the closing window of opportunity to protect our future suggests time can perpetuate injustice. In this time of climate crisis, talk of active nonviolence is a timely — and, in fact, an overdue — expression of Christian love.

U.S. Catholic leaders' failure to share and enact the church's own climate teachings is causing many in our generation to become disillusioned with the church.

The centers would train Catholics and other people of goodwill. Since active nonviolence seeks a change of heart that begins with authentic encounter, these centers would teach St. John Paul II's concept of "ecological conversion" along with skills of negotiation and advocacy. These centers would also teach the proven techniques of nonviolent direct action.

Francis applauded the intuitions of our group. Faced with modern challenges, he insisted that "we need the prophecy of nonviolence" and affirmed "the construction of nonviolent activities."

Building on our generation's frustrations with U.S. Catholic leaders' hypocritical failure to share and enact church teaching on climate change, he said, "Nonviolence is the road of humanity's nonhypocrisy, which is the real revolution, the real change, the real liberation. … Through the path of nonviolence, you reach sincerity and reject all hypocrisy."

We had the once-in-a-lifetime opportunity to speak directly with Pope Francis on behalf of our peers. We told him that for many in our generation, climate change encapsulates what the Second Vatican Council called the "joys and the hopes, the griefs and the anxieties of the people of this age." We told him that the current inaction of our faith and political leaders is compelling young people to turn to the celebrated Christian tradition of active nonviolence.

As young Catholics disheartened by failed negotiations, we see this course of action as one our faith obligates. For our sake and the sake of current and future generations, we hope and pray you agree.