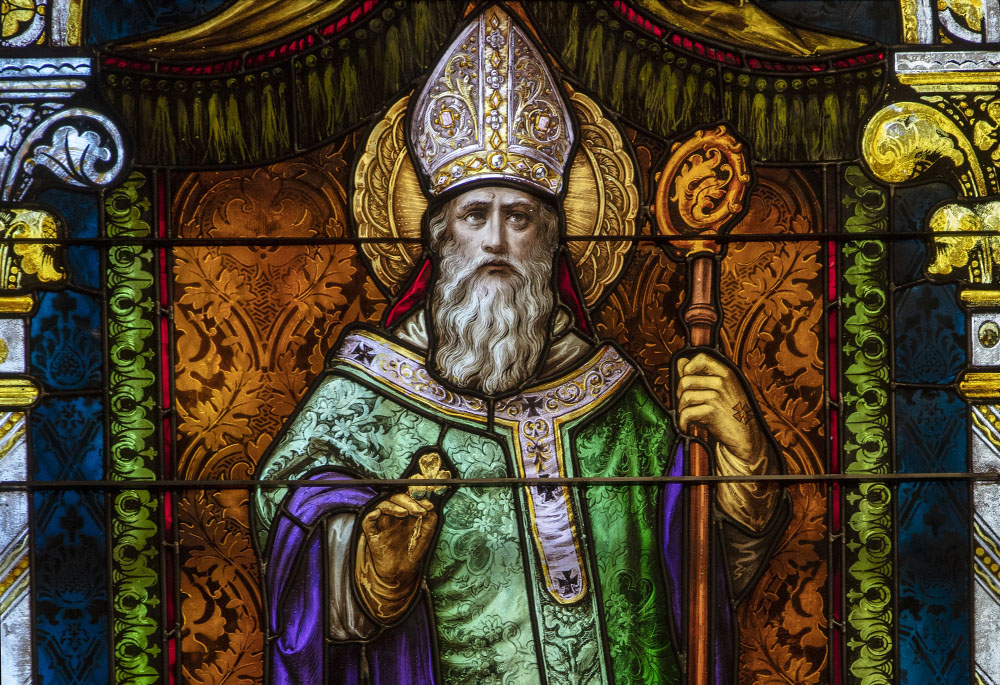 The ecological crisis is, among many things, a crisis of connection. Many of us descend from or are recent immigrants. We no longer connect to where we live with teachings and practices honed over millennia. Alienated from the land, many of us no longer relate to the life around us as relatives or spiritual kin. Instead, we consider the natural world to be empty matter or a resource to exploit without counting the costs. St. Patrick teaches us another way.

Thinkers such as Robin Wall Kimmerer, author of Braiding Sweetgrass, advocate for recovery of an Indigenous way of knowing born of deep connection to the land, whether it's the land of your ancestors or not. By learning from Indigenous wisdom and reclaiming practices from one's own traditions, immigrant people can become what Kimmerer calls "naturalized to place" and grow into mutually sustaining relationships with the other-than-human world.

There are models of this type of journey within Catholic tradition. St. Patrick overcame a disconnection with nature similar to what many of us experience today. He not only developed relationships with the other-than-human world but through the Lorica, a prayer song also known as the Deer's Cry or St. Patrick's Breastplate, became a member of it.

St. Patrick and the Deer's Cry

According to tradition and one of the earliest written accounts of his life, St. Patrick became a deer.

Patrick's transformation into a deer was the culmination of a long spiritual journey. A jaded adolescent noble ripped from Roman luxury and urban pretension by Irish raiders and transplanted into a tribal society, Patrick overcame that trauma and over six years in Ireland discovered his true self, through relationship with his adopted Irish kin and through prayer on the land where he herded sheep as a slave.

Patrick escaped Irish captivity, but the land and people called him back. After his return, his ministry was embraced by many Irish but not all, especially some of the powerful. When Patrick lit a Paschal fire and defied royal customs, he earned the wrath of a tribal chieftain and his warriors. On the run, Patrick sang the Lorica — the Deer's Cry — and transformed his band into a herd of deer to avoid capture. 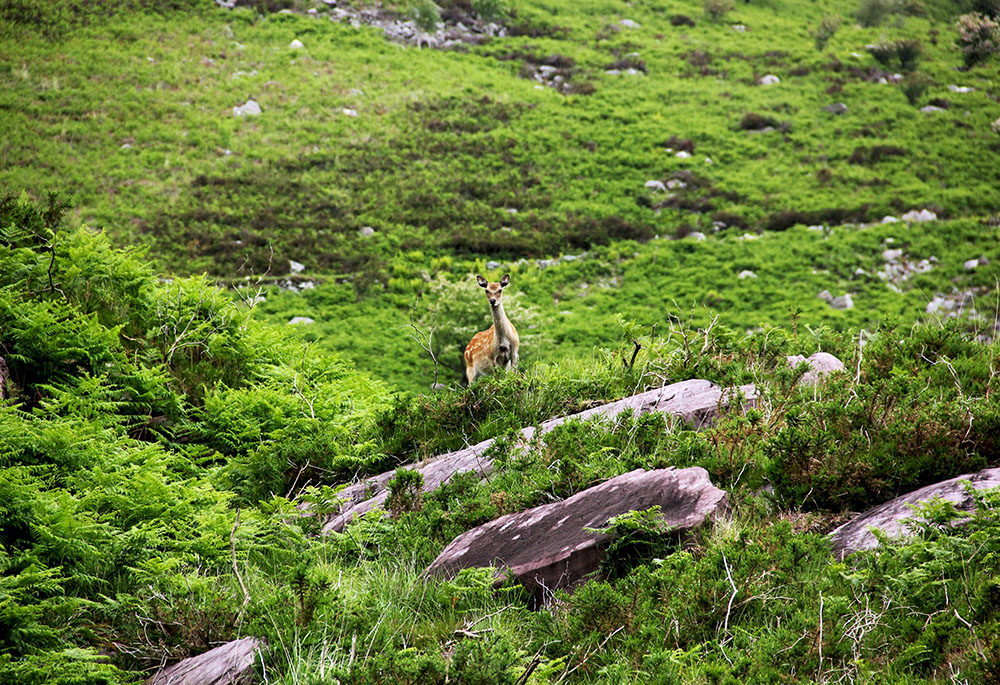 A doe deer in green grass at the Gap of Dunloe, Ireland (Unsplash/Alexandra Borovova)

The Lorica, a Trinitarian prayer invoking the main characters of salvation history, also invokes the powers of the created world. "I bind to myself to-day," he prayed, to:

The power of Heaven,
The light of the Sun,
(The whiteness of Snow,)
The force of Fire,
The flashing of lightning,
The velocity of Wind,
The depth of the Sea,
The Stability of the Earth,
The hardness of Rocks.

What seems to be only beautiful poetry is Patrick addressing the agents of his conversion. The sun and moon, rock and ocean and plants and animals shattered the existential malaise created by a noble lifestyle — "I didn't even care about myself, " he remembered in his Confession — and called up prayer from within him. The Irish land not only caused him to embrace his Christian inheritance but also "indigenized" its more ecologically integrated contours. Indigenous elders often say that the land itself teaches these ways — it did for Patrick.

Related: Re-Indigenize your faith by recognizing sweetgrass, all things as kin

But land is a general category and Patrick, like Indigenous peoples across the globe, knew the forces he bound himself to in prayer not as impersonal but as living spiritual beings. The Indigenous emphasis on spirits living in the world of nature is surprisingly congruent with Catholic faith — not the various stripped down modern forms but that of the patristic and scholastic ages. For traditional Catholic theologians, angelic beings move the universe.

St. John Henry Newman captured it best in his 1831 sermon "The Powers of Nature": "Those wonderful and vast portions of the natural world which seem to be inanimate" to the secular mind are moved by "Spiritual Intelligences." An immanent Creator intimately permeates every corner of this vast and dynamic cosmos through "the agency of the thousands and ten thousands of His unseen Servants."

Patrick adds a common Indigenous emphasis. In his prayer, he doesn't just recognize these servants but binds himself to them, in the same manner he does with the Trinity. This forming of relationships is a spiritual way of talking about the real-world kinship Kimmerer emphasizes.

The making of relatives with surrounding beings has the effect of blurring the separation that we commonly assume exists between humans and the rest of creation. This heightening of binding to complete identification is also a part of the tradition of Patrick's adopted Irish ancestors, such as in the chant of Amairgin, the poet warrior of the Gaels:

I am Wind on Sea,
I am Ocean-wave,
I am Roar of Sea,
I am Bull of Seven Fights,
I am Vulture on Cliff . . .
I am the Point of a Weapon (that poureth forth combat),
I am God who fashioneth Fire for a Head.

The deer in Celtic and Catholic tradition

For Patrick, merging with the other-than-human world culminated in becoming a deer. The deer is a powerful Celtic spirit and shapeshifting is a common theme in Indigenous traditions. Tuán, one of the first inhabitants of Ireland, survived the waves of invasions by transforming from horse to boar to hawk to salmon. The mother of Oishin, a pre-Christian Irish hero and leader of the fiana, was a deer.

The deer retained cultural and spiritual power in Celtic cultures in Christian contexts. The Deer Stone is where a mother deer called by St. Kevin nursed an orphan child. And in my surname, Costello, one etymology is something like "Son of one in the form of a deer." 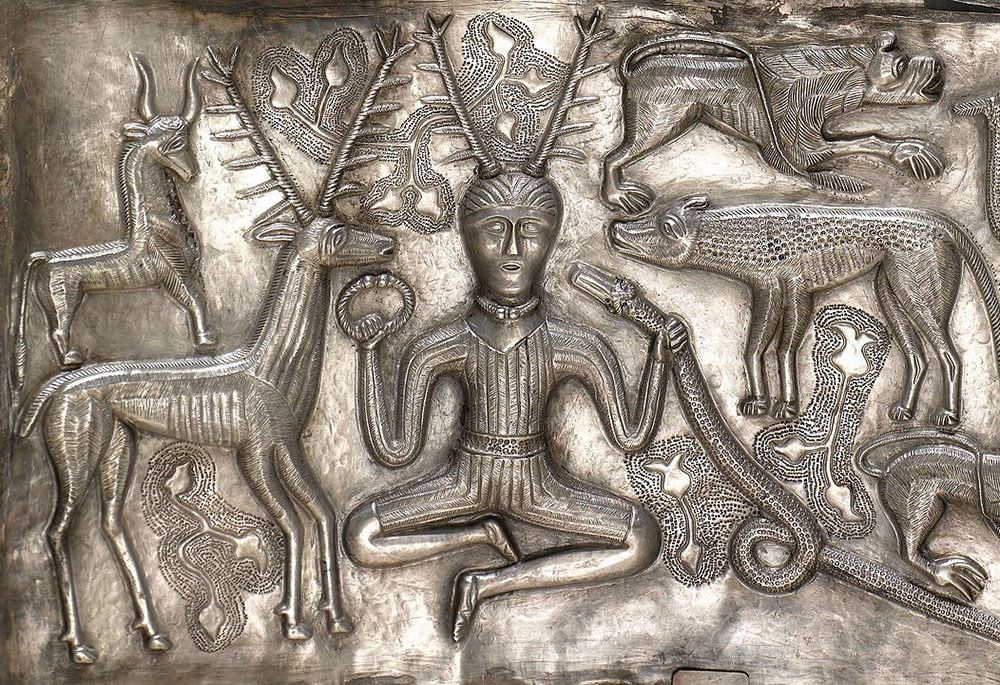 The Cernunnos-type antlered figure or horned god, on the Gundestrup Cauldron, on display, at the National Museum of Denmark in Copenhagen (Wikimedia Commons/Nationalmuseet, CC BY-SA 3.0)

By singing the Lorica and becoming the deer, Patrick placed himself in the Indigenous Celtic lineage and made the ultimate connection to place. It's as if he declared, "This land is not just where I now live, not just a home. Rather, I am this land and this land is me."

Patrick's story is an enactment of Christian faith in its fullness, which has long seen the spiritual life as the life of deer: "As the deer longs for streams of water, so my soul longs for you, O God" (Psalms 42:2). A deer is also seen as a model of power in the context of conflict, illustrated by David's prayer that "He makes my feet like the feet of a deer; he causes me to stand on the heights" (Psalms 18:33, 2 Samuel 22:34).

Even Christ himself became the deer, appearing in the antlers of a stag to St. Eustace and St. Hubert. The genius of the Lorica is that it acknowledges the unseen servants of the land and sky, makes relations with them and declares that the beauty of Christ infuses each relationship.

The genius of the Lorica is that it acknowledges the unseen servants of the land and sky, makes relations with them and declares that the beauty of Christ infuses each relationship.

Patrick was an immigrant, yet became an indigenous Irish saint. He accomplished a kind of exodus from his bubble of urban luxury to seamless relationship to human and other-than-human communities, spiritual kinship so deep that he became the Holy Island. Patrick's story can teach us how to connect with the land we call home in respectful and regenerative ways, even if it isn't the land of our ancestors.

Too often we encounter songs as a relic from the past. The Lorica is — or should be — a living "event," an infusion of power to strengthen us on our journey to become "naturalized to place." Prayer is too often seen as a way of taking us out of where we are. The Deer's Cry sinks us deeper into where we are and fosters mutually sustaining relationships with the other-than-human world, not only to address the environmental crisis but to become fully human.

And, like for Patrick, aid us on our journey to full communion with God.