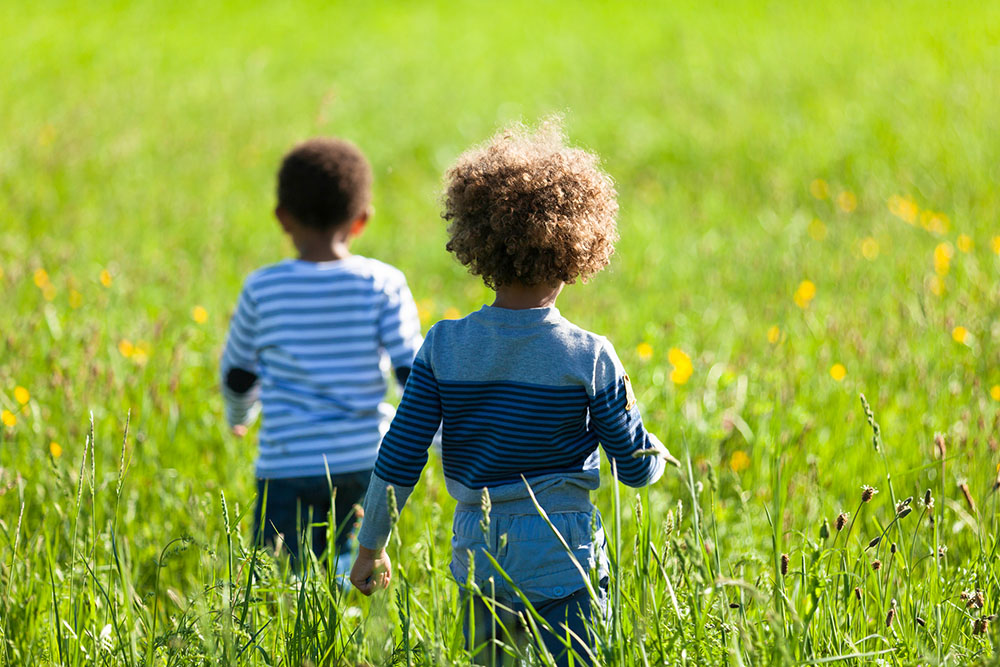 Black children play outdoors in this illustration photo. "What it means for me, to be Black, is to just have a really close connection to the land, to grow your own food, to be in connection with nature," says Byron Wratee, one of the panelists in the Jan. 10 virtual conversation "Imagining Our Ecological Future: Black Life and Laudato Si'." (Dreamstime/Sam74100)

Growing up in rural South Carolina, Byron Wratee was always in nature.

His family went on camping trips, and they still do. But a lot of their time outdoors has revolved around food. As "good country folk," how Wratee described his community in Williamsburg County, they spent much time hunting and fishing. They also grew fruits and vegetables in their garden, including squash, collard greens and watermelon — what Wratee proudly called an indigenous African fruit.

"I'm really very proud to be Black. And what it means for me, to be Black, is to just have a really close connection to the land, to grow your own food, to be in connection with nature," he said.

LaRyssa Herrington also spent a lot of her youth in Illinois out in the fresh air. She joined the Girl Scouts, went on overnight camping trips and went swimming in the Great Lakes.

As she continued activities like backpacking and kayaking in college, she found herself reflecting how in her childhood there weren't always a lot of people who looked like her doing those types of things.

The history of American segregation wasn't limited only to schools and public transit, and in many cases Jim Crow laws extended to public parks as well, including at Shenandoah National Park in Virginia. It wasn't until the mid-20th century that national parks began desegregating in earnest, but even then many people of color still felt like unwelcomed guests. A 2020 report by ABC News found that minority communities represented just 23% of national park visitors, with another study showing Black Americans at less than 2%. 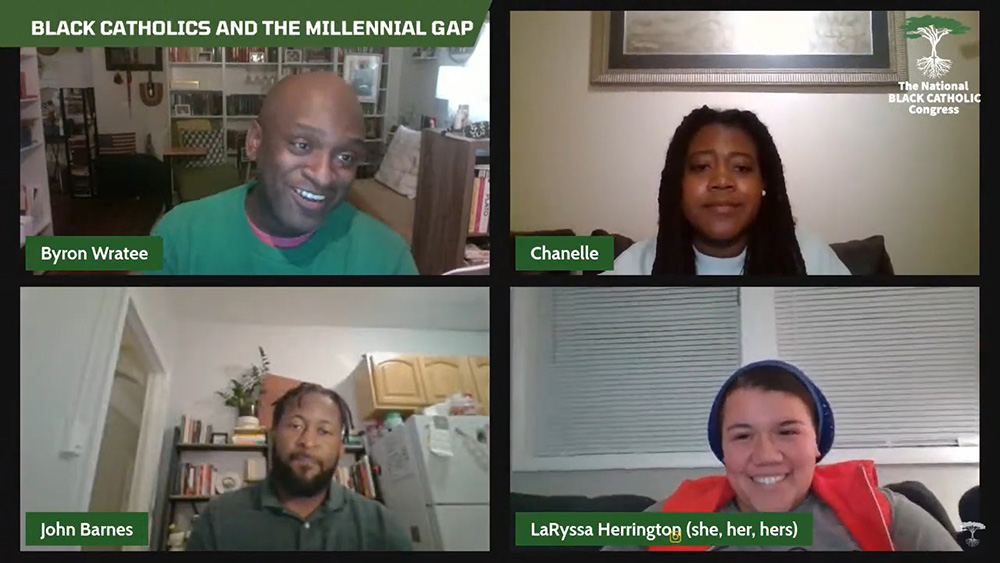 "And people don't think about that until you are the one woman or the one man who's out there doing those things," said Herrington, a second-year doctoral student at the University of Notre Dame. "So I think about that a lot and I think about just accessibility and those doors having been closed for us."

The personal stories were part of a 90-minute virtual conversation Jan. 10 hosted by the National Black Catholic Congress. The event, titled "Imagining Our Ecological Future: Black Life and Laudato Si'," positioned four young Black Catholics, all pursuing doctoral degrees in systematic theology, to talk about their own experiences with nature and environmental racism, as well as church teaching on ecology and the contributions they bring to the environmental conversation, both within the church and beyond.

The conversation included a video of Pope Francis and a poem on rivers from Langston Hughes. There were references to Alice Walker, the words of St. Francis of Assisi and excerpts of "Laudato Si', on Care for Our Common Home," Pope Francis' 2015 encyclical that took its name from the saint's famous "Canticle of the Creatures."

The series was born out of conversations Herrington had with Valerie Washington, executive director of the National Black Catholic Congress, on ways to engage millennial and Gen Z Catholics on the issues they care about, and address areas like racism and discrimination driving them from the church.

'I wanted us to think about how ecological justice and social justice are not competing, but rather connected.'

The ecology episode highlighted the many ways Black culture has long connected with the land, from farming as enslaved people to cookouts and outdoor church picnics today. The panel of young Catholic scholars also dived into the Bible, going beyond "dominion" in the Genesis stories to also look at the Psalms and parables of Jesus where he connects with the earth.

Chanelle Robinson, a third-year doctoral student at Boston College, served as host of the ecology conversation.

"I wanted us to think about how ecological justice and social justice are not competing, but rather connected," she told EarthBeat in an email, including how throughout Laudato Si' Francis invites everyone to consider how all of creation is interrelated, including with future generations.

In opening the discussion, Robinson said that while reflecting on current ecological crises "it's also important to think about how the death of the planet is also impacting and quickening and intensifying Black death, as well."

She recited a quote from African American theologian Melanie Harris, who observed that Eric Garner's cry of "I can't breathe" applied not only to his 2019 death from an unauthorized chokehold by a police officer, but also his asthma stemming from air pollution in his hometown of Staten Island, New York.

Studies have consistently shown that people of color are more exposed to environmental hazards, including air pollution and living in close proximity to chemical factories, power plants and hazardous waste facilities. The environmental justice movement grew out of the civil rights movement, and coalesced in the 1980s in North Carolina around opposition to toxic waste dumping in a landfill.

Since then, acceptance of environmental justice has spread, and in recent years has received greater attention in the overall environmental movement, parts of which have undergone self-examinations of their own histories of exclusion in the wake of protests following George Floyd's murder.

Wratee, also a doctoral student at Boston College, said that he sees the environmental movement primarily dominated by "a white American, ultra-liberal framework." While in law school, he was active in environmental work, and often the only African American, but was turned off when he felt leaders were more concerned with saving national parks than providing green spaces and community gardens for poor communities.

In his home state of South Carolina, for example, he said some of the biggest environmentalists are hunters. And while they're attentive to preserving deer and fish populations, there's less consideration paid to the plight of rural and poor families who turn to dumping trash in their backyards due to a lack of city services, or who rely on septic tanks because they lack reliable plumbing.

He said that's where Catholic social teaching on subsidiarity can play an important role and expand how environmental issues are defined.

Solidarity with the cry of the poor goes beyond U.S. borders, Herrington said. She recalled a college trip to Honduras where she was "devastated" seeing large amounts of trash wash ashore, and how some poor Indigenous communities had built huts out of plastic bottles.

"It's just really devastating that we care so little about the dignity of others that we're allowing them to build homes and structures out of waste, just garbage," she said.

Panel members agreed that the export of trash from countries like the U.S. to Asia, or the extensive mining of minerals and resources in Africa represents a lack of solidarity with poor and marginalized communities around the world.

As for the church's role, they said it's important that environmental racism is seen as a theological problem. 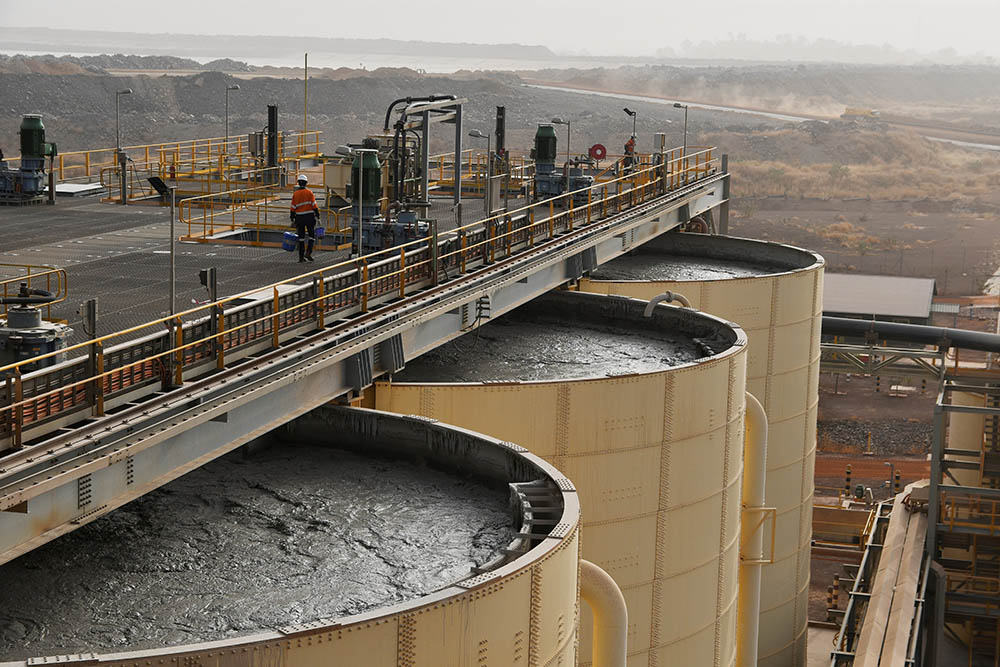 A worker walks atop tanks containing mud from which gold will be extracted at a gold mine site in Hounde, Burkina Faso, Feb. 13, 2020. The mine is operated by the U.K.-based Endeavour Mining Corporation. (CNS/Reuters/Anne Mimault)

A first big step, the panelists said, is not only move away from a domination view of dominion and to see humanity as part of creation, but to recognize that for all of creation to survive and flourish begins with greater awareness of the threats it faces, especially those often-overlooked parts of our world.

As for what they can contribute as young Catholics of color to environmental discussions within the church, Barnes told EarthBeat in an email that for the church to earnestly address environmental justice or any other societal issue, it has to seriously address racism and the legacy of white supremacy in the country.

"The presence of young Black folks in the Church is a sign of our commitment to the Church and to our belief that by the grace of God, one day, this Church, in every place will approach every endeavor from an Anti-Racist perspective," he said.