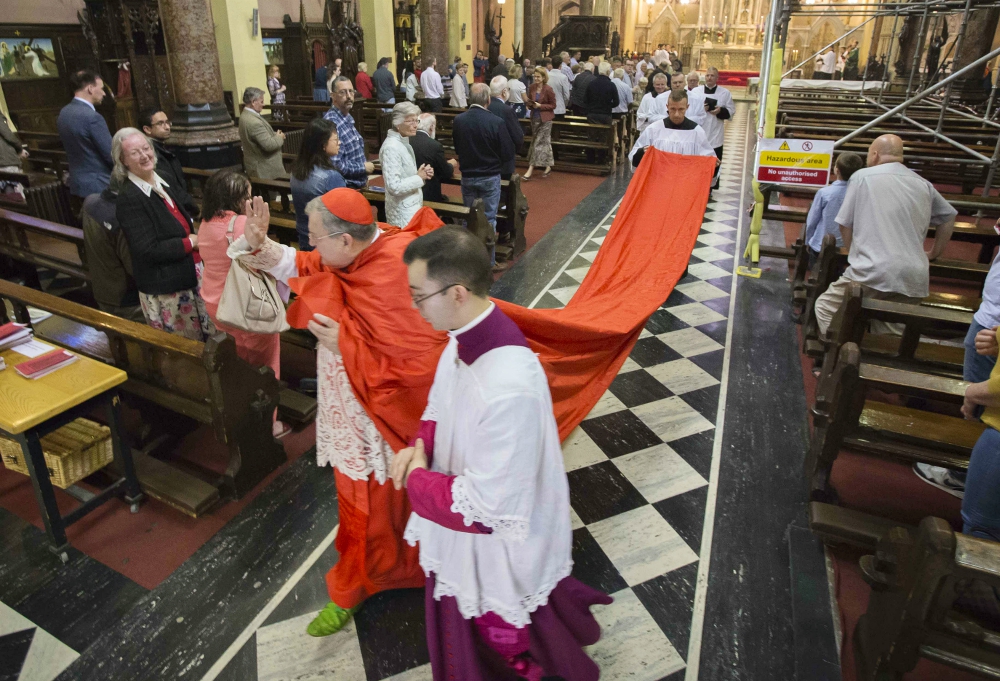 Catholics, especially those of a traditional bent, love and understand symbols. Someone as traditionalist and as media-savvy as Timothy Busch has to understand that whatever else was said during his Napa Institute's sprawling conference at the end of July, the most visible symbol was Cardinal Raymond Burke, one of the most outspoken critics of Pope Francis.

The five-day conference in Napa, California, at the posh Meritage Resort and Spa, one of Busch's holdings, was transparently partisan (Republicans Sen. Lindsey Graham of South Carolina and former Gov. Scott Walker of Wisconsin were the politicos on hand) and tilted, episcopally and theologically, to the far right.

All of that, of course, is unsurprising. Busch has made no secret of his ambitions or of his spending aimed at influencing the church, its institutions and the narrative that is fed to the wider culture. But symbols are important and Burke is a living symbol, in both thought (amply expressed in rather arrogant terms even when his critique is aimed at the pope) and appearance (often amply adorned in the royal paraphernalia of imagined ages long past).

His thought on this occasion, under the heading "Proclaiming the Truths of the Faith in a Time of Crisis," was a repeat of an eight-page "declaration" that he signed with four other prelates — a retired cardinal from Latvia and three bishops from Kazakhstan — outlining 40 points of contemporary church teaching about which Burke and his cohort believe "there is much error and confusion."

Of the points he raised at Napa, addressed early was "confusion" about bringing Jews and Muslims to Christianity. Burke advocates a more aggressive approach to converting those of other religions.

He might reacquaint himself with the Vatican II declaration Nostra Aetate, which speaks with great regard for other world religions, specifically, Buddhism, Hinduism, Islam and, particularly, Judaism. "The Catholic Church rejects nothing that is true and holy in these religions," the document states. "She regards with sincere reverence those ways of conduct and of life, those precepts and teachings which, though differing in many aspects from the ones she holds and sets forth, nonetheless often reflect a ray of that Truth which enlightens all men."

Burke noted more confusion in the understanding of some (including, increasingly, the U.S. bishops) that the church does not permit civil authorities to exercise capital punishment. This is a direct slap at Francis, who has advanced the growing objection to capital punishment voiced during the two previous papacies, and who recently described the death penalty as "a serious violation of the right to life of every person."

In Burke's imagination, the Catholic community is simply riddled through with confused souls, and there is error everywhere. He maintains that significant numbers of Catholics are in "open apostasy."

He took another direct shot at Francis when he criticized the working document for the upcoming Synod of Bishops on the Amazon, which includes discussion of possible ordination of widely respected married men to assure continued access to the sacraments.

"Celibacy stems from the example of Christ," said the cardinal. That may be, but it is not the only example provided, given that the chosen Twelve included married men and that the tradition of celibacy is merely a thousand years old, half the life of the church. The tradition has certainly been mutable.

Intentionally or not, the Napa gathering provided us with a full cast of those creating acute strains in the church today. In placing Burke as the keynoter, Busch and the organizers sent a clear signal: The lay leadership they exemplified would take us back to a romanticized church that never existed. It would reconstitute the clericalism that is at the heart of the sex abuse cover-up scandal that continues to undermine the authority of the church, and it would attempt to replace the dynamism of Francis' model of accompaniment with a return to a statute-bound and static institution in service of itself.

Burke personifies the kind of legal "rigorist" that Francis ardently resists. He is the modern version of that religious leader that drew some of Jesus' harshest condemnations, those who placed undue burdens on others and pronounced themselves the undisputed bearers of truth.

In an earlier interview with NCR, Busch dismissed the idea that he opposed Francis and brushed off any objections to Burke headlining his conference, stating that he's "a serious theologian." Some may consider Burke a theologian, but he made his reputation as a canon lawyer who, by all indications, thinks that Catholic Christianity is primarily a transactional enterprise in which the highest calling is to abide by every detail of every church statute as he interprets them.

It is not overstatement to say that Burke stands as representative, perhaps in the extreme, of a certain version of church and one that we believe has failed miserably. He is a member of a culture that by instinct (and not insignificantly by church statutes of that time) opted to protect those who viciously abused the most vulnerable in the community while ignoring the perpetrators' victims.

Francis invites us to a far more adventuresome embrace of the faith. For instance, in his address opening the synod on young people, he said, "This Synod has the opportunity, the task and the duty to be a sign of a Church that really listens, that allows herself to be questioned by the experiences of those she meets, and who does not always have a ready-made answer. A Church that does not listen shows herself closed to newness, closed to God's surprises, and cannot be credible, especially for the young who will inevitably turn away rather than approach."

Perhaps the tension between the rigid and unyielding boundaries of law and a pastoral approach that invites dialogue, values listening, and encourages questions — characteristics troubling to the legalist — is inevitable and perennial.

However, where Burke and his like see confusion, we see an openness to new ways of expressing the faith; where he claims clarity and precision, we experience the confusion of a community betrayed at the deepest levels by those who were supposed to be examples of Christ's selfless love.

It is time to give new symbols their place: a community where the poor are invited to the banquet; authority where mercy takes precedent over precepts; accompaniment predicated by love and acceptance, where doubts and questions are not reasons for derision and banishment.

A version of this story appeared in the Aug 9-22, 2019 print issue under the headline: Burke's church is statute-bound, static.