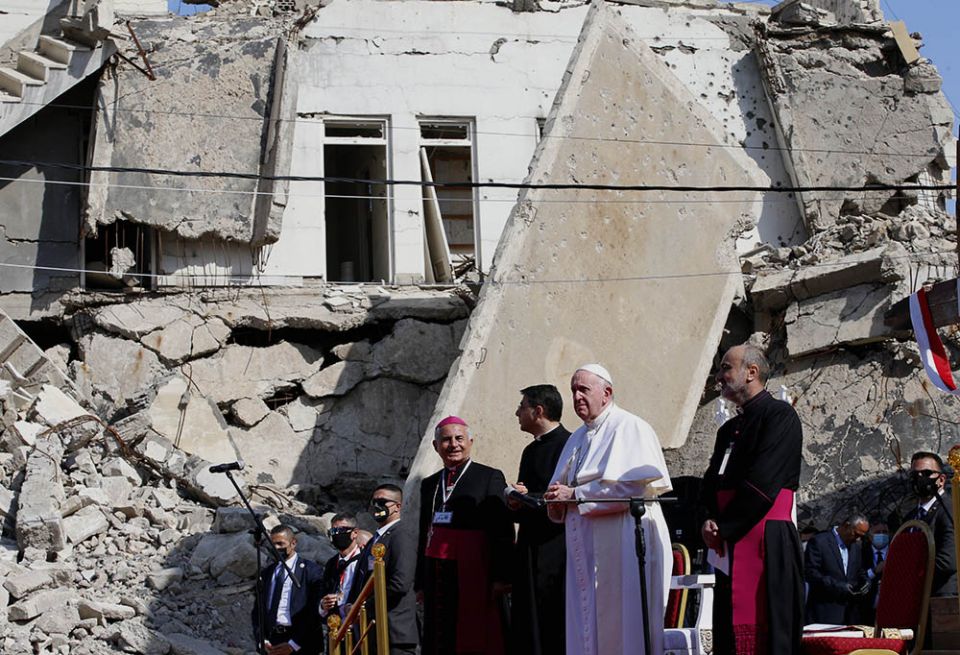 Pope Francis participates in a memorial prayer for the victims of the war at Hosh al-Bieaa (church square) in Mosul, Iraq, March 7. (CNS/Paul Haring)

QARAQOSH and IRBIL, IRAQ — Pope Francis urged Iraqi Christians not to lose hope and not to seek vengeance over their suffering during the brutal Islamic State regime, in a pair of poignant and dramatic visits March 7 to churches that were desecrated and destroyed by the terrorist militant group.

Standing amid piles of the sand-colored brick rubble of four churches in a square in Mosul, under ISIS control from 2014 to 2017, the pontiff lamented the "tragic consequences of war and hostility," but said the desire for peace "can never be silenced by the blood spilled by those who pervert the name of God."

Later at the al-Tahera Syriac cathedral in Qaraqosh, which was burned by ISIS fighters but organizers rushed to rebuild in time for the pope's historic visit, Francis said that even though much else would need to be rebuilt, the gathering "shows that terrorism and death never have the last word."

"Now is the time to rebuild and to start afresh," said the pontiff, promising: "You are not alone! The entire church is close to you."

Francis, the first pope to visit Iraq, is traveling around the country through March 8.

His visits March 7 to Mosul, Qaraqosh and Irbil in the country's north are meant to encourage Iraqi Christians, who trace their lineage to the time of the apostles but have severely dwindled in numbers since the U.S.-led 2003 invasion and the rise and fall of ISIS. Hundreds of thousands have fled the country in the years since because of the violence.

Dominican Sr. Mary Theresa Hannan, who sat with her community toward the front of al-Tahera's freshly repainted sanctuary, told NCR that the pope's visit was "a great grace and support for our faith to continue our mission in this country."

Mounir Jibrahil, a 61-year-old math teacher, recalled leaving Qaraqosh to flee the ISIS violence and coming back four years ago to find his home destroyed. He thanked Francis for coming, expressing hope that "maybe it will help to rebuild the country, finally bringing love and peace."

Unlike in Baghdad, where a coronavirus lockdown and tight security measures have limited the numbers of people taking part in the pope's visit, the crowds in northern Iraq were large, with thousands lining Francis' route for blocks around the Qaraqosh cathedral.

Although the Vatican and local organizers had said social distancing measures would be observed for the visits, the crowds were packed together outside and few people wore masks. Inside the church, people were also seated closely together.

Francis was addressed in al-Tahera by several Qaraqosh residents. Doha Sabah Abdallah recalled having to flee the city quickly on Aug. 6, 2014, as she was going about her morning chores. She said she had lost a child, a cousin and a close friend in the fighting with ISIS militants.

"We survivors must try to forgive the oppressors, as Jesus forgave his killers," Abdallah told Francis. "Imitating that in our suffering, we testify that love is stronger than everything else."

The pope thanked Abdallah for her words. "Forgiveness is necessary to remain in love, to remain Christian," he said.

"The road to a full recovery may still be long, but I ask you, please, not to grow discouraged," said Francis. "What is needed is the ability to forgive, but also the courage not to give up."

Cardinal Louis Sako, who leads Baghdad's Chaldean Patriarchate, told journalists outside the church that he hoped the pope's words would help convince Christians to stay in Iraq. "We have a lot of difficulties," he said. "But it is very important: Christians must not leave."

Syrian Archbishop Youhanna Jihad Battah, who said he had come to Iraq just to be with Francis in Qaraqosh, agreed. "The Middle East without Christians would be very dangerous," said Battah, who leads the Syrian Catholic community in Damascus. "We are few, but we are here."

The pope traveled that day to Najaf, considered the third holiest city for Shiite Muslims, where he took part in a first-of-its-kind encounter with Grand Ayatollah Ali al-Sistani, one of the world's most influential Shiite Muslim clerics.

The pope also visited the ruins of the ancient city of Ur, said to be the home of the biblical figure Abraham, and called on Iraq's religious leaders to help the country heal and rebuild following the decades of violence.

Hannan, a member of the Dominican Sisters of St. Catherine of Siena, spoke briefly about the work of her community in building Muslim-Christian relations. The sisters have opened a school for children of both faith traditions.

"We feel our future is with the future of these people," the sister said of her community's work.

Jesuit Fr. Joseph Cassar, the Iraq country director for Jesuit Refugee Service, told NCR the pope's message of cooperation between faiths was important for the task of rebuilding the places destroyed by ISIS.

"Apart from the reconstruction of buildings and infrastructure, what really needs to be reconstructed is the trust between communities," said Cassar, whose work has involved assisting Christians in moving back to Mosul and Qaraqosh.

"The pope going there is sending out a very strong message in this regard," said the Jesuit.

After giving brief remarks amid the ruins of the four churches in Mosul, Francis offered a brief prayer for the victims of the violence. As the pope opened the prayer in front of a wooden cross and the crumbling façade of one of the churches, he gave a three-line catechesis:

Healing the victims of ISIS persecution