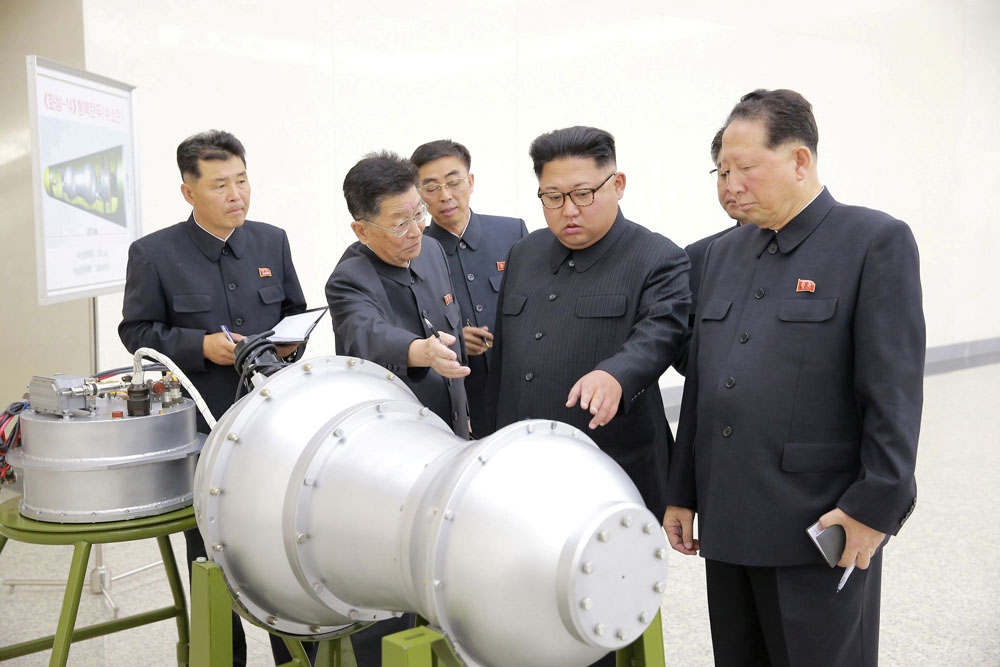 Pope Francis' condemnation of nuclear weapons, "the threat of their use, as well as their very possession," has come at a crucial time, perhaps in the nick of time. The possibility that nuclear weapons could actually be used and the cataclysm their use would wreak on the planet has never been greater than right now.

Just days after Donald Trump became president, the Bulletin of the Atomic Scientists moved the hands of its doomsday clock to two and half minutes to midnight. Reasons cited for the push included North Korea's testing of nuclear weapons, tensions between the United States and Russia, "a rise in strident nationalism worldwide … including in a US presidential campaign," and Trump's disturbing comments about the use and proliferation of nuclear weapons. We know all too well how these trends have deepened and darkened through this year.

The only time the doomsday clock has been closer to midnight was in 1953 after the United States and the Soviet Union began testing hydrogen bombs and the arms race surged. In 1984, when relations between the U.S. and the Soviets were in a stalemate and the U.S. was threatening a new arms race by seeking a space-based anti-ballistic missile system, the clock was set at three minutes to midnight.

We know a full-scale, global nuclear war would destroy the Earth, and that existential threat is supposedly what keeps the nuclear powers in check. But according to a study in the American Geophysical Union journal in 2014, even a "limited, regional nuclear war" using 100 "small nuclear weapons" would have a catastrophic effect on the entire globe.

The initial configurations of a limited nuclear attack would fry off the Earth's ozone layer "on a scale never observed," according to the study, exposing people, animals and plants to gene-altering doses of ultraviolet radiation. At the same time, dust and soot suspended in the atmosphere would cause global temperatures to plummet, shortening growing seasons and dramatically reducing food production and causing a "global nuclear famine."

Given this scenario, Francis' assessment is correct: "Weapons of mass destruction, particularly nuclear weapons, create nothing but a false sense of security."

Yet too many of world's leaders deceive themselves and their people with talks and plans for nuclear war. We know North Korea's intentions. Trump has said he wants the U.S. nuclear arsenal in "tip-top shape" and "top of the pack."

"I want modernization and total rehabilitation."

The Trump administration has fully embraced a nuclear force modernization started under President Barack Obama that would build five strategic submarines, 72 strategic bombers and 240 intercontinental ballistic missiles at a cost of $1.2 trillion over 30 years, according to the Congressional Budget Office.

Meanwhile, the Trump administration has refused to recertify the Iran nuclear deal and sends mixed signals about the New Strategic Arms Reduction Treaty (New START) with Russia. The 2010 New START agreement gives both countries until February 2018 to reduce their deployed strategic nuclear warheads to no more than 1,550. It also limits deployed land- and submarine-based missiles and nuclear-capable bombers. Budget proposals made in the House of Representatives would stop funding of New START in 2021, restrict funding for the Comprehensive Test Ban Treaty Organization and reduce funding to work with Russia on nuclear security.

We find ourselves on the verge of a profligate arms race, and the current administration sees little to no value in international diplomacy. What a strange feeling of déjà vu — it's 1984 again, and the stage seems set for the doomsday clock to tick even closer to midnight. Except Francis has entered the stage and is calling us back to sanity.

It's good to recall that in 1988 the Bulletin of the Atomic Scientists reset the doomsday clock to six minutes to midnight. By then, Reagan and Soviet leader Mikhail Gorbachev had broken the ice on bilateral relations and set the two nations on a course of arms reduction, but they were riding a wave of public pressure. Massive anti-nuclear weapons demonstrations throughout Western Europe and North America undoubtedly influenced political leaders.

Today, U.N. member states are signing and ratifying the Treaty on the Prohibition of Nuclear Weapons. The nine nuclear states and some of their allies have rejected the treaty, but much of the rest of the global community is behind the initiative.

As with international treaties that banned land mines and chemical weapons, global citizen action will be needed. Francis' leadership gives hope that the world community acting together can influence history again.