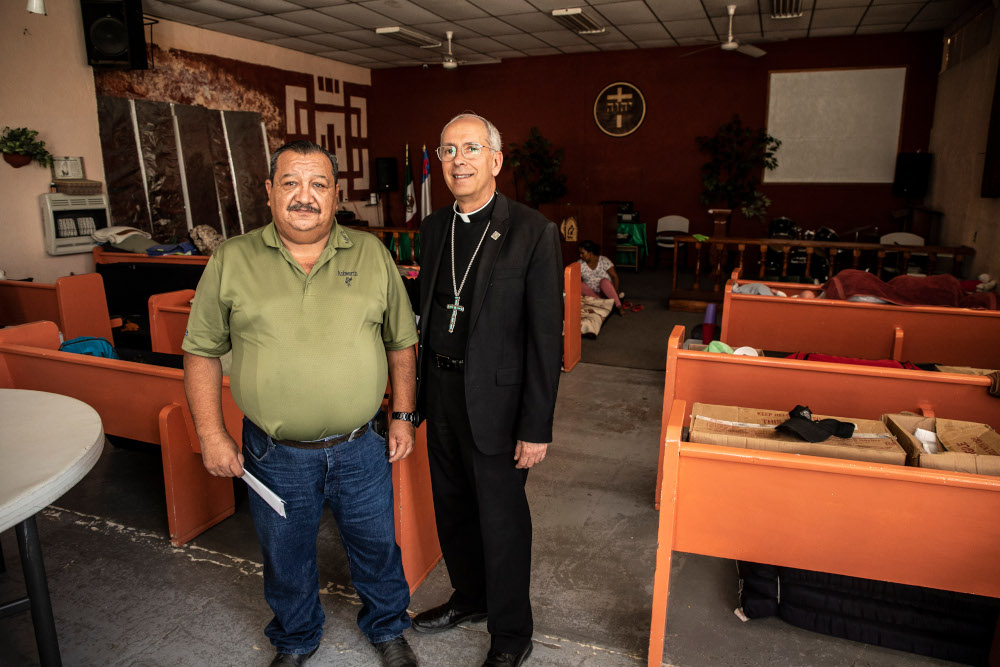 Bishop Mark J. Seitz of El Paso, Texas, visits Pastor Juan Sierro, who operates a shelter out of a Methodist church in Ciudad Juarez, Mexico, Aug. 27, 2019. Bishop Seitz's diocese donated money to his church to feed and house migrants stranded on the Mexico side of the border after the United States implemented its "Remain in Mexico" policy requiring those seeking asylum in the U.S. to stay in Mexico while their cases are considered. (CNS photo/courtesy Diocese of El Paso)

During the summer of 2019, the bishop of El Paso, Texas, decided his diocese would open a fund to help a growing number of immigrants piling into shelters on the other side of the U.S. border in the sister city of Ciudad Juarez in Mexico.

A new U.S. policy named "Remain in Mexico" blocked the migrants' entry into the U.S., telling them to stay across the border if they wanted their cases for asylum to be heard.

It set them up to wait in a dangerous environment ruled by the Mexican cartels in Juarez. The city's shelters and other spaces operated by faith-based organizations, including the Catholic Church, have since been struggling to help meet the demand created by the waiting list of thousands that the policy has created.

El Paso Bishop Mark J. Seitz envisioned a fund that might raise $100,000 over the course of a year that the diocese could donate to such shelters, neighboring dioceses and other organizations helping the migrants eat and survive on the other side of the border.

His aspiration came to fruition faster than expected when the Knights of Columbus pledged in early September to donate $100,000 to the El Paso Diocese's fund and $50,000 to the Diocese of Laredo, Texas.

"I was blown away," said Seitz in a Sept. 10 telephone interview with Catholic News Service. "I didn't solicit it, but I should have thought of that."

The El Paso Diocese was then already on its way to distribute $5,000 from about $30,000 it had raised from the fund to a Methodist shelter across the border in Juarez. The "shelter" is a local Methodist church that opened its doors, providing sanctuary to migrants, said Dylan Corbett, of the Hope Border Institute in El Paso.

On Sundays, the church operates on its regular schedule as a place of worship but serves the rest of the week as a place of nourishment and rest for the crowds of desperate men, women and children hoping to petition the U.S. for asylum.

A photo shows some of the migrants sleeping on the floor inside the Methodist church with their belongings in the pews.

"It's a beautiful ecumenical gesture," said Corbett. "This also happens to be the same shelter where one of the migrants that the bishop (Seitz) crossed over the bridge with in the action a few months ago was staying."

The Diocese of El Paso had been using its shelters and other facilities to help migrants who crossed the southern border, from Mexico into the U.S., as they scrambled to find family members or friends to stay with after the arduous journey.

But when the "Remain in Mexico" policy kicked in, the numbers of migrants in El Paso dropped almost overnight. However, that didn't mean the migrants' plight came to an end. Some estimate that between 16,000 to 20,000 migrants are now in Juarez because of the policy, said Seitz.

Some migrants who haven't been able to find safety in a shelter are living on its dangerous streets. When Seitz became involved in a widely publicized act of trying to help some families cross into the U.S. at an international bridge in June, a man in a group spoke with him, told him he'd been attacked, showed him his injuries, and asked for his blessing and prayers.

When shelters in El Paso closed because of the drop in the number migrants, the hearts of those concerned about their safety did not, and just because they weren't not coming through the Texas city in the same numbers as before, that didn't mean the problem no longer existed, Seitz said.

"We could not let go of our responsibility ... as though their suffering was not our concern anymore," Seitz told CNS. "I don't see how that could be a Christian response."

Seitz recently traveled across to visit the Methodist shelter that received the first contribution from the diocese's fund and said the diocese is looking into different ways of helping the migrants stuck on the Mexico side. They can't send material donations across because they're heavily taxed by Mexico, Seitz said, but money, including the donation from the Knights, will help feed, clothe and provide some relief for any emergency that might arise.

"We knew we'd be scratching (the) surface of the need," said the bishop.

Organizations such as the Knights help illustrate that helping during a humanitarian crisis has nothing to do with politics, Seitz said, adding that he was grateful for the Knights' leadership and that the organization decided to "take a stand for what our faith asks us to do."

"We're very proud of the courage they've shown, stepping up" in a way that Gospel asks, he said. "Faith isn't just an abstract kind of thing but lead us into action."

Fernie Ceniceros, communications specialist for the Diocese of El Paso, said helping others and receiving the gift from the Knights as El Paso deals with its own trauma following a mass shooting in early August has been "a very bright light in a hard month."

"We encourage people to donate to this fund because it is helping as best as we can," Ceniceros said. "They are refugees trying to do their best in the worst of a situation. We're calling on people to look into their hearts and to do what Jesus calls us to: to charity, to give to those who don't have anything ... so they can at least have a warm meal."

The diocese has a link on its website to donate to the fund at www.elpasodiocese.org.