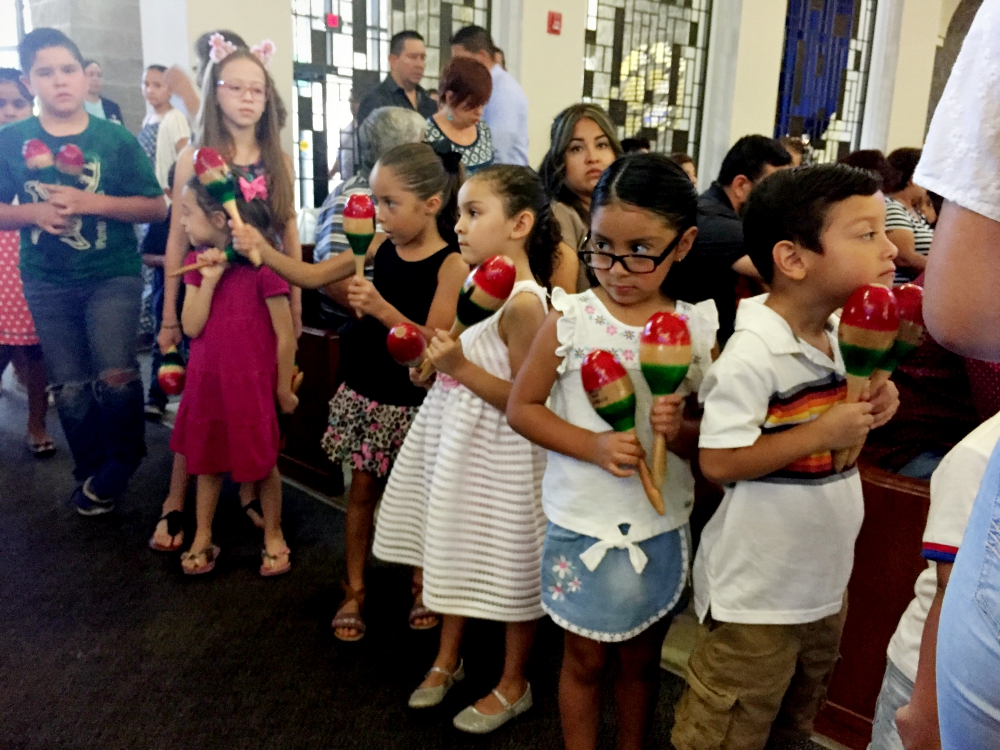 One of the largest and youngest parishes in the El Paso Diocese, St. Mark Catholic Church, mirrors the rest of the city in Texas: 85 percent Hispanic, largely bilingual, and home to mainly Mexican-Americans with ties across the border in Juárez, Mexico.

Just outside the church is a 30-foot statue of Our Lady of Guadalupe, which came from Guadalajara, Mexico, and is surrounded by a towering wall and waterfall. Inside the church is the "Missionary Jesus" statue, draped in a thin quilt with fabric from various countries. At Sunday's 12:30 p.m. Mass in August, children with maracas led the procession.

"Maybe to the East Coast, this is a Hispanic parish," said Fr. Arturo Bañuelas, the parish's pastor, regarding the church's makeup and traditions. "Here? It's just a parish."

That is, one with 7,200 people attending Mass every Sunday.

This summer, St. Mark celebrated its 25th anniversary, but the past three years with Bañuelas as pastor have been its most defining, parishioners said — from a pious parish with evangelization as its core, to an active, missionary community.

It was a sleeping giant, said the Mexican-American priest. "People were hungry."

"If we move this building out of here and put it somewhere else, would it make a difference in this community, in people's lives?" Bañuelas said. "If it did, we're credible. If it didn't, then we're not credible."

Tapping into the stifled desire for action, he encouraged parishioners to form ministries that address the needs of both the church and the greater community. And while most parishioners may have a Mexican heritage, those who aren't fluent in Spanish or share that background might struggle with their kind of worship, and vice versa, he said. "That's where our ministries come in."

Now, St. Mark offers its parishioners 70 ministries. (Before Bañuelas, the parish had about 10.)

Like a high school where everyone belongs to a club or extracurricular activity, its parishioners all seem to lead or belong to one or more ministries, continuously recruiting one another and competing for gathering space on campus. With so many people coming in and out, there's no need to ever lock up the place.

One woman, Marta Garcia, flipped through a ministry brochure as she sat in the church's community center, where the ceilings are lined with banners that represent each ministry at St. Mark. In this space, ministries alternate hosting lunch as a fundraiser.

"I have no idea what I want to get involved in," she said, having joined the parish just a couple weeks prior. "But I'm coming in on Thursday morning, and I'll find something."

One ministry is geared toward accompanying immigrant children in detention, while another is for visiting the ill or elderly at their homes. The ministry devoted to those with special needs helps find activities for them, such as getting involved in Special Olympics or being ushers at Mass. The coordinator, Mariquel Cervantes, is working on establishing a tradition where, once a year, a child with special needs will deliver a sermon on what it's like to be a person with disabilities.

The church also has a young adult group and a youth group, a group that offers English-language classes, 11 liturgical ministries — including one specifically focused on celebrating feasts for Our Lady of Guadalupe — and 11 service/outreach ministries.

"Every ministry has to have one retreat a year, so maybe you hook them with a retreat, and once they get in there, they just open their eyes and hearts and get busy," said Eileen Williams, who leads the JustFaith ministry, a spiritual program that invites personal transformation. "They want to integrate their lives — not just sit in the pews." 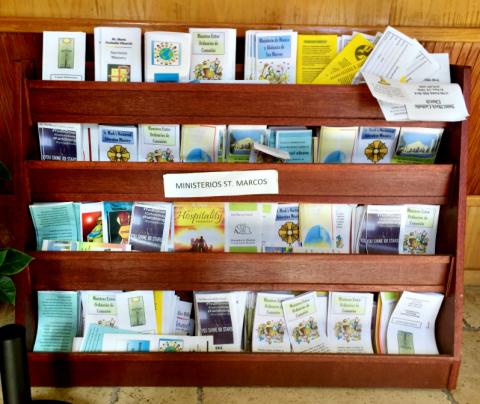 "Sometimes, I leave here around 10 at night and think, look at this crazy church with the parking lot still full," she continued. "Do these people ever go home?"

The key to keeping strong numbers and interest, Bañuelas said, is having trained leaders. That's why in 1988 he founded Tepeyac Institute, where those who partake in ministries have to complete a six-week program. "It was developed as a way of standardizing the ministries, so that people can do the same thing every year," said Deacon Jesus Cardenas, who directs the institute.

The parish hosts yearly ministry fairs to attract new leadership, and instead of a parish council, St. Mark has a ministry council where leaders get to vote on parochial issues.

"Just because we love Father Arturo doesn't mean we always agree on things," Williams said. "It doesn't mean he gets to decide yes or no. We get to vote. We're a voice here, and he respects us."

St. Mark belongs to the most populous zip code in the country and is home to 9 percent of the diocese's Catholics, Bañuelas said. With the diocese continuing to grow eastward, where the church is located, there are enough people to fill two more parishes, he added — just not enough priests.

Despite not having an affiliated school, 2,500 families belong to St. Mark, and 4,000 children are enrolled in the religious education program.

You don't have to be out converting for people to feel the mystical aspect in a missionary approach, Bañuelas said. "Priests were not in tune with that, but now we have a lot of Hispanic priests, and there's a growing sense of our place in the church. And that's why I think the Hispanic church is growing: We're tapped into that mystical part where we know God in the 'dailyness' of life. We pray everywhere, and then church reaffirms that, so you can go live the rest of the week in your faith."

That St. Mark is located on the border, he added, brings with it a confluence of cultures and languages. And this community sees that confluence as a "gift that binds us, not as a difference that divides us.

"To be in a parish with such diversity and acceptance of other people's differences as blessings, you can do a lot with that; you can move it," Bañuelas said.

When parishioners are engaged in missionary projects through their ministries, they come back to him eager for more theological formation, wanting to learn more about the church and its traditions "because now they're on fire," he said. "Now they've got this excitement about their Catholicity. 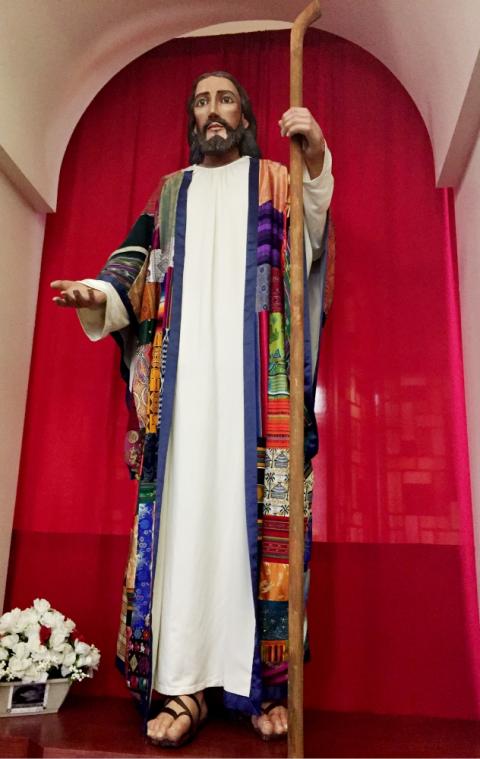 A quilt robe on St. Mark's statue of the Missionary Jesus is made up of pieces of fabric from multiple countries. (NCR photo/Soli Salgado)

"I think before, when you had the church being so pious, the focus was, do you know your Catholic identity? And the response to that was, well, I pray the rosary, and I go to Mass, and I do my devotions, and, somehow, that's my identity because non-Catholics don't do that. But now that we've seen Vatican II, Pope Francis, and Aparecida, it's our Catholic identity plus our credibility."

Cesar Martinez, a 27-year-old parishioner who now leads the music ministry, said that when he was part of the young adult ministry, "we weren't taught how to pray. We were taught how to take action."

Last November and December, that action was manifested in the community center, which was transformed into a 24/7 immigration shelter. And throughout the year, Ministerio RICO (Refugio Infantil Comunidad) hosts detained unaccompanied minors in a small building next door to the church, where they have catechesis, eat breakfast, attend Mass and reflect.

The kids are between 5 and 17 years old and are typically from Guatemala, Honduras or El Salvador. Alone in the United States, most either fled gang violence or are hoping to provide for their families back home.

Named after Bañuelas' nephew Rico, who was killed in Mexico, the ministry is meant to maintain a constant for the children that reminds them of home: their faith.

"Most of our members are people who were born in Mexico and are here legally, but they understand the pain and suffering that occurs coming from Mexico to the United States," said Ivan Avila, who helps coordinate RICO with his wife.

"Even though you have papers in line, you still go through the same discrimination, our out-casting, per se. We all try to get in their shoes, and that's how our members get motivated to help."

Bañuelas said that Francis has enhanced the call for solidarity at St. Mark, a place where anybody from any community can feel at home, whether gay, non-Hispanic, divorced or non-Catholic. One man who is non-Catholic started coming to St. Mark when he dated a parishioner, and continued attending Sunday Mass even after they broke up, because he loved it.

The parish's approach to the V Encuentro reflects that. The grassroots process is intended to elevate Hispanic voices in the Catholic Church, beginning with conversations in parishes and ending on a national stage in 2018.

But because Hispanics are already the parish's prominent voice, St. Mark is looking for others, whether in the black community, or divorced individuals who have strayed, or homeless people in the community.

With 70 groups having only 12 rooms at St. Mark available for meeting, blueprints for expansion are already underway. A bookstore, an enlarged front office, a conference room and four more classrooms will be added to the existing community center. Someday, Bañuelas would like to add a school, too.

"We don't push a Hispanic agenda," he said. "We just push a pastoral agenda that responds to people's spiritual needs."